These days, every big company wants to get into universes and brand expansion. Big movie studios want to turn everything into a cinematic universe, while game companies are looking into more and more new ways to utilize their IP’s outside of their normal games. Just look at Nintendo with the Mario movie and ventures like Mario + Rabbids.

Riot Games created League of Legends, one of the most popular video games in the world. The MOBA (Multiplayer online battle arena) features over 150 playable champions, an expansive lore covering numerous nations and time periods, and one of the biggest esports scenes out there. Riot, sensing the same thing these other companies have, looked to expand their powerful brand in new ways. Just recently the fantastic Arcane animated series made its debut on Netflix, and Valorant took the established world and wrapped it around a Counter-Strike-type game. One of the big new ventures was actually announced last year and was set to come out earlier this year: Ruined King: A League of Legends Story. 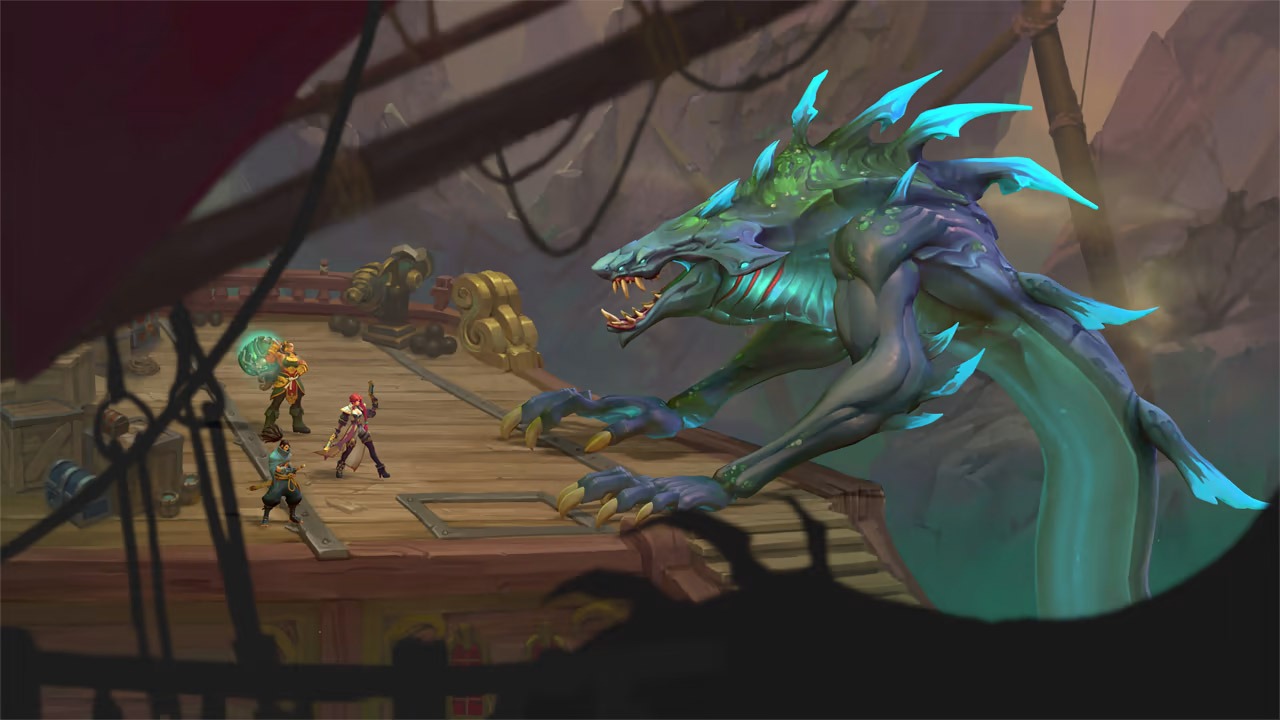 The game is a single-player turn-based RPG that was originally poised to set up the Ruination event; a huge, multimedia story that involved all of Riot’s games, as well as animated shorts and comics. Of course, a certain real-world virus threw a wrench into all of these plans. The Ruination event was less than what people were expecting, and, even worse, the tie-in game went radio silent last December, missing its predicted launch window without any updates. Fast forward to November of 2021, and Riot Forge, the indie publishing arm of the company, surprisingly announced that Ruined King would be dropping. So after a long wait and the event it was supposed to set up already wrapped and gone, how does Ruined King: A League of Legends Story hold up?

Developed by Airship Syndicate, the makers of the delightful Battle Chasers: Nightwar, Ruined King tells the story of the Black Mist, a mysterious evil force. The game takes place mostly in Bilgewater, a harsh pirate city, and the Shadow Isles, where the Mist comes from. The opening cutscene tells the tragic tale of Viego, the titular Ruined King. The Blessed Isles hosted a magical water that could heal any ailment, so after the king’s beloved bride died, Viego slaughtered his way to the magic spring to heal his wife. She came back, but wasn’t happy about it, and after impaling him with his own magic sword, the springs burst forth with the Black Mist.

Now, the Mist finds its way from time to time in nearby Bilgewater, which locals call the Harrowing. The Mist corrupts mortals and unleashes evil monsters. This is on top of the already tumultuous political dealings of the city. 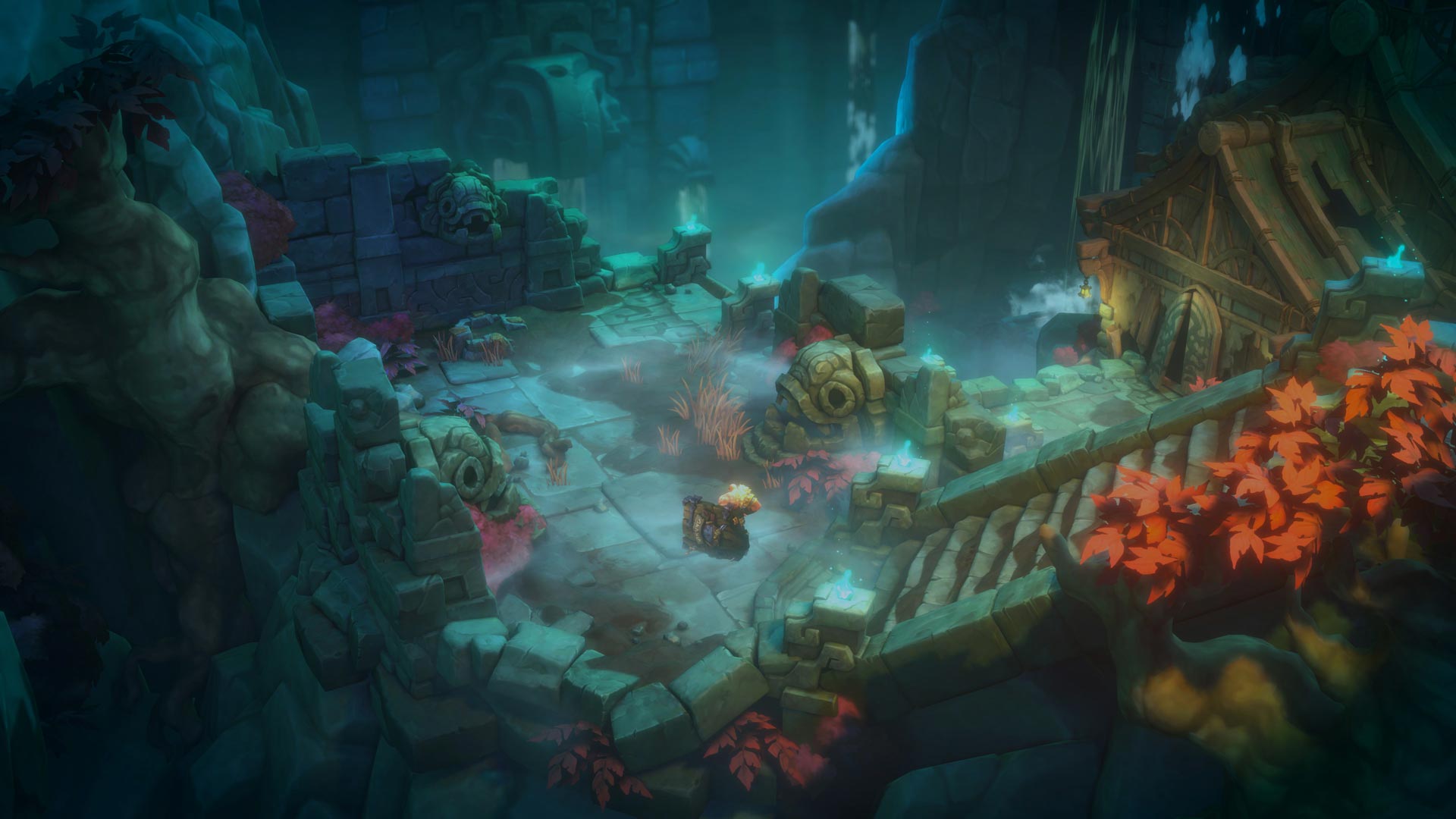 The game finds players in control of a party of six existing League of Legends champions. It includes well-known and popular ones like Ahri, Yasuo, and Miss Fortune, but, to my delight, also includes Illaoi and Braum, my two favorite LoL characters who have never been super popular. They come together with their own motivations for venturing to the Shadow Isles. Some characters get to have more important arcs in the story, while others, like Braum (unfortunately), are mainly there to round out the cast and don’t offer much to the story. Still, it’s fun to see these characters interact with one another, and while the story isn’t too deep, it’s still a fun bit of fantasy adventure.

A PIRATE’S LIFE FOR ME

The game is set up as a fairly standard RPG. There are cities to explore, as well as various dungeons full of environmental puzzles and baddies to fight. The maps you explore remind me a lot of the fantastic Divinity: Original Sin II, with an isometric viewing angle and lots of pots and barrels to check for treasure and crafting elements. Once you enter a battle, your team of three face off against a number of bad guys using a wide swath of techniques and tools.

This game is chock-full of systems to keep in mind. Each character is hugely unique, using passive and active abilities pulled straight from League of Legends. For example, Braum’s attacks add stacks of Concussive Blows that can stun enemies after enough attacks, and Yasuo’s crit attacks give him a shield. There are also numerous special attacks and abilities. Most of these do not happen immediately — once you select a special ability, it falls onto a timeline showing the turn order. There are three “lanes” – a speed lane that makes the attack come faster but weaker, a power lane that is the opposite, and a balance lane that splits the difference. Much of the strategy in the game comes from these lanes. Sometimes it might be better to use the speed lane to let a character go before an enemy to defeat them before they can attack, or shield someone before they are hit. There are also special spaces on the timeline that can either buff or debuff your heroes, so utilizing the lane system can help you plan around the zones. It’s a simple but brilliant addition that makes it feel fresh, even if you’ve played numerous turn-based RPG’s before. 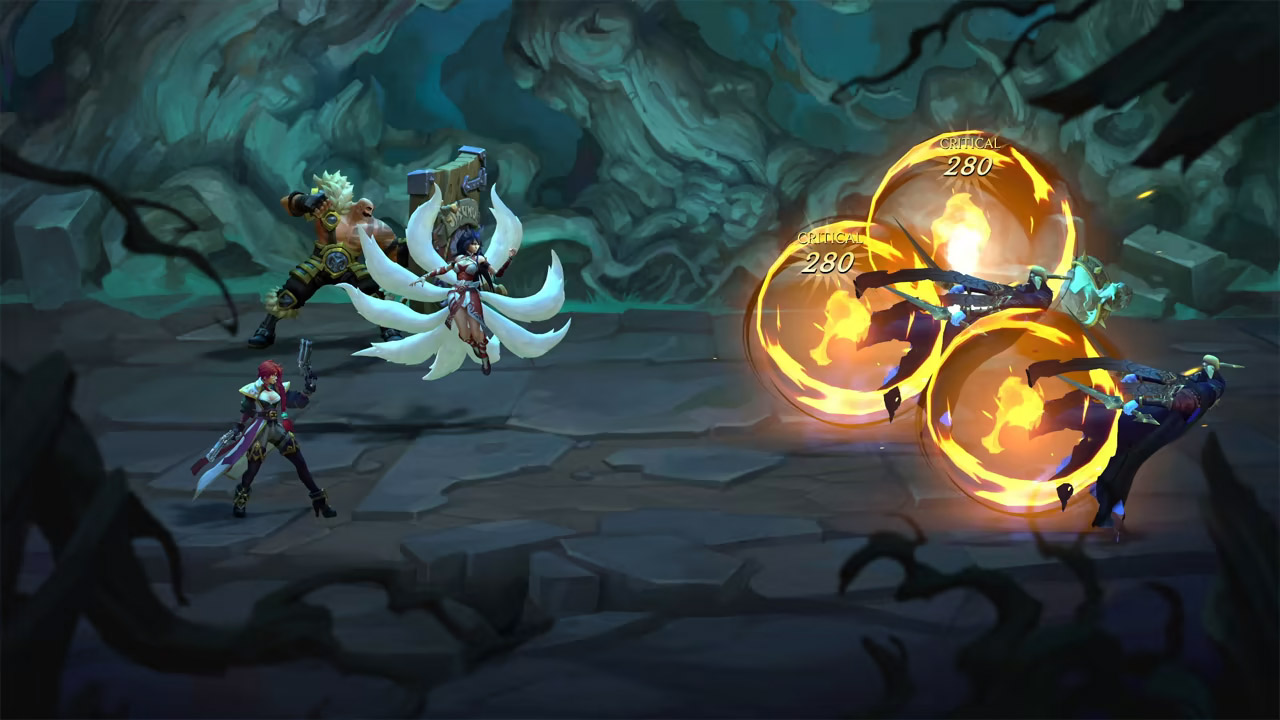 On top of the battles, there are a number of customization options. While stats are raised automatically when leveling up, you get full control of other aspects of the characters. There are Runes that let you focus a character’s role. For instance, Illaoi could either strengthen her heals and tankiness, or her damage. There are also small skill trees for each combat ability, making you choose between something like increasing crit chance or doing more flat damage. There is also of course gear of all types and rarities, and the ability to enchant those items. What I’m getting at is that even though this isn’t the biggest or longest RPG, there is no shortage of depth or systems to get lost in.

Exploring the worlds and dungeons is pretty enjoyable as well. Each character has their own abilities to use within dungeons, like Illaoi’s ability to read Buhru text. The dungeons aren’t anything too wild, but it’s very satisfying to go through solving the puzzles and ending with a fun boss with some unique mechanics. Sometimes a classic RPG dungeon can be very relaxing. 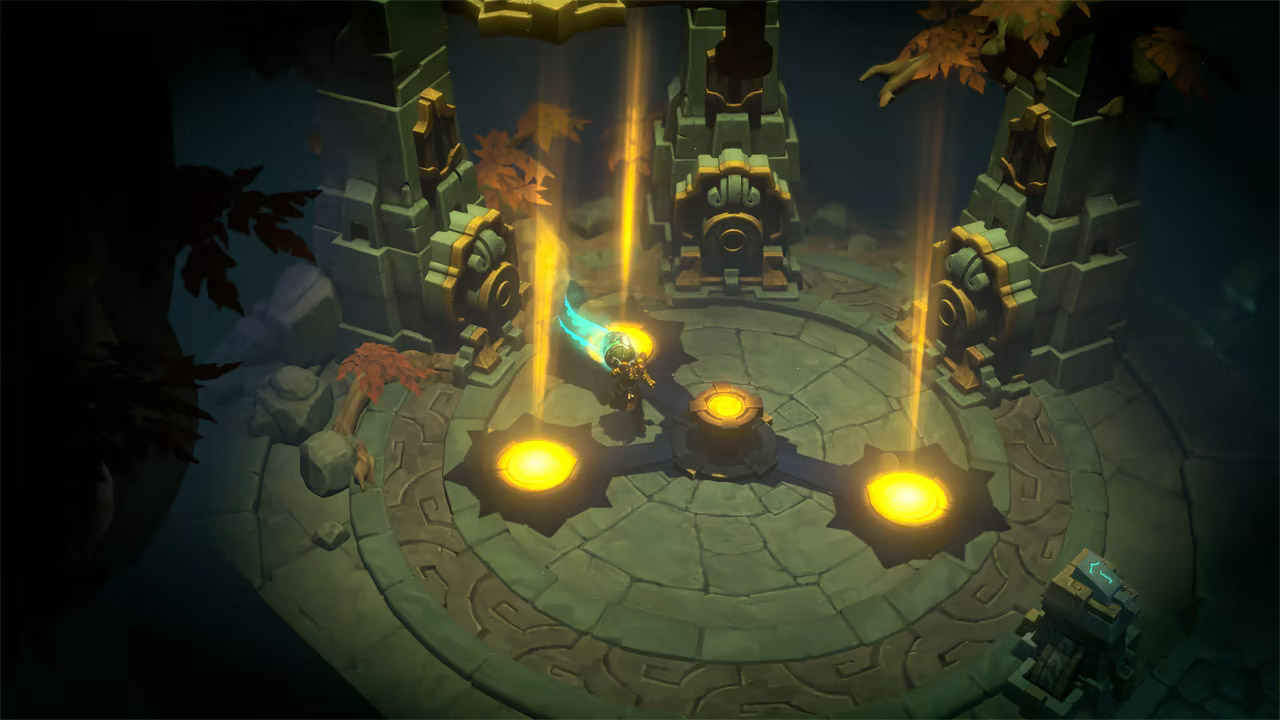 Performance on the Switch is overall fine. It’s a bit muddy in handheld mode, but nothing unplayable. If the camera pulls back too much, or there is a lot of action on screen, there can be some slowdown. There was one instance of weird performance in my playthrough where a giant spider appeared and for a few seconds before the battle started the framerate dropped to about two frames per second. It was brief and more funny than annoying, but it was still odd.

The worst aspect of the game is the load times. On the Switch, there is a several second loading screen a time you move from one area to the next, and it can be grating. If this was something that could be alleviated by an update, it would improve the game immensely.

One of the highlights of Ruined King is the presentation. This may have been developed by an indie studio (with the backing of Riot of course), but it looks and sounds better than many big studio games. The backgrounds are layered and colorful, and the animations are fluid and elaborate. Most cutscenes consist of character portraits speaking to each other. There are also motion comic-style cutscenes drawn by legendary Battle Chasers artist Joe Mad. If I have one complaint about the art, it’s that I wish the character portrait cutscenes had different expressions for the characters, but they each only have one portrait used in all the scenes. I would have liked different portraits for different emotions, but it’s a minor complaint. 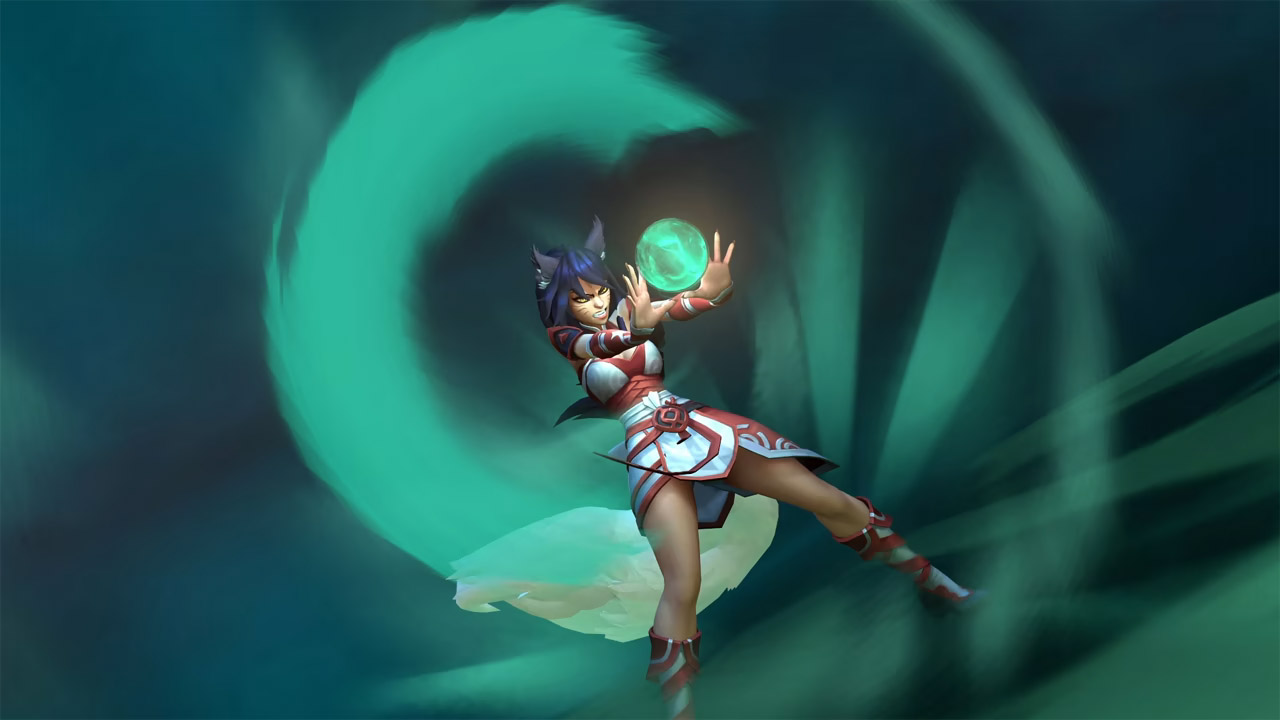 What really sells these dialogue scenes is the sound. The music, like much of Riot’s work, is great, with sweeping melodic scores and intense battle themes. Even better is the voice acting. There are recognizable actors like Laura Bailey as Miss Fortune and Liam O’Brien as Yasuo, and Luyanda Unati Lewis-Nyawo and JB Blanc are standouts as Illaoi and Braum respectively. The voice acting sells the story, which is serviceable if not a bit predictable. Overall, the presentation is the icing on the cake that is the beefy gameplay hooks.

Ruined King: A League of Legends Story was absolutely worth the wait. If you like the characters of League of Legends but don’t enjoy playing League of Legends (a fair opinion), this is a great example of strong character design transcending genres. This game makes these characters feel similar to their LoL counterparts while feeling unique in their own right. The battles are engaging and the sheer amount of customization between gear, Runes, and abilities will leave any RPG fan satisfied. Even if you have no experience with League of Legends, this game is a fantastic pick for anyone itching for a solid single-player game. 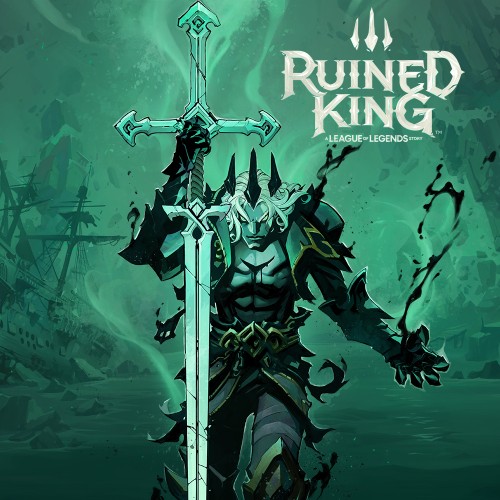