The Pokémon series has managed to deliver five distinct RPG adventures across three generations on the Switch. That’s more than any other system before it, all in under six years, with impressive sales numbers fueling each of them. Even if we discount the Ilca developed Gen IV remakes, you’d think that proclivity and experience would make each entry more consistently impressive than the last.

In some regards that’s absolutely true. Pokémon Scarlet and Violet, the debut titles in the unstoppable franchise’s ninth generation, have stepped even further away from how their predecessors did things. Routes are replaced by one continuous region, the plot has been split into three separate progressions, and locking eyes with a fellow trainer doesn’t equal an instant battle. These and other alterations show (to many, long overdue) “growth” for the series.

Unfortunately, there are just as many stumbles as there are strides – the majority related to the games’ technical performance. When compared to other expansive RPGs on the Switch and even older Pokémon games, Gen IX is not off to the smoothest start. If one’s willing to overlook those flaws, there’s still joy to be found on the road to be the very best in Paldea. 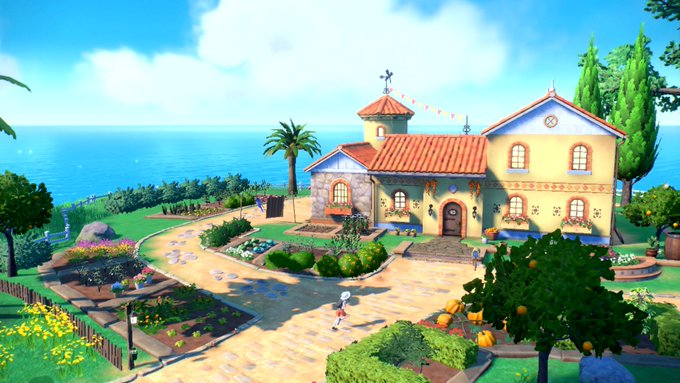 Don’t let that cautionary introduction completely fool you, though. Scarlet and Violet do deliver on certain fronts quite well. Most apparent is the open world nature of the games, or rather the freedom that comes with such a system. In my first ten hours with the game, I managed to pour over multiple sections of the map and catch dozens upon dozens of Pokémon. Yet I only had two Gym badges, had taken part in just a handful of trainer battles, and had barely encountered the villainous “Team” of the game. I’d almost completely honed in on my favorite aspects of the franchise while avoiding the ones I found tedious, and that sort of tailoring is appealing for sure.

It does come with some pitfalls, like a lack of level scaling that doesn’t quite translate to a turn based RPG. In a more actionized game, such as Breath of the Wild, encountering a powerful enemy or dangerous area was an opportunity to be stealthy or to put your limited options to the test in pursuit of greater rewards. With ScarVi, it just means running while being unable to engage with high level Pokémon outside of trying to catch them, and if you do manage that they’re liable to disobey. It’s the same system as the older entries in the series, but without the “route” and story based gatekeeping that ensured your linear power growth.

So yes, you can venture into further corners of Paldea, but that accessibility doesn’t always “fit” within the confines of the genre. This is redoubled by the absence of some of Legends: Arceus’ systemic and design decisions, that in retrospect feel more complimentary to that game as a whole. 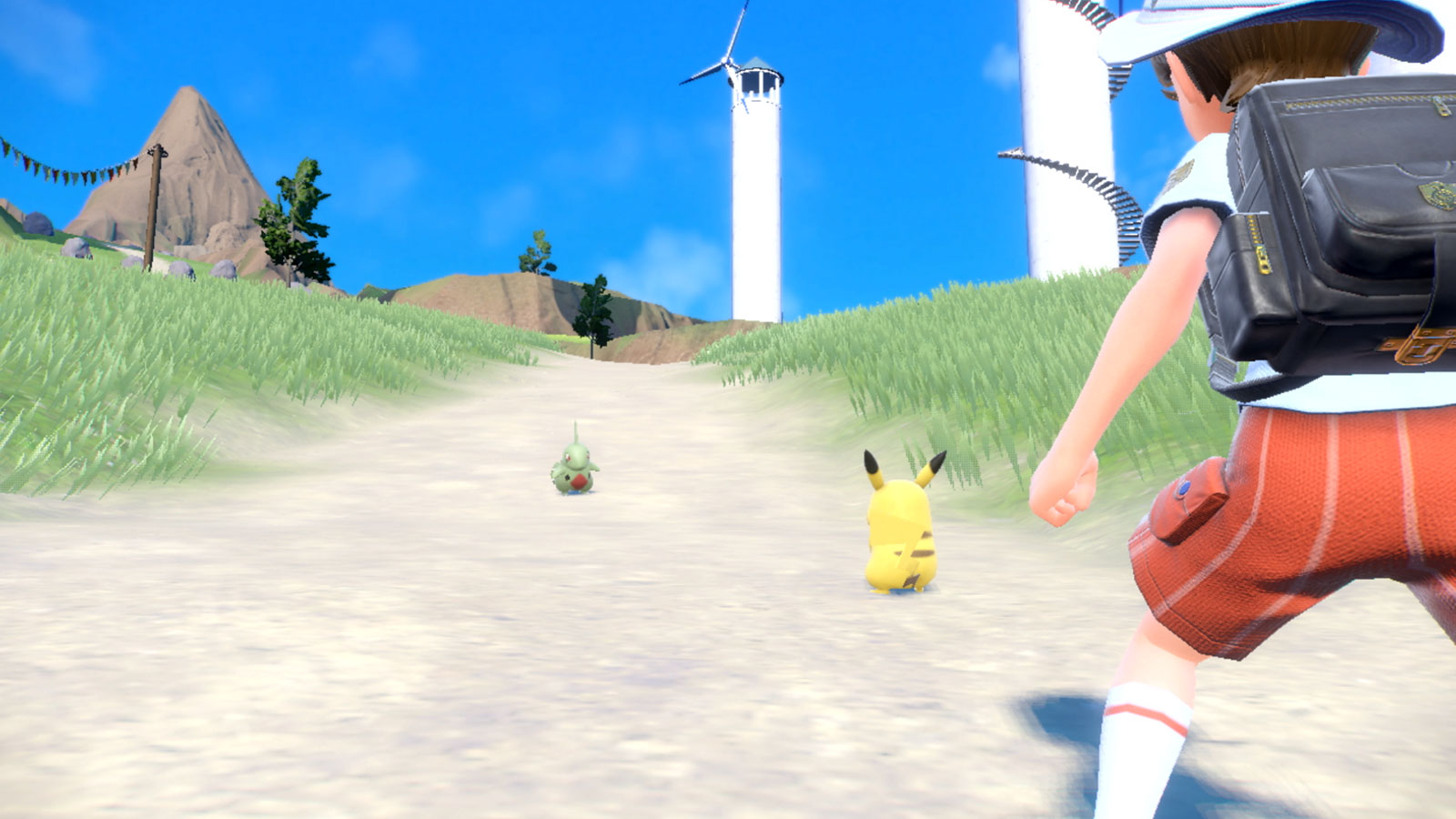 There’ll be more opportunities to compare Scarlet and Violet to their immediate predecessor soon enough, but first there are other aspects unique to Gen IX worth celebrating. Chief among them is Paldea’s additions to the now over one thousand roster of Pokémon species. There’s an evident amount of care put into the designs of the games’ starters and box legendaries. Sprigatito, Fuecoco, and Quaxly get opportunities to shine in the early game (and will no doubt remain popular well into the future of the franchise); however it’s Koraidon and Miraidon, depending on your version, that feel like your true partner.

I appreciated this connection and utilization of the legendaries for a few reasons. For one, there are plot threads related to them that come up in a few of the games’ story paths. They also get to display personality at various points, both in cutscenes and in their movements and animations. Functionally they’re your means of transportation throughout Paldea, giving you a whole adventure or three to connect with them. Past games relegated legendaries to looming plot elements and late game encounters, so being able to “have” one without it being a balance tipping, battle ready Pokémon was a smart move.

Beyond those, the other newcomers offer up a great blend of conceptual ideas, gimmicks, and typing combinations. After all these years we finally get a dolphin Pokémon, and yet it goes in a direction I never would have imagined. There’s a Grass/Fire type, a Steel/Poison type, Fairy/Fighting; and other similar mixes that fill previously open niches in the decades old classification system. No matter your tastes, there’s sure to be something here that suits you. That includes the handful of new evolutions and regional forms that weave their way in, as well as a more spoilery topic that I’d equate to Alola’s Ultra Beasts. That’s to say, they feel “separate” from the rest of the Pokédex and it’ll be interesting to see how they end up justified in the future. 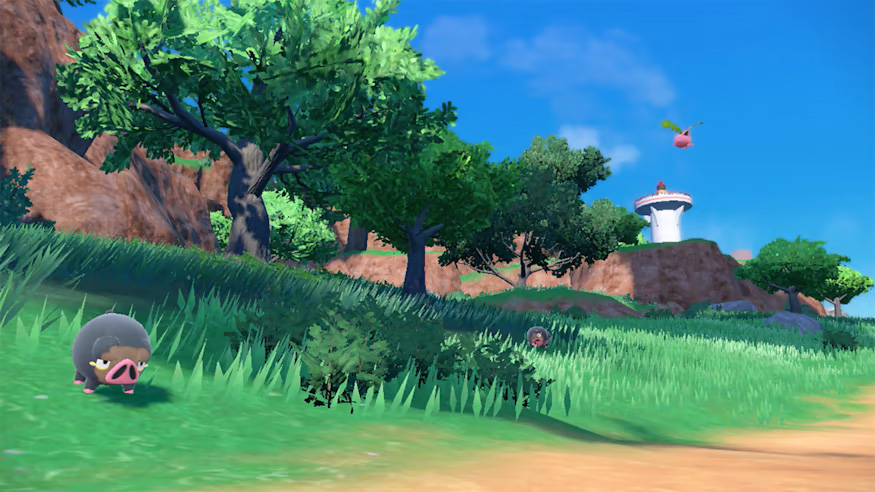 Talking typing, Scarlet and Violet’s ‘unique’ gameplay mechanic – think Z-Moves and Dynamaxing – manages to do what those two examples (in my opinion) never could. Terastallizing actually manages to elevate the battle system by allowing Pokémon to adjust their typing. It’s such a simple idea on the surface, to the point the game introduces it simply as a means of increasing a Pokémon’s attack power. It can certainly do that, but it inherently opens up tons of possibilities on offense and defense, the discussion of which are well beyond the scope of a review. I’m actually excited at the prospect of what the competitive meta will be in the wake of this addition, and how it’ll be utilized for events and Mystery Gifts going forward.

Finding Pokémon with complementary or unique Tera types is chiefly done via Raid Battles, which have been streamlined compared to Sword and Shield’s take on the idea. Most apparent is their comparative quickness, with attacks and effects happening simultaneously per side as opposed to on a Pokémon to Pokémon basis. Most of my map based exploration was fueled by daily cycling Raids, prompting me to set out to see what could turn up randomly. Paired with the fact all other Pokémon encounters are visible on the map again (as they should be), it’s a collector’s dream to see what possibilities await this time around. 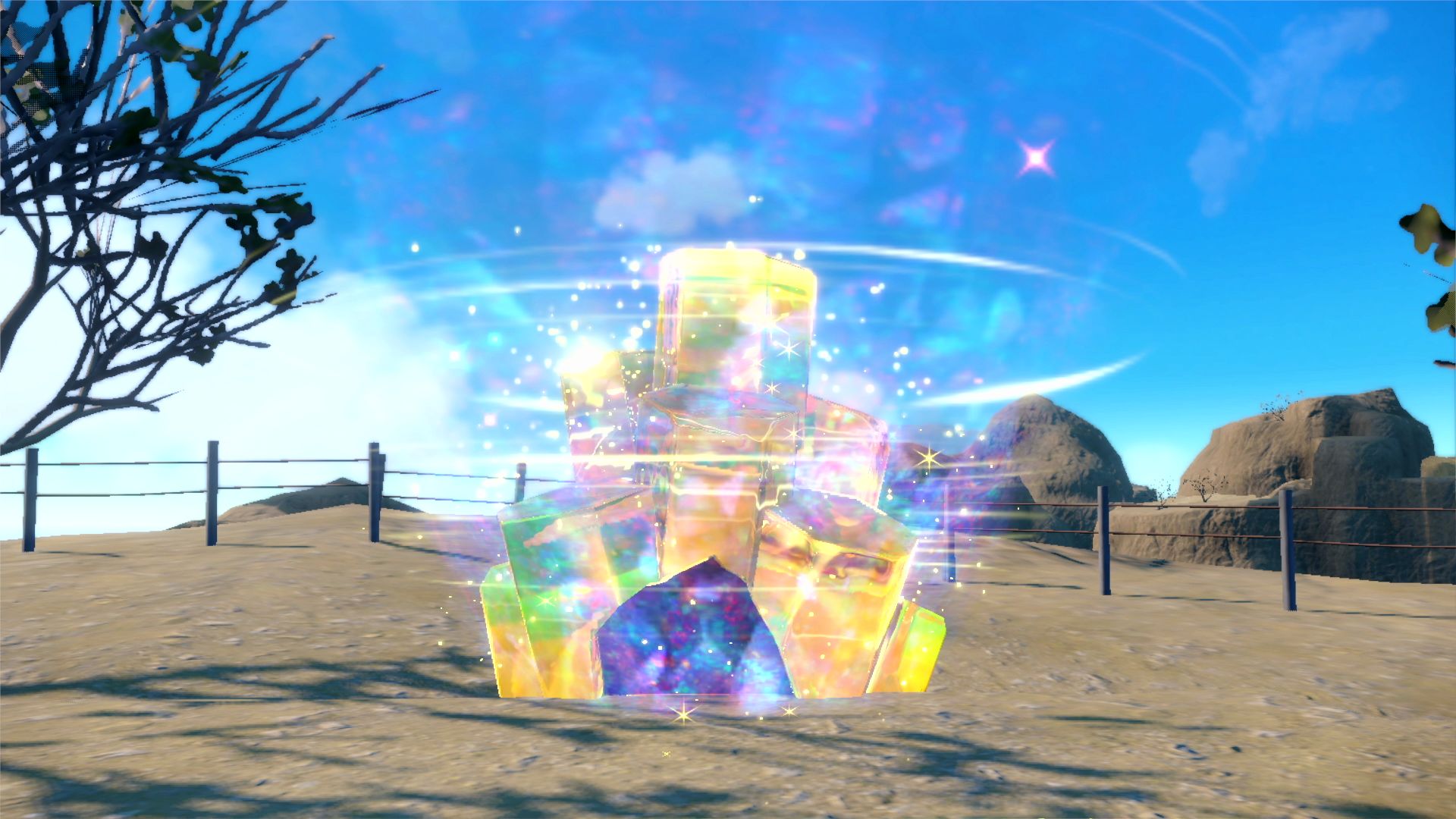 There’s also a new take on letting your Pokémon adventure alongside you with the Let’s Go! option. This lets your lead Pokémon out into the world, where they can pick up items and pick fights with wild Pokémon. The latter is definitely welcome, letting you sent your buddy into a grouping of wild Pokémon where it’ll get to work. It’s a reduced experience yield, but it still makes leveling and gathering TM crafting materials a much less time consuming task than they need to be.

Those all stand as the main positives to these latest Pokémon journeys, with other little touches and the familiar (perhaps at this point nostalgic) joy of raising and collecting Pokémon further elevating the experience. Sadly though, those highs are pulled back by some unavoidable lows. 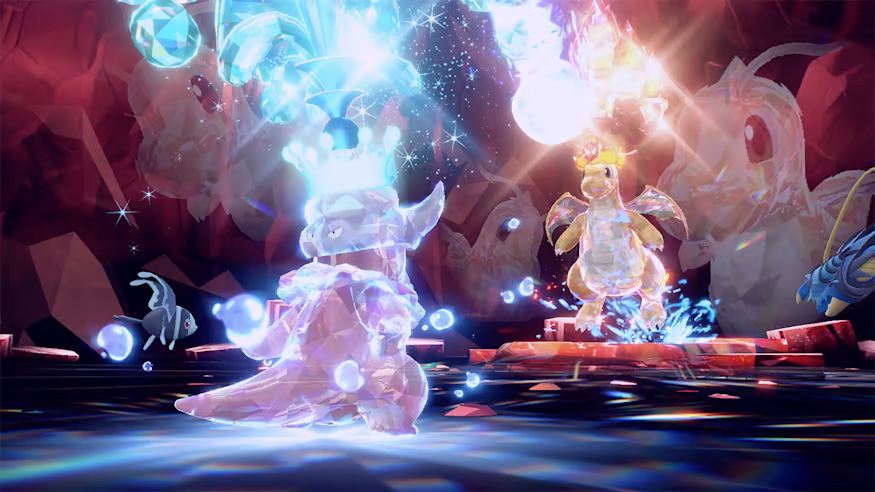 This, unfortunately, brings us to some of the more glaring faults with Scarlet and Violet.

I’d cite two in particular, which doesn’t sound like a lot, but they’re both so interwoven into the experience that they’re impossible to avoid from the moment you set foot out into the game world. Frankly, Paldea is boring to look at. Its open expanses are sparse, with only the Pokémon and items dotting the land serving as attention getters. Towns don’t feel all that impressive, and while key character designs (particularly Gym Leaders) range from solid to outstanding, background characters are much more plain and much less expressive.

There just isn’t enough variety or set pieces to give this open world life, with what’s out there being marred by simplistic textures and frequent, glaring pop-in.

That last point ties into the other main fault here. Scarlet and Violet do not run smoothly on a technical level. It’s all too easy to encounter lighting glitches, objects and characters disappearing from view, glimpses into the voids beyond the environments, and hits to the frame rate. While not “constant”, they’re universally present and so frequent that a lack of quality is the prevailing perception. Whatever the cause of this, it’s an undesirable state for any game to be in, let alone a tentpole holiday release from one of the world’s biggest brands and arguably the most beloved video game publisher ever. 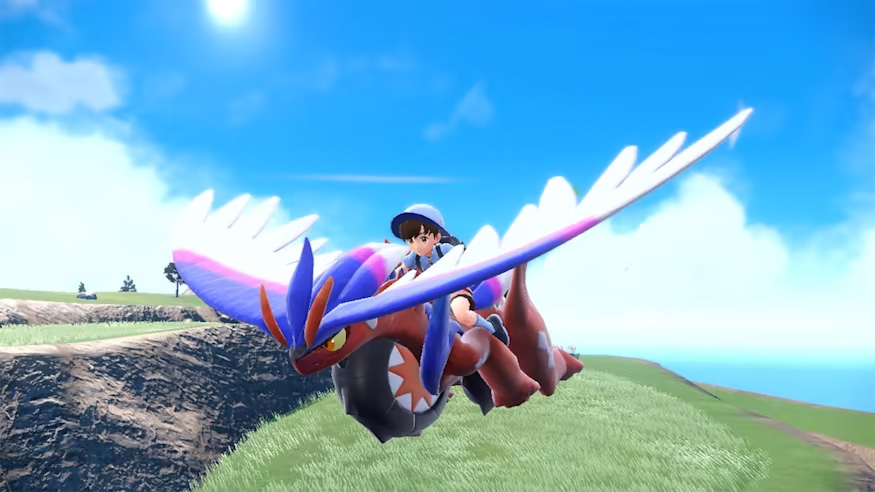 It’s not hard to find deeper, more technical insight on the games’ current state. I can only speak personally and anecdotally. Ultimately I have been, and will continue to, enjoy Violet. But I also can’t say that it’s in a good state, particularly when these sorts of issues weren’t nearly as present in fellow main line games Sword and Shield, or the similarly ambitious Legends: Arceus.

Other detriments to the experience are less fundamental, but still felt. Character customization has taken a decisive blow, limiting your wardrobe to the games’ school uniform aesthetic and a few accessories. Hats in particular feel… off, and the amount of options for things like bags and shoes feel sparse. That’s in contrast to what might be the most robust selection of hairstyles in the series, and the newfound option of Rotom Phone cases. 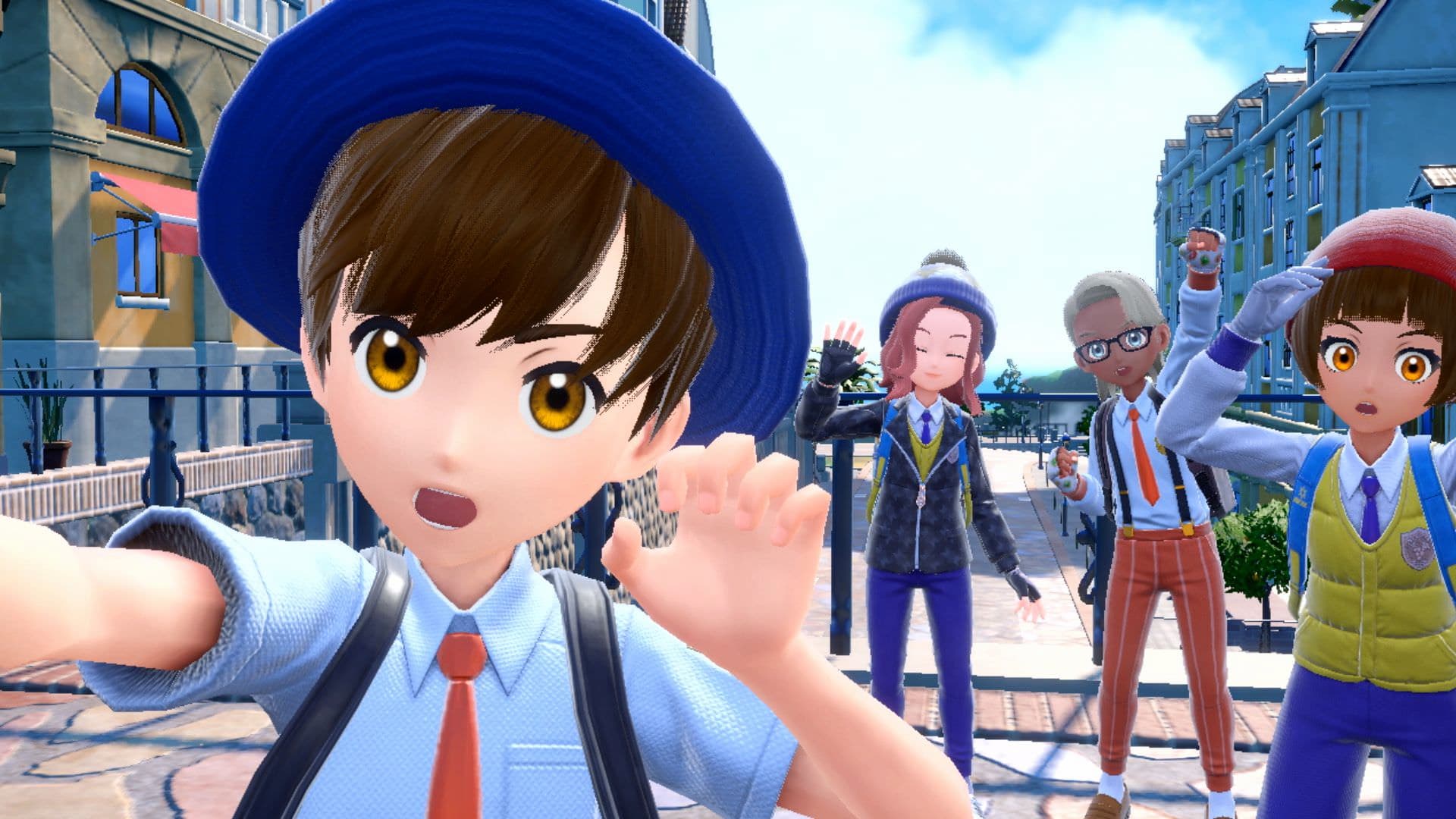 As touched on earlier, some of the more convenient aspects of Legends’ makeup are no longer present. That’s to be expected due to the present differences, but it’s most felt on perceived quality of life elements. Battles and menus aren’t as snappy, for example, and it’s no longer possible to catch Pokémon freely in the wild without battling them. It may be unfair to compare these two styles, but I’d definitely love to see those features make a return in some way down the line.

Pokémon Scarlet and Violet have already sold millions, and Nintendo has given at least indication that performance improving updates are on the way. I’m eager to see what a smoothed out Gen IX experience will be like, but even with perfect performance there would still be issues keeping this from being my favorite Pokémon game on the Switch. The bland environments, loss of clothing options, slower pace, lack of voice acting (though they all have that problem), and removal of certain quality of life features leave a game that doesn’t always feel like a bold future for the franchise.

Yet when it does embrace growth, and maintains signature aspects in new ways, it does shine as the blend of past and future this duo aims to be. The familiar story beats are there, but they can be chased freely. Paldea’s Pokédex is a blend of multigenerational favorites and a likable collection of new additions. Ideas like Terrastalizing and the Let’s Go! mechanic add new layers to battling and raising Pokémon. If there were ever a pair of these games that need a third version it’s these two, because with a little more time to develop and some fine tuning of what’s already here, Pokémon Scarlet and Violet could supplant Legends when it comes to the best of the series on Switch.