To take a franchise like Pokémon and make it feel new again likely felt impossible. Efforts like Colosseum gave it a try before having those concepts drop away, and while GO redefined what Pokémon is to many, it really hasn’t changed much for fans of the console games beyond the Let’s Go! duo. The series was in need of its own shakeup, and thankfully that’s been the Switch’s MO since its first year.

I’ve said it before and will say it again: the Switch is a console where every Nintendo brand can be reborn and renewed. Breath of the Wild did it for Zelda day one. Super Mario Odyssey managed it the same year. The hits keep coming, and after a fair few efforts it was on GameFreak to do the same for our favorite Pocket Monsters. 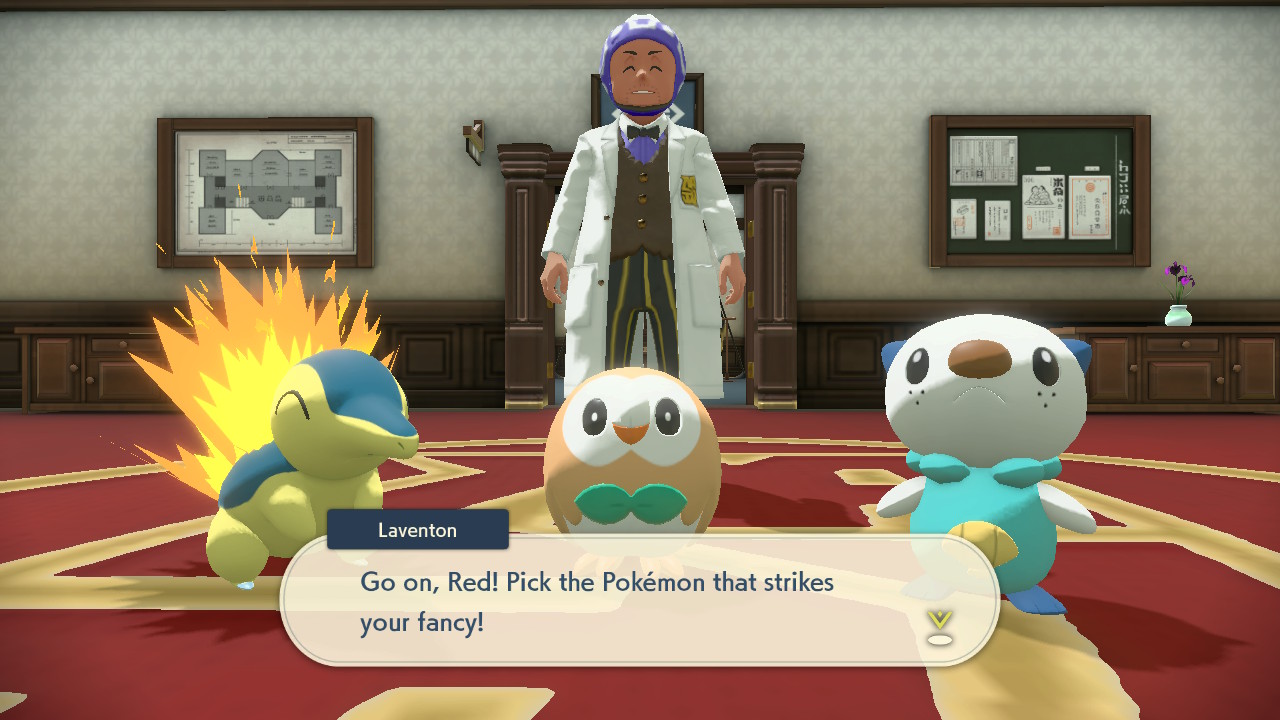 Speaking plainly and upfront, this game is very good in many ways. It can feel preliminary as well, something of a conceptual step in a very good direction. That it still manages to be enjoyable, uplifting for the series, and compelling to dive back into again and again despite a few rough edges is a testament to its potential. Every core Pokémon title on Switch would get my recommendation, but Pokémon Legends: Arceus is a must play.

The choice of Sinnoh, or rather Hisui, for this temporal rewind was an inspired one. Taking inspiration from Japan’s northern prefecture of Hokkaido, as well as the indiginous Ainu people, gives the game the chance to develop a very different setting and identity from past Pokemon games. There’s also fun in the fact that many characters are ancestors of past characters from across the series. There’re also some instances where this plays with expectations – Arezu, who looks suspiciously similar to a few villainous characters, is only ever friendly to your hero.

Speaking of, the Galaxy Expedition Team paves the way much of the game’s differences to the past (or rather, its future). Their focus on Pokémon observation and research is something the games always told rather than showed. Yes, we’d be filling out the Pokédex and every creature in it had a little description, but now we’re literally profiling them as they’re discovered. 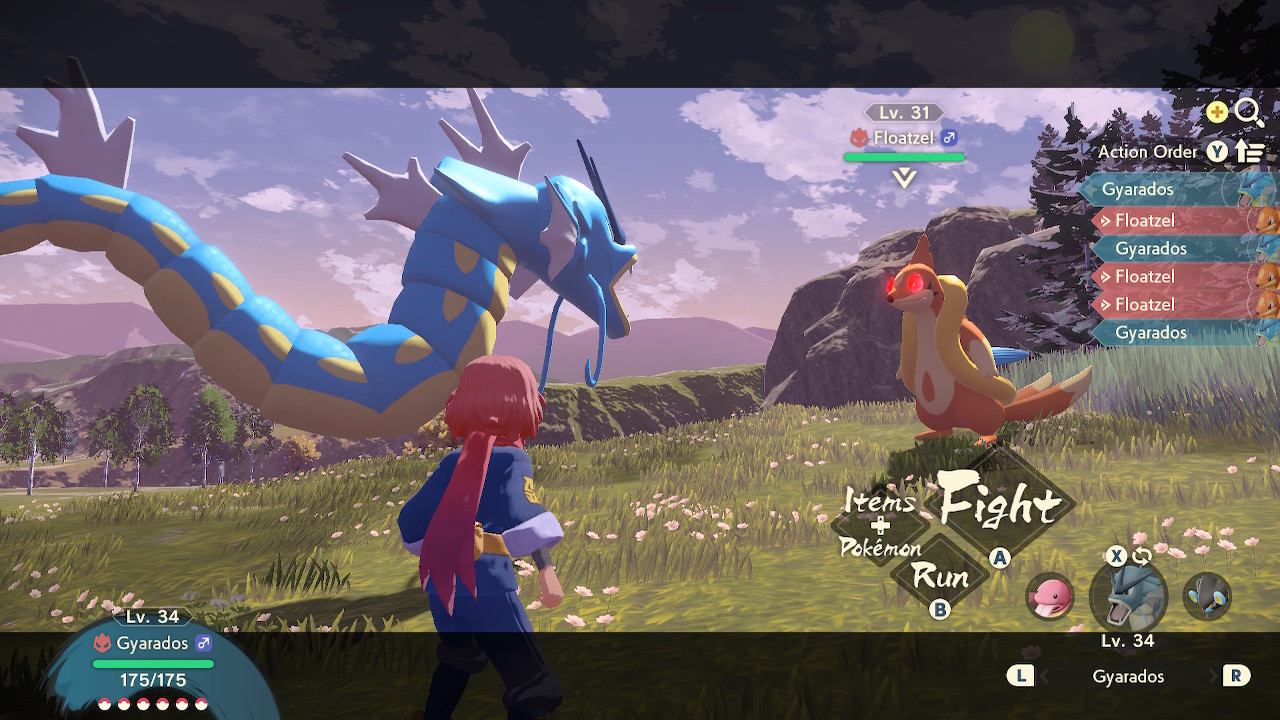 You can catch and forget if you like, but it’s much more rewarding (literally and personally) to work your way through their listed objectives. Those can include catching a certain number, feeding them their favorite foods, or witnessing a specific attack get used repeatedly; among others. While it’s not the height of ecological examination, it’s still a more fleshed out approach to something that’s been so core to the franchise since the beginning.

All of this takes place across a handful of wide open wildernesses that give the Wild Area a run for its money. That scale comes with some drawbacks, namely in that they can feel empty and without much to actually explore outside of whatever Pokemon live there, but not once did I miss routes or caves. This isn’t the first time a Pokemon game has had all its encounters visible on the map, but the approach here paired with the new catching mechanic blows what predecessors had out of the water.

Being able to just aim a Poke Ball, toss it, and potentially catch without a menu is the kind of paradigm shift Pokemon has needed for years. It’s the kind of thing that needs to stick around, be it via adoption to titles moving forward or spawning a whole Legends sub-series. Streamlining this process and removing battling (read, grinding) from the experience is something I never even considered and I found myself avoiding faceoffs as much as possible. 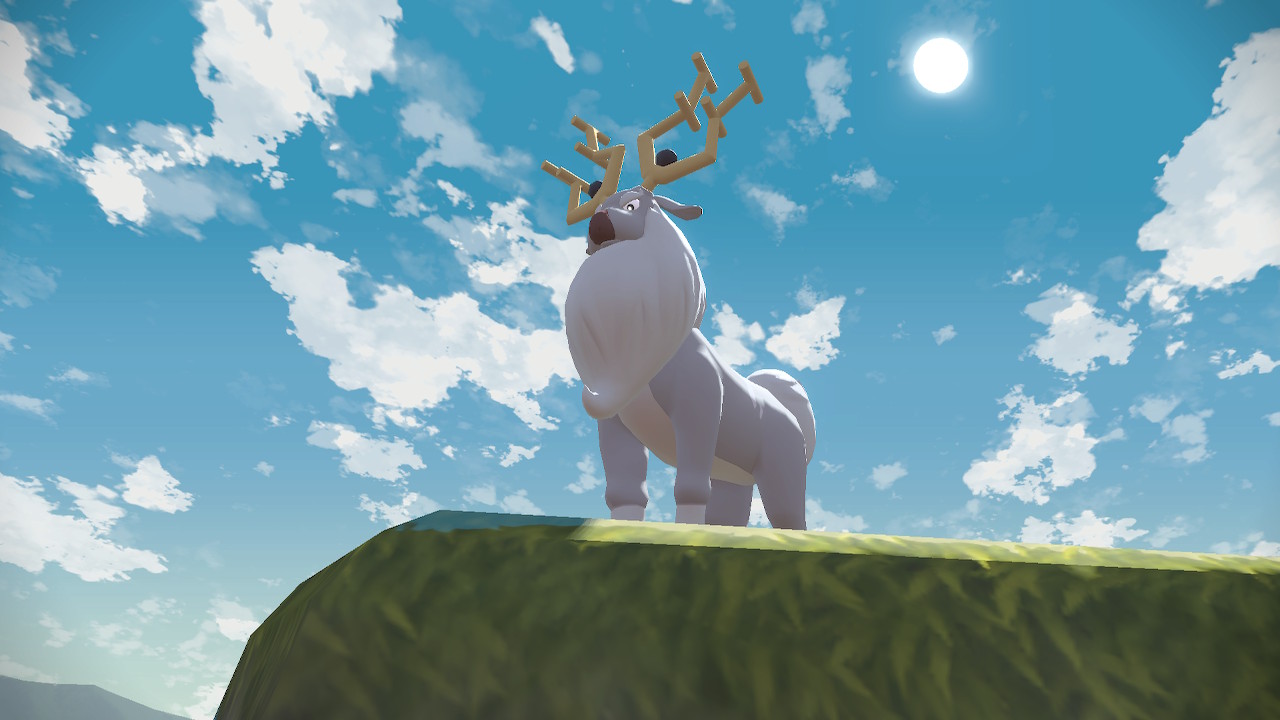 That’s not exactly optimal, nor possible, but that the game let me come in with that as a preference and stick to it by and large was appreciated. Experience is yet again delivered to your whole party, but it’s also gained from actions beyond battling and catching. Candies that bestow EXP are back at it again, but you can also build up those gains by having your Pokemon interact with the environment in pursuit of crafting materials. Who knew headbutting a tree was the key to personal growth, but it might be my Typhlosion’s most recurring action.

Another smart move (and if it isn’t clear, Arceus has plenty up its spatiotemporal sleeve) are changes to aspects of training and developing your Pokemon. Evolution isn’t automatically triggered and then potentially stopped – you’re able to decide when the process happens no matter what method triggers the metamorphosis. Having briefly been addicted to completing research tasks, this is an option I appreciated and can actually see making its way back to the core formula. 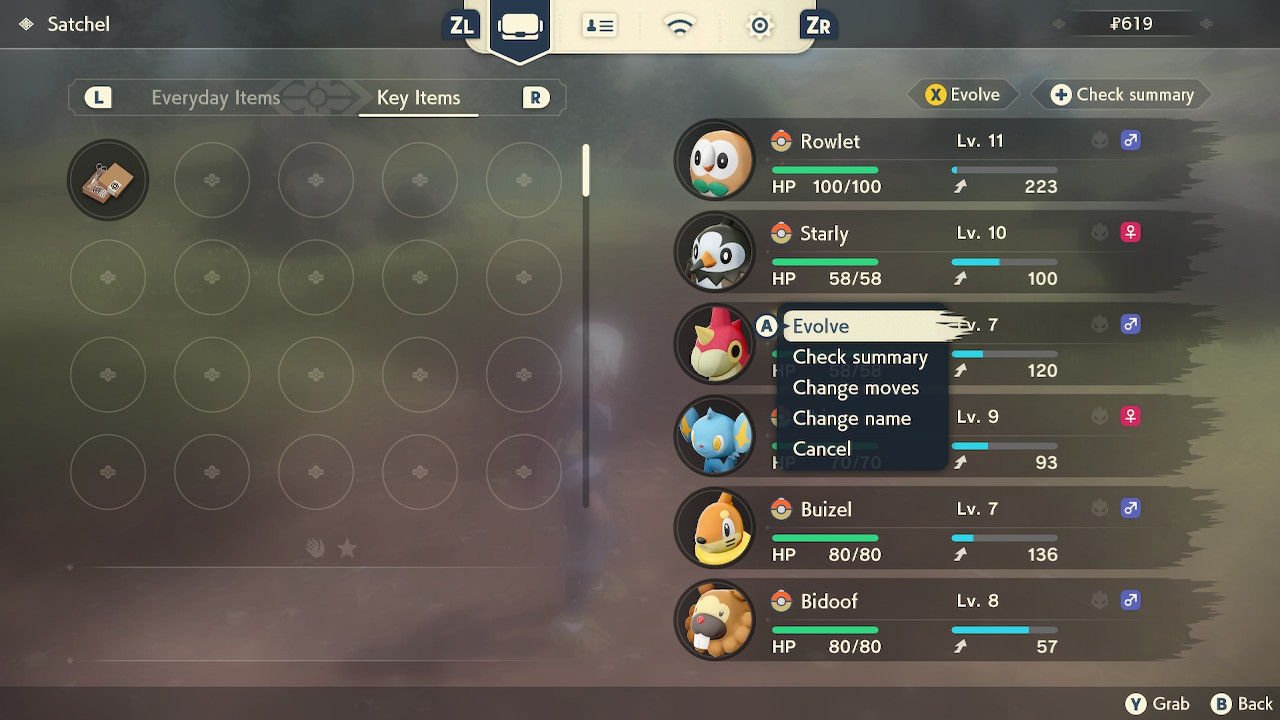 Effort Levels also stand out as an interesting experiment. IVs and EVs have been either done away with or diminished to the point of irrelevance. Any specimen of a Pokemon species can bring its stats to further heights by instead raising that stat’s Effort Level using a progression of items. In Legends it somehow makes perfect sense (and those out to min/max or hunt down the optimal still have Natures and other factors in the mix) but I don’t see this one sticking around outside of that.

Moves themselves have been overhauled, and this is where I’m a bit torn. Having your Pokemon always have access to the moves they’re learned (but still only able to “equip” four) is genius. Doing away with TMs but having moves buyable from a Move Tutor also works. What felt a little unfortunate is how shallow the game’s move list is in comparison to other entries. It does do away with potential redundancies, and not everything would fit within Arceus’ battle system, but if something like Stealth Rock can get fundamentally reworked then there was a better option than just axing the lot.

On the subject of battles, the system in Legends was another aspect to see big changes, though they’re ones I don’t feel like I’m completely on board with. Again, that I tended to avoid them might say a lot on its own, but when I gave them a go or the game forced them on me is when I felt things were at their least enjoyable.

I will give credit where due, battle animations feel more thought out than the bulk of them from Sword and Shield. This is more an extension of the game’s design as a whole, as behaviors and personalities also come out in the overworld when you’re trying to observe and catch. The new mechanics also allow for a greater degree of strategy during the battle itself rather than all of it falling to move choice.

With Agile and Strong Styles, you’re able to determine if you’d be better off hitting quicker but weaker or later and more powerfully. Fundamentally I understand it, but in practice things didn’t always seem to click. Some encounters had me hit four times in a row by the same Pokemon before I could act again, and while it was a speedier species and likely more a consequence of timing than anything it still felt a bad experience.

That’s not even getting into situations where you’re gained up on by multiple Pokemon, plus having to “unlearn” more than two decades of battle strategies and understanding. All the credit in the world is still due for reinventing (or maybe just respoking) the wheel in this department. Beyond making the world feel more alive and interesting to explore, this is where the Legends formula has the most to gain on a fundamental level. 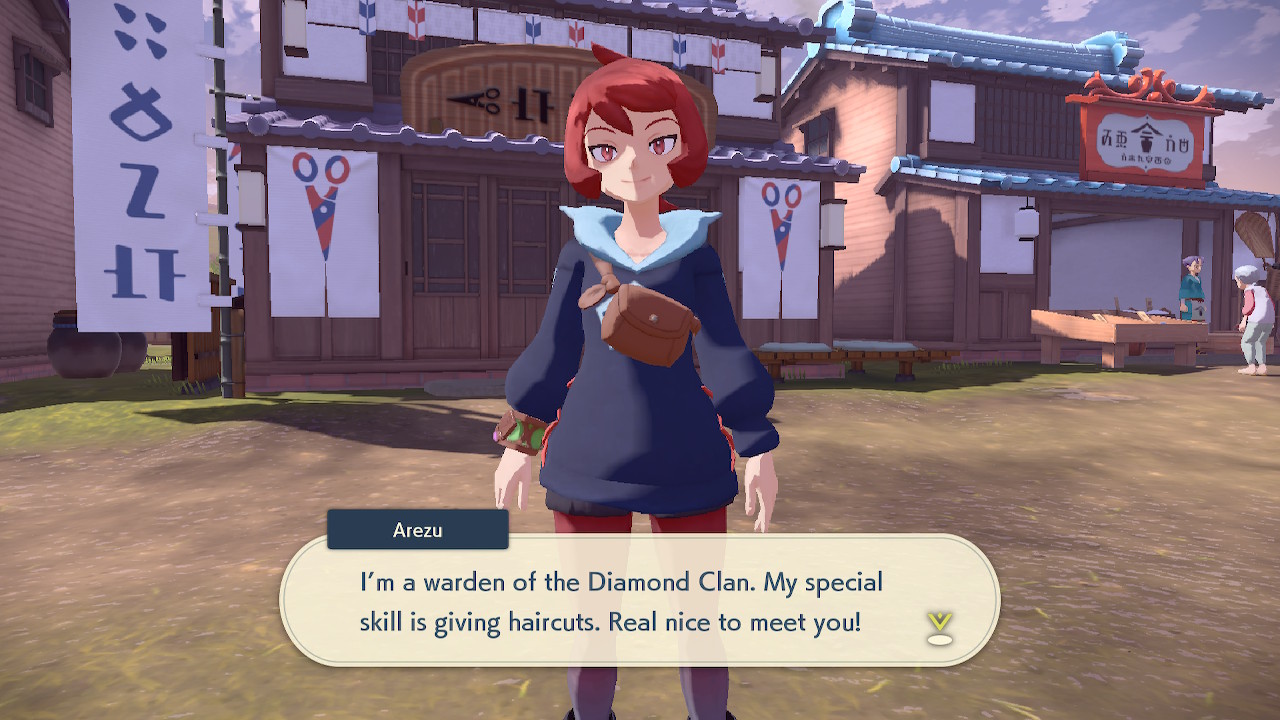 When it comes to story and characters, I like to keep my expectations fairly low. That’s what TPCI gets for setting that bar fairly low, and leads to pleasant surprises when they drop something like Black/White and Sun/Moon. Legends: Arceus, in this department, doesn’t really improve or adapt the way its gameplay has. Thankfully it feels more integrated to the overall experience. Slipping through time and into past-Sinnoh works, as does the core of being integrated into the Galaxy Team. What feels less thought out is the conflict between the Diamond and Pearl Clans. Irida and Adaman are both likable additions to Pokémon lore, though, and there’s enough going on (and even a few surprises) that it manages to be serviceable, and at some points even entertaining.

That all said, through personal experience it seems many don’t come to these games for stories. World building though, that can be interesting, and Arceus does well there. A lot of that comes with fleshing out the past of this series, but it also comes up in the new Pokémon forms and species. A handful of regional variants have been introduced, including the final evolutions of the three starters. I loved my haunted wolverine friend, but Hisuian Typhlosion isn’t the only standout.

Hisuian Zorua and Zoroark take a look at ideas like migration and failing to adapt to a harsher climate, for example, while others play up the mineral-rich soil of the region. We even get to enjoy interacting with Pokémon out in the world, and see them in pastures (this game’s Boxes) when in Jubilife Village. The process of giving Pokémon that never really got much love more attention has always been an interesting approach – Stantler and Basculin must have fans out there but now they (or rather their evolutions) get to be your means of transportation and firmly in the spotlight.

Getting around with them is well and good, though I do still wish there was more to do in Hisui’s various explorable areas. There are two larger scale search quests via Unown and Spiritomb, tasking you with either deciphering clues or just hunting high and low, but they’re no Korok Seeds. Requests are also an interesting approach, giving players dozens of sidequests to work through. I applaud the task based nature of them, which often go hand in hand with research tasks, for getting me to do more in the world. A little more variety here and maybe a means to complete quests from your Arc Phone would’ve been nice, but I still found myself completing these regularly. 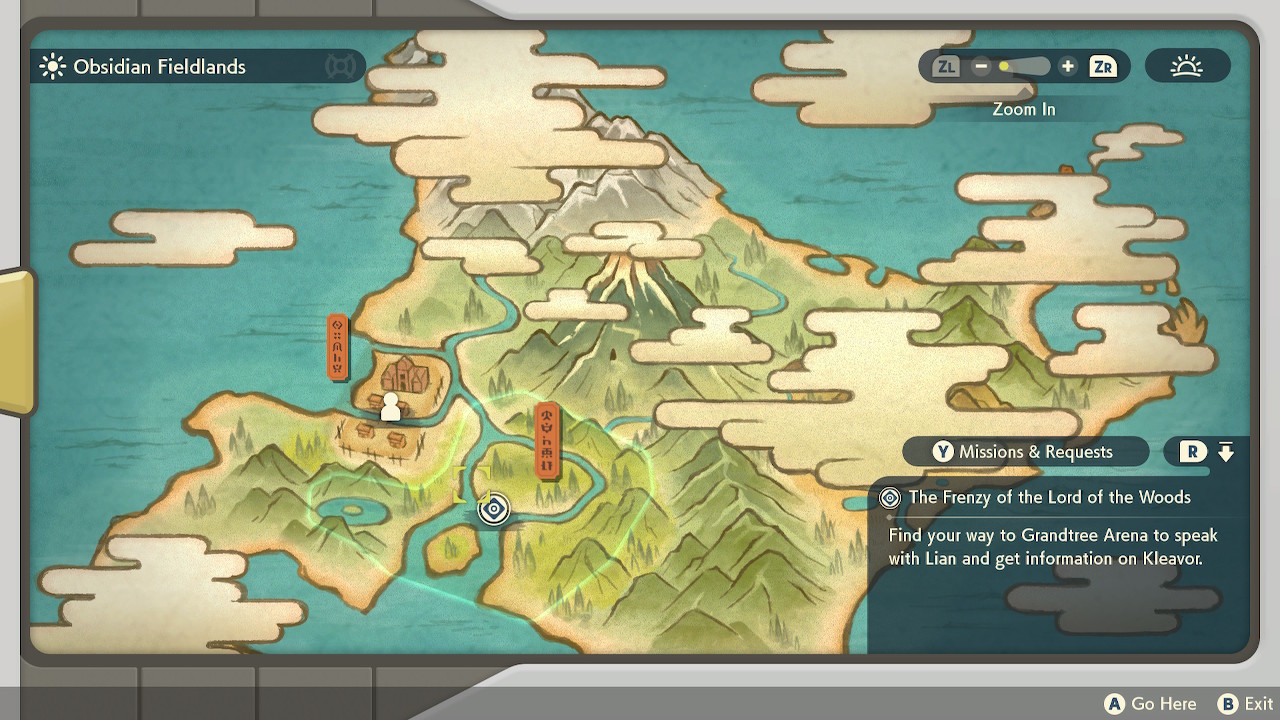 It must be emphasized that, regardless of whether it’s “good” or not, Pokémon Legends: Arceus deserves a whole lot of credit just for trying something new. This is a series that has remained fairly consistent since its inception, with growth being iterative rather than sweeping. In casting aside many established norms, Arceus gets to be more than just the latest Pokémon game – it gets to be a new kind of Pokémon game.

With this, remakes like Brilliant Diamond and Shining Pearl, gateways ala the Let’s Go! titles, and the core experience of Sword and Shield; the Switch has become the finest home Pokemon ever had. And dare I say, Legends is the new crown jewel of that collective. It has room to grow and doesn’t always impress in terms of performance, but in tightening the focus on research and catching Pokemon rather than battle after battle it’s honed in on the appeal spirit that Professor Oak taught us two and a half decades ago.