The cries of millions of fans have finally been heard by Atlus, and Persona 5 Royal is finally making its way to the Nintendo Switch, allowing fans to steal hearts on the go. As the definitive edition of 2016/2017’s Persona 5, Persona 5 Royal has been heavily updated with quality of life features and plenty of new content. New characters are seamlessly inserted into the story, and other story and gameplay elements have been tweaked to make the entire experience even smoother. I’ve spent the better part of the last two weeks playing through this extremely expansive title on my Switch, and I’m happy to report that the entire experience has been a positive one. 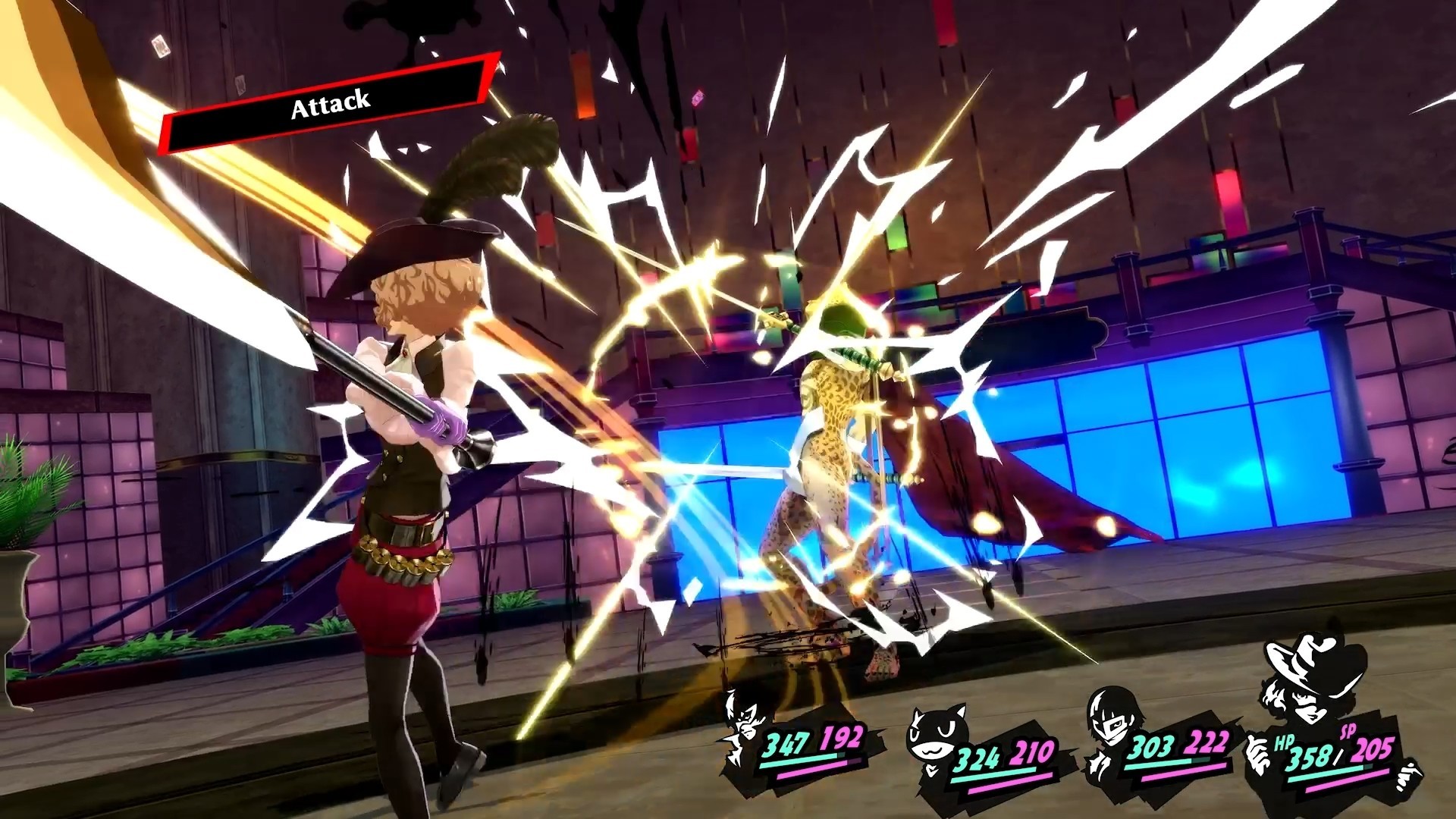 You’ll play through Persona 5 Royal as a teenager falsely accused and convicted of assaulting a man he was trying to stop from sexually assaulting a woman. This conviction leads to your expulsion from your school, and you’re sent to live with Sojiro Sakura, a café owner in Tokyo, where you’ll attend Shujin Academy. On your way to your first day at Shujin, however, a mysterious app on your phone sends you to an alternate dimension formed from the cognitive desires of the general public, the Metaverse, which is where the majority of the game’s adventuring and combat will take place. Over the course of the story you’ll meet other teenagers who have been unfairly maligned by the adults in their life, some of whom will join you in the Metaverse as The Phantom Thieves of Hearts, working to change the hearts of those whose selfish desires are negatively affecting the people and world around them. As you venture through both Tokyo and the Metaverse, a larger narrative of injustice and corruption will slowly unfold, and it’s up to The Phantom Thieves to stop it.

Persona 5 Royal adds a third semester of content to the already huge amount of story present in the original game, featuring more to do and an additional Palace and final boss to conquer, and for the most part it flows pretty seamlessly into what was already there, though this new semester is pretty separate from the rest of the story as a whole. There are two brand new characters in Royal, Kasumi Yoshizawa and Takuto Maruki, and while Maruki blends into the story far more unobtrusively than Kasumi, both are fantastic additions that feel right at home in the story. The rest of the cast of characters in Persona 5 have had my heart since the original US release in 2017, and these new characters in Royal are no different. The voice acting is top-notch across the board, and while the game isn’t 100% voice-acted, a huge portion of it is, and each performance really brings these characters to life. 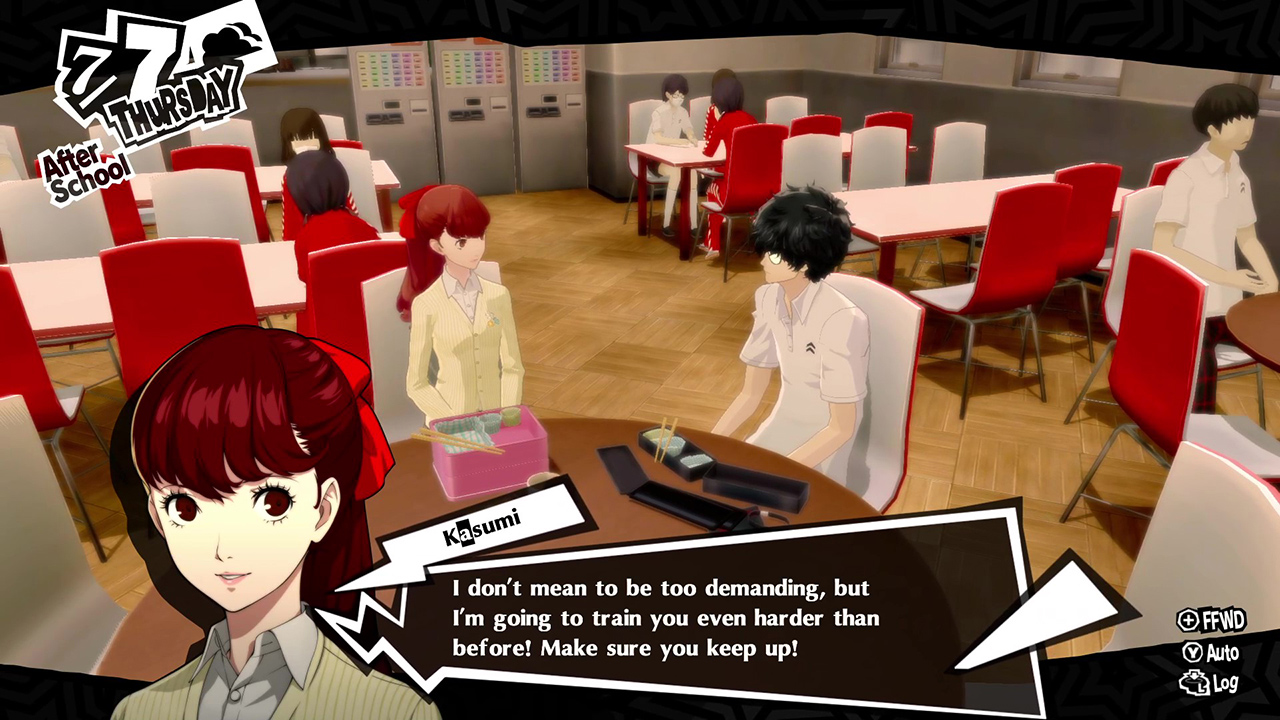 The story, while not being incredibly complex in and of itself, does explore plenty of complex themes. Themes like abuse, abandonment, ambition, rebellion, and more are explored, while also asking bigger questions like how does your own perception of reality affect how you react to the world and people around you, and how can that perception be used for good or evil? These are complex themes and questions on the surface, and Person 5 Royal does handle most of them well, without bogging the player down with how deep they can really go, and this is to the game’s benefit, I think. You aren’t asked to think too much if you don’t want to, but these themes are present for you to contemplate if you so choose. Alongside the deeper thematic elements present, the story is also full of plenty of good old-fashioned twists, turns, and reveals, that are always a blast to follow along with, especially with such an endearing cast of characters.

The gameplay of Persona 5 Royal really comes in two parts: one part being a life-sim in the real world in which you’ll go to school, work part-time jobs, hang out with your friends, and more, and the other part being a more traditional JRPG taking place in the Metaverse, with dungeon exploration and turn-based battles against strange and fantastical creatures. The two elements of the gameplay blend incredibly well in Persona 5 Royal, with plenty of chances for you to affect each of the worlds with what you do in the other, sometimes in a big way, other times in a small way. Each major character you meet in the real world forms a bond with the main character as a “Confidant” and corresponds to a specific Arcana, like in a deck of tarot cards. As you spend time with these Confidants, they will teach you new skills or systems that can change or improve how you interact with the Metaverse, while in turn, situations will arise in which you can affect the lives of your Confidants by taking certain actions in the Metaverse.

All of the game’s combat and action will take place in the Metaverse, where you’ll either be exploring a Palace, a construct of one individual’s extremely distorted desires, or Mementos, a vast, randomized dungeon formed from the desires of the public at large. Palaces act as the main dungeons of the game, with puzzles, mini-bosses, and a boss at the end, while Mementos is something of a dungeon all on its own, where plenty of sidequests and exploration will take place. Both are equally important to the story, though Palaces are where most of the story-related combat and exploration will take place. Each palace is themed around the desires of the one whose heart the Phantom Thieves are trying to change, and range from pretty standard fantasy fare, like a castle, to larger scale and strange themes altogether, like a giant floating bank or a factory in outer space.

Exploration in both Palaces and Mementos were updated in Persona 5 Royal, though Mementos is perhaps the bigger beneficiary of quality of life improvements. In Persona 5, Mementos felt like a sprawling slog, and I somewhat lamented exploring it, thanks in part to little reward for doing so, and the repetitive music. In Royal, however, there are more plentiful rewards for exploring, and the music changes the deeper you go, and it just feels like an overall more enjoyable experience. The majority of the Palaces were also reworked with a new grappling hook mechanic in mind, though not to a large degree, and in most cases it just felt like a rework for the sake of a rework. These reworks do add three new collectibles in each palace, called Will Seeds, that can be reached with the grappling hook, and grabbing each Will Seed from a Palace rewards you with an item that will enhance different stats when equipped to the main character or a party member.

Combat is also improved in Persona 5 Royal, with little improvements like each party member having Baton Pass unlocked from the outset and guns being reloaded at the beginning of each battle rather than at the beginning of each Palace infiltration, and these changes make it far easier to take on enemies as you get further into a Palace infiltration or Mementos exploration, and really just make for a smoother combat experience overall. Also new in Royal are Showtime Attacks, where two party members will unleash a special move with an accompanying, often outlandish, cinematic. These Showtime Attacks are unlocked progressively as you get further into the game’s story.

The Showtime Attacks are a small part of something that I greatly appreciated in Persona 5 Royal, which is getting to experience the Phantom Thieves being an actual group of friends with relationships to one another outside of just being The Phantom Thieves. In addition to the Showtime Attacks, Royal expanded the ways that you can hang out with your friends as a group, allowing you to get together to play darts or billiards together, which also upgrade battle mechanics like Baton Passes or Technical attacks. All of these changes are a pretty big breath of fresh air compared to the original game, where we only really saw The Phantom Thieves interact within the context of the story, which made it feel like they really only had their friendships with the main character in common, rather than friendship with each other. 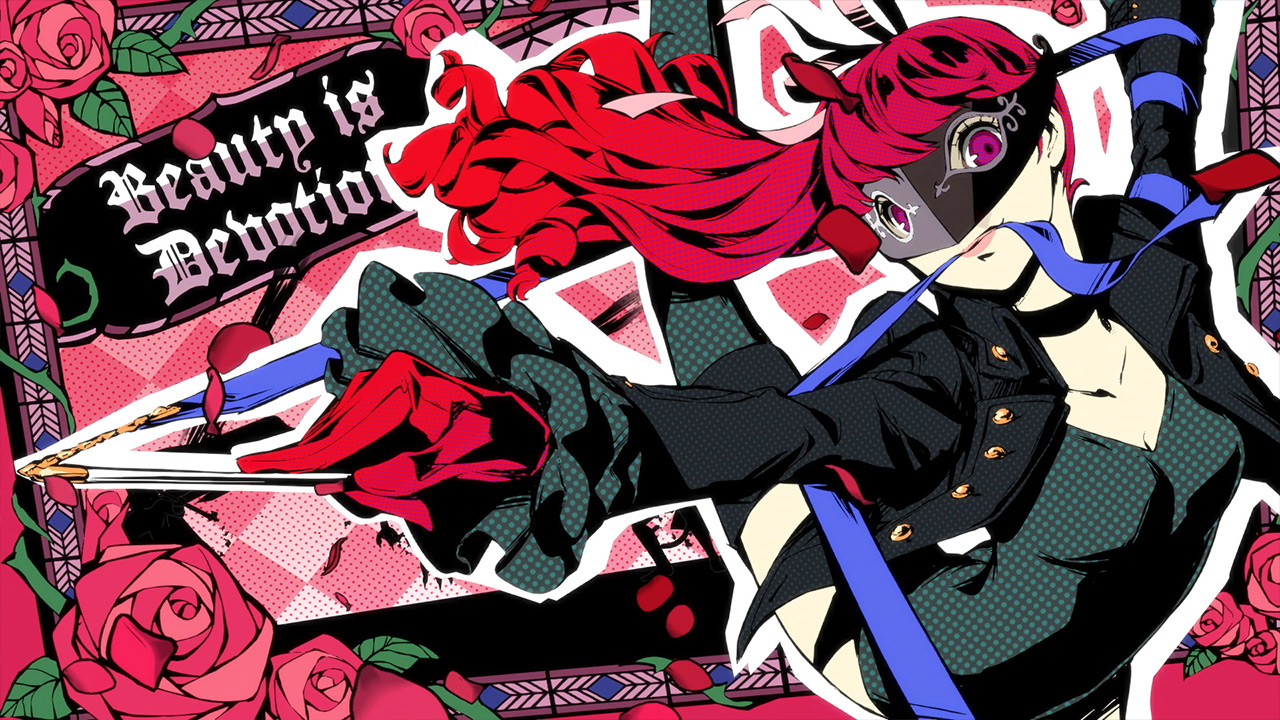 Seeing Persona 5 Royal on the Switch is a dream come true for me, as it is for many others. Despite playing both the original Persona 5 and Persona 5 Royal on PS4, a JRPG is almost always more enjoyable to me when I can play it on the go, so I was happy to do it all over again on the Switch. The Switch has always felt like a perfect fit for Persona, and now that it’s here I’m extremely pleased with the result. The game runs smoothly at 30fps in all situations, without a frame drop in sight, though early on in a few of the Palaces I noticed that some textures or effects that were supposed to be shimmering in appearance were very choppy, almost as if they were cycling through a few frames of their animation rather that playing it fully, though when I looked for this issue in the later palaces I noticed that it wasn’t happening any more, even on the very same objects. All of this to say that this is a very small detail in the grand scheme of things, given I only ever noticed it on two types of decor, and it went away after a time.

In handheld mode the resolution isn’t perfect, but it’s definitely playable. The visuals are a little blurry, which is to be expected for a Switch port, though the UI and the text are all perfectly crisp. It was thanks to this that I didn’t find the blur to be distracting in the slightest, after all, slightly blurry character models are fine to look at, but blurry text and UI elements would have been a pain to try and read. When docked, however, the game looks great enough that I never really thought twice about any of the visuals, and still ran great to boot. The bottom line is that if I hadn’t had to think about the visuals for the sake of this review, nothing I mentioned here would have affected my enjoyment of the game. 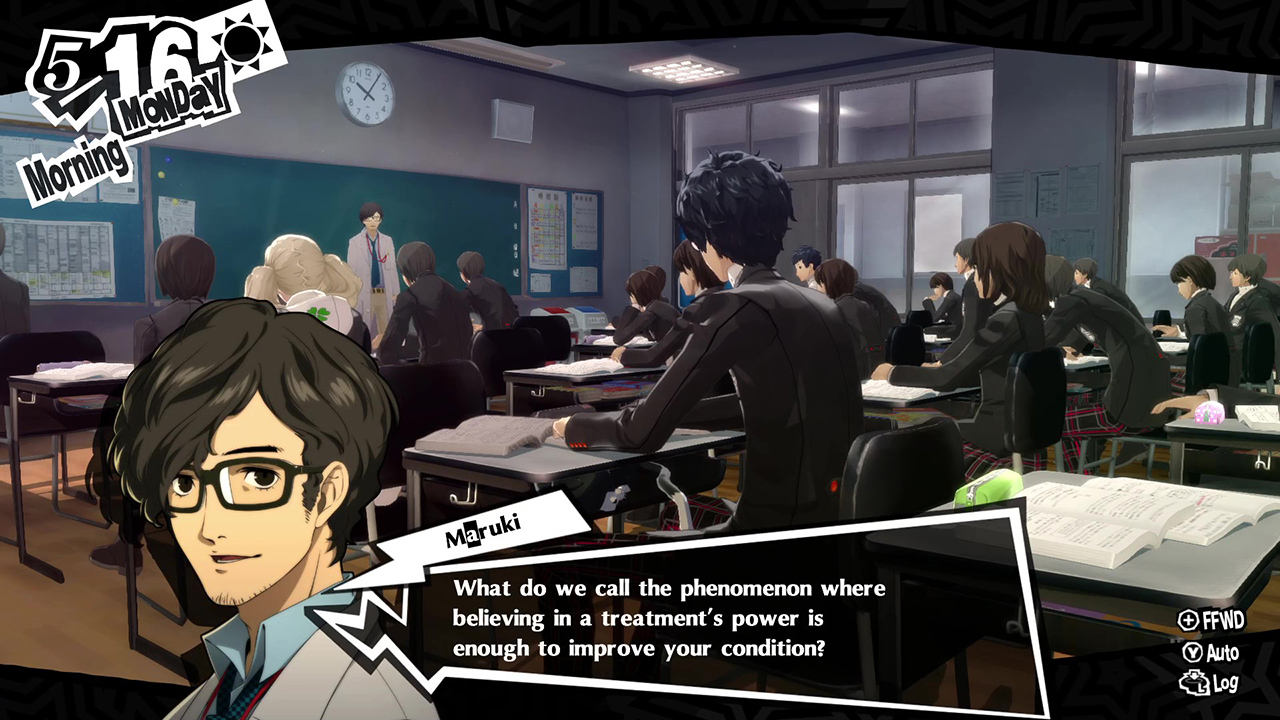 Persona 5 Royal is a stellar game that may go down as one of my favorite games of all time, certainly one of my favorite games of the last decade, and it feels right at home on the Switch. It’s packed to the brim with stuff to do, and you’ll be playing it for hours on end, which, for a game so enjoyable, is a real treat. I love these characters and I had a blast revisiting them on the Switch, even more so since I could play just about anywhere I wanted. If you’re a JRPG fan and the Switch is the only place you can get your hands on this game, then picking it up is a no-brainer. Even if you do have other platforms available to you, the Switch might still win out as the obvious choice given how well portability lends itself to JRPGs. 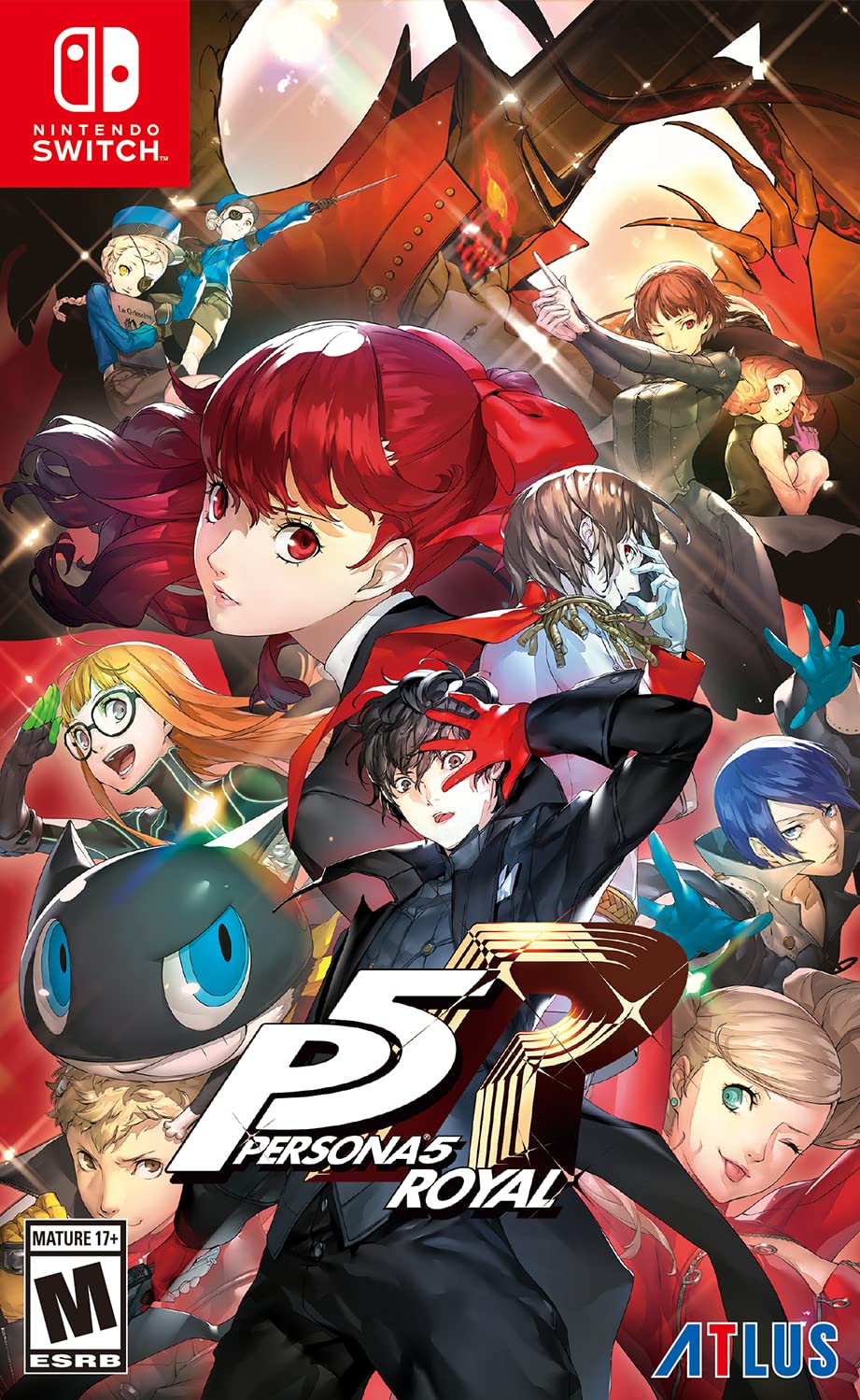