HAL Laboratory has been delighting Nintendo fans for decades, most famously with all things Kirby. Now, though, they’re sending another round, floating friend out into the world to make a living via the gig economy.

Part Time UFO is a Switch port of HAL’s first mobile title, titled Hataraku UFO in Japan. It maintains all the charm and simple, addictive premise of that release while adding in new ways to play. Just like BoxBoy! made its mark as an eShop must have on 3DS, Part Time UFO represents one of the best Nintendo published digital offerings you can find on Switch.

The Right Stuff for Every Job

You play as Jobski, a flying saucer fell to Earth who sets out to make a living through some heavy lifting labor. Jobski may not have limbs, but he does have an extendable claw (think an arcade crane game) that he can use to carry and transport things. 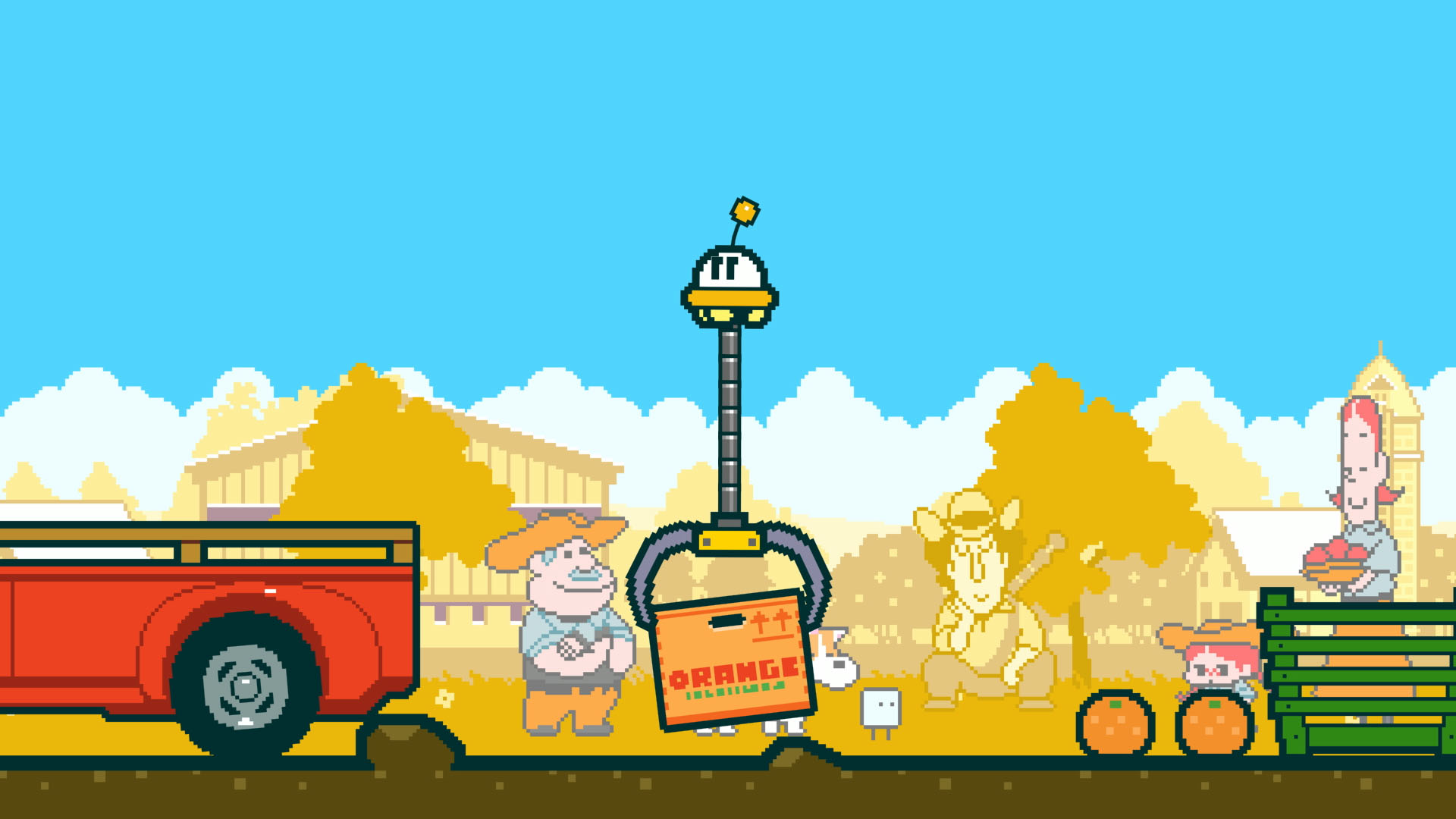 That part is usually easily – it’s stacking and placing them precisely that gives the game a sublime amount of challenge. Never overwhelmingly difficult, Part Time UFO manages to (appropriately) find a balance that makes it both enjoyable and replayable.

That repeatable nature comes from extra missions found in each stage. Completing these awards medals to Jobski, which unlock new stages and even harder versions of each job. On top of that there’s an in-game achievement system, a few other modes such as endless stacking and treasure hunting, as well as plenty of costumes to buy with your earnings. For a bite sized title, there was plenty to keep me invested. This is further complimented by how pick up and play it is, no doubt a holdover from its mobile origins.

As straightforward as the core concept is, Part Time UFO absolutely makes the most of it by filling its pixelated world with a bright, colorful aesthetic and fun character designs. It’s home menu sees Jobski spending down time in his modest apartment, looking through job listings for his next gig.

Those scenarios include helping a clumsy museum employee with putting an oddly shaped (read, hard to balance) sculpture back together, stacking sweets to make the ultimate parfait, and even arranging plush dolls of Kirby and friends in a wintery toy workshop. It takes a bit of getting used to to realize how things balance with each other, but once that clicks you’ll be manipulating the game’s momentum in satisfying and imaginative ways all to chase your next paycheck. 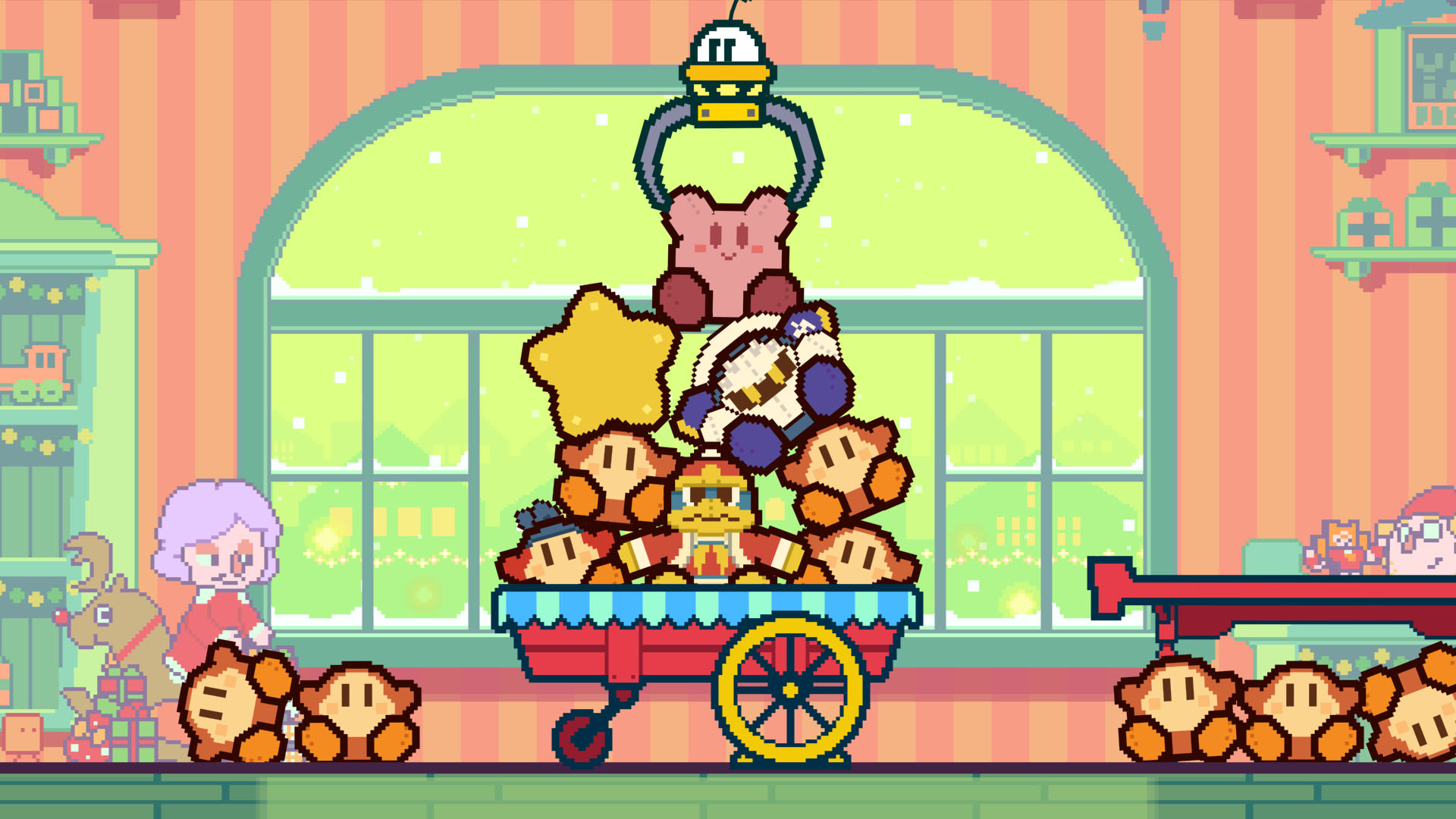 The only criticisms I have towards the game are that, even when background elements and objectives change, there are really only a handful of stages. You’ll see the same farm, circus, and more multiple times from start to finish which can err on the repetitive side. It does implement variety in other ways, but seeing more of this world would’ve been a real treat.

My other sticking point comes from the way it handles the trio of missions for each stage. Rather than state what needs to be done, little pictures are shown that indicate the task at hand. In the late game some of these weren’t as intuitive to figure, leading to repeat plays in order to try things out. As fun as the game can be, even its best levels can overstay their welcome if you’re trying them again and again.

Employee of the Month

Those are the most minimal of blemishes for Part Time UFO. I can’t overstate how much I’ve taken to the game. I love its theme song, with its many variations, and the way that each of the purchasable costumes give Jobski some variance in his abilities – and are too cute for their own good. This is how I like my physics based puzzle games, and once again it shows HAL’s talent for making the most of a (on the surface) minimal concept and presentation.

Part Time UFO can be played through in a weekend easily, but for its asking price that’s a perfect serving of what it has to offer. That’s not including multiplayer or the harder versions of its stages, but anyone who needs a stop-gap game between releases need look no further. I hope HAL sees fit to promote Jobski just as much as they have Qbby (who makes background cameos throughout the game) and we eventually see a sequel on Switch. 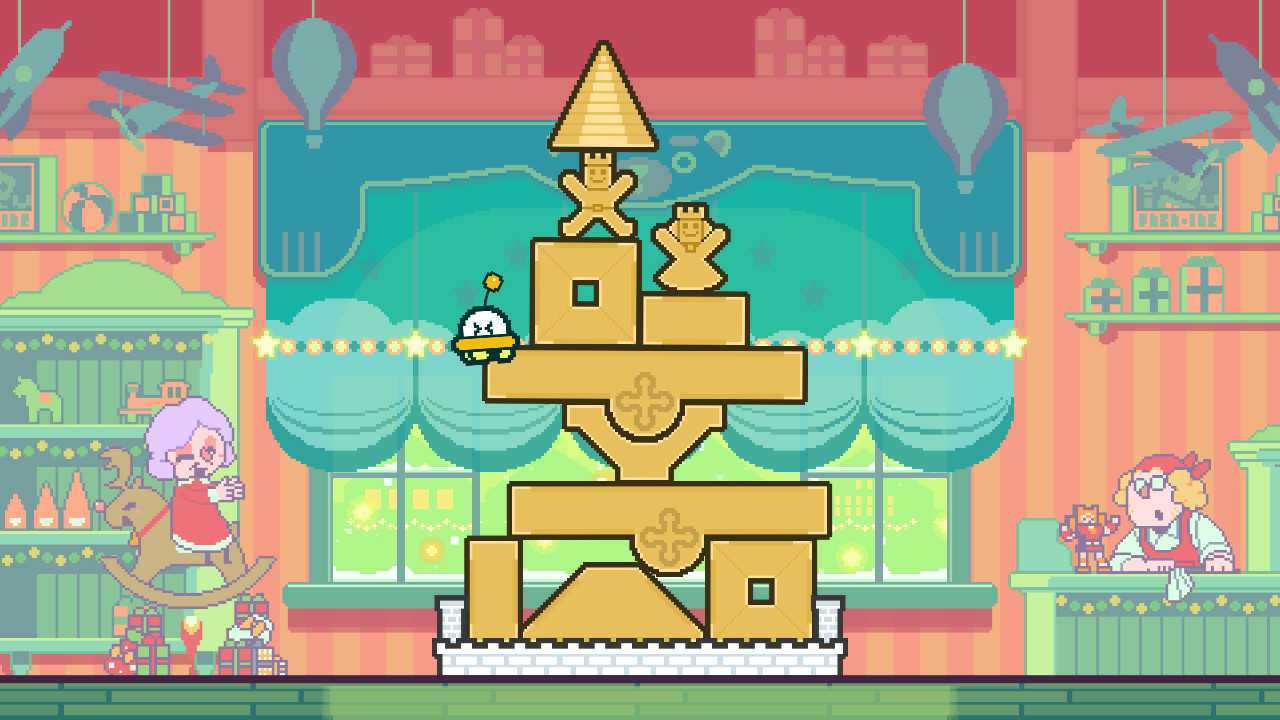 Though the game has been around for a few years on app stores, this expanded release has warmly welcomed Part Time UFO into the Nintendo fold. If you enjoyed the already mentioned BoxBoy! or titles like Pushmo and Harmoknight, this game is right there with them. So long as you appreciate it for what it is, Jobski more than earns his keep and our glowing recommendation. 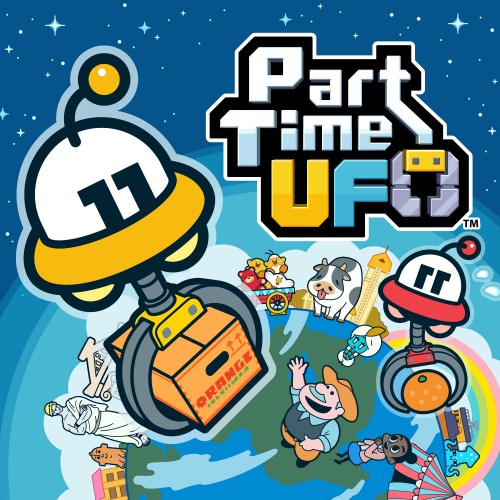