When I was growing up, one of the favorite games among my group of friends was Godzilla: Destroy All Monsters Melee on the GameCube. We loved the weighty, slow combat that came with playing as giant monsters, and the flashy, over-the-top moves. Flash forward a decade and the giant monster fighting genre has certainly been neglected. But where big names like Godzilla seem comfortable staying dormant in the realm of video games, many indie developers have taken the mantle. The newest entry in the Big Things Fighting genre is Override 2: Super Mech League. The title, from Brazilian developer Modus Studios Brazil, is a follow up to 2018’s Override: Mech City Brawl, and lets players take a massive roster of bots into a variety of game modes to duke it out. And while the camera, framerate, and gameplay variety may be an issue, there’s still lots to enjoy here, especially if you like big, beautiful bots.

Override 2 is a very simple arena fighting game. Matches range from one-on-one fights to four player free-for-alls and PvE horde battles. Each character has two arm attacks, two leg attacks, corresponding aerial attacks, and specials that are performed by pressing two buttons at the same time. It’s a small moveset, to be sure, but most of the characters have enough variety in the moves themselves to make each attack feel useful. Each character also has a super move that is performed after standing in a glowing spot in the arena for a time. 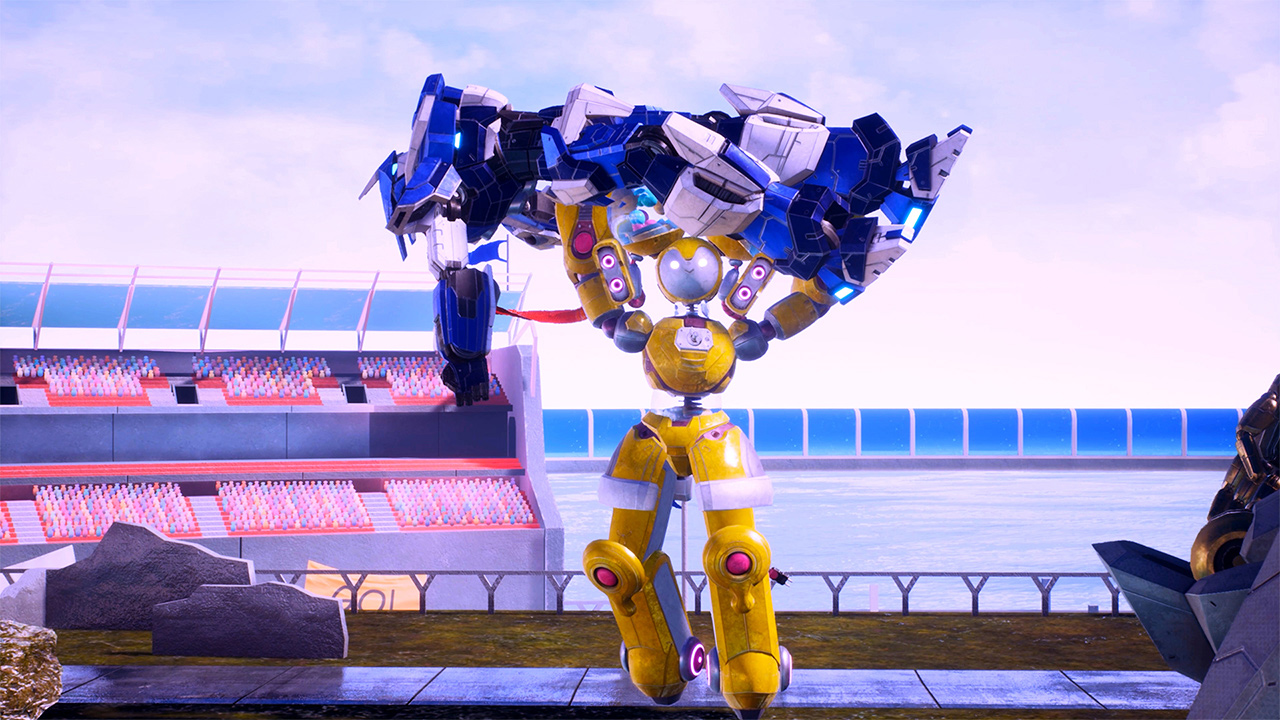 The roster is quite expansive, with over twenty characters overall, including DLC Ultraman characters, so you are bound to find some that fit your play style. That being said, some of the cast feel less memorable or more redundant than others. A few characters, like the fish-headed grappler Pescado, are much more memorable and unique, while others are just… robots, without much to stand out.

The game includes a suite of local and online modes. Locally, the Switch version unfortunately only supports two players, which is a shame, as the other console versions support four. As far as single player content goes, the main mode of the game is the new career mode. This combines the matches with tasks and goals given to you by sponsors through your very talkative agent. By taking part in a variety of matches, like King of the Hill, you can win money that can go towards new mechs and accessories to customize your robots. I do enjoy seeing the big robots with nice hats.

The actual fighting itself is quite fun. The small move set means you don’t get too lost in your game plan, though it is not the deepest fighter, to be sure. Many arenas have stage hazards, and items will spawn in, including swords, lasers, and my favorite, the frying pan. Your special moves have no cooldown, so if you want to use your last blast over and over, go for it. The four player modes can be hectic, but they’re still lots of fun, and the one-on-one games are a good challenge. The gameplay here is much faster than the first game, or in the GameCube Godzilla games. I personally loved the lumbering nature of those games as it really sold how big your kaiju is, but I also found the quick attacks and dodges of Override 2 to be a lot of fun as well. 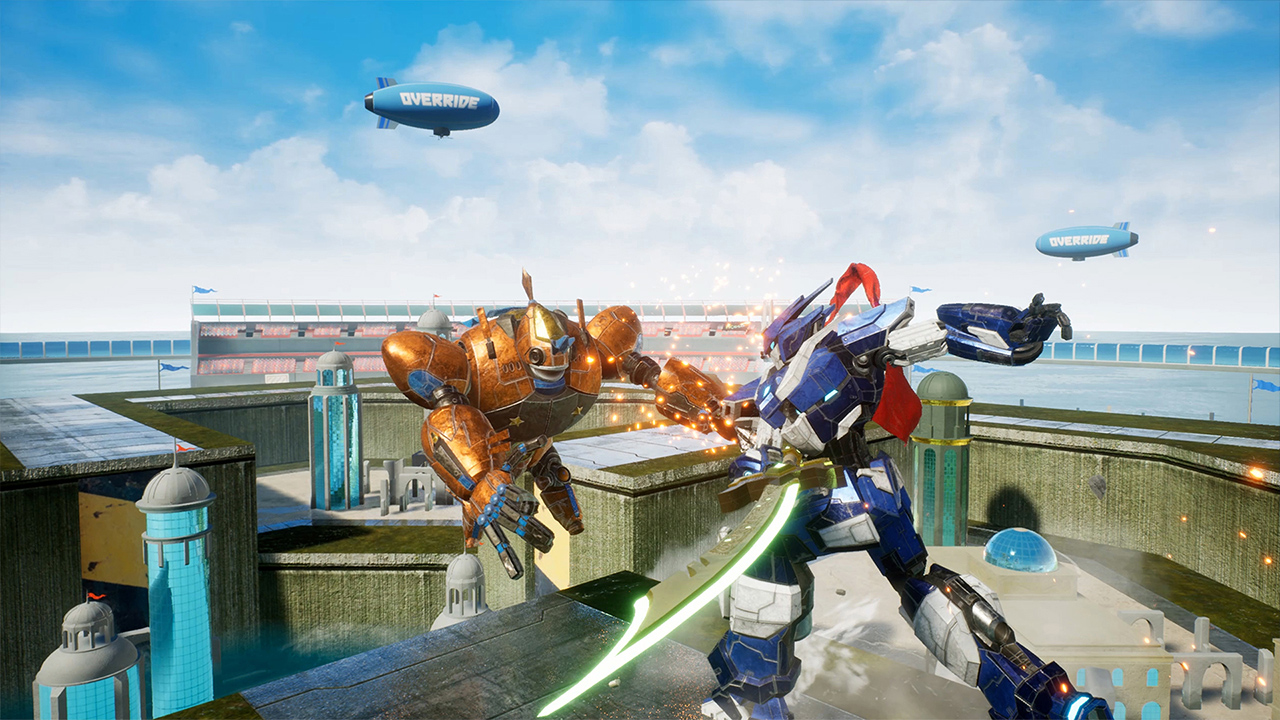 This career mode is a neat idea, but runs into some issues. First off, the online community on Switch is very small as of writing. I was able to play some League matches against human players, but most of them against computers, which isn’t as fun or challenging. This only exacerbates another problem: the sponsor tasks themselves. None of them are too hard, but they are so ridiculous that I ended up ignoring them. How about block one hundred times in an hour? Or do fifty throws in a half hour? These tasks are not fun. They are busy work, and become a real chore if you are actually trying to find human players, because you spend so much time waiting in a lobby. If it were something like throw fifteen times in twenty minutes, that would be both more realistic and more of a challenge. As it is now, however, these tasks that they make such a big deal about are not worth the effort.

Override 2 is a pretty nice looking game. The mechs all have solid animations and get damaged as the fight goes on. Some are more well designed than others, but they all fit the aesthetic. The main issue is with performance. The Switch version of the game is capped at 30fps, while the other versions are at 60fps. This mainly becomes an issue when combined with the camera problems.

The camera, which can be customized, locks onto enemies automatically by default. For the most part, the camera works fine if you have some distance between yourself and the enemy. However, once you come into melee range, things can get confusing. If you or your enemy dash around each other, or, even worse, jump over one another, the camera tracks the enemy with discombobulating speed. This would be less bothersome at 60fps, but in the Switch version, I find that the enemies doing any sort of movement near my character caused nauseating camera shifts and made me lose track of what my robot is doing. 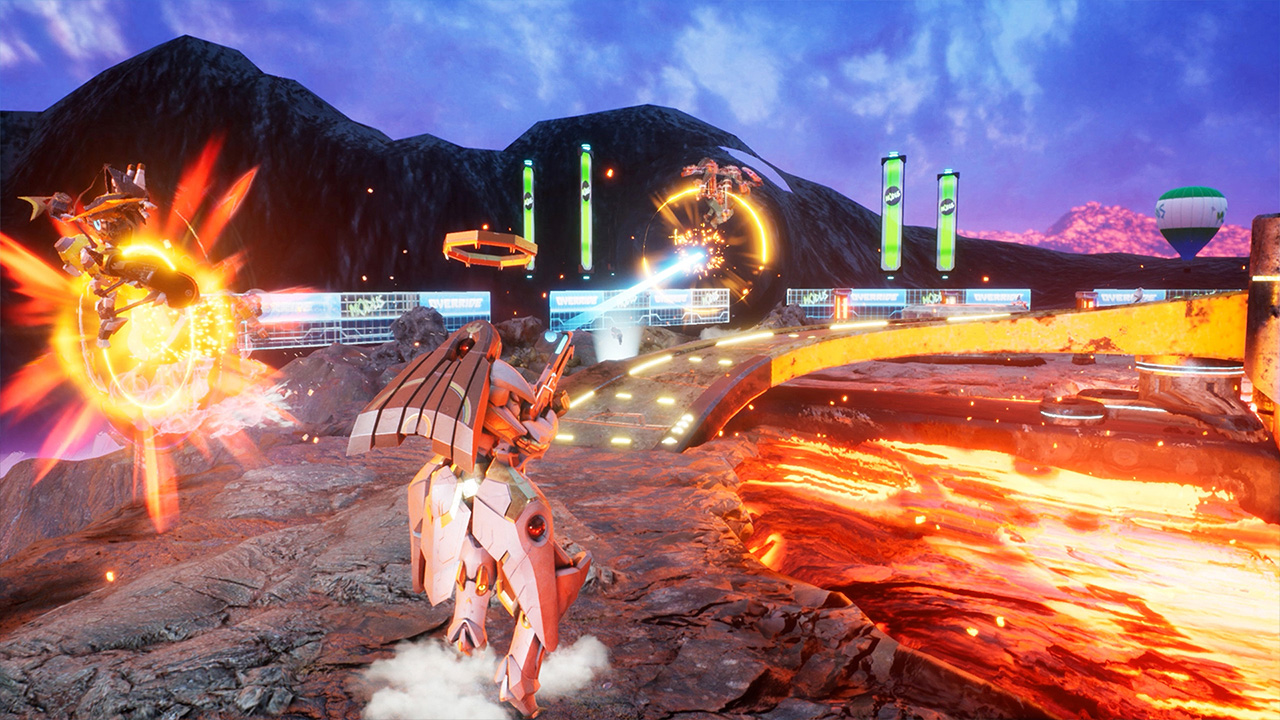 And that’s really the rub here: the Switch version, while cool to have on the go, is an inferior version. The lack of four player local play, the lower frame rate, the tiny online player base… it all adds up to a feeling that you are missing out on the true Override 2 experience. On top of this, the game itself has some areas that feel like corners were cut. The arenas have destructible environments, but rather than break apart dynamically, they just kind of explode, or turn into smaller pieces you can pick up. It really feels like it’s missing the destructive nature of giant robot fights, meaning that you kind of forget that they are even giants in the first place. There’s also a lack of personality given to the robots. They don’t even have a win screen, which could at least give us a little animation of the mech celebrating. Overall, it just feels like parts of the game were rushed, or certain things were cut, which is a real shame, because more destructive environments and more animations on the mechs would go a long way to giving the game more personality.

Override 2: Super Mech League is an ambitious game that successfully captures the fun of the giant monster games of yore, but stumbles and falls before it can cross the finish line. The laughably absurd tasks in the career mode are not worth your time, the lack of four player multiplayer on the most popular system for local play, and the low framerate means that the game falters where it shouldn’t. While I enjoy the actual gameplay, and it’s nice to have a more simplified arena fighter in this day and age, I would not recommend getting the Switch version. If you want to play it, you should get it on another console, or on the PC preferably. While the Switch version is still fun, you will burn out pretty quickly due to the lack of online players and the frustrating camera and framerate. 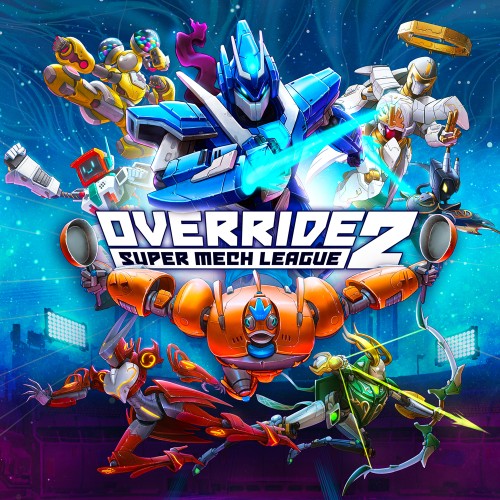