Editor’s note: The review below has been updated with the author’s full thoughts after playing through No More Heroes 3 after a Day One patch. If you read Ricky’s earlier version of his review-in-progress, I recommend diving in once again, as this full review offers a solid takeaway and thorough look at what you can expect from Suda51’s latest endeavor.

The idea that an experimental and often unwieldy actionized social commentary otaku fever dream would become a Nintendo staple is hard to believe, but here we are. Though Grasshopper Manufacture and Marvelous have since taken the series onto different platforms, both the first No More Heroes’ roots on the Wii and a regular presence in Nintendo Directs has solidified Travis Touchdown’s saga as one welcomely told in the company of Mario and Zelda — even if Suda still hasn’t finished Odyssey.

After years of anticipation, a few delays, and an interesting interquel, we’ve finally reached the supposed end of Travis’ story. While in many ways it works (and works quite well, particularly as an outlet for its auteur director), in others it can’t keep up the facade of cohesion and technical performance. Even with a post-launch patch, No More Heroes 3 is rough — bruised, but never staying down for the count. Make no mistake, you should definitely play this game. Just come in with the proper mindset and some patience and you’ll be repaid with 51 pounds of flesh. 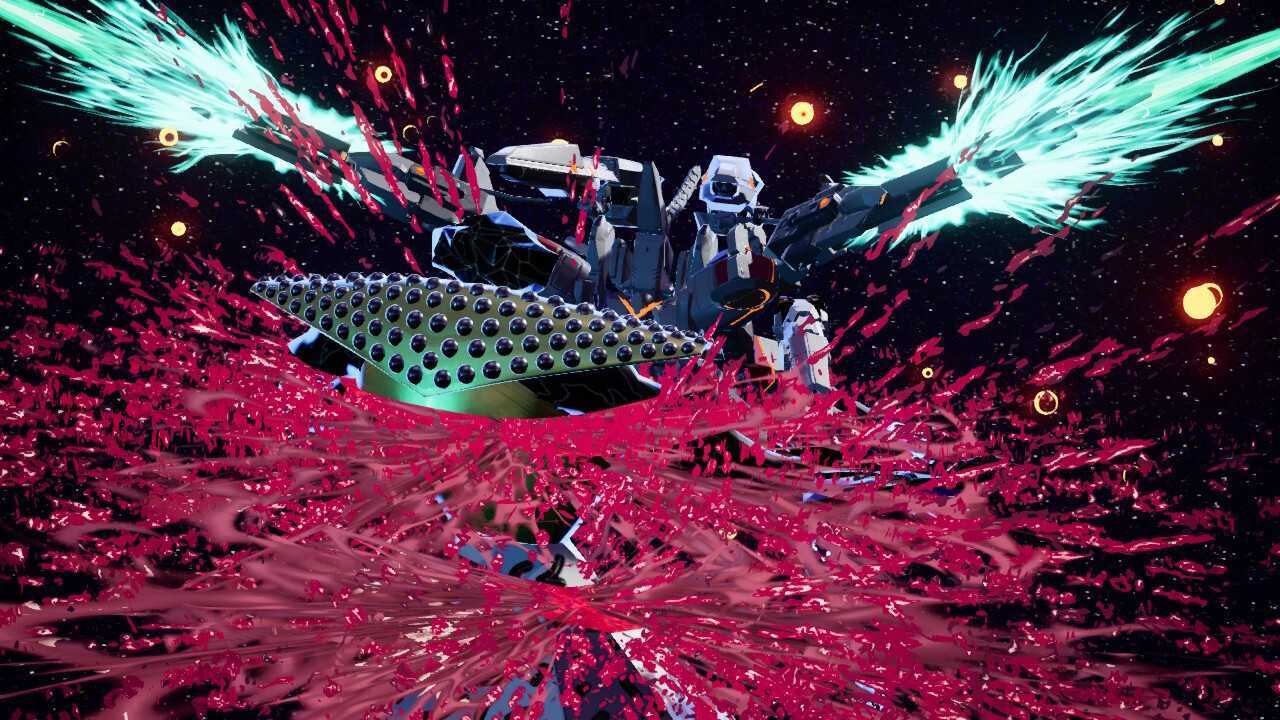 It’s clear even from its earliest moments that having Suda51 back as director for the full continuation of Travis Touchdown’s story is nearly a necessity to make this series work. Perhaps emboldened by the experimentation that came with Travis Strikes Again, No More Heroes 3 wastes no time drawing you back into its warped perception of reality. Mech suits, retro games, bright colors, and about four classic sci-fi references all show up in the game’s earliest moments; and it all blends together well. If the original NMH was Suda feeling comfortable in his own skin, 3 is a tapestry of tattoos and piercings that may seem disconnected until you look at the full, fleshy canvas.

Every “piece” of No More Heroes has returned. Travis is once again drawn into a killer-filled ranking list he needs to climb, this time against aliens with their own illusions of self-importance. These invaders, who call themselves “superheroes,” may reflect on the current state of pop culture, but ultimately it works within the game’s story. They (most specifically #1 threat FU) serve as a contrast to Travis’ own self-actualization as an assassin and “hero” in his own way, something that’s developed across the series. He’s come a long way, but still binges anime and chats with his buddy about Takashi Miike with the kind of all-encompassing, yet highly specific knowledge that’ll lead to one of them caving and buying a podcast mic eventually. 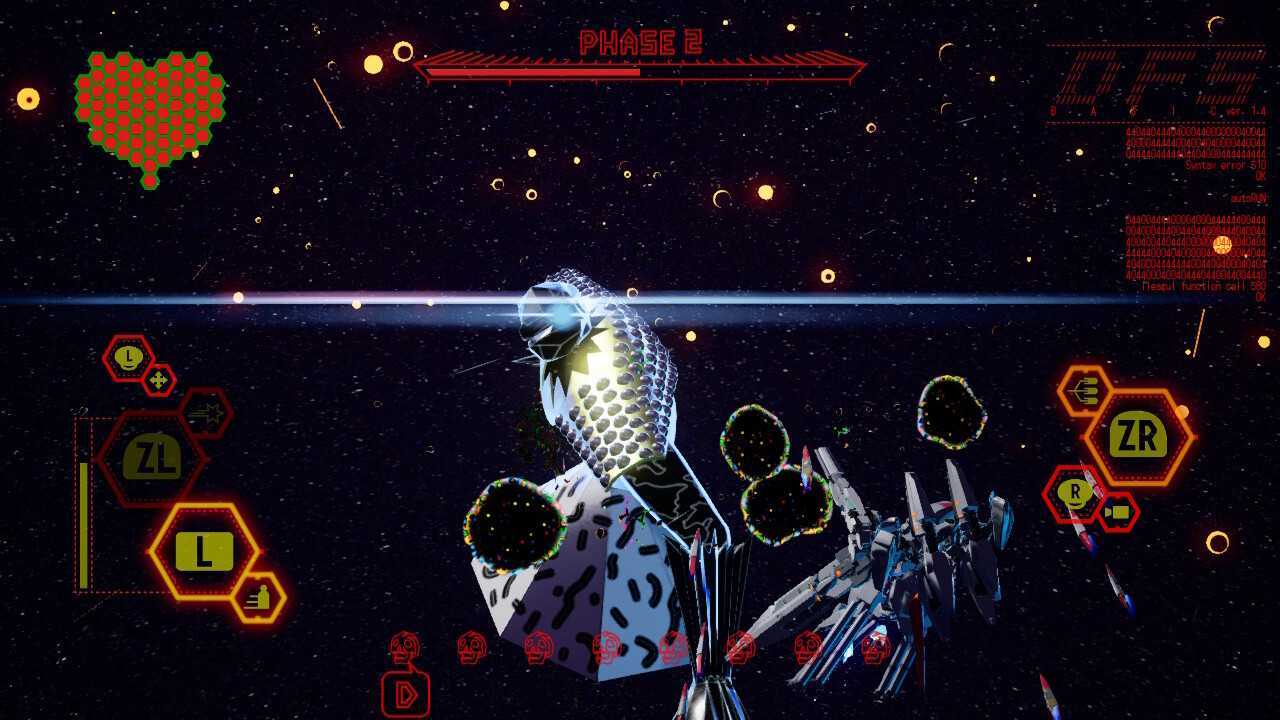 As the game progresses through its story, there’s a definite sense of style over substance. These games always had their own narrative consistency and tone, and No More Heroes 3 builds upward in that regard. The issue there is that when you grow upward from a low point it takes more effort to match the game’s heights. The concept of NMH, of a loser assassin cutting his way through rivals and his own deluded take on the world, worked well as a vehicle for the gameplay and Suda’s whims. In trying to tell a story within that framework, it doesn’t always hit unless you’re on the same wavelength as what’s happening on screen.

For example, ahead of boss fights FU will usually get a heart-to-heart conversation with your upcoming opponent. This attempt to give each of them a level of characterization, but just like previous opponents in the series they exist to be stylish blood bags and more unique challenges than the typical fodder. It doesn’t matter when one of these aliens talks about a wistful childhood memory of a lighthouse, because the whole joke is how little that matters. It’s okay to not be in on the joke, as these often work within the context of the game itself, but in moments like these I couldn’t shake the feeling I was missing something or (and this is the real issue) just going through the motions.

For the record, though, I always welcomed the 90’s anime style credits that concluded each portion of No More Heroes 3.

The combat is, as expected, sublime. Cutting through aliens with your beam katana still has that visceral and empowering killer’s high behind it, fueled by visual and auditory flourishes that never seem to get old. Some of the fluff of previous games has been removed, making this feel like an improved and refined version of the first game’s combat. As a carryover from Travis Strikes Again though, you’re able to gain additional skills and modifiers via the Death Glove (taking the appearance of two legally distinct Joy-Con being worn on Travis’ left hand). It’s through that addition that we’re able to dropkick aliens into blood fountains, and I’m here for it. 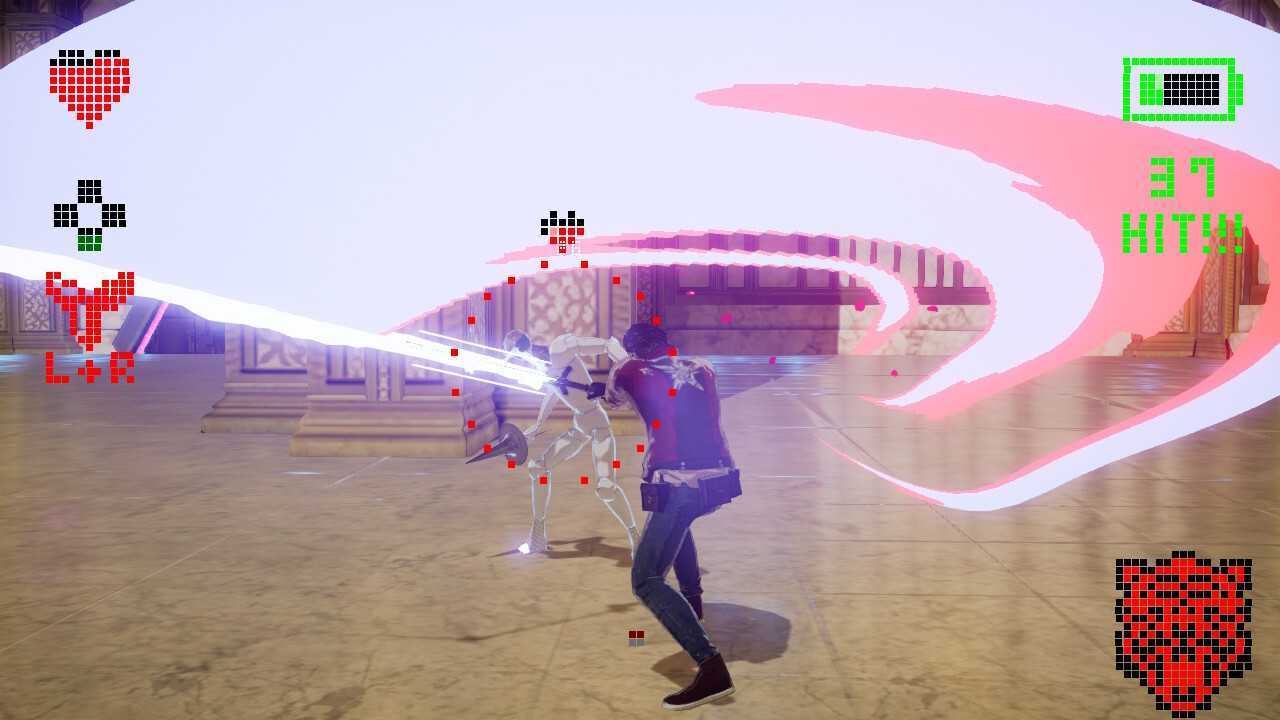 That rush may come most potently when carving through nameless hordes, but it’s the boss/ranking battles of No More Heroes that once again demand your attention and high performance. I died multiple times to the first boss while playing on the game’s Bitter (normal) difficulty. Which isn’t a complaint or criticism, just a preview of what’s to come as these fights ramp up and play with your expectations. Later bosses, and even groupings of more typical enemies, keep this trend going.

The Galactic Superhero Rankings, while highly imaginative in their designs and befitting of the game’s ramped up scale, didn’t quite have the same appeal as the first game’s UAA bosses for me. Aliens and city-leveling death beams totally work in the world of No More Heroes, but I definitely have a soft spot for the more “grounded” approach of the original. Certain opponents are more evocative of my expectations of the series, though, bringing on themed duals and giving Travis a chance to endear himself through character moments rather than just spout catchphrases.

Speaking of grounded, exploring Santa Destroy on foot and motorcycle has returned. The hub world is still mostly barren but feels more thought out in certain ways. Rather than one shop for T-shirts, you’ll revisit various friendly aliens as you complete prerequisite milestones to earn more threads. Missions (both combat and minigame based) are also scattered around town instead of being in a single location. Add in various collectibles, such as trading cards and scorpions (as ingredients for ramen, naturally), and it doesn’t quite feel as sparse or repetitive as the original game’s. 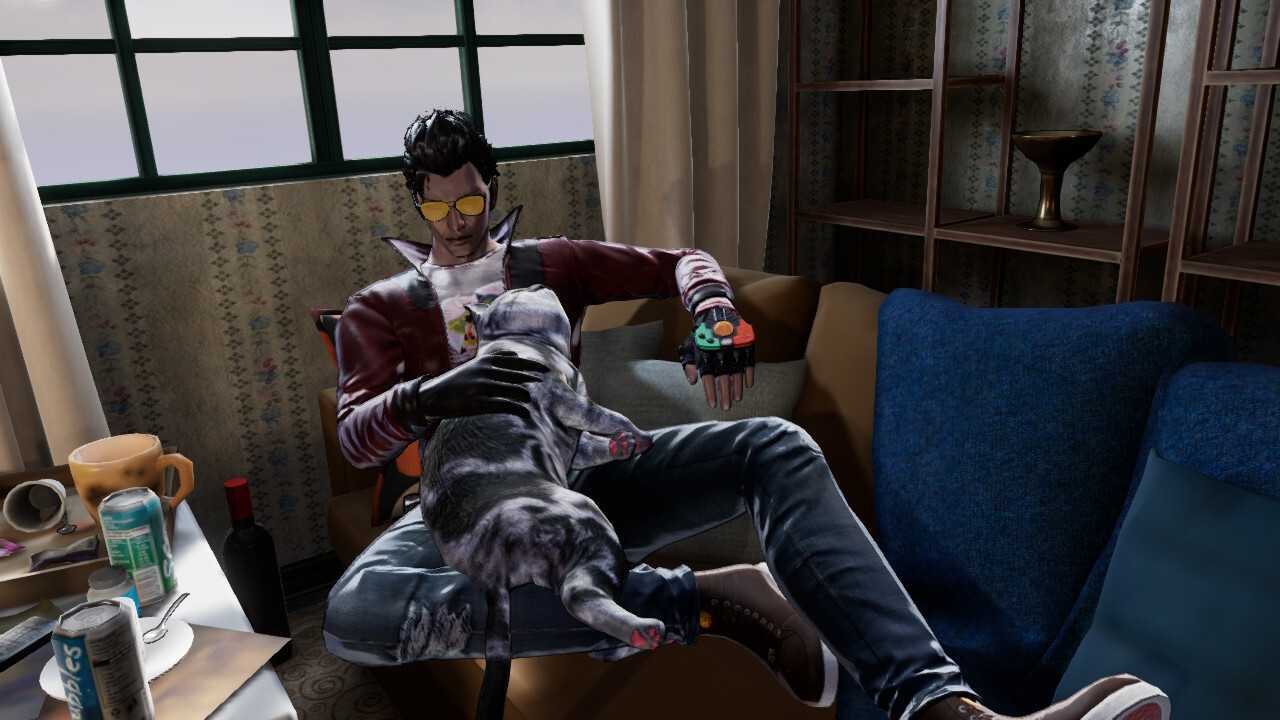 There are even new areas to explore, unlocked as you climb the rankings and each one being accessible via fast travel. This expansion to the No More Heroes world (and perhaps Travis’ own view of it) is welcome, though some regions do feel sparse in different ways even compared to this version of Santa Destroy proper. I’d have appreciated the ability to access NPCs and missions more easily, especially when bike controls remain stiff and minor collisions will send you flying off, bogging the process down even further.

And yes, the various odd-jobs are back. Lawn mowing is joined by some more unusual options, like firing a tank at encroaching giant alligators from the coastline and mining for ore. Conceptually I’ve never had an issue with these money-making minigames, but some of these are a pain to play. They’re also where the game feels most “off” from an engine standpoint. With how smooth combat is (in comparison), I have to assume that was the main priority. Everything else around it feels secondary (or even tertiary), which makes for an uneven experience.

Where there’s a noticeable dip in quality across all portions of the game is when playing handheld versus docked. Connected to a TV, No More Heroes 3 looks and runs quite well. This applies both in its moment-to-moment presentation, and its dalliances with more stylized visuals and medium blending. That’s heightened even more in combat, which seems to be the most polished portion overall outside of some stuttering when enemies spawn. Playing in handheld, some of that veneer is pulled away, with combat still holding well in terms of performance but looking more muted and rough around the edges. 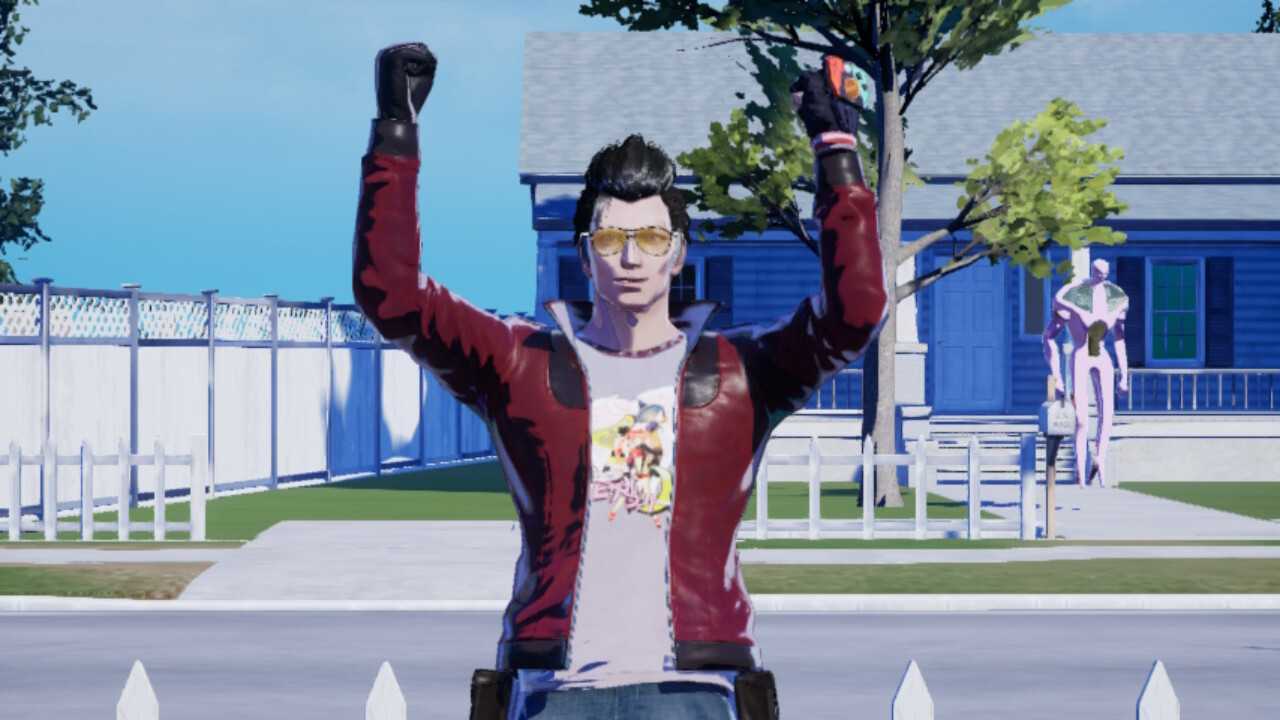 Ultimately, it’s how this performance dip pushes the already lesser parts of No More Heroes 3 further down that left a sour taste on the experience. When things do work it’s a pure rush of pixel-tinged adrenaline shot directly into the brainstem. When they don’t, it can be a choppy mess of missed punchlines and ideas that only persist for tradition’s sake. It’s all enough for me to look at it about as equally as the first game, though if that Wii-era darling didn’t grab you I wouldn’t expect its threequel to do so now.

All those criticisms are worth considering, but even all together they weren’t enough to make me stop playing No More Heroes 3. It hits the ground running with a strong start, stumbles somewhat in the middle, but managed to pull me back in — and I’m glad it did. 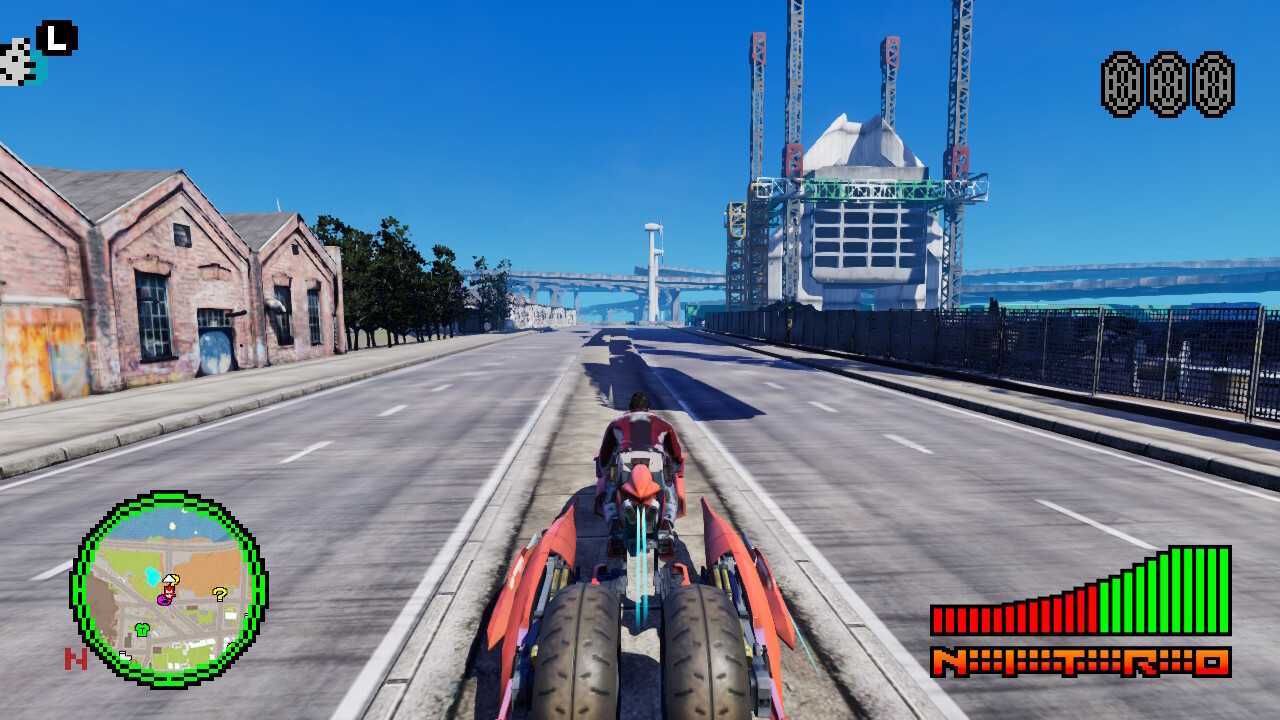 Nearly everything that I personally loved about the original is still here, but many of its faults are too. Though my patience for such things has thinned over time, my understanding and appreciation for something this unique has gone up. Even with this being my fourth go-around with Travis, there were surprises and new ideas to be found. Sure, you have to unclog a few toilets, but that might just be the price to order some sushi while listening to one hell of a soundtrack.

If you’re new to this rainbow-blood-soaked world you’ll be missing some context on certain characters (even Travis Strikes Again is essential for full comprehension), but this also manages to be one of the best examples of a creator putting themself into their work despite some frustrations along the way. When that creator is Suda51, you can’t afford to miss it.

Leave a Comment
Buy at Amazon Buy at GameStop Buy at Walmart
7.5