The Wii, like any Nintendo system, will be best remembered for the games published by its own creator. Like, who doesn’t love Super Mario Galaxy or Kirby’s Return to Dream Land, or Wii Music? Oftentimes third party titles can be a little more varied, though, and don’t endear themselves quite as well.

No More Heroes, thankfully, is a pure exception to that.

Barreling down the road and roaring like a tiger that’s just discovered Quentin Tarantino is Suda51’s pseudo satire, kindof straight action title. This was one of those “mature” Wii games, and I’d argue the most fondly remembered. Or have you thought about Red Steel much this console generation? 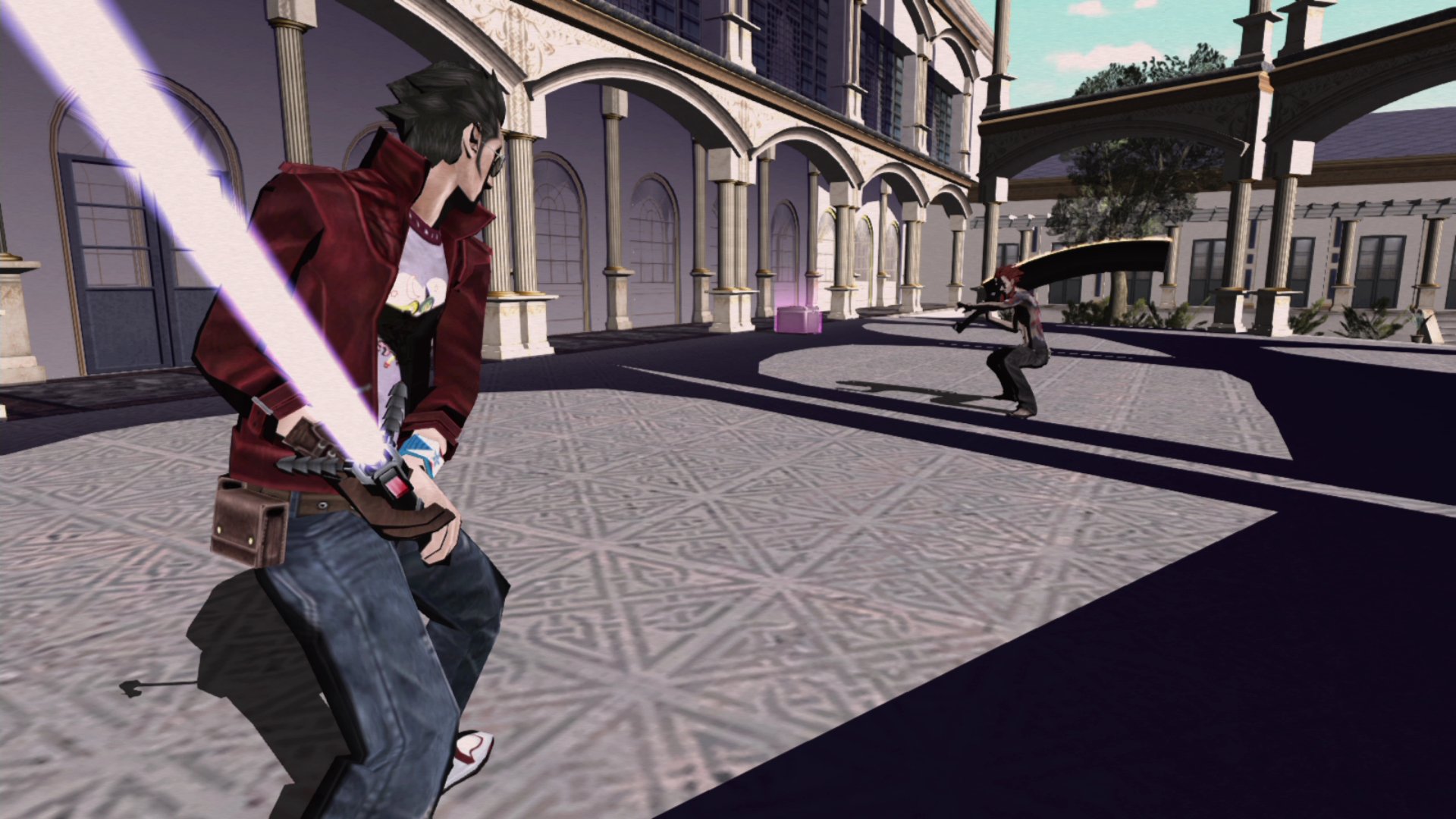 Now with No More Heroes III delayed into 2021, Travis Touchdown’s first two titles have simultaneously arrived on Switch to get players even more ready for goddamn superheroes. While they aren’t the otaku’s first games on the eShop (that’d be Travis Strikes Again, which had plenty of flash but not as much substance), these two are here as fairly straight ports of the Wii games. To get the blood pumping and spilling, I made my way back to Santa Destroy for the first time in over a decade to see how the original holds up.

On its surface No More Heroes is incredibly straightforward. Through buying a beam katana in an online auction and a chance encounter, Travis steps into an underground assassin ranking and takes the number 10 spot. From there he rises through the ranks, all in pursuit of more bloodshed and to be number 1 – and to get some action with United Assassin Association agent Sylvia Christel.

If you don’t know already, this is complimented by Travis being a complete and total loser by design. He spends all his money on anime merchandise, living out of a sparse hotel room with his cat. He exposits his own brand of warrior poetry and badass one-liners all while living out his delusions of grandeur and self indulgence to literally get away with murder. This contrast could be cringey and yet it’s the perfect compliment to the “serious” nature of the game and gives it an independant or B-movie appeal. 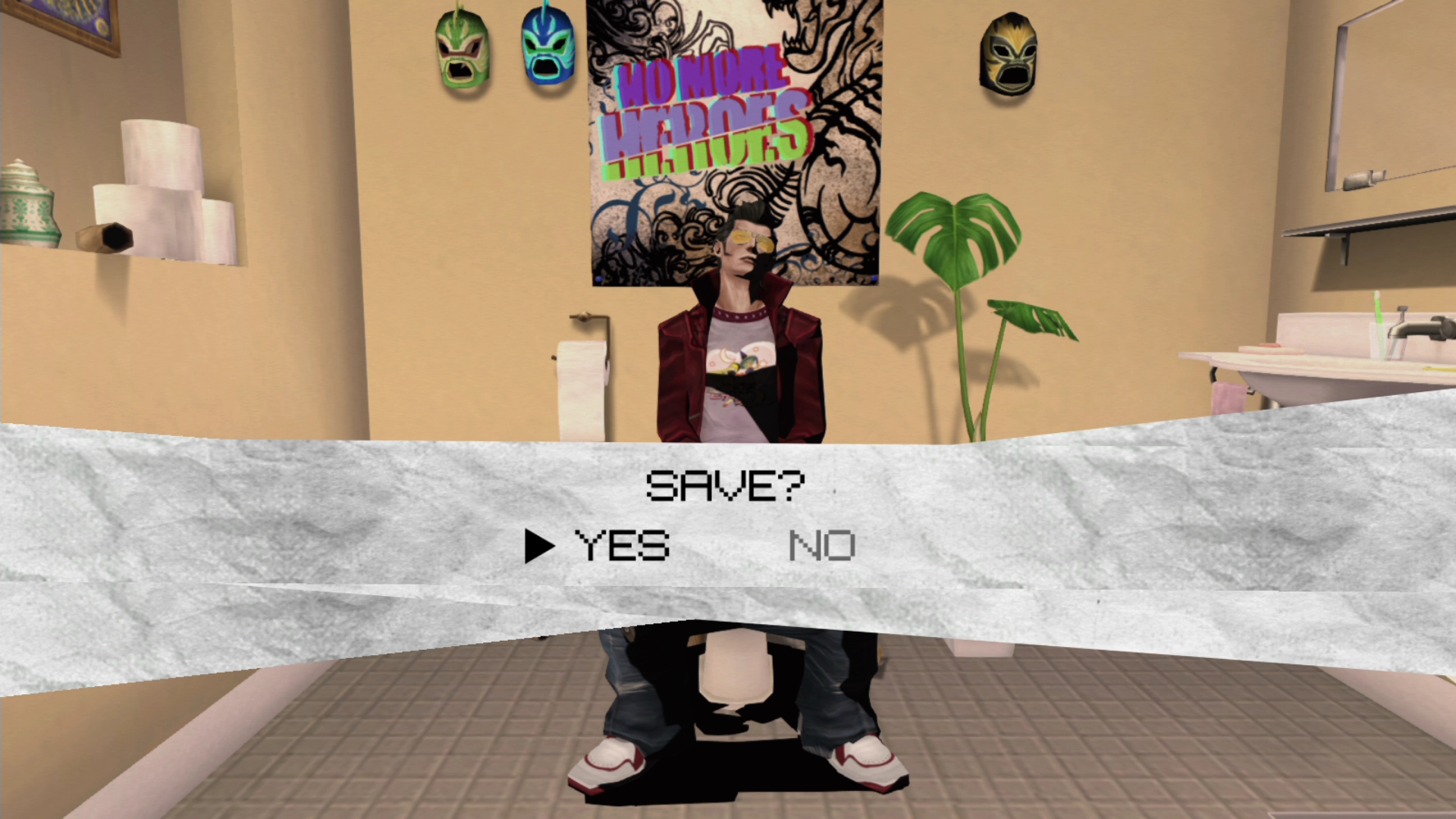 No More Heroes could be over in no time if it were just these ten ranked fights, but Travis is also a wage slave that has to pay his way into each match. That means taking on oddjobs like collecting coconuts or rounding up scorpions for pety cash, and somehow also gaining clearance to assassination missions with their own payouts. None of it needs to make sense, and yet thanks to overall design decisions and Suda51’s direction it becomes cohesive.

So with a split between Travis’ work as a killer and a partimer comes two different cuts of gameplay. When your beam katana is out, the game is an addicting action game where enemies heads are lopped off with ease and erupt into blood-fountains. All of this is enhanced by retro game bloops for sound effects and pixelated UI elements, reinforcing Travis’ skewed view of the world around him and being one of best Switch games in recent memory for playing with a pair of Joy-Con.

Since the original release was designed for the Wiimote and Nunchuck, playing with Joy-Con is practically seamless and dare I say enhanced by the newer controller. As soon as I picked them up I was slicing the air and shaking to recharge like it was 2008 all over again. If you’re returning to Santa Destroy for the first time in a long time that realization was the perfect strawberry on the shortcake to make this rerelease feel justified.

Each of the assassin duals that punctuate Travis’ climb up the rankings is a highlight in and off itself. Whether you’re facing off in a baseball stadium with a karaoke loving detective bemoaning an estranged relationship with his daughter or dodging human projectiles bashed your way by a baseball bat wielding drunk in a lolita dress – these all feel distinct and memorable even if a few feel more well done than others. 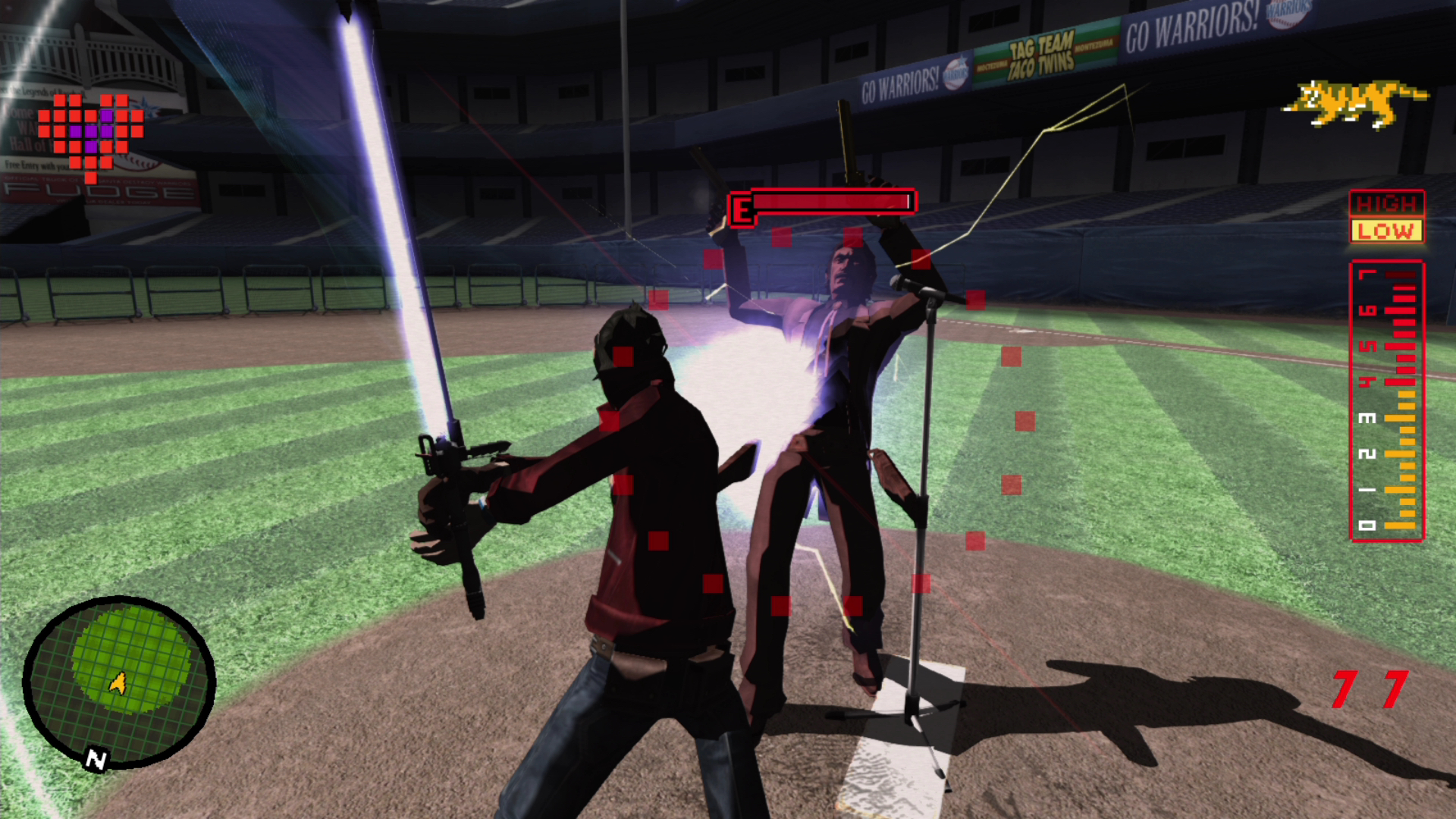 They’re also the main tests of your ability, as while the majority of encounters on the way to them are manageable with the same wanton slashing from start to finish, these require a little more thought and nuance. By the eighth ranked fight (your third boss) you better be comfortable, and future matches will either build upward from that or introduce their own unique mechanics to keep you on your toes.

All of this sounds like a great action game with a one of a kind aesthetic, and that’s definitely No More Heroes’ bread and butter. Along with it, though, comes the side jobs and wanderings around the game’s hub. The minigames themselves are fine – little oddities with some tedium that matches their place in Travis’ journey. What isn’t so acceptable is what it takes to get to and from them.

Santa Destroy is absolutely barren, with minimal music and only a few spots of true note. The emptiness is almost comical and could be argued to properly represent how mundane Travis’ place in the world really is. Maybe it serves as a palette cleanser between fights, building anticipation until you pay your entry fee. That shouldn’t be at the expense of overall entertainment. 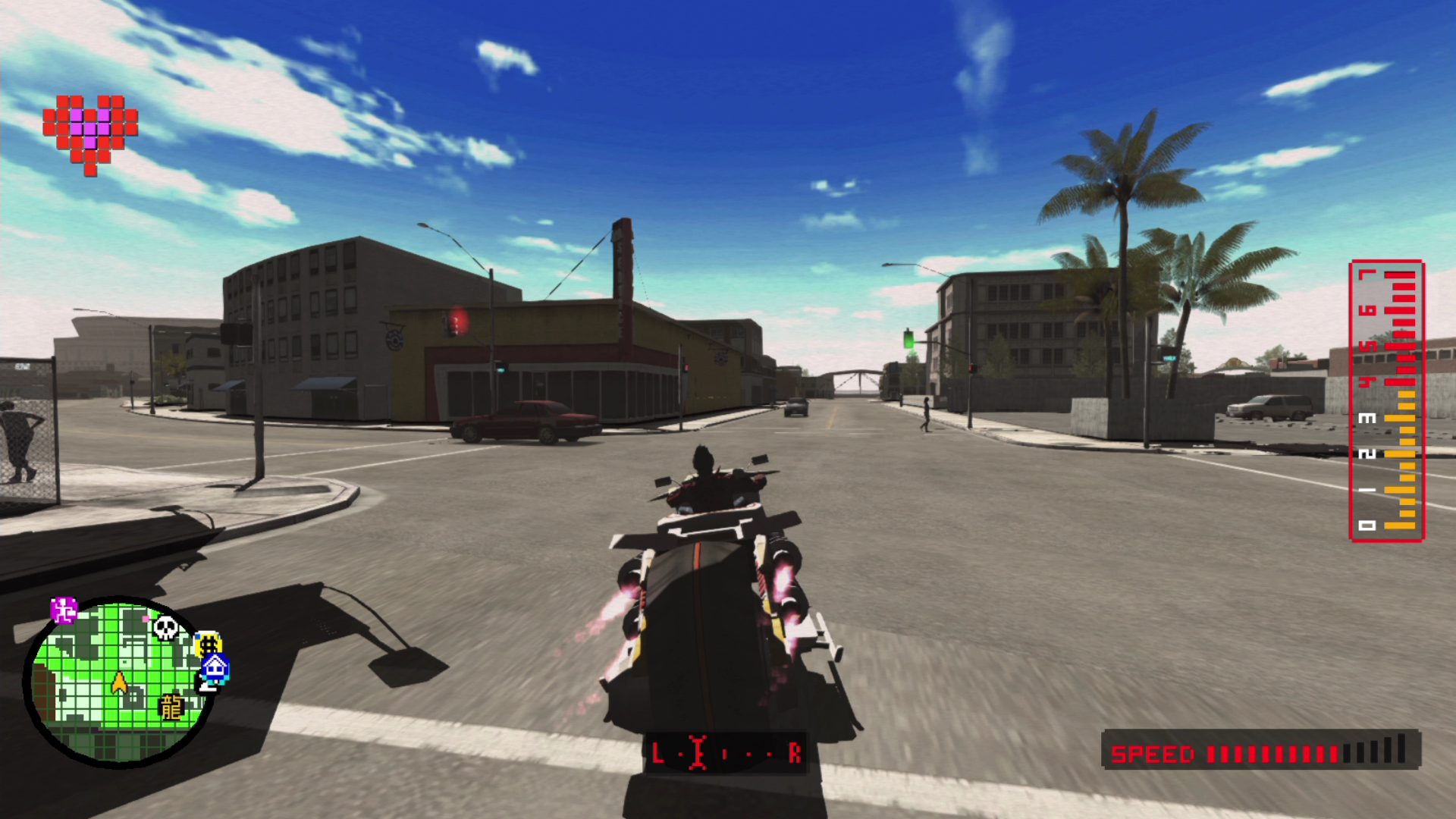 Travis does have a motorcycle for getting around, and there are dumpsters to kick open for cash and T-shirts. Searching for those on foot (at least until you unlock a dash) is borderline masochistic, yet No More Heroes knows I’m going to do it. So some of that distaste might be on my playstyle, but it’s present and anyone out for completion is going to hit that wall eventually.

It’s a shame too, as No More Heroes knows this is a complaint. When the game got its updated re-release on PS3 (No More Heroes: Heroes Paradise) it added fast travel, along with other extras and even the ability to refight bosses. This Switch port is instead based on the Wii original, which is good for anyone out for nearly the same Nintendo experience they remember but also feels like a missed chance to bring those features along.

Still, none of that holds back No More Heroes from being a game worth experiencing. There’s a reason we’re seeing a third entry in this series early next year, and Suda51 makes this game bleed his vision at every turn. Feed your cat before you slaughter hundreds, restart levels because you realize you missed a luchador trading card, and fall into the trance of the game’s infectious theme song.

Even though I feel No More Heroes 2: Desperate Struggle is the better put together of the two, if you’ve never played a game in this series the first gives an experience pretty much unlike any other. The high points and little touches carry this experience from beginning to end, and there’s a reason Travis Touchdown has endeared himself to the point of being a Super Smash Bros. Mii Costume. It can be rough around the edges and sometimes you have to put up with its pacing, but I encourage everyone to step into the garden of madness that is No More Heroes. 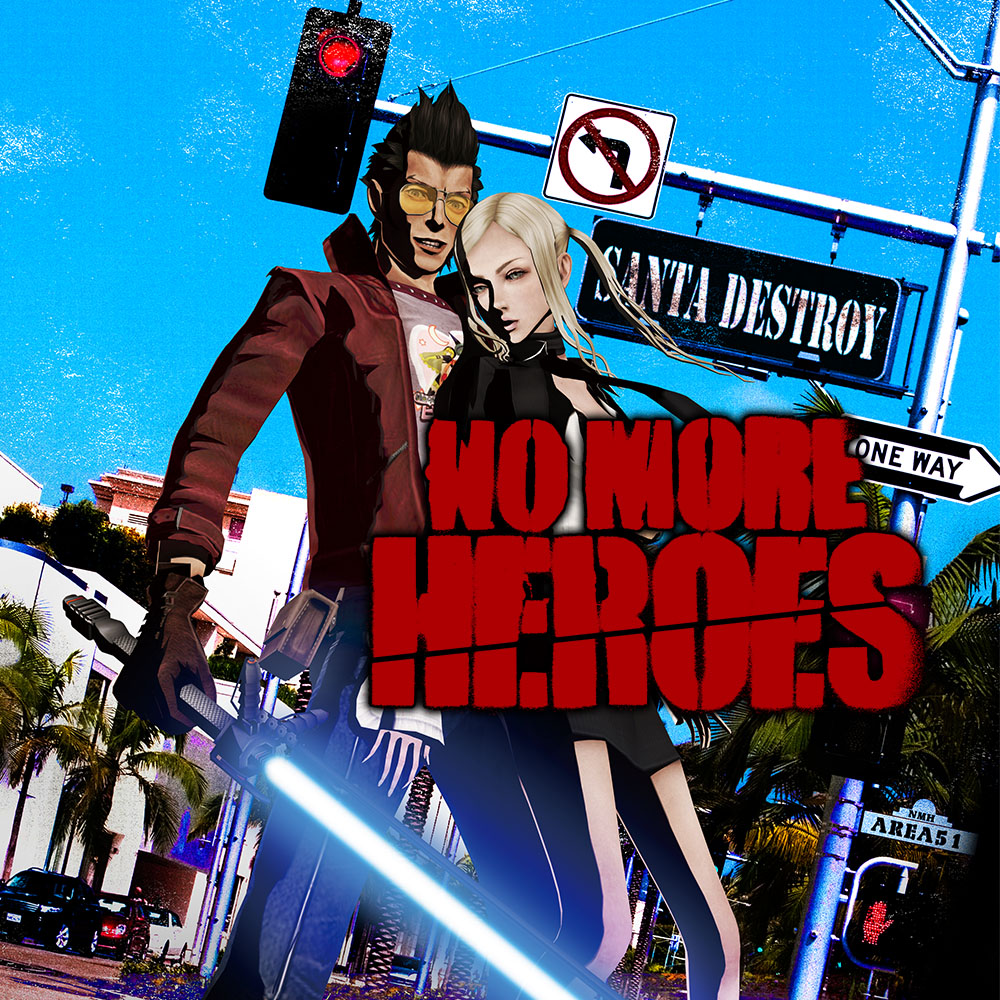