Review – NEO: The World Ends with You

Touch controls were everywhere on the Nintendo DS, but no one made them work like Square Enix. Don’t get me wrong, you could find other good, even great touch based games from other developers. But SE managed to craft an urban fantasy RPG that embraced not just the stylus but both screens and the spirit of a whole real world area. The World Ends with You remained a fan favorite for its gameplay, aesthetic, and music; and yet outside of ports and cameos it seemed the UG had gone quiet.

Now though, we have a long awaited sequel that picks up a few years after the original while also embracing the here-and-now in its writing and depiction of Shibuya. I’ve entrenched myself in these familiar streets to see if TWEWY still has that magic or if the series remains a one hit wonder. Even with some changes to the formula and all that time, the thing that’s most clear is that NEO: The World Ends with You was worth the wait.

The two most apparent things about NEO are how feature rich and full of style it is. It’s the perfect kind of sequel, one that aims to both emulate and continue what the first game started while developing that identity and player experience further. Carrying the legacy of the original seems at the forefront of Square Enix’s fully scanned minds, with the majority of gameplay ideas either returning or being adapted for modern tastes and expectations. 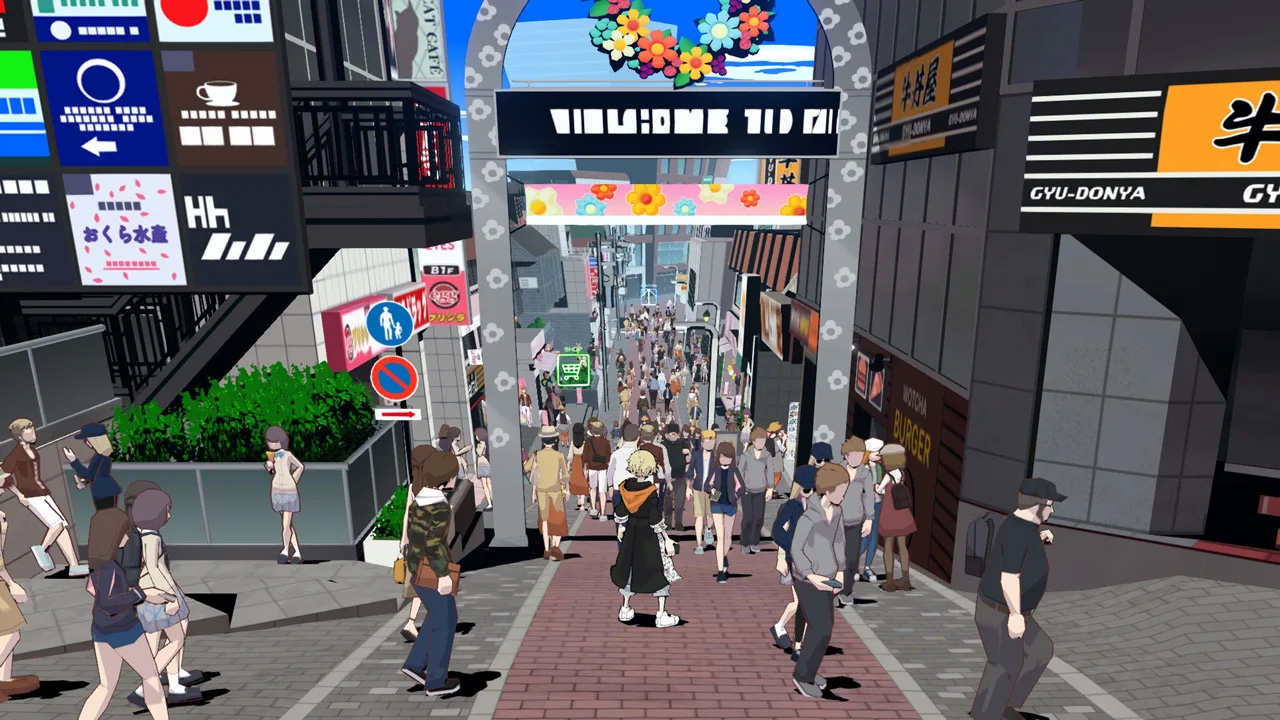 It’s in blending these facets that NEO TWEWY reaches its zenith, adapting traditional RPG mechanics and ideas into its own graffiti signature. The various sections of Shibuya become your stomping grounds, full of passersby to Scan and shops to browse. Though the game has transitioned to 3D, there’s a deliberate choice to use fixed camera angles. It might take a bit to get your bearings, but once you do, the flavor of each area and their real life inspirations shine through because of it. I do wish loading times between areas were a bit snappier, and it takes some time before you can run around more quickly, but once again Shibuya shines as a backdrop and driving force.

You and your crew are participating in the Reapers’ Game, a blend of battle royale and existential awakening orchestrated by self-important psychopomps. Each “day” of the game is a mission, often involving solving puzzles and discovering new information about NEO’s larger narrative. Often you’ll be using various psychic abilities to do this, including imprinting ideas into people and even rewinding time at fixed points to “re-do” the day. 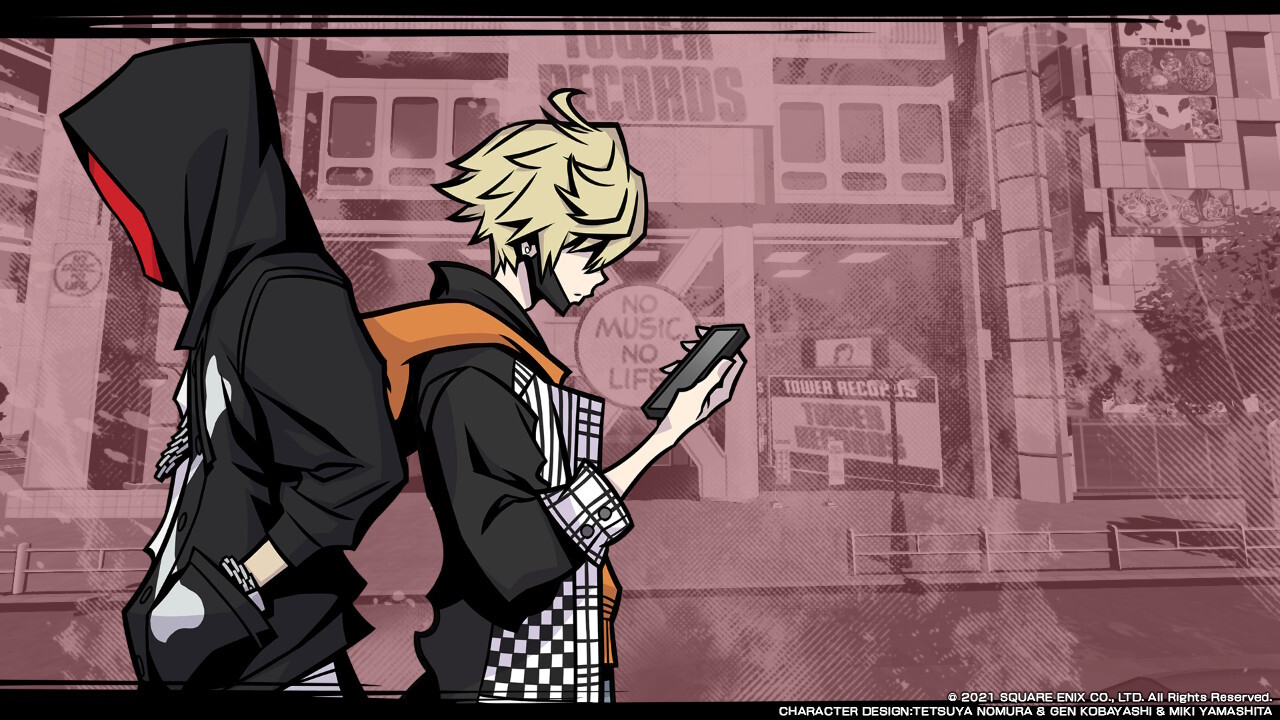 Over time you learn more about how and why this is all happening, but the game’s various mysteries do a fine job of gripping your attention. Pacing is occasionally thrown off by citywide scrambles, where the optimal way to get max rewards involves battle after battle. You can do the minimum and proceed just fine, and I’d advise doing so until you’re replaying or selecting individual chapters for completion.

Livin’ it up in the city

Leveling up only ever affects your HP, with individual character stats instead bumping up from eating out as a group. How else can I become more stylish if I’m not constantly consuming boba? 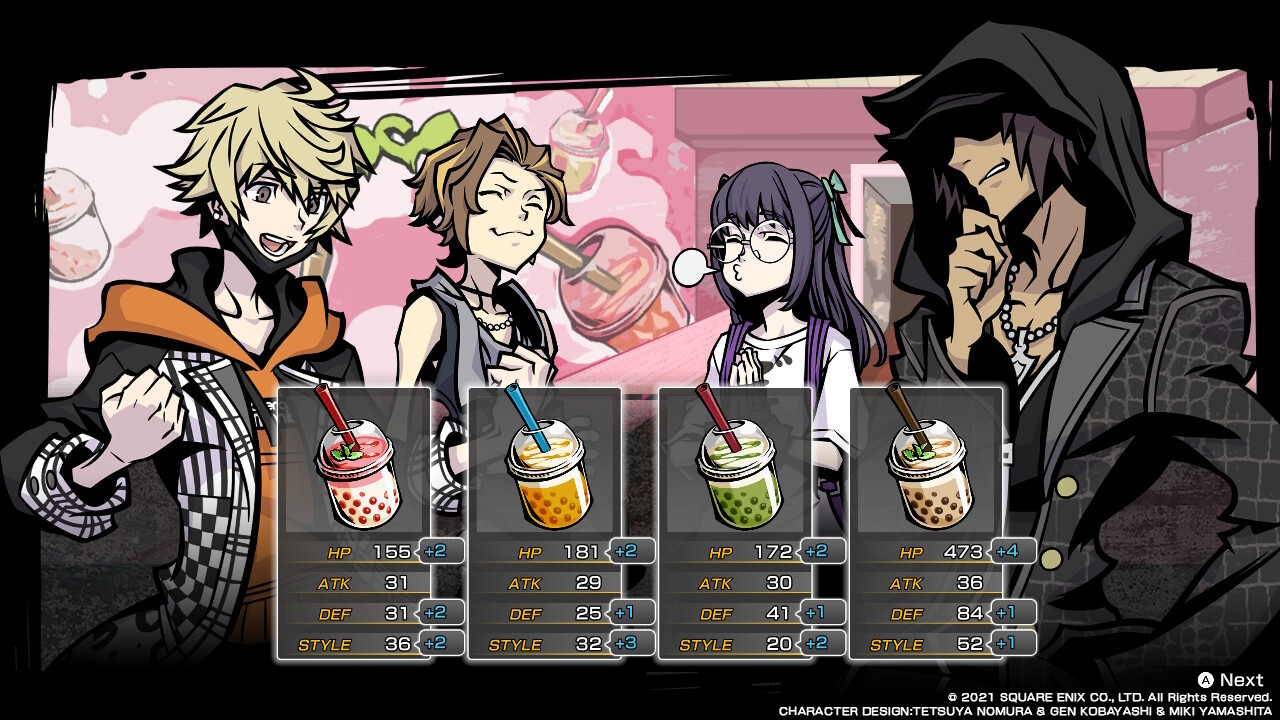 This gives way to one of my favorite mechanics, that being the ability to adjust your team’s level and the game’s difficulty. Doing this affects drop rates, meaning the lower your level the more plentiful your rewards. You retain your food-increased stats, with only your HP becoming lower to up the risk. Each of the four difficulty settings also has its own independent drops from enemies, encouraging you to adjust it regularly to gather up new attacks and more cash.

You’ll need that cash, too. Eating out regularly can get expensive, but you’ll want to be doing it lest your party ends up too weak for their own good. You’ll also be buying up Threads, pieces of clothing ranging from uniform and sensible to the highest of fashion. While functionally these are just pieces of armor, the game encourages coordinating outfits via attack type or brand-specific bonuses.

And yes, there are around a dozen fictional brands featured here, recurring at various storefronts and expanding their stock of clothes as you progress both the plot and your regular purchases. It’s not exactly at the forefront of the game’s story or fully forced on you – you can certainly just pick up bigger numbers instead of thinking about skills and abilities – but it does so much for the broader world building and TWEWY’s unique vibe. 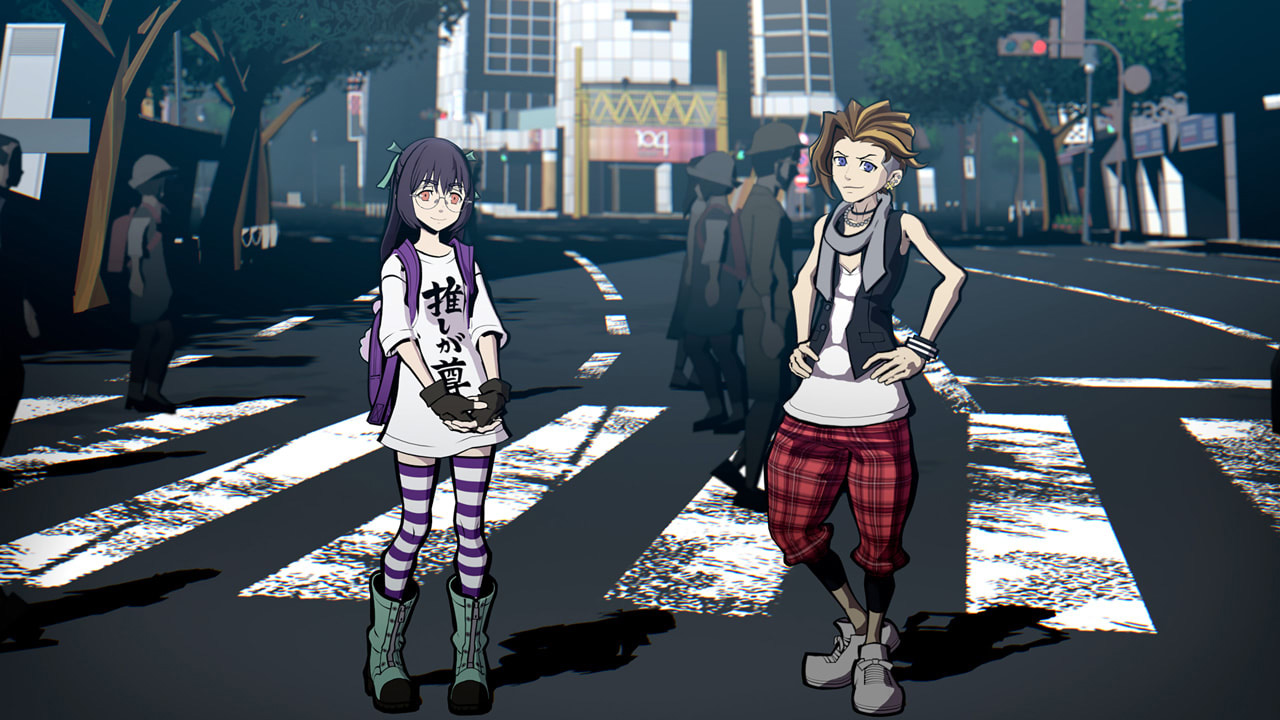 Those brands come into play with your super varied assortment of offensive options – Psyches. By channeling latent psychic energy through pins, your characters gain access to attack and support techniques. Even with combat occasionally devolving to button-mashing and some of the pins granting the same Psyches as others just with a different element, collecting and swapping these regularly kept me engaged, encouraging me to hunt down new pins in shops and from rare drops throughout the game.

You’ll be engaged in the game’s battle system plenty, erasing the musically-named and animal-themed Noise throughout your weeks in the Reapers’ Game. There are definitely some great ideas at work here, like being able to chain battles one after another to manipulate drop rates and difficulty even more, but at its core I can’t help but feel more attached to the original DS system. Back then it was all about swapping from screen to screen, giving battle a definite flow and making it stand out in the best of ways in an already stacked library of games. That’s more a testament to how well The World Ends with You utilized the handheld hardware, and doesn’t necessarily hold NEO back in its own right.

Anyone after that familiar feeling of passing light pucks between both screens, an analogous system is at work here where attacking enough times, or in a specific way, with a Psyche will prompt you to keep the offense going with another character’s attack. This fuels extra powerful Psyches and attack buffs, letting you better wipe the floor with Noise and other teams. Balancing your cooldown times and coordinating compatible pin decks is the meta-game here, and it’s a highly addicting one. I definitely saw some chains and boss fight failures because of experimental comps just not coming together, but I’d argue that’s part of the experience and spurs you on to put something fresh together next time. With how much you can tailor your experience (your level, your difficulty, your threads, your pins, chaining Noise), playing NEO: The World Ends with You never stops being interesting.

Credit where due, that also applies to the cast. Just like the first game you’re put into the freshly deceased point of view of a Japanese teenager that doesn’t quite mesh with the society around them. Lead character Rindo may not be as figuratively and literally prickly as former protagonist Neku, but his growth carries your own time in this urban afterlife.

The supporting cast work well as well, carrying quirks and being more dynamic compared to Rindo’s more withdrawn demeanor. There’s something lost structurally in the transition from having a single partner that changes over the course of the game to a multi-person group, but what’s gained is welcome. 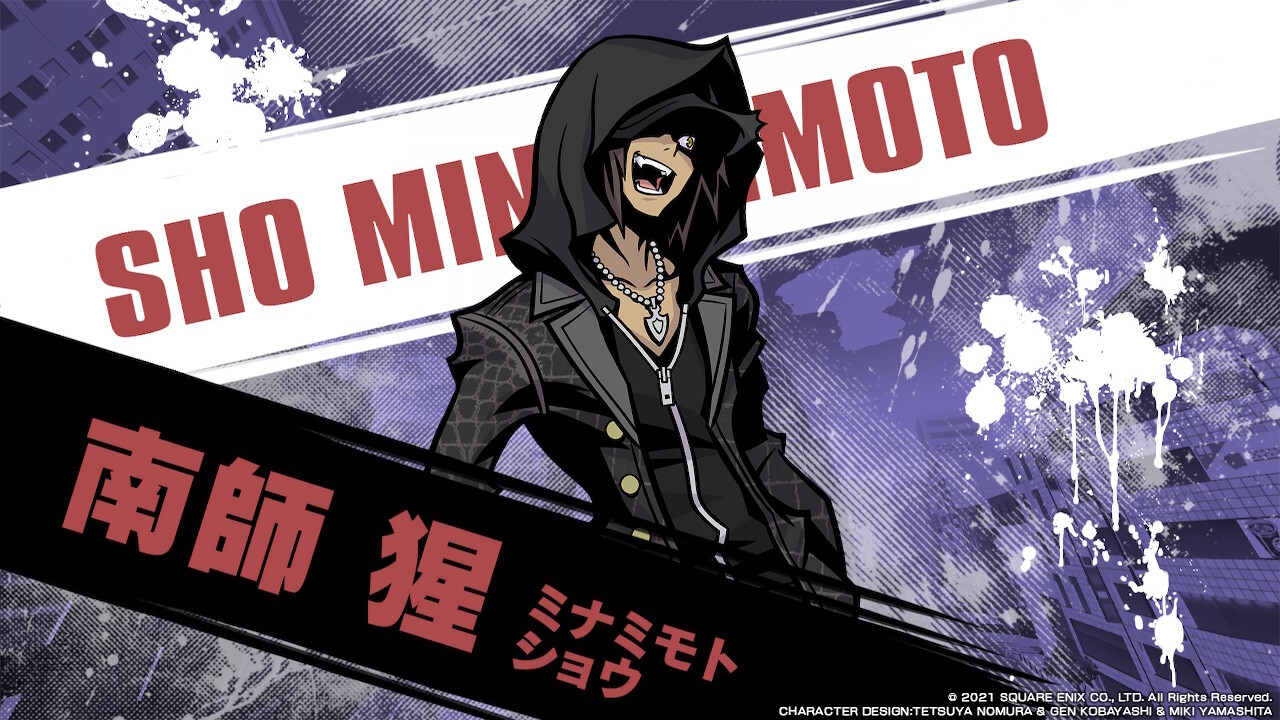 In TWEWY every other character more or less revolved around Neku, sharing their personal stories and circumstances to spur his growth. NEO instead makes the Wicked Twisters as a team the main character, with everyone having different dynamics and back-and-forths that aren’t limited to a single stretch of time. The contrast between Rindo, his extra extraverted friend Fret, their new ally Nagi, and the independent variable that is Minamimoto gave way for strong dialogue both in lighthearted moments and the game’s heavier plot beats.

That and a whole lot of math references.

There’s an added layer in the fact that this series relies so wholly on reflecting when they were made. Even with gameplay that’s stood the test of time, there was a definite sense of TWEWY being “outdated” when it recently came back as Final Remix on Switch – apologies to anyone that still loves their old flip phone. Some of that has carried over into NEO, mostly because of reused terminology, and in the long run it’ll be interesting to see how the sequel fares against changing times and trends. 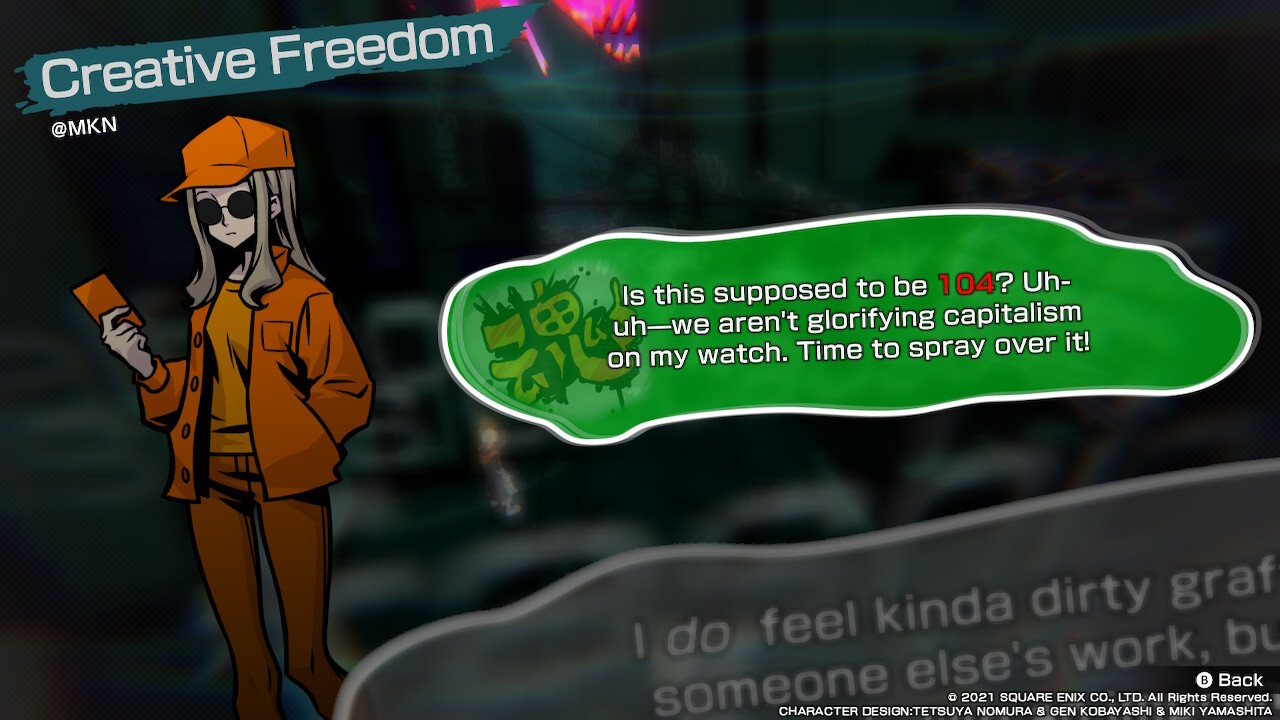 What hasn’t changed is how absolutely stacked the soundtrack is. Songs for exploring Shibuya and battles are infectious, fitting right in with the original in this regard. There are even new remixes of those, and they still manage to hit just as hard both for carrying the action and sticking with you well after you’re done playing. You absolutely need to play this one with the volume up, or you’re missing out on a core part of what makes these games so great.

Finally, I want to single out all you completionists out there. NEO is not only full of things to collect and progress – pins, threads, songs, character relationships, Noisepedia, graffiti – it tracks every single one individually. Yeah, it’s cool that you ate every single food in the game, but did you get every enemy’s drop on every difficulty at Level 1? You can ignore all this if you so choose (or if you can bear to let yourself) but seeking out every last percentage point and record in the game can easily fuel repeat playthroughs and push playtimes into triple digits.

NEO: The World Ends with You manages to hit its streets running by maintaining everything interesting, unique, and enjoyable about the first game. The changes in hardware and playable characters have tweaked things slightly, but it feels like positive growth that improves the series or at least puts a fresh, wicked twist on it. Following up on a cult favorite game over a decade later is no easy feat, but Square Enix have done it as well as I could imagine.

It’s my sincere hope that the series doesn’t take nearly as long to continue, and with the recent anime and a whole lot of merchandise in Japan supporting NEO there’s some potential for a brighter tomorrow in Shibuya. Whatever ends up happening, don’t wait that long to get onboard with the series – broaden those horizons now, and enjoy it all now.