With how many Mario spinoffs there are it’s easy to forget that they aren’t all made equal. For every Mario Party 2, there’s a Mario Party 9, making me second guess when I should get excited. The Mario Tennis series has been on a losing streak for a while now, with the Wii U’s Ultra Smash standing out as a low point, especially when put next to the excellent N64 version or the RPG-esque Game Boy titles. Mario Tennis Aces manages to avoid both of these poles, making for a back and forth rally of great gameplay and presentation held back by its modes and options.

The bread and butter of Aces is its core tennis gameplay, building off the foundation of its predecessors to bring the most polished video game tennis I’ve ever played. Multiple shots are available, each with a powered and not powered version, as well as the ability to charge them up for more pronounced effects. Even with the simplicity of the sport at a surface level, the tight and fast gameplay makes the matches exciting again and again.

New here is the presence of a meter, building up based on your performance on the court as a match progresses. It gives you access to two key skills: the Zone Shot and Zone Speed. Your Zone Shot allows you to fire off a super fast and strong shot from a first-person view, letting you pinpoint where you want it on the court. Zone Speed, on the other hand, slows down time to let you get in position for a clutch return, particularly to counter Zone Shots. 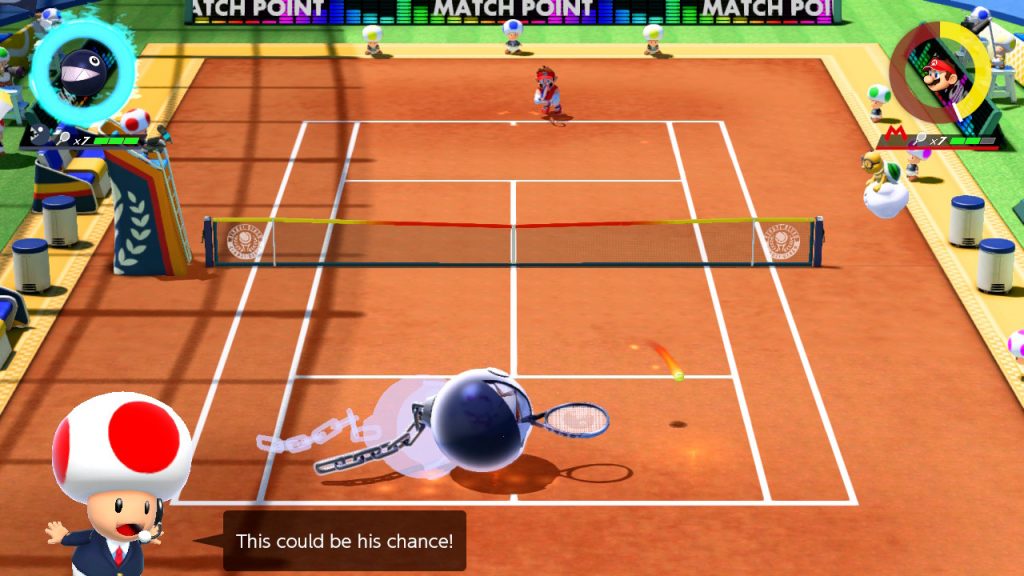 You can also pull off Trick Shots, well spaced and timed returns that see your character perform a unique animation (Waluigi moonwalking needs to be in more games) to both give your character another defensive option and, when timed perfectly, build up a ton of meter. The last element in all of this is that your rackets have “health bars” that deplete bit by bit if you can’t return Zone Shots properly.

If you really like being flashy there’s also the Super Shot, requiring a full meter, letting you return the ball no matter what and cutting off a whole racket from your opponent if they can’t block properly. Altogether, these add several new layers to matches, making them into a race to build meter, maintain racquet health, and fully take control of the match’s flow. 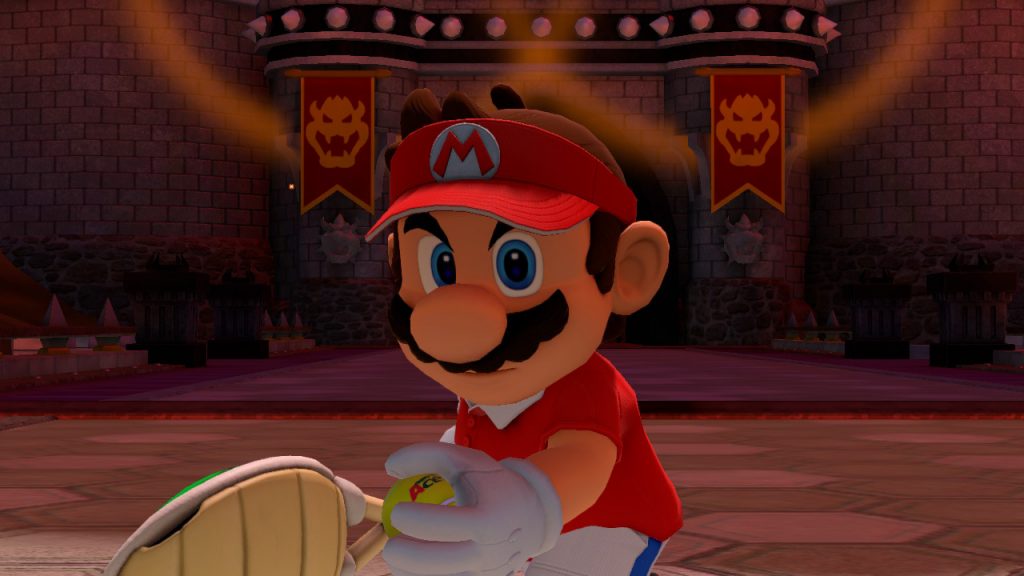 It’s these elements that have drawn people to comparing Aces to a fighting game, a point I definitely agree with. To me this is a good thing, but more importantly, it shows growth of the game in a positive way. Everything looks and feels great without being overpowering and removing the fundamentals of the game. These elements make the game perfect for multiplayer-minded fans who can get some friends together locally or online. That said, even when it utilizes this same gameplay, the single-player portion feels somewhat lacking.

When first started up, Mario Tennis Aces wastes no time getting you involved with its Adventure Mode, a series of stages held together by a loose story. There’s an all-powerful ancient tennis racket named Lucien who has Wario, Waluigi, and Luigi under its control; and it’s up to Mario to stop it from gathering the five power stones it needs to throw the world into some kind of ill-defined tennis calamity. It was all forgettable, but as a means of getting through its challenges and throwing an occasional chuckle-worthy line your way, it works. 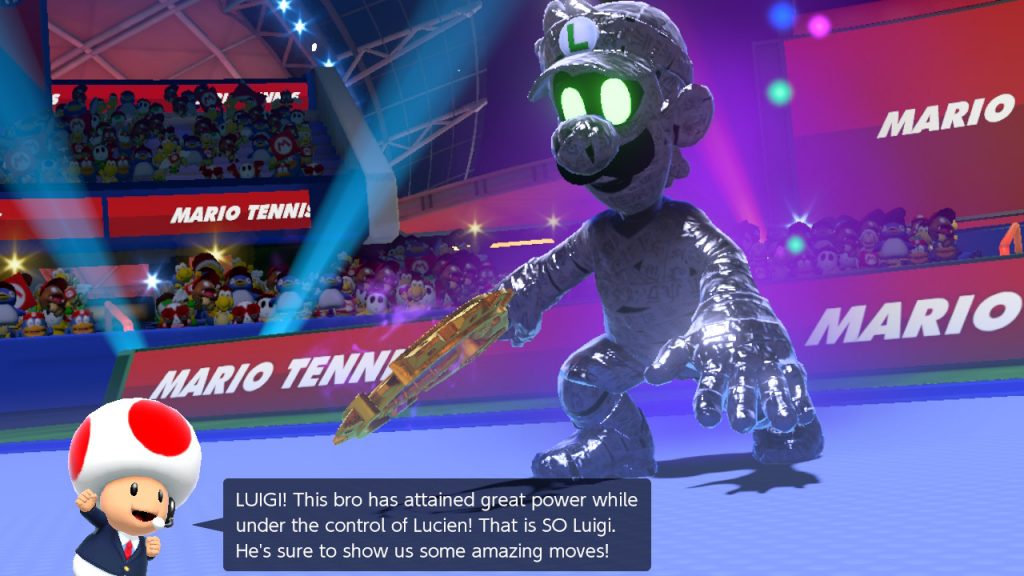 Even though there’s a presence of points and stats for Mario, they don’t quite make the cut when it comes to serving as a customizable RPG-like mode. The effect of the content’s growth wasn’t exactly pronounced, even when you’re gaining experience for each attempt — where the mode really shines is how it makes you as a player grow.

The stages in Adventure Mode range from simple matches, needing to hold a rally for long enough, hitting specific enemies on the other side of the court, and a few others. It all starts easily enough, but it also does a good job of showing you the differences of certain shots, how to hit certain spots of the court, and where to place yourself for a return. Even if you’re only here for playing with friends or in online matches, I would say Adventure’s worth at least one go-through if you want to sharpen your skills.

The road to online victory

Nintendo is pushing Aces as a new online title, meant to stand alongside the likes Splatoon 2 and ARMS, and now that it’s been out for a couple weeks I can say it fits in with the others most of the time. Compared to the online beta, the matches I get haven’t had any noticeable connectivity problems. The connection indicator when searching for games can be a bit finicky, but even the over-the-top Super Shots don’t bring any slowdown. 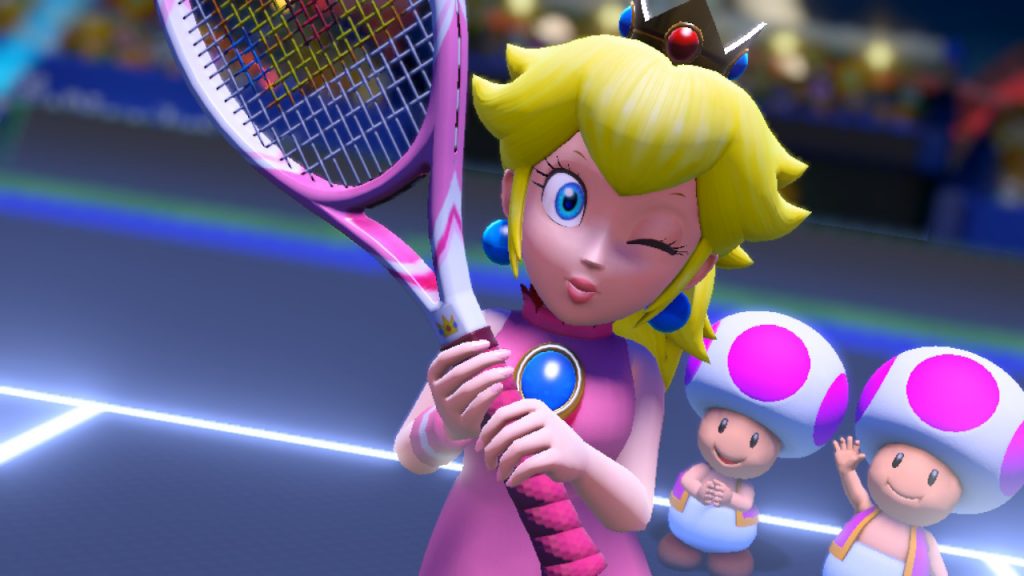 The main online offering are Tournaments, functioning like seasons where your progress and rank rise along the way. I’ve had some of the best, most intense matches over potential tournament cup wins, sets and games being traded back and forth and coming down to the tiebreaker wire — and it’s in these moments that Mario Tennis Aces serves as one of the strongest competitive experiences I’ve had in a long time.

My biggest complaint with the game though isn’t over something new, but something lost from the older games: the variety of options available when setting up a match. There’s no way to adjust the number of sets in a match or games in a set, and there’s no easy way to outright pick your court (which also sets your ball speed and bounce). They’re confusing omissions from offline play, and ones I hope Nintendo fixes through an update soon.

Mario Tennis Aces stands as a return to form for the series’ gameplay, serving a new, top spin on the sport. There may be some faults with its modes and options, but that doesn’t make the meter-based tennis any less fun for local and online matches. It’s the perfect step forward for the series, even if it doesn’t manage to overtake all of its predecessors. With a single-player mode that doesn’t reach the heights of older entries and the omission of options that had been commonplace before, the worth of this one depends on how driven you are by planned, recurring tournaments. Given some updates and the same kind of content support seen in other Switch games, Aces has the potential to still become the smash hit its gameplay deserves. 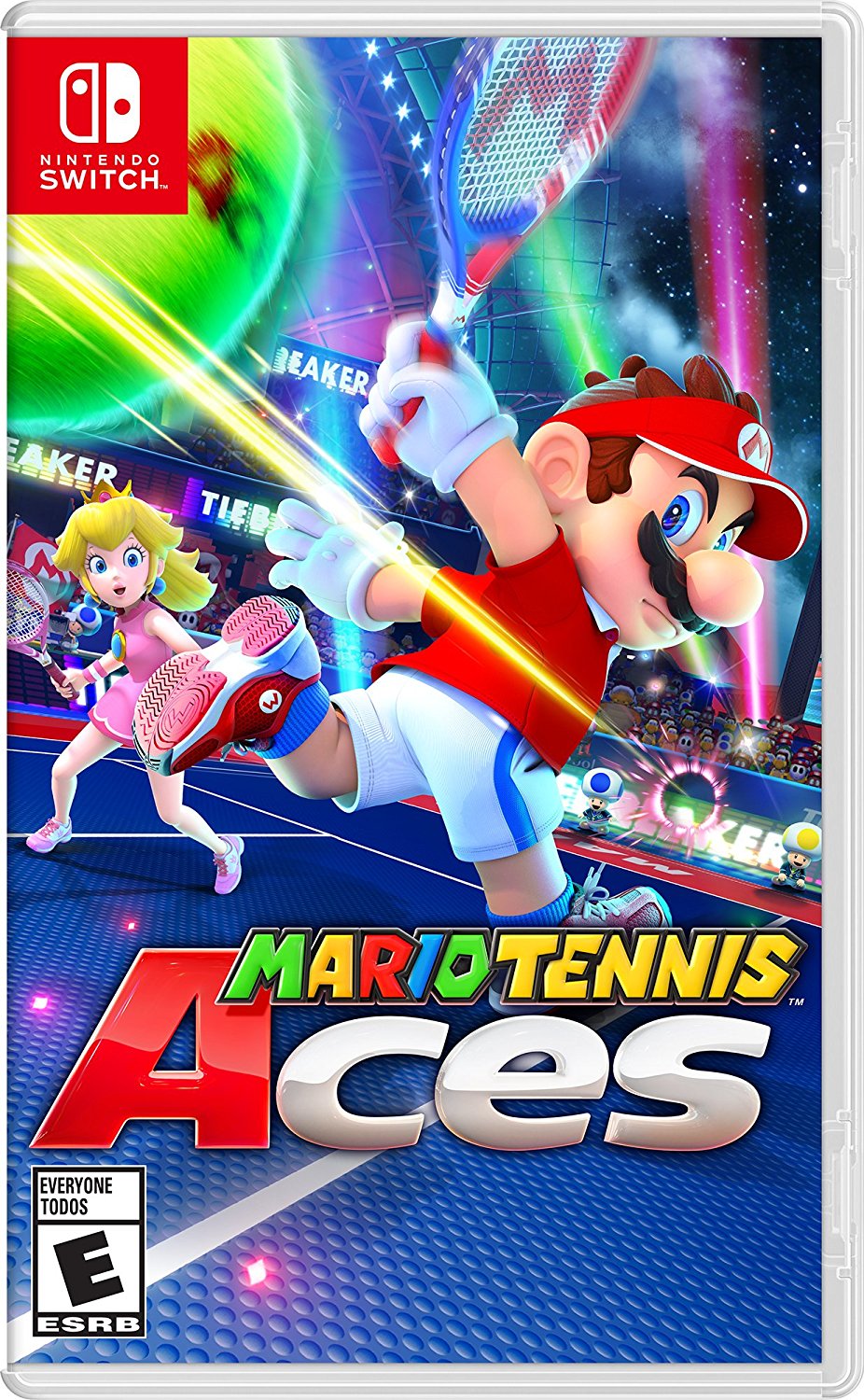