Of all the things Nintendo announced back in February, reviving a dormant Mario sports franchise after 15 years was one of the most surprising. Super Mario Strikers has long been one of my go-to GameCube games when looking to get a bit nostalgic with my family, and nostalgia tends to set a high bar. Going into this review I knew that more Super Mario Strikers is exactly what I was looking for, and I did get it with Mario Strikers: Battle League, though I also found a few things that left me wanting just a little bit more.

Much like its predecessors, Mario Strikers: Battle League resembles soccer/football only in that there are two teams trying to get a ball into a goal. Most characters do use their feet to accomplish this, but others are happy to use their hands to smack the ball around, or even just pick up the ball and run with it (looking at you, Wario). It’s also much more violent than actual soccer/football and with classic Mario items like Bob-Ombs and Shells flying every which way, things can get extremely hectic and frankly it’s downright delightful. Each team is composed of five players, four of ten classic Mario characters on the pitch and one non-playable Boom Boom as the goalie (RIP Kritter, you had a good run). I personally feel that I should mention that Daisy is nowhere to be seen at this point in time, which feels like blasphemy considering she really came alive and made an impact in the first Super Mario Strikers. 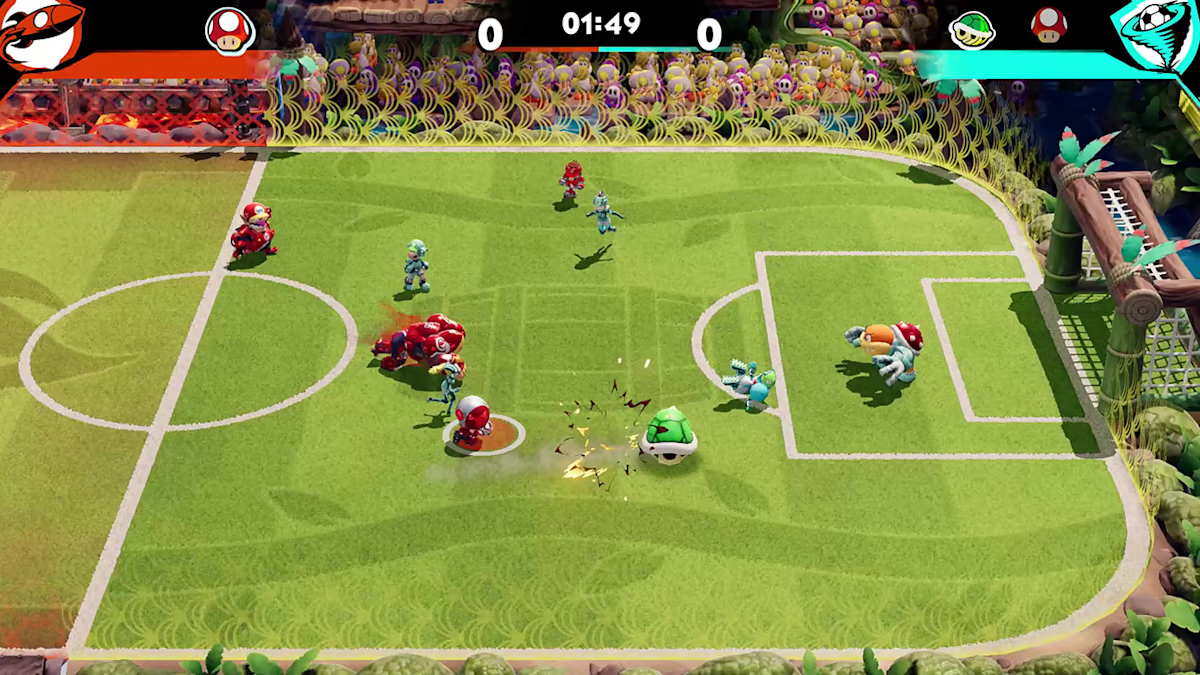 Each playable character has specific default levels in each attribute that make them better than others at one or two things. These attributes – Strength, Speed, Shooting, Passing, and Technique – can also be augmented with different types of gear. Each piece of Gear typically boosts one attribute at the expense of another, meaning you can min-max each character to really suit their playstyle, or switch things up to suit your own playstyle.

The characters also each have their own unique Hyper Strike, a special shot worth two points instead of one, that can be executed after someone on your team collects a Strike Orb. Holding down A after collecting a Strike Orb will bring up the Hyper Meter, where you’ll attempt to stop a moving needle inside of the two separate blue sections of meter. If you’re successful, you’ll perform an unblockable Hyper Strike; though the further the needle is from the blue sections of the Hyper Meter, the higher the chance is that your opponent’s goalie will block the shot. 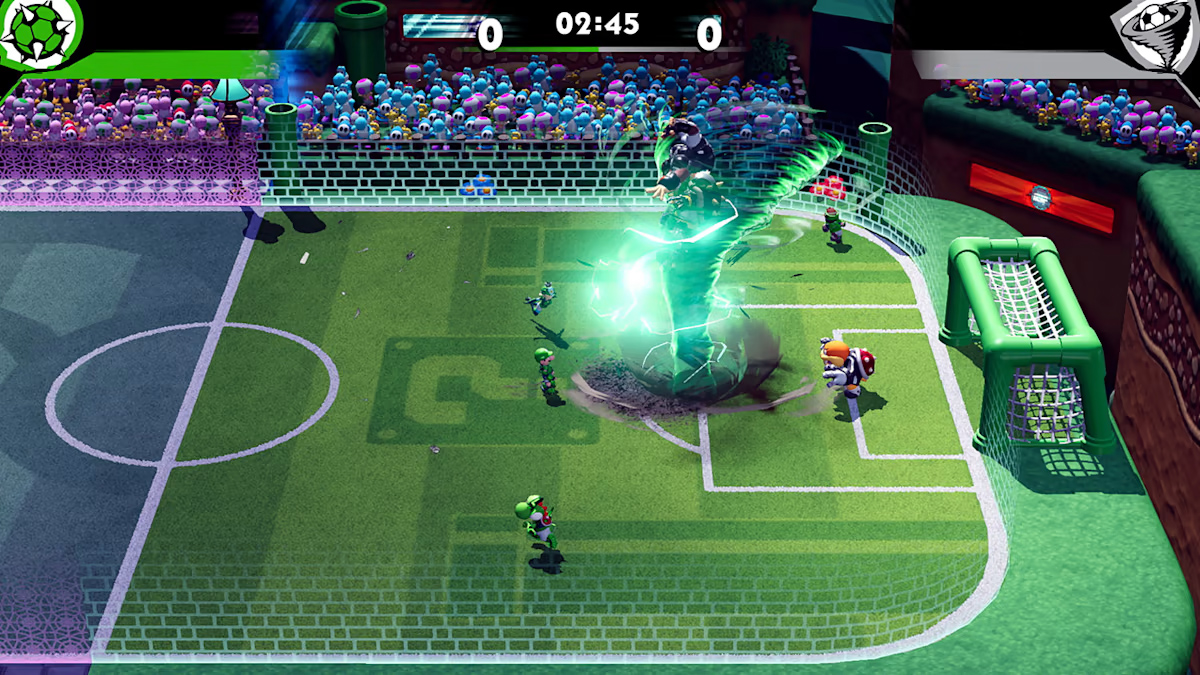 The gameplay in Mario Strikers: Battle League is unexpectedly complex, with deep mechanics like Perfect Passes, Perfect Shots, Perfect Tackles, and more at your disposal to get the upper hand. This deep gameplay makes Mario Strikers: Battle League a blast to play once you dive in and really get the hang of everything, but I also found during my time reviewing the game that it provides a pretty high barrier for new players learning the game to feel comfortable. The tutorial is top-notch, covering just about every mechanic you can think of with detailed steps that let you get the hang of the mechanics before moving on. The problem is that if you’re planning on Mario Strikers: Battle League being a fun little party game, you’ve either got to let each new player have their time with a pretty lengthy tutorial, or let them flounder with mechanics they don’t understand and still try to have fun. Neither option is perfect in a scenario where a game that feels better to pick up and play (e.g. Mario Kart) may be more suitable.

Somewhere I feel that the Mario Strikers series has always struggled a bit is with single player options, and you won’t exactly find anything different here. There are initially five cups on offer, each of them a double-elimination tournament with four teams in total. The five cups each feature opponents that specialize in one of the five attributes, and besting these cups will reward you with coins to buy Gear for your characters. Completing all five cups will unlock a sixth Championship Cup, where you’ll take on more well-rounded teams. 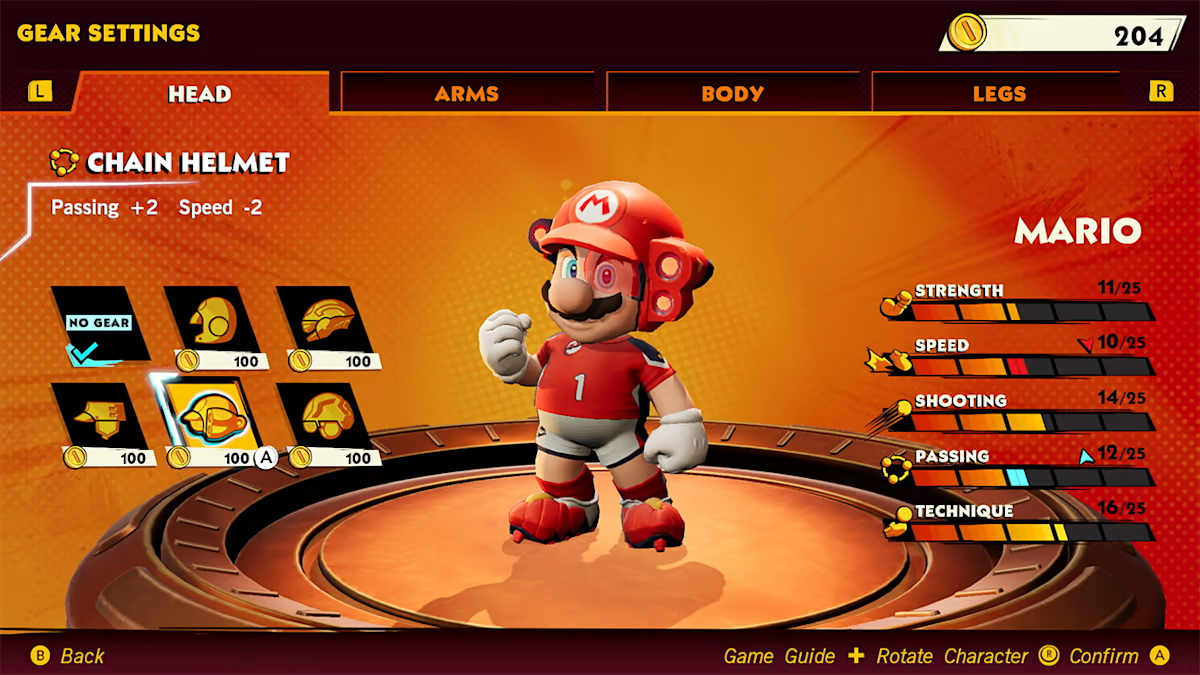 The initial offering of cups shouldn’t be too difficult for anyone who’s spent enough time with the game, and clearing them all unlocks the only real offline unlockables in the game: the option to purchase the secret Bushido Gear set and a whole new difficulty that is another experience entirely. Galactic mode is waiting for you after beating the six Normal Mode cups, and while it features the same six cups as Normal Mode, the teams are all kicked up a notch or two.

Galactic mode is going to be a challenge for anyone who hasn’t mastered the mechanics of Mario Strikers: Battle League, but it will reward 1,000 coins to spend on unlocking Gear to those who beat each cup, for a total of 6,000 coins. Beyond those coins, unfortunately, there are no additional unlockables for beating the worst single player has to offer.

Be a Team Player

One of the best things about any Mario sports game is often the multiplayer, and Mario Strikers: Battle League is no exception, with plenty of options on offer, both local and online.

The local multiplayer supports up to eight players on one console, provided you have enough controllers on hand. You can also use multiple consoles for local wireless, with up to four consoles with two players per-console. In multiplayer, players are free to join either team, either teaming up with each other to take on CPU opponents or going head to head against each other. Playing on one team with less than four players does get a bit confusing, as it’s hard to manage four characters between two people without perfect communication, though in a larger group of people the confusion can lend itself to the entertainment pretty well. Communication would still be key with a full four-player team, but keeping in sync might be a bit easier if you’re only worrying about your own character. 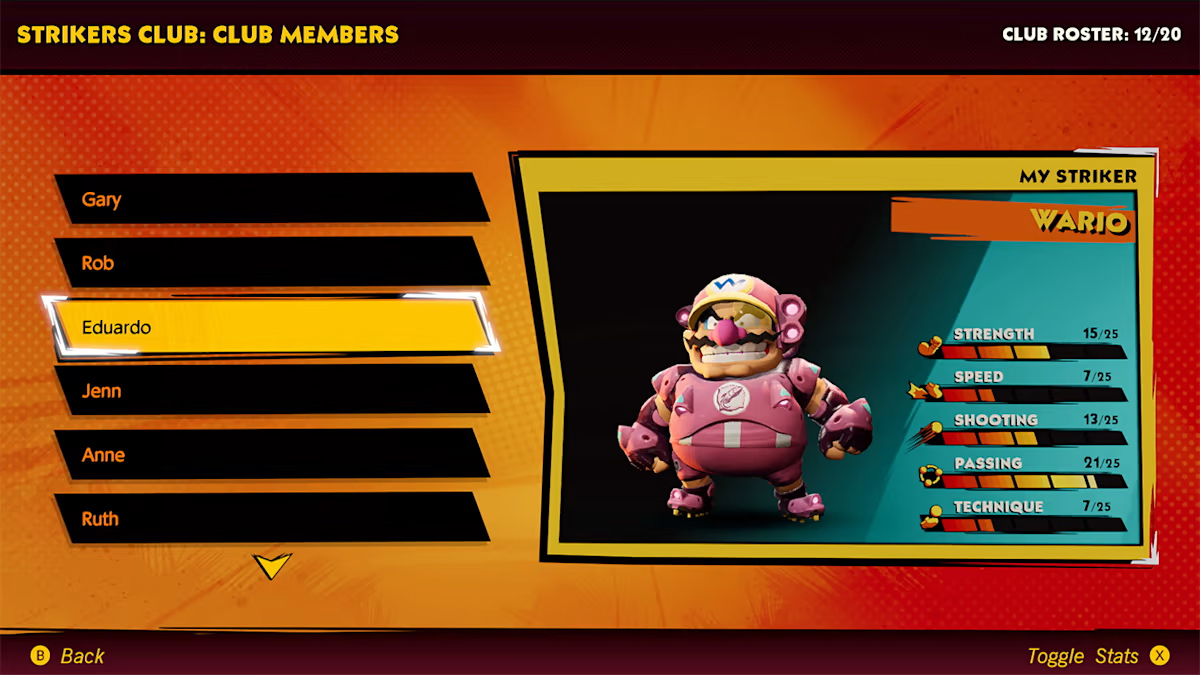 The online multiplayer also offers a few options in both the Quick Battle and Strikers Club modes. In Quick Battle Online you and up to one local friend can play random opponents, or you can join with a friend online to take on random opponents. Battle Friends is also an option, allowing you to create or join a room with your friends online in order to face off against one another.

Strikers Club offers the real meat of Mario Strikers: Battle League’s online potential, allowing you to join a club of up to 20 players, competing for glory against other clubs in the league. Once you join or create a club, you can create a room or join teams with other members, allowing you to compete together. Competing in Strikers Club will earn tokens for your club, which can be spent on cosmetic customizations for your club’s own stadium, which you can then use elsewhere in the game.

Strikers Club is a very fun concept, and I love the idea of customizing your own stadium, but to get real enjoyment out of it you’ll probably want to be part of a very active community, otherwise you’ll find yourself playing solo against other teams who may have the advantage of having more human players on their team. I ended up creating my own club, since only the owners of the club have ultimate say over any of the customization options, and have yet to have anyone else join it over the last few days, which has led to some frustrating online matches against teams that are far more coordinated than one guy trying to control all four characters.

The initial announcement of Mario Strikers: Battle League had me very, very excited to see a new entry in this series after 15 years, and while I’m not exactly disappointed at having what feels like more of the same in my hands, I also feel myself yearning for just a bit more. Minor changes like the removal of Kritter as the goalie (how cool would it be if the game eventually adds goalie options?), and larger changes like the removal of one of Strikers’ most iconically aggressive players, Daisy, have me wishing this would have had a bit more time to cook, or at least more players and gear on offer. 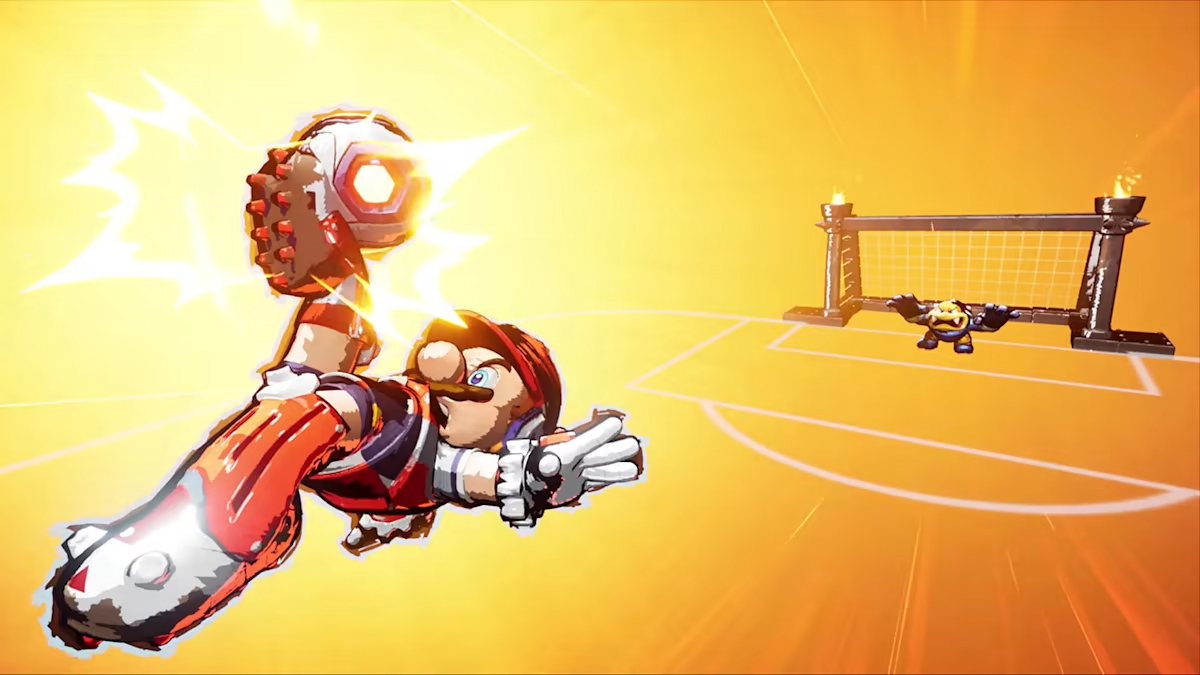 For better or for worse, post-launch additions have become commonplace for Mario sports titles on Switch, though, so we’ll see what else comes to the game down the line. Despite the shallow offline single player mode, overall I’m enjoying my time with the game on my own, especially when I play online. However, I’m finding that the deeper, more complex mechanics are a definite barrier when it comes to casual play, making it hard to recommend this as a “bring-all-your-friends” party game, though by all means it feels like one on the surface. 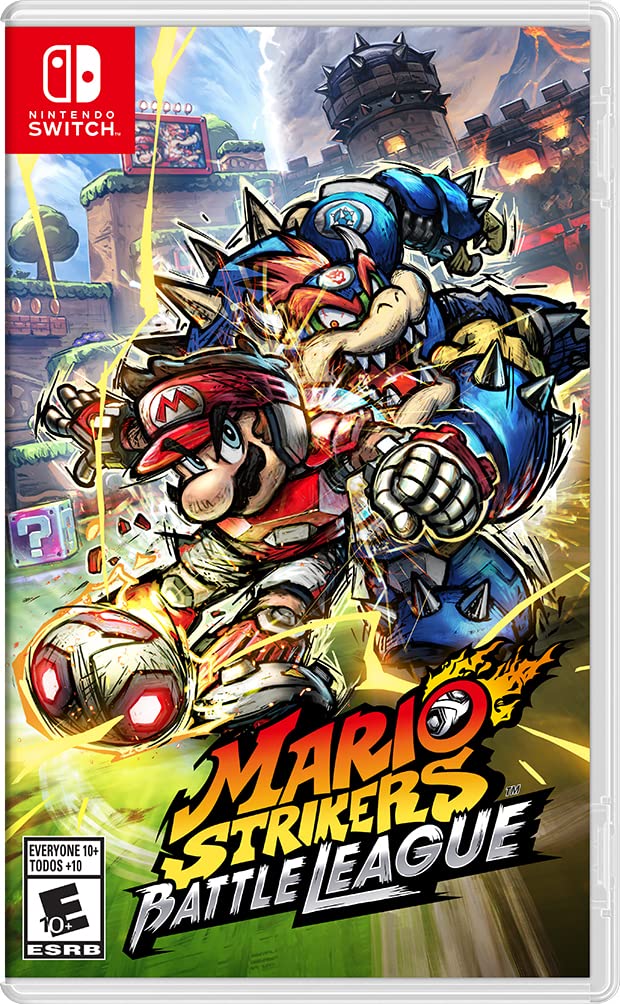