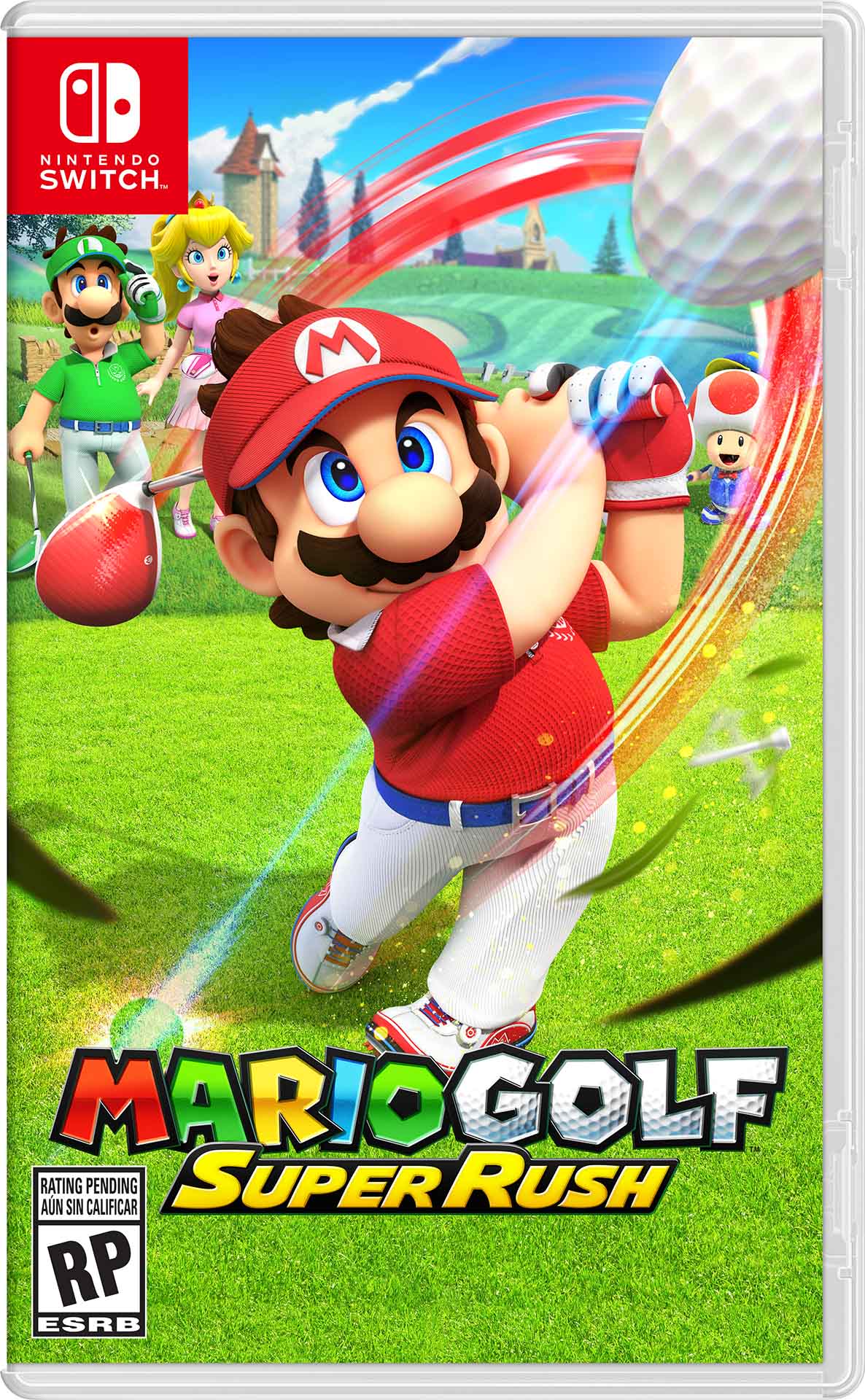 About three years ago Nintendo and Camelot doubled up for the Switch’s first Mario sports title. Mario Tennis Aces enhanced the core gameplay of that series, giving it meter management and more techniques to master for even the most ardent athletes. It may’ve been held back in some ways, but it saw healthy post-launch support and plenty of multiplayer get-togethers on my end.

Now Mario Golf: Super Rush has teed off, bringing Tennis’ sister series to Switch with a similar structure and approach. Just like in Aces, Mario and friends are looking fantastic on the fairway and have some new tricks for the tried and true game. There are still some setbacks, and its single player approach is streets behind its predecessors, but Super Rush still remains an enjoyable way to hit the links.

Before diving into modes or any penalty strokes, it’s worth noting that the core golf gameplay has seen some changes yet remains as enjoyable as ever. The shot gauge is now vertical along the side of the screen, and will change visually to denote your shot’s flight path. If your ball lands in such a way where uneven terrain will cause it to curve, the meter will be curved to show you. It’s a small change, but one that made planning shots more intuitive. 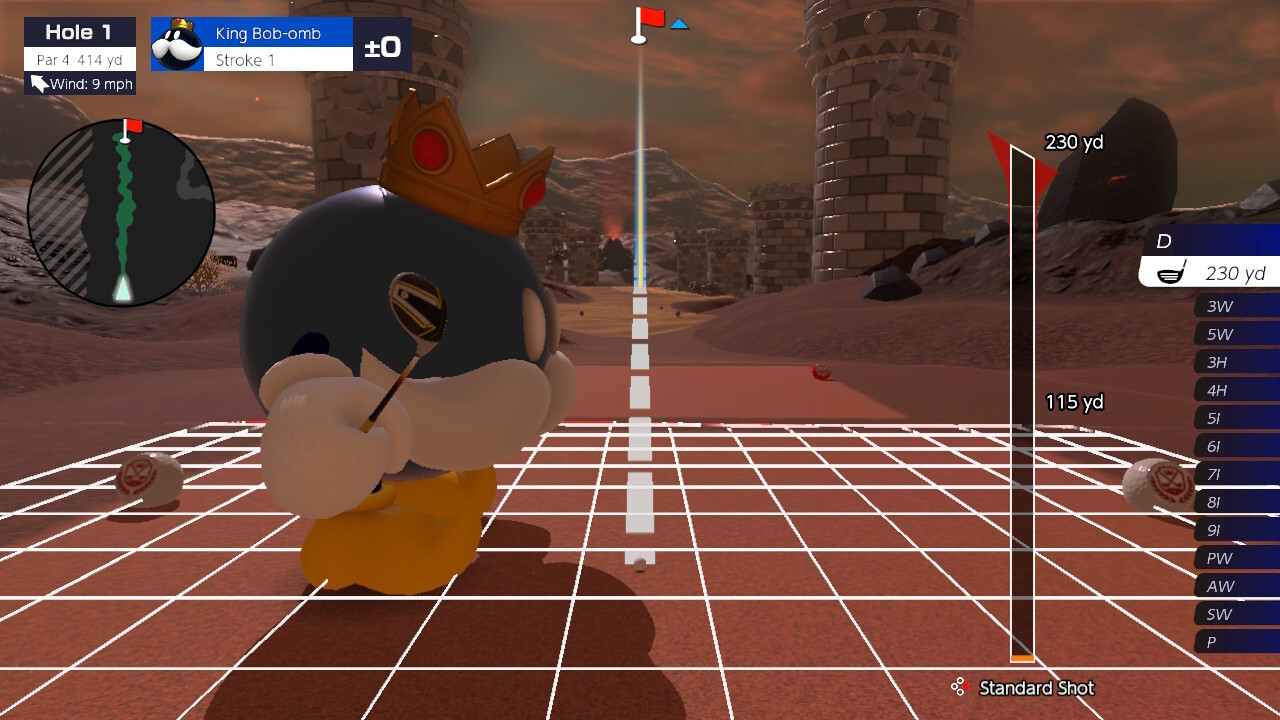 Things like topspin and backspin are still applied through certain button presses as you set your power, but more dynamic ball control is achieved through control stick directions. Depending on a character’s unique stats they may have more influence over trajectory, letting you pull off some extra fancy shots. That, along with the game’s focus on choosing specific clubs in specific situations to avoid going completely off course, gives players more fine control over their performance than ever before.

This may all sound daunting but it’s presented piece by piece in the game’s single player mode, which we’ll get into shortly. As far as intuitiveness goes, these changes are subtle enough that coming in with former Mario Golf experience will serve you well but should be adapted to to best suit your score. None of these changes are very “Mario”, but it does make for some of the finest tuned video game golf I’ve ever played.

Picking up the pace

What pushes those mechanics from golf to Mario Golf can be found in Super Rush’s new modes: Speed Golf and Battle Golf. As much as I’ve loved the series in the past, multiplayer could be on the slow side since everyone would have to take turns – just like real golf. Speed Golf instead has everyone tee off simultaneously and then sprint their way to their ball once it’s at rest. It’s still ideal to wrap up a hole in as few strokes as possible, but suddenly you’re racing up to three other golfers at the same time. On top of that you have to manage both stamina and energy meters for extra flashy techniques.

These Super Dashes and Super Shots aren’t just for show, either. Though they lack the nuance of timing that came with Aces’ own over the top techniques, they allow you to manipulate your opponents’ balls and positioning as you go. Boo, for example, is able to haunt balls so that they curve no matter what – extra devastating if you’re trying to sink a putt. Experimenting with these and their effects is as much a part of picking your character in these modes as their other stats or clubs, though if you’re a purist you can always play a round of standard golf instead.

Why do that though when you can Battle Golf? Speed Golf may be an inspired way to spice up the traditional game and quicken its pace, but Battle Golf puts an entirely new spin on things. Rather than shooting from hole to hole on a defined course, you’ll be placed in an arena full of obstacles and with multiple holes present at once. The goal is now to claim holes for yourself while your opponents do the same. That means dealing with all the usual golf elements, Special Shots and Dashes, Chain Chomps, Thwomps, Bob-ombs, and up to three other golfers all after the exact same thing. 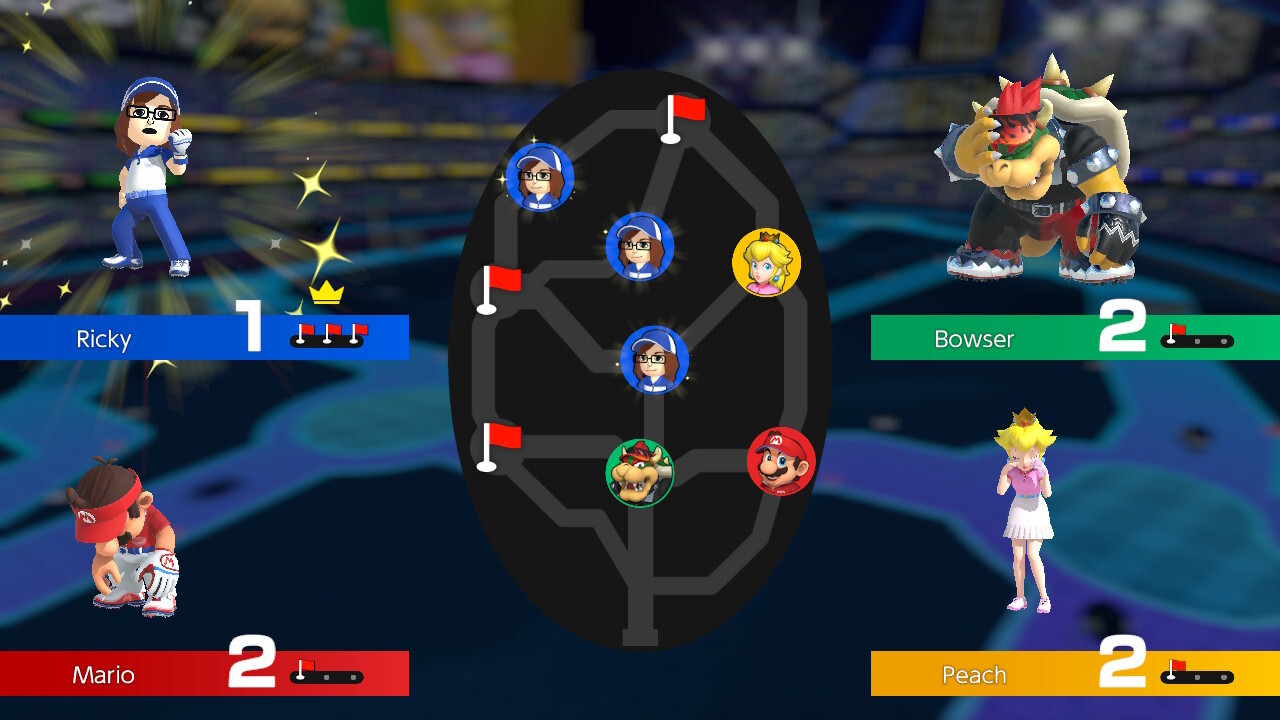 It’s not overly complex once you’re accustomed to Super Rush’s new mechanics, but it’s simple arcadey fun in the best of ways. It’s a shame only a couple arenas are present for it at this time, as it’s one of the stronger ideas and additions to Mario Golf in a long time. Matches can get tense and stand in contrast to the relatively tame standard courses found elsewhere in the game. Time will tell how it holds up and develops post-launch, but for now Battle Golf is my go-to party game.

Not to harken back to Mario Tennis Aces once again, but it would seem compared to that game Camelot took some steps to bolster the single player offerings here in Super Rush. Gold Adventure has you playing as a Mii, traveling from clubhouse to clubhouse on each of the playable courses and taking on both standard golf matches and more unique challenges. 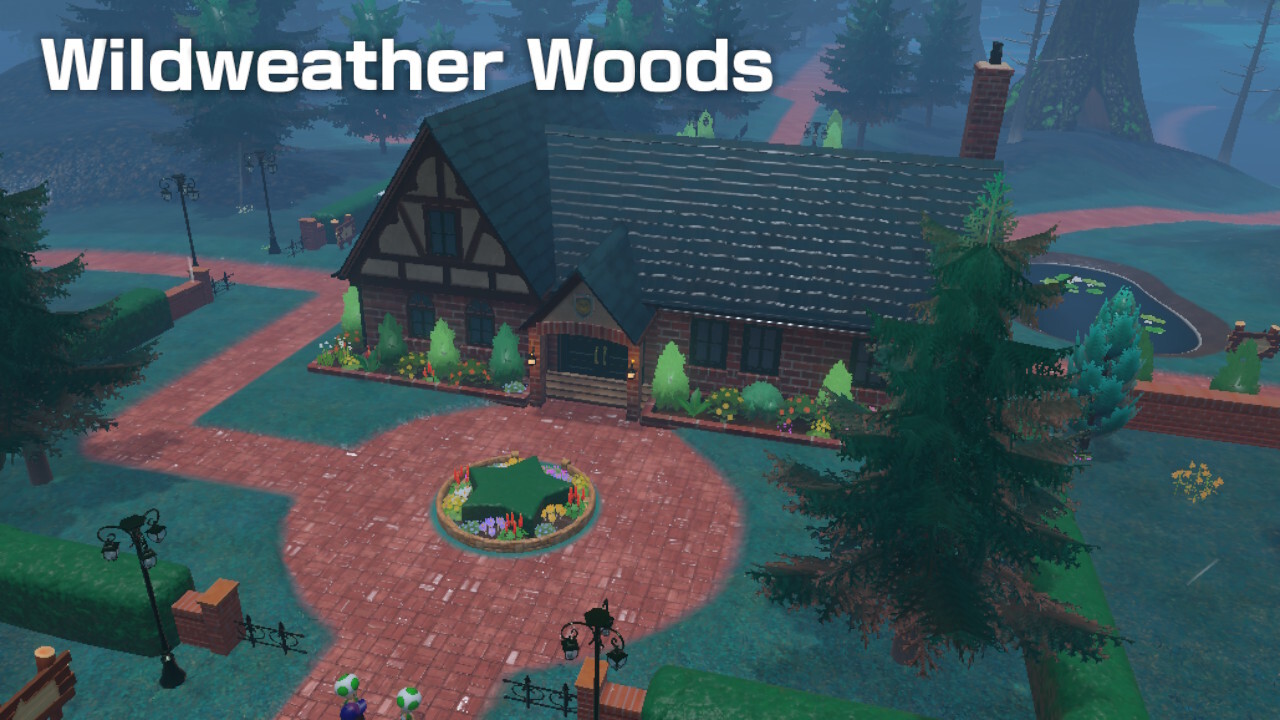 It doesn’t go full on RPG, but you’re able to level your Mii and tailor your stats to your liking. This gives you access to the best golfer possible eventually, with maxed control and power to make every shot count. There is some tradeoff of stats, but it’s easy to feel overpowered in this mode.

Part of that may come down to the opponents’ AI, though. I don’t expect the game to want to destroy me with difficulty, but I also didn’t want to be bored watching the CPU golfers take all their shots and take them poorly. One notable instance had poor Wario roaming the fairways in a fruitless attempt to find his ball, all in real time with no way to skip or speed up. No matter how sweet his fit is, it wasn’t fun to watch. 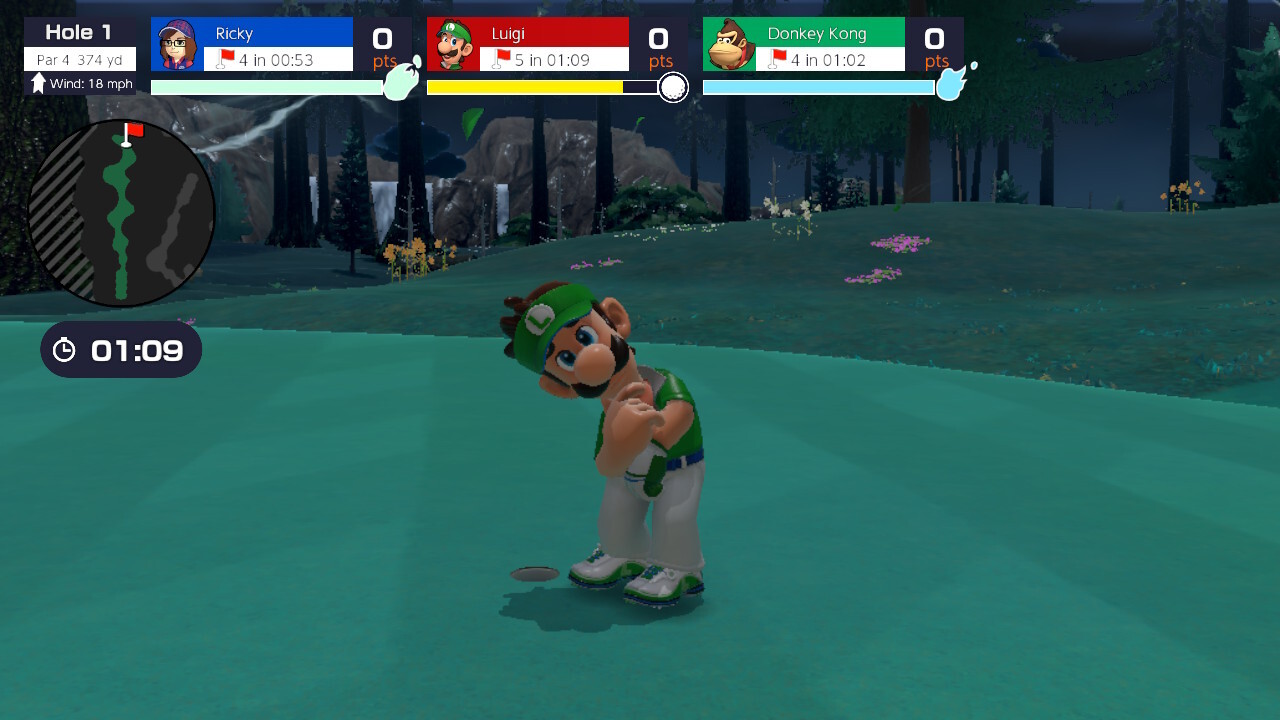 Most of these matches were Speed Golf, which is fine, however sometimes alternative mechanics or ideas worked their way in. The desert course had me managing my hydration to avoid passing out mid-challenge, for example. The added tweaks were okay from a theming perspective but never really changed my approach, which was to Super Dash from ball to ball. If only I could cancel those charges when I accidentally passed my ball, though…

I also have to single out a particular challenge from this mode called Cross Country Golf. It’s terrible. It only came up a few times in one section of the entire adventure, but that was more than enough. Rather than gently teach various golfing or game mechanics as the rest of the mode did, it decided to beat me over the head with a 5-iron that I should probably use my 5-iron. Imagine having to sink every hole on a course in any order within a set stroke limit, but also the course has varying elevations and uncooperative wind effects. That’s Cross Country Golf, and I hope it’s off the tour going forward.

Also also, the Adventure just sort of…ended? I won’t go into specifics, but once you reach the final course of the game and have a face off with a boss (yes, there are golf bosses) the credits roll rather abruptly. No Battle Golf match despite that being a big part of the opening cutscene and Golf Adventure’s start, no final tournament against the Mushroom Kingdom greats, not even a celebratory round with the friends you made along the way. Just… the end.

Outside of its conclusion, I had fun with the simple plot (with Toadette, Boo, and Chargin’ Chuck as your fellow rookies and Birdo as a supportive team mom) and quirky dialogue. Still, Golf Adventure felt a step back compared to Mario Golf: World Tour’s Castle Club. That had a lot more variety in customization options to it, giving me more incentive to seek out those pieces of gear, not to mention some other aspects inherent to that entry I’ll dive deeper into below. No amount of golf bosses or cloaked Koopa sages could make up for those missing ideas. 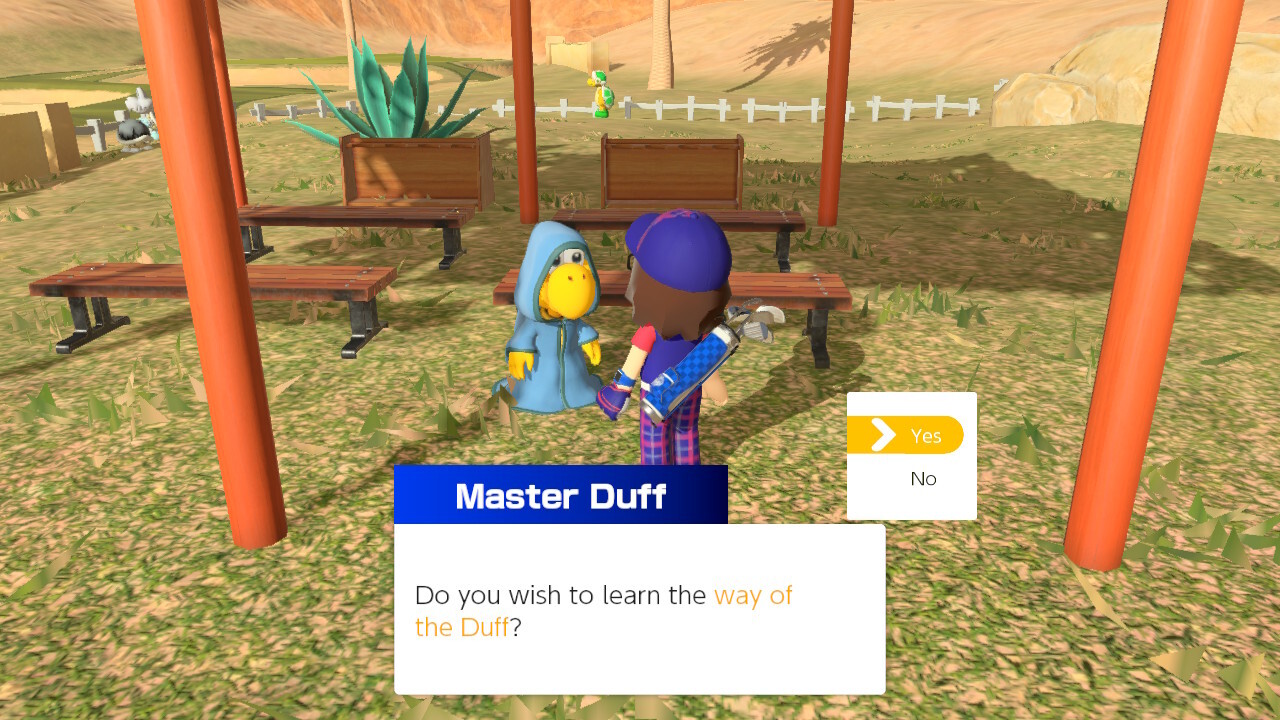 A few strokes over par

Make no mistake, Mario Golf: Super Rush is fun, the new outfits are incredible, and its courses are gorgeous. It just feels like a good portion of the series’ charm is stripped away, with there being a lack of personality in most areas. I loved World Tour on the 3DS even if it wasn’t as pretty or in depth with its gameplay because its courses dared to be different and ambitious by the series’ standard. There’s no golfing underwater here, or signs of Peach’s Castle in the background over pink fairways. There’s the occasional Piranha Plant, and Bowser’s themed course does start to work more elements in, but one look at Super Mario Odyssey shows so much visual potential here for locations.

Characters are also less expressive with their celebrations and disappointments, which no amount of panache can replace – not even Waluigi’s. The new golfers, particularly King Bob-omb and Pauline, do fit right in though and I’m looking forward to who else will make the cut in the coming months.

I have high hopes for post-launch content in this one, with a planned New Donk City course matching up more with what I’d like to see in Mario Golf. In the meantime, Super Rush still has polished gameplay and enough new modes to make for enjoyable multiplayer sessions both in person and online. It may be lacking in more fantastical ideas and presentation, and is still a slower paced game even with targeted improvements, but fans of the genre won’t be disappointed. Like any promising golfer, it has the makings of greatness and just needs to work on its personal bests to come up under par next time.