Ahh LEGO Star Wars, the OG of licensed LEGO games. When the original LEGO Star Wars dropped in 2005, its success ushered in an entire genre of licensed games that has had largely the same formula between plenty of the world’s most popular franchises. How fitting it is, then, that a major shakeup to the LEGO game formula starts with a return to its Star Wars roots. Gone are the hub worlds from previous LEGO Star Wars games, replaced by a large pseudo-open world covering several planets and the immediate spaces in the galaxy outside of them.

Each planet in The Skywalker Saga has fully explorable cities and other notable areas you can visit, each containing several side-quests and activities you can complete to unlock characters or items to buy power ups, and a section of space you can freely fly through to do battle with Empire ships or complete other space-related sidequests. Flying through space in a variety of ships spanning the entire Star Wars canon is definitely exciting, with racing quest, random dogfights, and more. It did take me a little while to get the hang of the controls when flying ships around and space combat is a skill that I had to hone over a few play sessions, but after a little less than a week with the game I’m far more comfortable in the cockpit than I was to begin with. 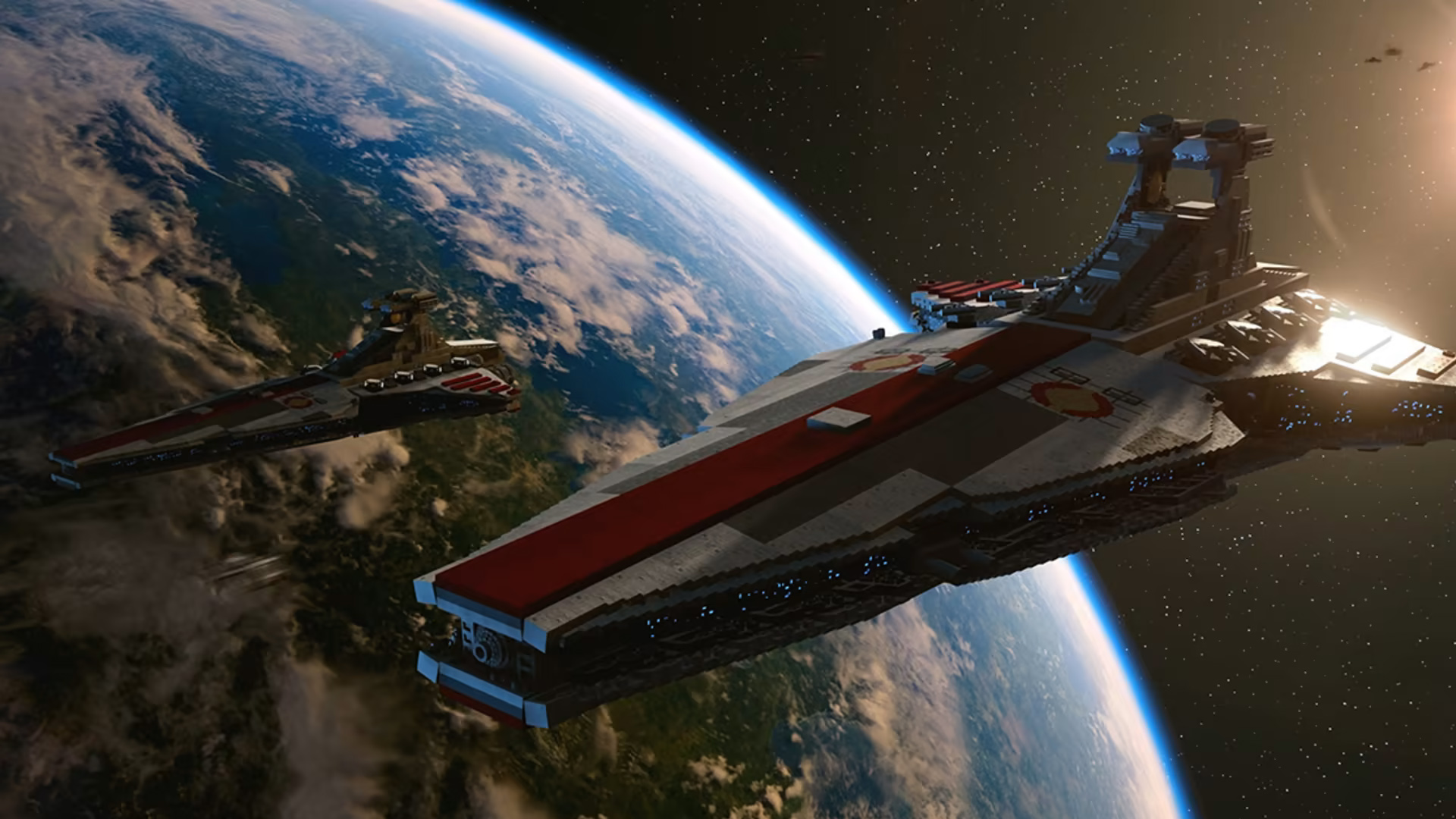 The change from a small hub to what is essentially an open galaxy isn’t the only shakeup here though. Each of the nine Star Wars episodes covered by the Skywalker Saga contains five all-new levels separate from the open world that will be more familiar to LEGO Star Wars fans, but the gameplay inside those levels looks and feels a little different from past entries in the franchise. Characters with blasters now will do combat in the third-person, holding ZL to aim and pressing ZR to shoot, like most modern third-person shooters. Characters who do more one-on-one combat are treated to a new combo system that multiplies the number of studs you receive after combat based on how long you can keep your combo going. There are, of course, more intricacies to the combat depending on the class of the character you are playing, like a Jedi using The Force to throw objects or enemies, or a personal favorite of mine, the Lightsaber throw. These changes to the basic LEGO game formula were hard to get used to at first, but after playing through a few episodes they feel really well done and I was glad to have things feeling a bit more modern. This modern approach helps the core gameplay loop avoid feeling tiring or repetitive, which is a worthwhile tradeoff to losing a bit of that old-school LEGO game charm.

Each of the nine episodes in The Skywalker Saga has been completely remade from the ground up with new levels and new cutscenes, so people who have played previous LEGO Star Wars games are still being treated to fresh new content. In addition, The Last Jedi and Rise of Skywalker are being adapted into LEGO form for the very first time in The Skywalker Saga alongside these reworks, helping the whole package feel much more cohesive. 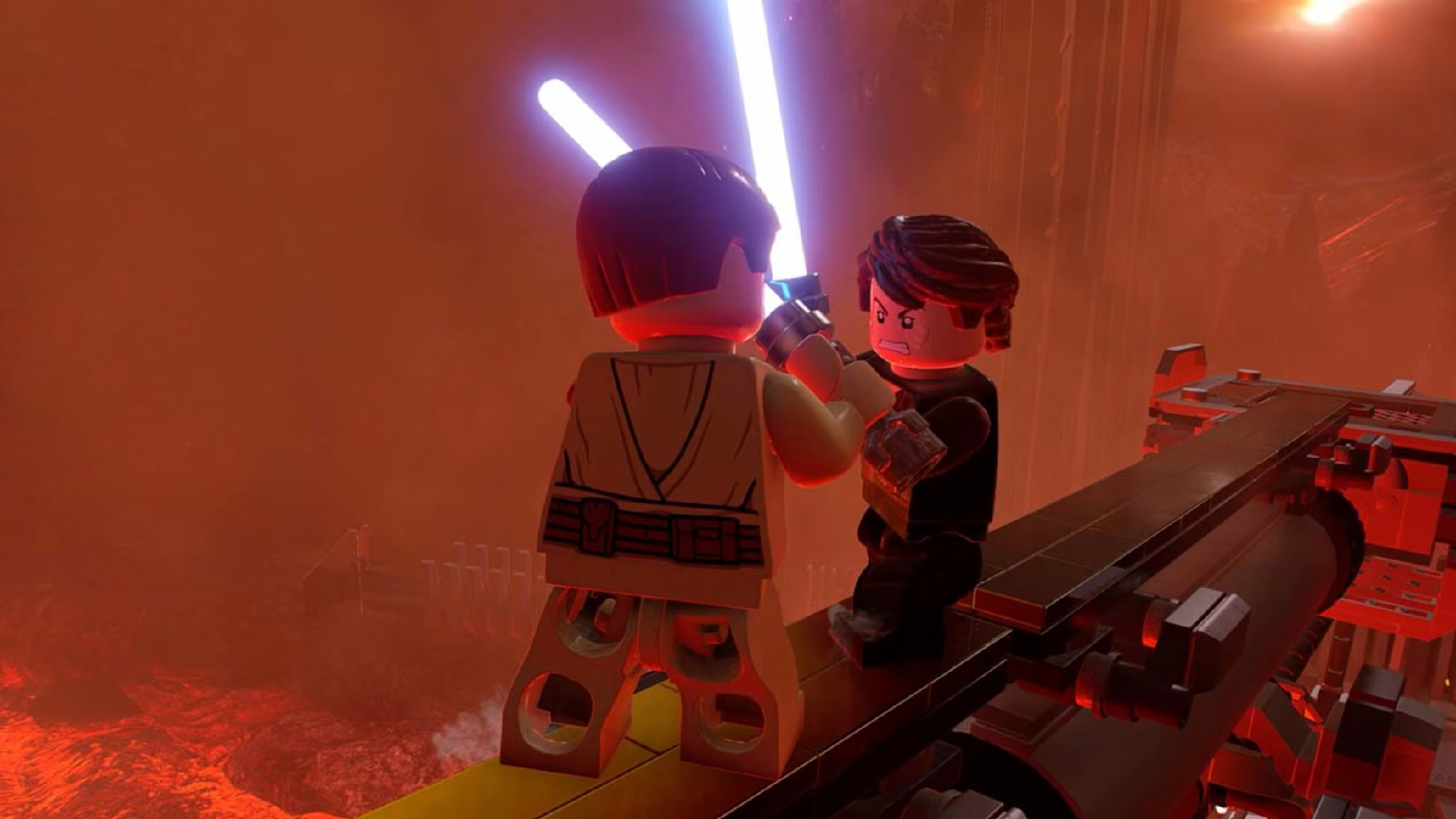 As with all recent LEGO games, Skywalker Saga does feature voice acting rather than mumbled dialogue, and to an extensive amount. By and large the voice acting is pretty stellar with very few lacking performances, which I feel is rare for a LEGO game. There is a “Mumble Mode” to turn all the voices into mumbling reminiscent of the early LEGO games, for those whose nostalgia leaves them wanting a more traditional LEGO Star Wars experience. Thanks to my own nostalgia I had actually planned on using Mumble Mode for the majority of my playthrough, but the voice acting ended up being a pleasant surprise and I haven’t felt the need to turn on Mumble Mode at all.

All the new cutscenes are relatively faithful to the movies, but thankfully a lot of that old LEGO charm has been brought back and the game is filled to the brim with sight gags and fun references, including meta-references to properties other than Star Wars. Hearing Qui-Gon Jinn unexpectedly reference his “very particular set of skills” got a hearty chuckle out of me, as did plenty of other moments in The Skywalker Saga.

As with most third-party Switch releases, diving into LEGO Star Wars on Nintendo’s console does come with a few compromises, though not as many as you might think. The game runs at a steady 30 frames per second in almost all areas, but the frame rate does struggle in almost every cutscene, most notably as the cutscenes start. I also encountered a weird texture issue after jumping between a few different episodes after playing for a longer period of time than usual, where a bunch of textures in Episode VII: The Force Awakens just didn’t load smoothly at all. The opening crawl was a blurry mess, and plenty of other textures peppering the First Order base and Jakku were nothing more than vague blobs on various surfaces. 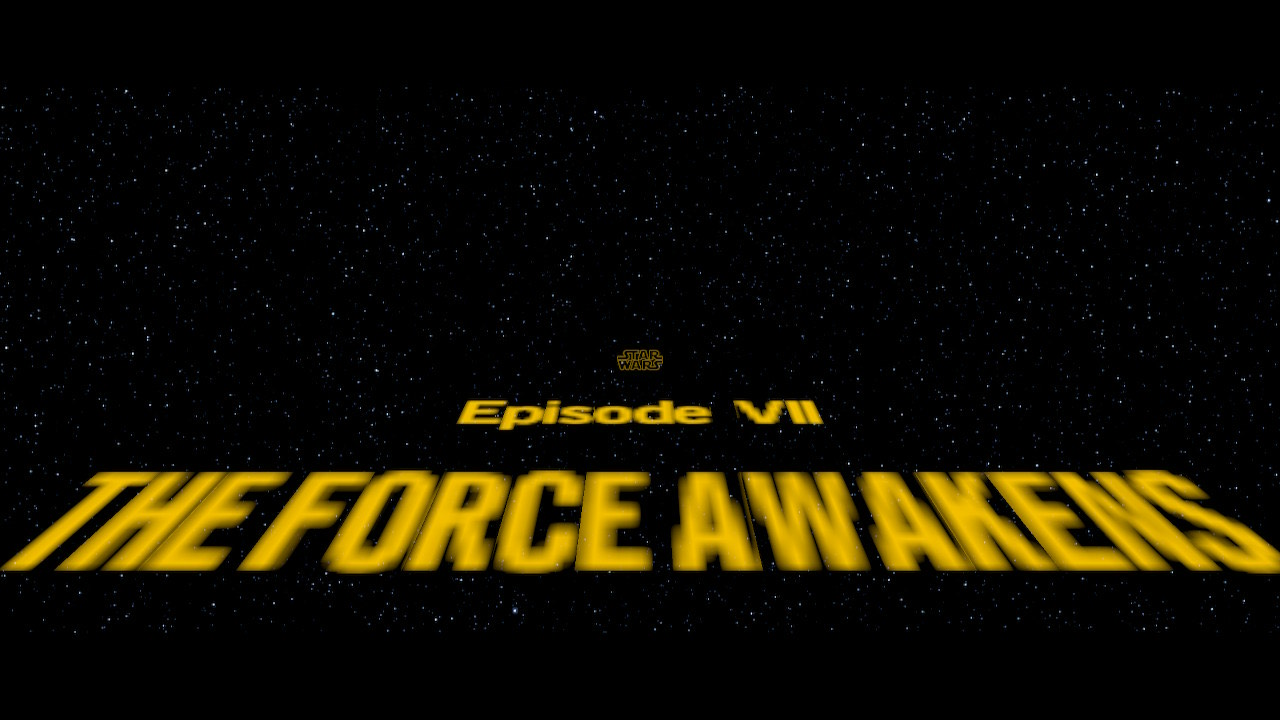 Quitting the game and booting it back up solved the issue immediately, however, and I haven’t seen it resurface in the days since. The only other issues I encountered were some instances of pop-in while exploring the open areas, both with complete objects and some textures, and I noticed that the icons for unlocked characters are weirdly blurry on the “level complete” menu. I’m not really someone who is bothered by technical stuff like this, and, for me, the tradeoff feels more than worth it when I get to play LEGO Star Wars on the go. However, if you are a gamer who cannot live with the occasional weird texture issue, and the thought of stuttering cutscenes and pop-in is absolutely unbearable, being tethered to your monitor on another console or your PC might be your best bet.

The Force is Strong With This One

At first glance, LEGO Star Wars: The Skywalker Saga might seem like just another LEGO release treading the same ground already covered by other entries in the series, but as soon as you start to play it’s immediately apparent that this game is a huge upgrade to the LEGO formula. When all is said and done, The Skywalker Saga is a delight to play either at home or on the go on Nintendo Switch, provided you can look past a few minor technical compromises. 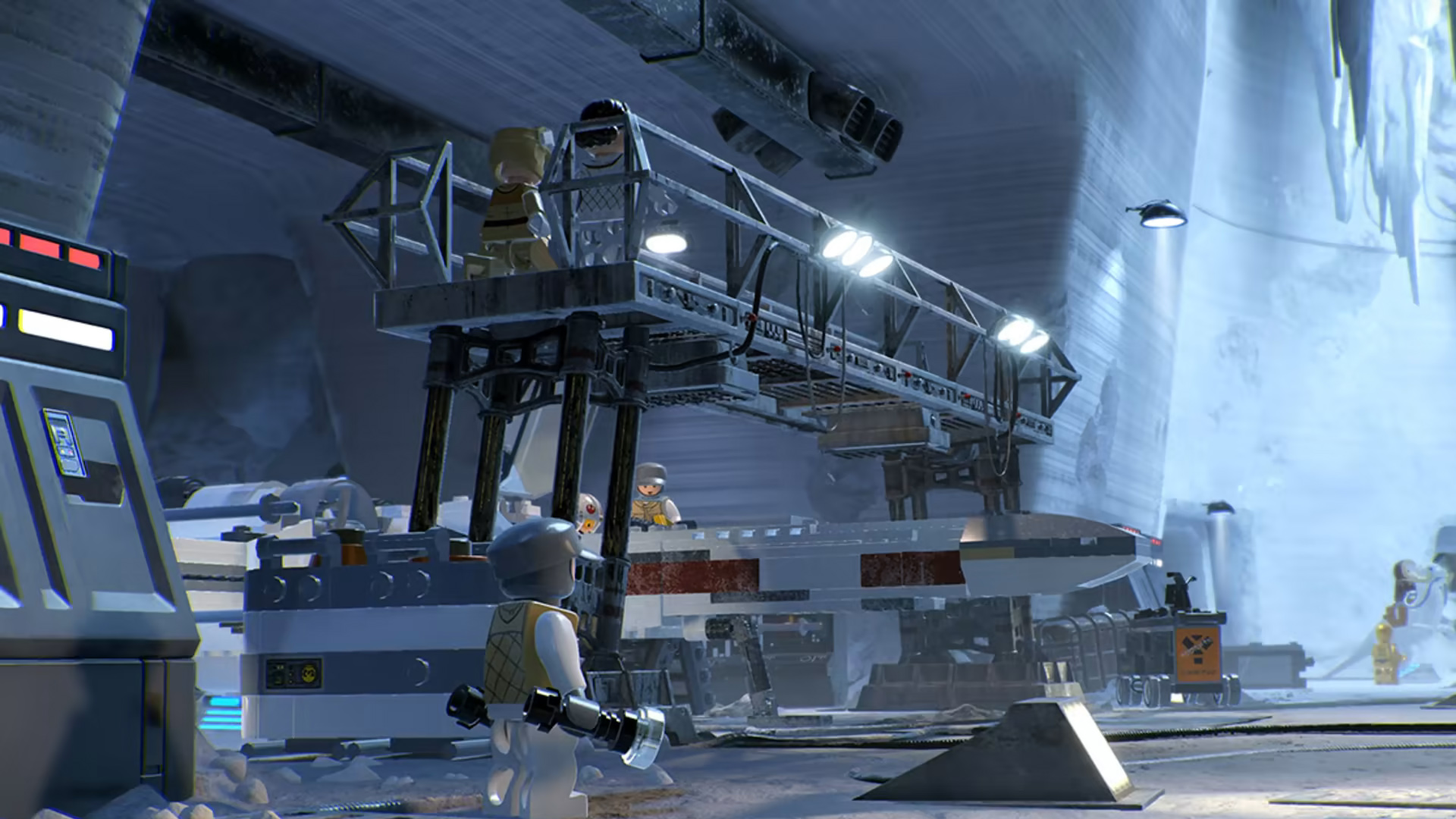 This new entry sets the bar pretty high for future LEGO releases, bringing a lot to the table with over 300 characters and plenty of ships to speed around the galaxy in, not to mention the rich and surprisingly funny experience that awaits you thanks to all new levels and cutscenes spanning the nine main films in the franchise. Whether it’s on Switch or another platform, I can safely say that fans of LEGO Star Wars won’t want to miss out on this one. 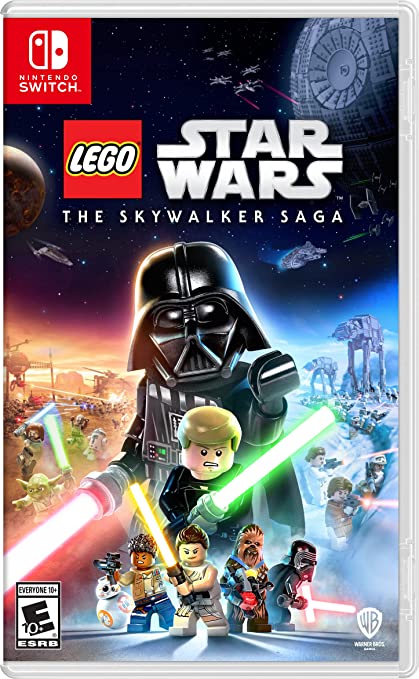