Legend of Mana was not a game I’d ever really heard a word about. I knew of it – the series had to continue somewhere after the SNES era – but people didn’t speak of it like they spoke of its predecessors. Secret of Mana was the 16-bit era action RPG. Trials of Mana (known back in the day by its unlocalized title of Seiken Densetsu 3) was a high-profile example of a game that never made it to Western shores (at the time), and had the aura and distinction of a cult favorite as a result. Even the franchise’s first entry, Final Fantasy Adventure, was something I was at least marginally familiar with because it came up in conversation (although, full disclaimer, I’ve never played it nor any of its remakes).

And so, I assumed for many years that Legend of Mana was simply not worthy of attention. Not bad enough to be noted, but not exceptional or interesting like its forebearers. When I was offered the chance to review it, I took the opportunity largely due to sheer curiosity. What was this little PS1 game that nobody had ever told me about? And in the process of playing it, I found out. 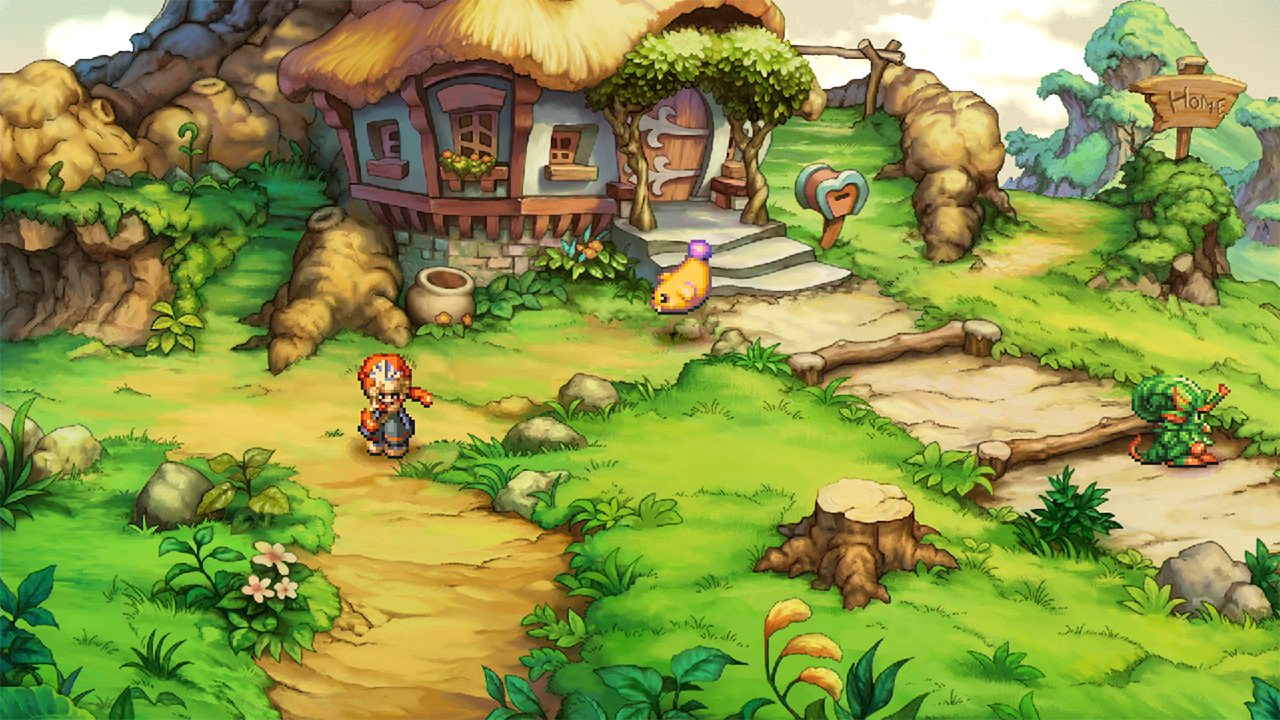 Legend of Mana isn’t just as good as the previous Mana games. It’s better. In fact, it’s not just one of the best JRPGs from the Playstation era, it’s one of the best I’ve ever played. And nobody told me, so I’m here to tell you.

At a glance, Legend of Mana appears incomplete or just plain weird. It doesn’t really have a plot, at least one at its core – just the vague premise of seeking out the Mana Tree, which you saw in a dream. You play as a player-character of whatever name and gender you choose, and then choose a small spot on a large atlas to comprise your save file’s world. From there, you make up the world map yourself out of various artifacts you find in your travels, and eventually happen upon the circumstances that lead you to the Mana Tree.

It sounds thin. But Legend of Mana isn’t about a core narrative for one chosen hero that supersedes all others – it’s about the world, literally shaped by your hands and full of curiosities just waiting to be discovered. I read old reviews of the game from 1999 that complained about the lack of a main story. At the risk of sounding blunt and reductive, all those reviews are dumb and wrong. The game recognizes that a thin veneer of a main plotline would just be distracting, instead inviting you to several disconnected narrative threads and one-off events, discovering the peculiar inhabitants of the world and experiencing their lives. With the addition of strong writing that can be just as whimsical as it is poignant, and the whole experience feels like a storybook full of fairy tales, wonder and intrigue waiting in both the mundane and the magnificent. It’s unconventional, but it feels so much more immersive than a hundred other RPGs with the usual “save the world” drivel. And even with that very basic framing, the game manages to thematically tie it all together at the end in a scant few beautiful lines. It’s soulful. 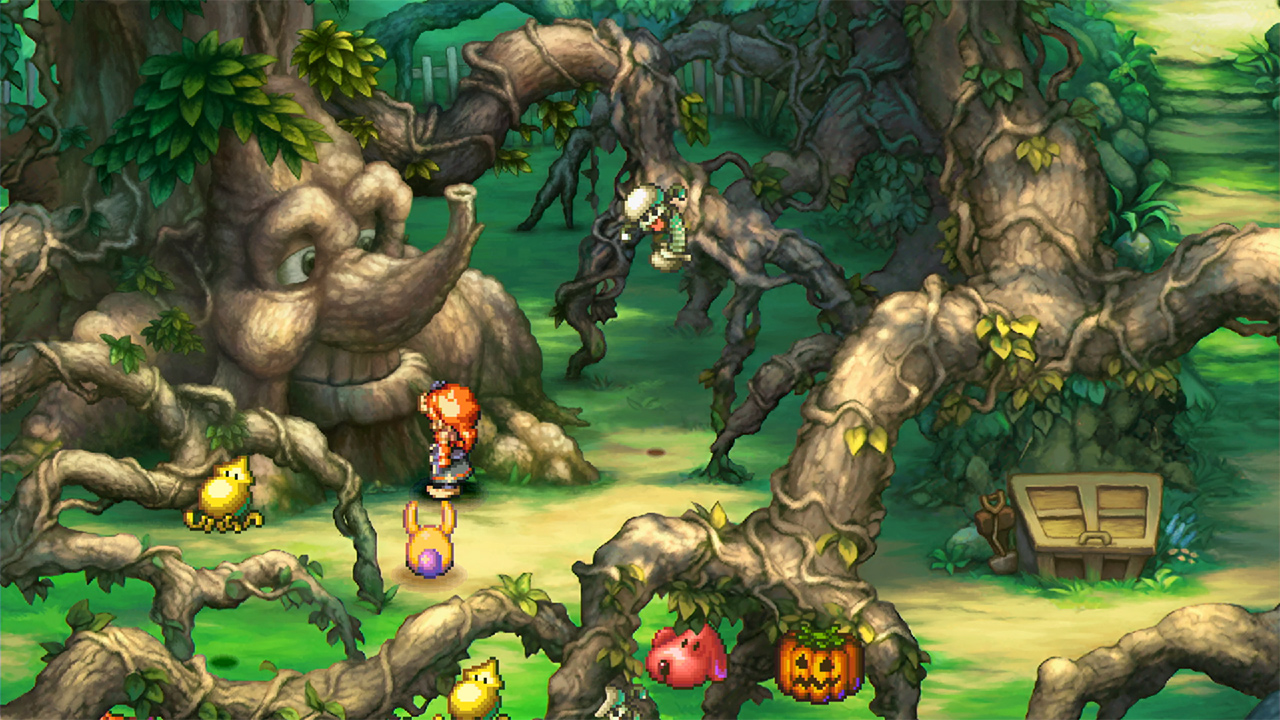 Of course, much of the world’s beauty and allure can be attributed to its top-notch aesthetic, which matches the aforementioned fairy tale vibe well. It makes sense why this game is a remaster as opposed to a full remake like Trials of Mana – the visuals are so strong that over twenty years later only a slight tuneup is needed. No character design is conventional or uninteresting, and the colors pop and hum in every single environment. While the juxtaposition of clean backgrounds with pixelated sprites can occasionally be funky-looking (mostly when there are fancy background effects going on in boss fights or with certain NPCs), the two mesh together surprisingly well most of the time. And as a nice bonus, you can view the game’s brief gallery of concept art at any time.

As for the music… what do you want me to say? The composer is Yoko Shimomura. Yoko. Shimomura. YOKO. SHIMOMURA. REARRANGING HER OWN TRACKS FROM TWO DECADES AGO. To call it masterful is selling it short – so many tracks are immediately memorable to me and already provoke nostalgia from a game I started playing less than a month ago. And as icing on the cake, you can switch between the original and arranged versions anytime. What else can be said?

With all that said, Legend of Mana is an action game at its core, and in that role it’s… surprisingly enjoyable. I thought it might have aged poorly like some of the other early Mana titles have, and while a tad clunky it feels more deliberate than obtuse. Combat consists of simple combos and special moves with one of eleven(!) types of weapons, each with their own rhythms and strategies, along with instruments for casting magic. While not super fast or fluid, there is a flow to battle and certainly a sense of growing power as you learn more skills. I primarily focused on Spear, Fist, and Flail (Nunchuck) development, and by the end of the game I was metaphorically and literally hurling meteors at people. It’s GREAT fun.

But there is a catch there. The “learning skills” part. It’s not hard to do, per se… if you know what you’re doing. And knowing what you’re doing is the rub of Legend of Mana in general. It’s the sort of game where you really should have a guide open from the onset, both for the sake of learning your various abilities as well as seeking out the various story events and just… understanding how certain systems work in general. Even WITH a guide some stuff is simply too oblique to fully grasp. There were a couple events I just couldn’t seem to trigger no matter how many times I tried. Why? No idea. There were others I failed with little prior warning – and when you fail events in the game, you don’t get a do-over. This, combined with crafting systems that are a headache to master, is the game’s one flaw. 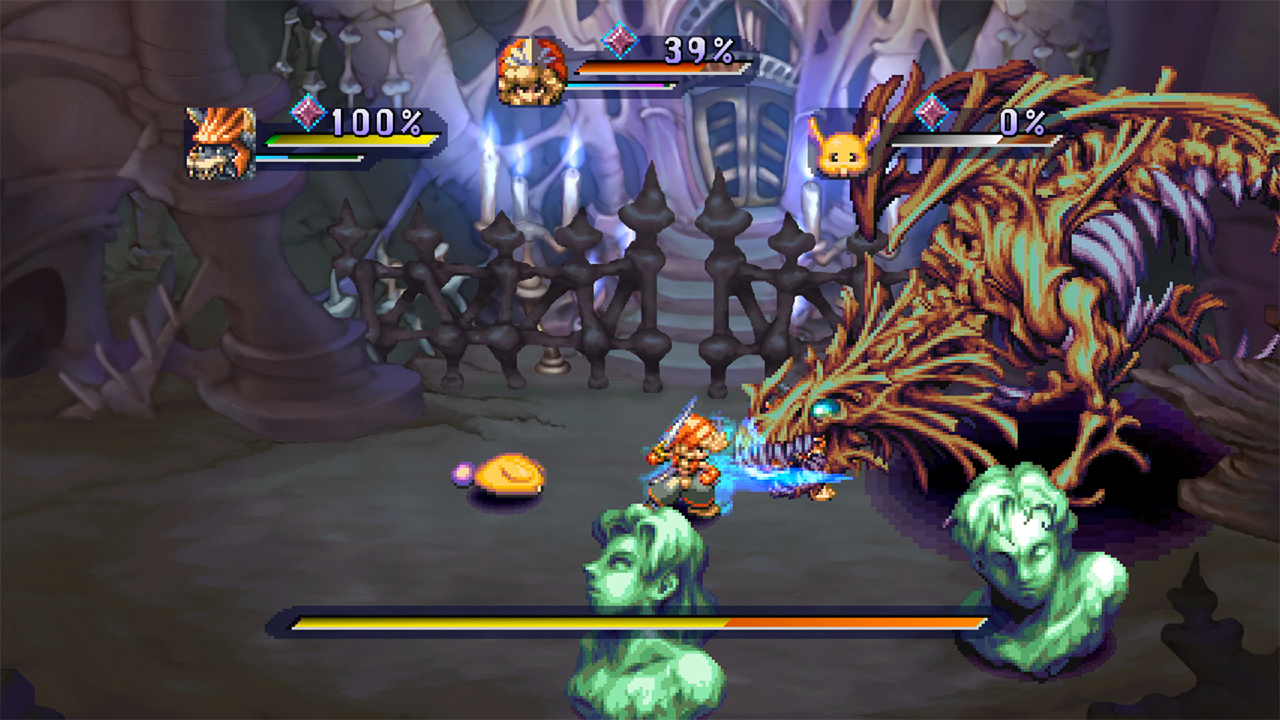 Now, it’s 2021. Finding a guide for the game is a cinch, and in my opinion, being the sort of game that requires a guide isn’t necessarily a detriment – I started off blind for an hour or two and was still having fun, for the record – but 100%ing it in any capacity is more trouble than its worth. I was only trying to get every event, and I ran into unexpected failure 75% of the way through the game that thwarted that effort, with no recent save to bail me out. It’s not a game that can be easily wrangled or picked apart. Some of its mechanics and intricacies even now feel like mysteries. But perhaps that’s part of its charm. Legend of Mana might be best when you’re not trying to understand every last detail, when you examine it less as a series of interlocking parts and more an organic, capricious thing with some new oddity at every turn. I didn’t fully understand how the monster raising, golem building, or weapon enchanting systems worked – but I still enjoyed what I got out of them.

This game’s entire vibe can be summed up in one of its most iconic characters, Lil Cactus – a potted plant-guy hanging out in your bedroom from the moment you awaken. If you return home after every single event in the game and talk to him, Lil Cactus will write something about the event that just occurred, recording his thoughts (however tangential they may be). On paper, it sounds tedious to return home after EVERY story you experience simply to talk to a cactus and watch an animation… but over time, it feels routine, almost homey. To go home, put up your feet, and record what happened in an unconventionally strange way, offering just a little breather to reflect before carrying on… I feel relaxed just typing it out.

If that doesn’t sound appealing, then this isn’t the game for you. It’s not one that plays it safe or conventional, but that’s why, despite releasing over twenty years ago originally, this remaster felt like one of the freshest JRPGs I’d played in years. It’s strange, funny, and at times, heartrending – truly, a legend if there ever was one. 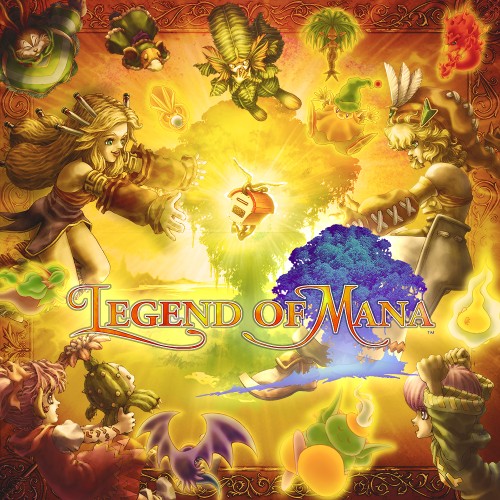