I love everything about the ocean; I love the fish, the tropical summertime vibes, the sound of the waves – everything! When I saw King of Seas, I immediately knew I needed to play it. I intentionally held off on playing the demo that’s available on the eShop because I wanted to wait and have my first experience of the game be the full experience. If it really clicked with me, I didn’t want to have to stop playing after the demo ended. The game had already won me over by passing all the tropical vibe-checks in its trailers and pre-release gameplay, so I was pretty excited to see if the gameplay could do the same.

King of Seas is set within the watery dominion of The Kingdom of the Seven Seas, a seemingly peaceful empire ruled by a benevolent descendancy of kings dating back 800 years. From the outset, the game has a very Pirates of the Caribbean vibe, and I’m talking about the classic Disney ride more than the movies about Jack Sparrow. There’s a particular charm that the ride has always had over the films in my opinion, and from a design, writing, and aesthetic perspective, King of Seas does a great job of coming close to capturing that charm.

Players choose between playing as the daughter or son of the current ruler as they set sail on their first-ever voyage as a captain. During this rite of passage which is nothing more than a simple delivery run to a nearby archipelago, the kingdom is struck by tragedy, with the king having been found dead on his throne. Upon the heir’s return, they are charged with the treacherous crime, and their ship is sunk by the captain of the Royal Navy. Disoriented and near death, the heir is picked up by a passing pirate vessel, and must join forces with the enemy of the crown to uncover the mystery of their father’s death and clear their name.

King of Seas features a top-down gameplay perspective that gives a birds-eye view of the tropical, pirate-filled waters. Tiny ships, islands, and structures appear almost as a diorama of sorts, with various natural and man-made landmarks jutting out from the depths. This will come as a surprise to absolutely no one who has read the first few sentences of this review, but I found the game’s visuals to be quite beautiful. The sandy beaches and rustic island villages are a pleasure to look at, and I never got tired of seeing flocks of tiny seagulls swarming around the larger navy ships. 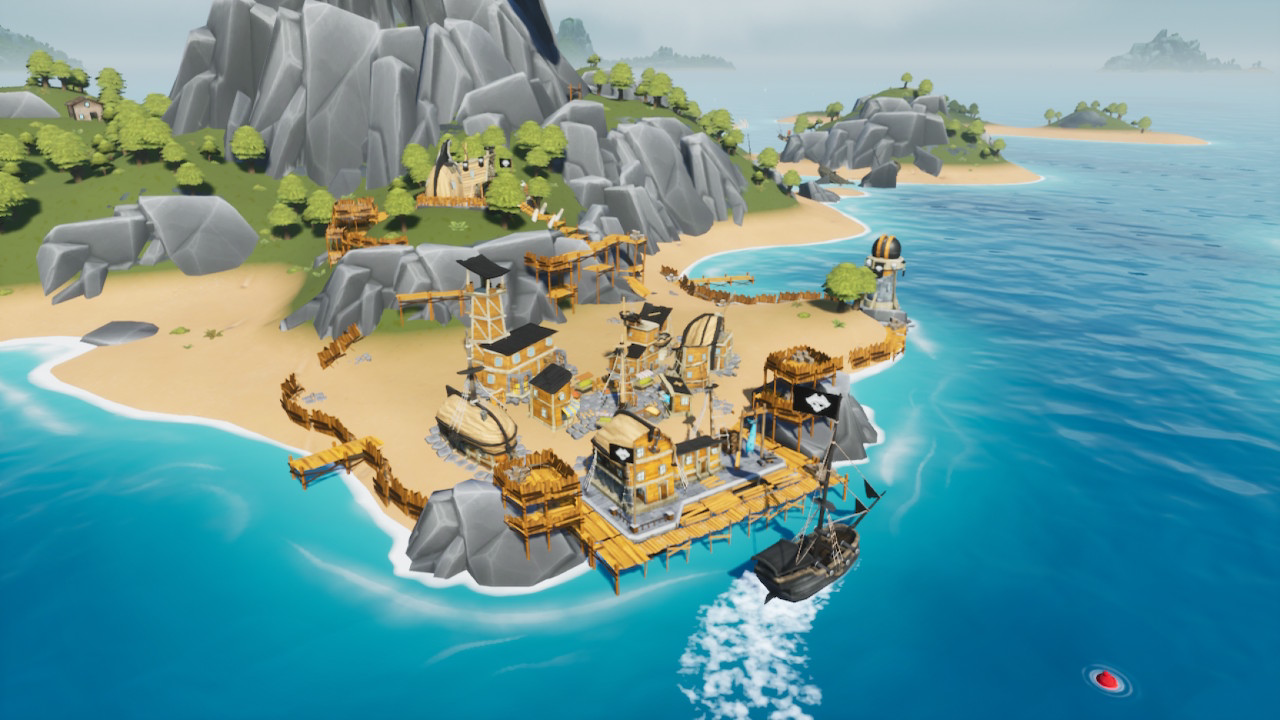 The story of this buccaneering adventure is told mostly via hand-drawn character portraits that are incredibly well done and creative, and set a nice storybook tone for the whole game. This whimsical choice for the character models is matched by lighthearted, almost silly dialogue that tells an epic tale of plunder, pillaging, and trade that knows just when to poke fun at itself. Accompanying the gorgeous tropical environments and beautifully drawn character portraits is a soundtrack that’s about as pirate-y and adventurous as any aspiring sailor could ask for.

Unfortunately, there are a few technical and design hiccups that could put a few leaks in your poop deck, and make an otherwise fantastic experience a bit bland and even difficult to play at times. There’s a strange hitching that can occur when approaching islands or while sailing the open sea. It’s clear that the game is trying to load the areas you’re approaching in the background, and not having pop-in is appreciated, but it’s hard to truly enjoy the flow of sailing when at any moment the game can literally stop for a second, ripping you from the otherwise zen-like feeling of coasting the high seas.

From a user interface perspective, the menus and meters are quite well done, with a wooden board aesthetic that helps bring you back into the world after the stuttering has pulled you out. The most important details such as health bars, stat and inventory menus, and dialogue text are easy to read and navigate both in handheld or TV mode. It’s odd, then, that the names above ships can be almost impossible to read regardless of which mode the game is running in. Multiple times I found myself loaded up on loot and attempting to avoid further confrontation so I could safely make port, but unable to distinguish whether the ship I was approaching was a harmless trader or an aggressive naval ship. This tiny text left me with two options: Either take a screenshot, open the Switch’s album and zoom in, or get up and walk close to the TV, neither of which is ideal and simply lead to me fearfully avoiding all vessels whenever my hold was full or my health was low.

While the text is easy to read throughout the main and side quests’ dialogue boxes, the quest-givers themselves are often just re-colors of other characters. This makes sense for the amount of endlessly repeatable trade and quest loops that are possible throughout the game, but it once again breaks the immersion at best, and makes the game feel a bit undercooked at worst. The most egregious offenders are the reused main cast NPCs, which ended up leading to confusion on more than one occasion when I visited a tavern to find an adversarial NPC in a different colored coat suddenly asking me to take some resources to a neighboring island for them.

Mechanically, the gameplay hits a nice balance of simulation and arcade-style sailing, combat, and trade. The sailing itself is satisfying and intuitive, while offering light simulation elements such as your ship’s hull integrity, sail condition, and crew numbers all affecting your ability to sail or fight. It’s extremely satisfying to pull off maneuvers like hard turns in the midst of combat, allowing you to evade your opponents or put yourself in the right position for a devastating broadside attack. Outside of active combat, your ship can be customized with a plethora of different sails, hulls, cannons, and more to increase your effectiveness in combat or the efficiency of your ship’s voodoo abilities — the game’s take on magical buffs and attacks.

The biggest pitfall of sailing in games is often the very act of sailing itself. Even the finest-tuned sailing mechanics can’t escape the fact that, outside of navigating storms or skirmishes with other vessels, sailing can easily become outright boring. Thankfully, the exploration tied to the sailing has been handled quite well, with a number of activities that keep things interesting such as fish to catch, coastlines to pillage, treasures to find, shipwrecks to plunder, and of course, innocent trade ships to prey upon. It’s evident that sailing was given the most love during development, and it was absolutely the right call. There’s a relaxing and almost soothing feeling to sailing in King of Seas that makes the game an excellent pick for unwinding after a long day of work or school. 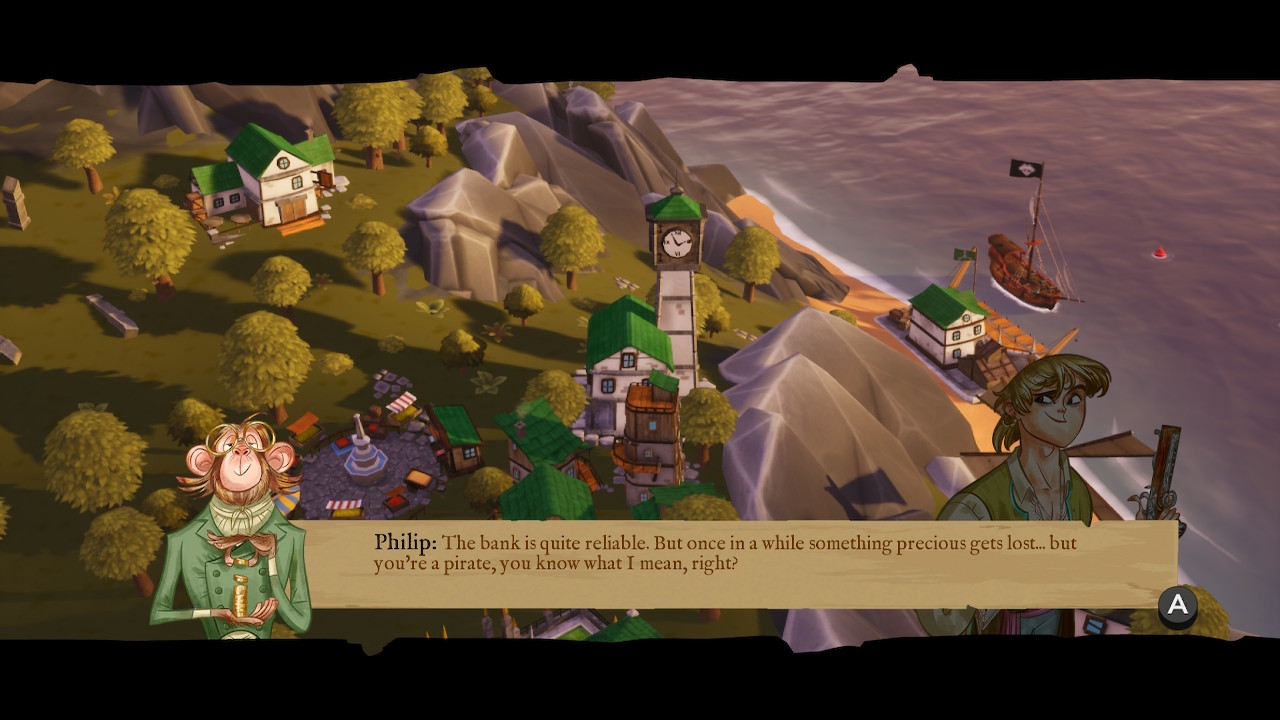 Once your hold is full of loot, the game’s mercantile and trade systems are ready and waiting to help you turn that pillaging into profit. Each island and archipelago has different economies of goods and side-quests available that’ll have you sailing from island to island in search of a way to offload your goods while avoiding profit loss. After all, gold is the real star in any pirate tale, right?

With such an emphasis on trading between islands, it seems like a bit of an oversight that there’s no way to mark your map outside of purchasing map pieces from local cartographers. In a game that’s all about adventure, exploration, and trade, it’s strange that you can’t mark which islands are bountiful with some resources and in desperate need of others.

Ya got the makings of greatness in ya

When all is said and done, King of Seas’ core gameplay loop of pillaging, questing, and trading, is pretty satisfying, and getting lost doing little side quests and looting shipwrecks is very easy to do. It’s a bummer, then, that that very same loop can get painfully repetitive with the umpteenth recolored character giving you the same quest with the same dialogue for the millionth time. At one point, I received the same request from two different islands that were only a minute or two apart, followed by two identical quests at the exact same outpost in the next play session. At least the developers as 3D Clouds were aware of this, and had a bit of a laugh by making some quest givers reference how budget constraints lessened their quest’s details, and other characters taking notice of the fact that they look so much alike their recolored counterparts on different islands.

King of Seas has some serious shortcomings when it comes to repetitiveness and performance, and there’s no way around that. Yet, for some reason, I kept coming back for more every single day, and not just because I had to for this review. I couldn’t stop thinking about it when I wasn’t playing, and when my day got tough, I found myself longing for its picturesque seas. I wanted to see more, explore more, and find out just what became of my character’s father. I often caught myself reaching for my Switch for just one more quick resource run or a brief sailing session when I had some downtime. 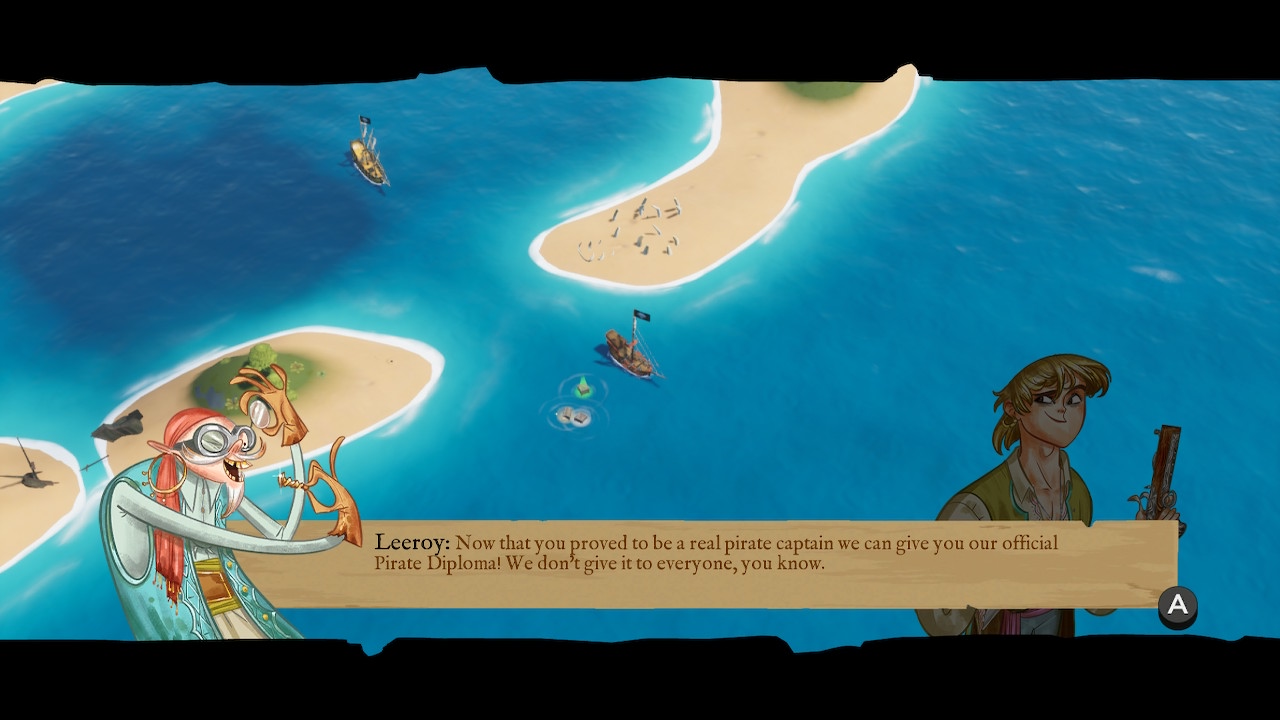 In spite of its faults, this nautical adventure is a fantastic entry-level trading sim that’s light on simulation and heavy on charm that’s best played in short bursts. As such, those searching for a more in-depth trading and sailing experience may be a bit disappointed by its more simple approach. However, that simplicity is one of the things that has kept me coming back to the game long after I’ve concluded my thoughts on this review. With so many games desperately trying to get their hooks into me with a myriad of systems, and even almost make me feel bad for not playing, it’s nice to play a game that says: “Hey Captain, we gotta figure out who murdered the king and clear your name, but if you just want to sail around catchin’ fish and selling pelican eggs, that’s cool too.”

While I can’t overlook all of its faults, King of Seas ultimately won me over with its storybook charm, interesting world, excellent sailing, and the simplicity of its simulation elements. In the current era of games with systems on top of systems that can make learning a new game feel like learning a second language, a simpler, more open ended experience such as this is like a fresh sea breeze. 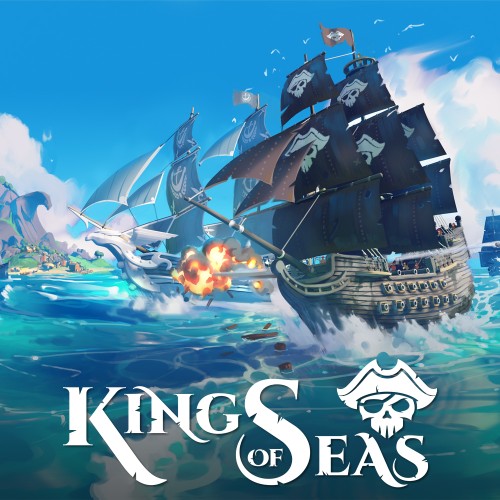