If I could go back and tell my high school aged self that I’d be reviewing a JoJo’s Bizarre Adventure game, and one released on every modern platform no less, I’d promptly declare that the taste of a liar. At the time this series (iconic in its home country) was an obscurity in the west most known for a handful of stick-figure animations and an old Capcom fighter. Now ads for its presently six part animated adaptation are being shown in Times Square, the memes have multiplied a hundred-fold, and here I am telling you about a much more modern fighter.

JoJo’s Bizarre Adventure: All Star Battle R isn’t a ‘new’ game, though. Rather it’s a touched up take on a PS3-era title. I imported the original back in the day and poured plenty of time into it, and am happy to report that everything that was appealing back then is more or less still here. That doesn’t make this a great fighting game that’s going to take the competitive scene by storm a la Street Fighter, Tekken, or Guilty Gear. Rather, this is a living love letter to the manga that captures the identity of Hirohiko Araki’s work exceptionally well. There’s plenty to enjoy here for fans, and even some additions and changes for anyone that might’ve given it a try before.

At its resonating heart, ASB is a hybrid 2D-3D fighter similar to some of CyberConnect2’s previous licensed anime titles, but perhaps leaning more on the 2D end. Though they’ll be in a 3D arena, fighters will be “locked” to a 2D plane with each other. There’s no free running, but instead you can dodge around your opponent, ideally taking advantage of the open space and taking a new angle of approach. It does take some getting used to, but it allows for some unique ideas and more JoJo appropriate elements, like gimmicky obstacles (such as a rain of poison frogs) and dedicated mechanics for both posing stylishly and declarative taunting. 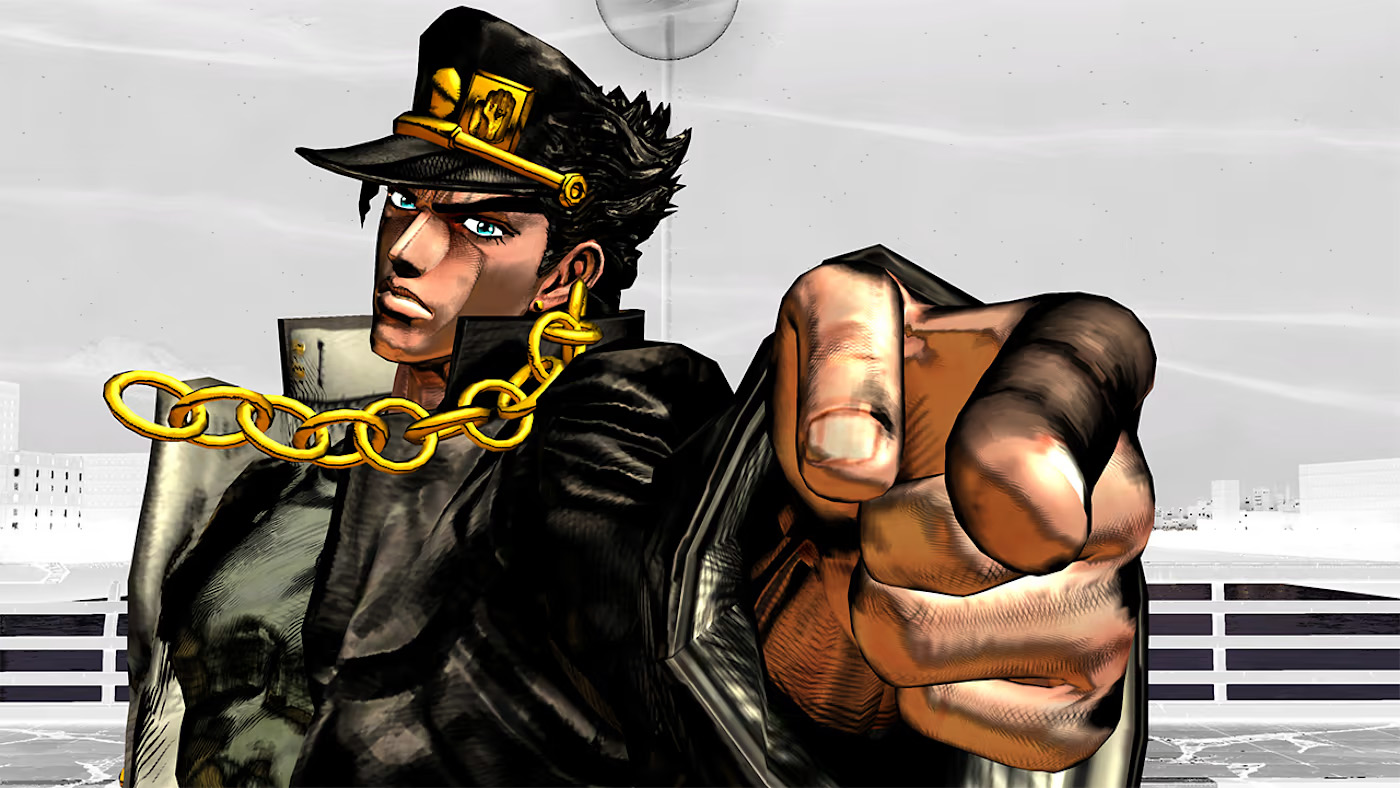 Each character will have a dedicated style that somewhat dictates how they’ll play. The most prevalent of these are Stand based characters, putting the series’ trademark representations of fighting spirit into play. With them, characters will have access to additional or alternative special moves, as well as the ability to have their Stand perform an attack while the Stand User acts independently at the same time. It bears mentioning that even though the umbrella designation for these characters is “Stand”, how that’s reflected is incredibly varied and gives each of the 50+ characters their own identity on top of other, unique mechanics.

Other styles include Hamon, which allows characters to charge up their meter freely and use it to power up specials; Modes, which provide characters control over certain forces and their bodies; Vampirism, granting enhanced capabilities and recovering health; and Mounted, which gives a few characters access to horseback movesets. These styles aren’t mutually exclusive either, as you’ll encounter characters that are both Vampiric and Mode wielders, or Mounted Stand users. 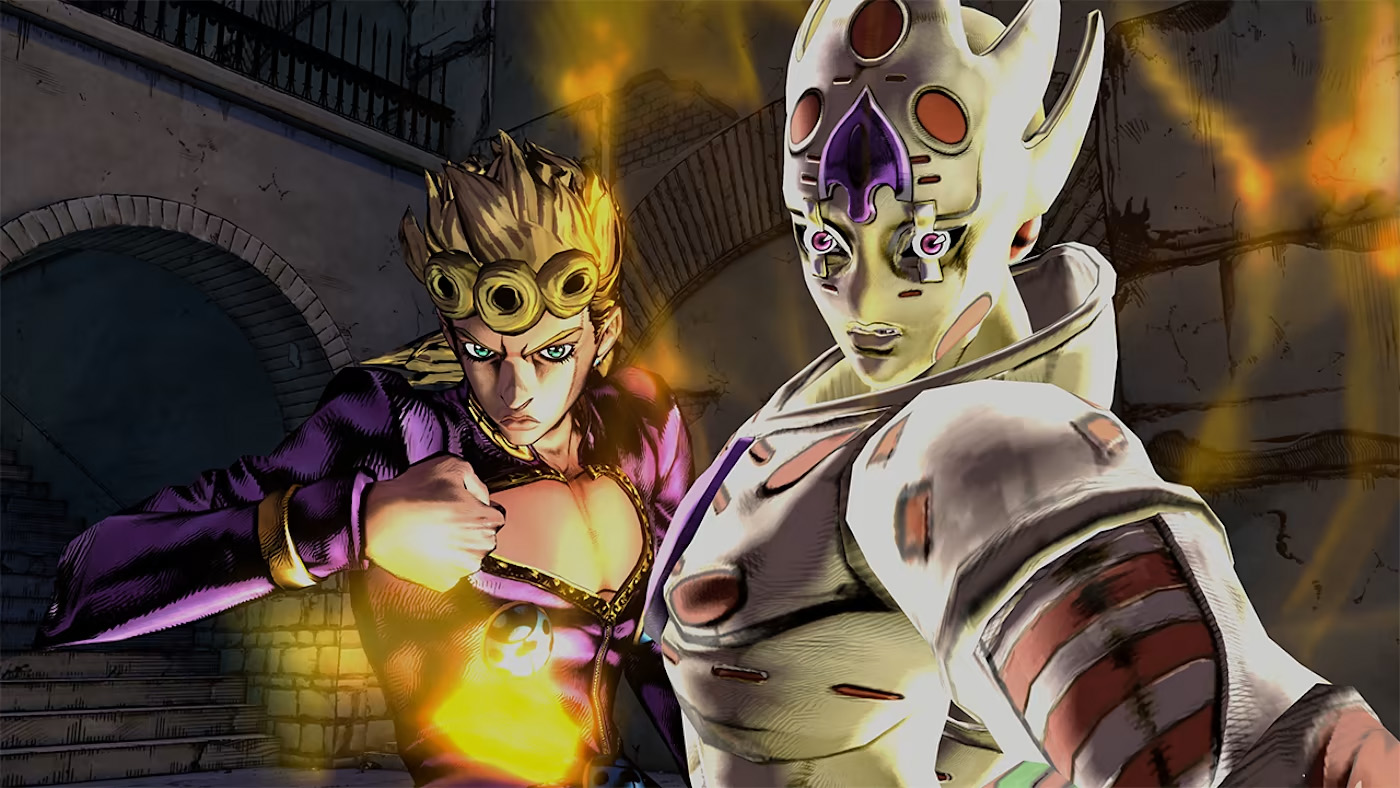 All of these ideas coalesce into not only a diverse array of characters, but perhaps the most reverently referential game ever made. Nearly every animation, every pose, every quote, everything in this game is pulled from the past 35 years of JoJo. This extends to the menus even, where confirming is Kujo Jotaro’s “YES, YES, YES” and rejecting is Kishibe Rohan’s “But I refuse”, localized here as “Like hell I will”. That distinction is worth noting in this department, as there are some translated lines that might clash with quotes that fans have taken as gospel for years. That said, what’s here is still reverent to the source, even when it comes to the many alternative and copyright dodging character names. Filthy acts at a reasonable price indeed…

For this “R”enewal of All Star Battle, the main selling point would be the new characters joining the roster. At launch we have F.F., Diego Brando, Trish Una, Ghiaccio, Prosciutto & Pesci, Mariah, Pet Shop, Yamagishi Yukako, Jotaro as he appeared in Part 4, and one Robert E. O. Speedwagon taking their places with the JoJo greats. The same care and attention that went into the rest of the cast can be found with them, with their personal traits offering some interesting gameplay. Thanks to this updated release players can finally have a jockey/dinosaur fight a sentient colony of plankton with a gun hand, and I think that’s pretty neat. 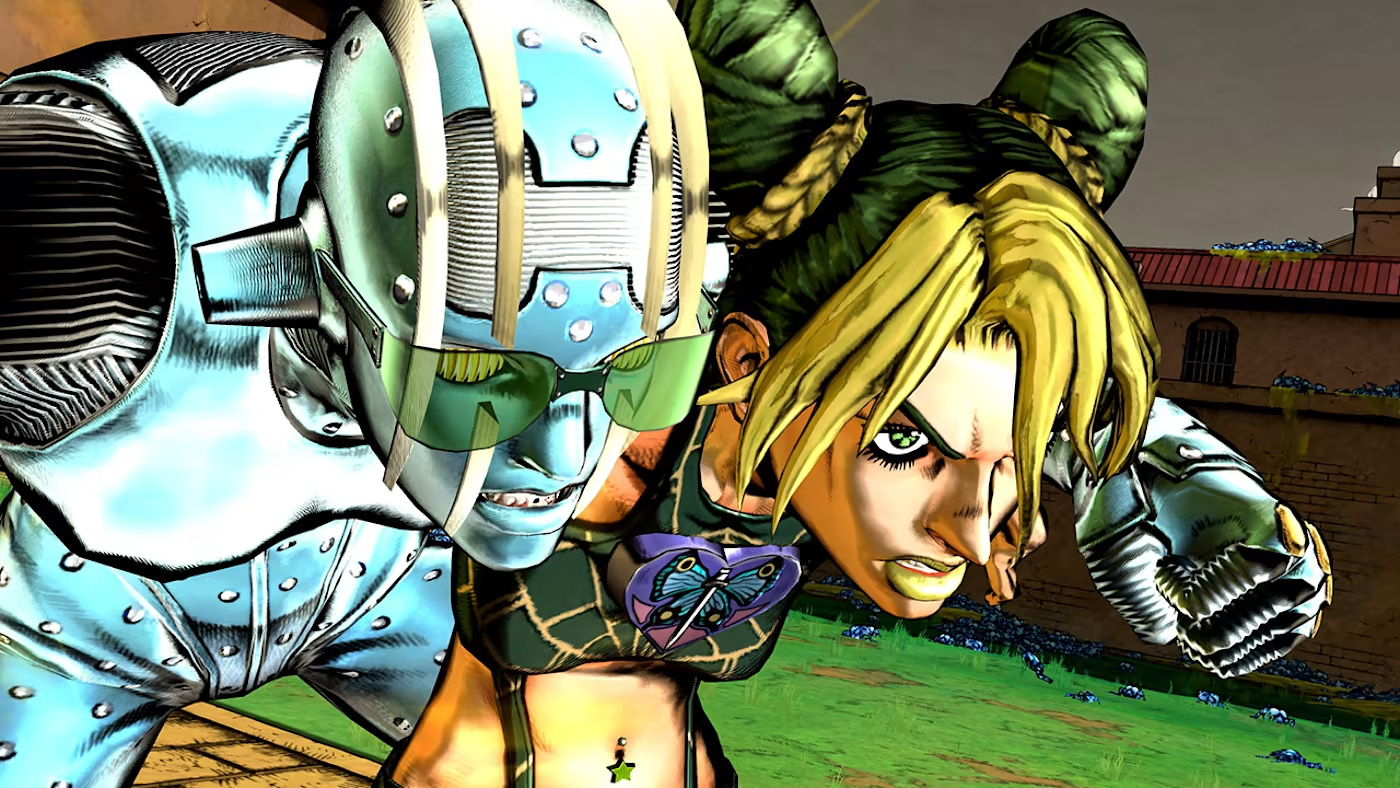 This updated release has also added an assist mechanic to its matches. Nothing about it is particularly notable when compared to more fleshed out systems found in games built with them in mind, such as Skullgirls or Dragon Ball FighterZ. It does offer up new combo possibilities, and lets you recreate some scenarios better, but feels ultimately extraneous.

There are a couple downsides to how R is approaching its additions, though. The majority of these have been lifted directly from All Star Battle’s follow up game, Eyes of Heaven – even their character portraits, and curiously, some returning ASB characters have had their art replaced by EoH renders as well. With at least four DLC characters on the way, we could see more of that recycling take place. This Eyes of Heaven sourcing, and the current anime run of Stone Ocean, also had the unfortunate side effect of overhauling Enrico Pucci’s moveset. Ostensibly this is to avoid spoilers for a twenty year old storyline, but it’s unfortunate his former iteration (and a stage that references related plot events) has been left behind. 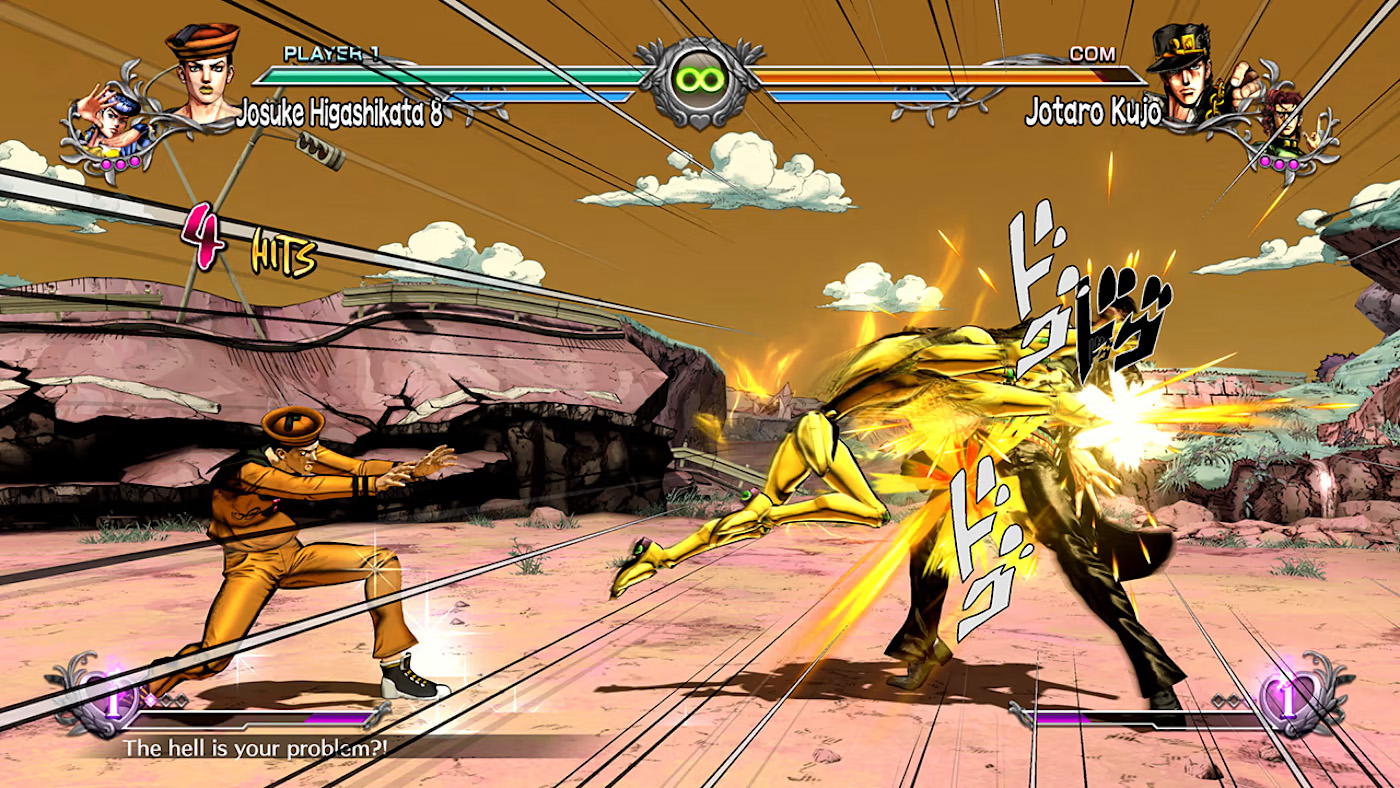 Other changes have been put in place to better line up with the ongoing David Production anime as well. Certain characters have had their default color palettes tweaked to reflect that adaptation, and in every applicable case the game’s previous voice cast has been replaced with VAs from the show. While it leads to branding synergy, some of the performances feel lacking compared to the original, purely-for-the-game dub.

Those bits could come down to personal preference, but when it comes to the game’s modes there’s nothing but improvements. Replacing the Story and Campaign modes from ASB’s original release is the new All-Star Battle mode. This gives each JoJo part a number of panels, each hosting multiple battles for you to take on. The majority of these recreate moments from the series, while others exist to represent non-canon dream matches, like DIO facing off with past and alternate versions of himself. By clearing enough of these, and using attacks or techniques that “recreate” the plot, you’ll unlock gallery and customization items that delve even deeper into JJBA.

When it comes to deep cutting fan service and near obsessive loyalty to the source, All Star Battle might be the greatest high – on those merits, I can’t imagine a more perfect JoJo game. Those aspects are the priority here, and while there’s a serviceable fighting game beneath them it’s still a less than Gold Experience. Movement can feel stiff, and for story reasons some characters have greater options or more potent attacks than others. Though there is potential for a scene to grow around this game (and thanks to support from Bandai Namco, it has been popping up at events this year) one shouldn’t expect the same kind of legs as more dedicated genremates.

Without a competitive audience or a dedicated group of JoJo fans to play with, the game’s longevity runs proportionate to your dedication to collectibles. Every member of the roster has multiple unlockables associated with them, the majority of which need to be purchased from the in-game shop. Gold is primarily gathered up via the All-Star Battle and Arcade modes, and while I’ve been able to kit out my favorites in a reasonable amount of time it’d take a Joestar-level of resolve to gather everything the game has to offer.

As one last note from a longtime fan – it’s a shame that Part 8’s Higashikata Josuke is still only based on the earliest chapters of JoJolion. This comes down to how much of that storyline was published during ASB’s original 2013 release, effectively making him more akin to a guest character. Now that his story’s complete, there was potential for his moveset to see growth – the opposite of what happened to Part 6’s ordained antagonist. Perhaps there’ll be some love for Morioh in the downloadable content, but as is its minimal presence feels odd. 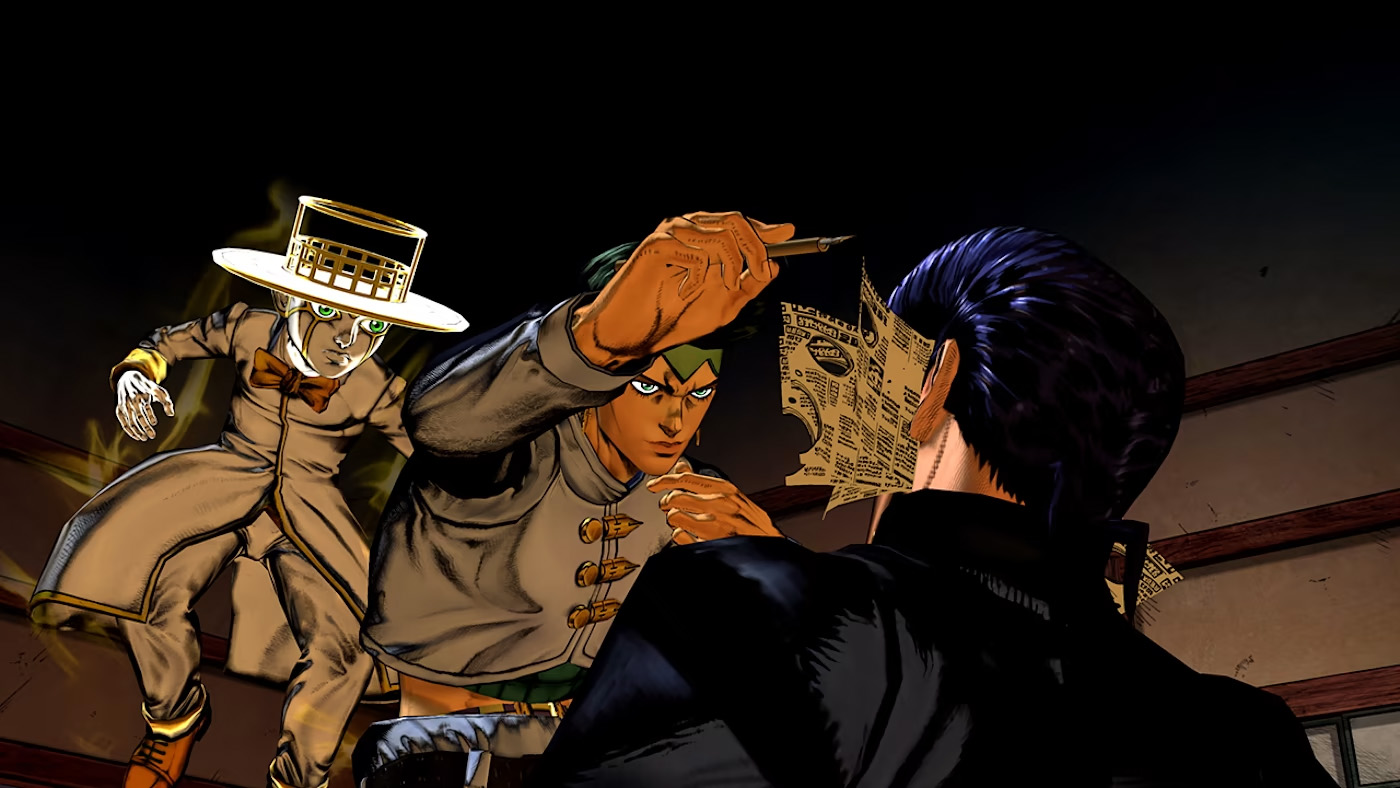 It’s truly been a roundabout path for JoJo’s Bizarre Adventure to reach its current level of popularity in the west. The more invested you are in this multigenerational epic, the more you’ll love All Star Battle R. Still, there are better choices when it comes to the fighting game genre both on Switch and beyond both in terms of gameplay and mode-based longevity. Those faults aside, as a tribute to and means with which to revisit the greater part of over one hundred manga volumes, it can absolutely Stand proud. 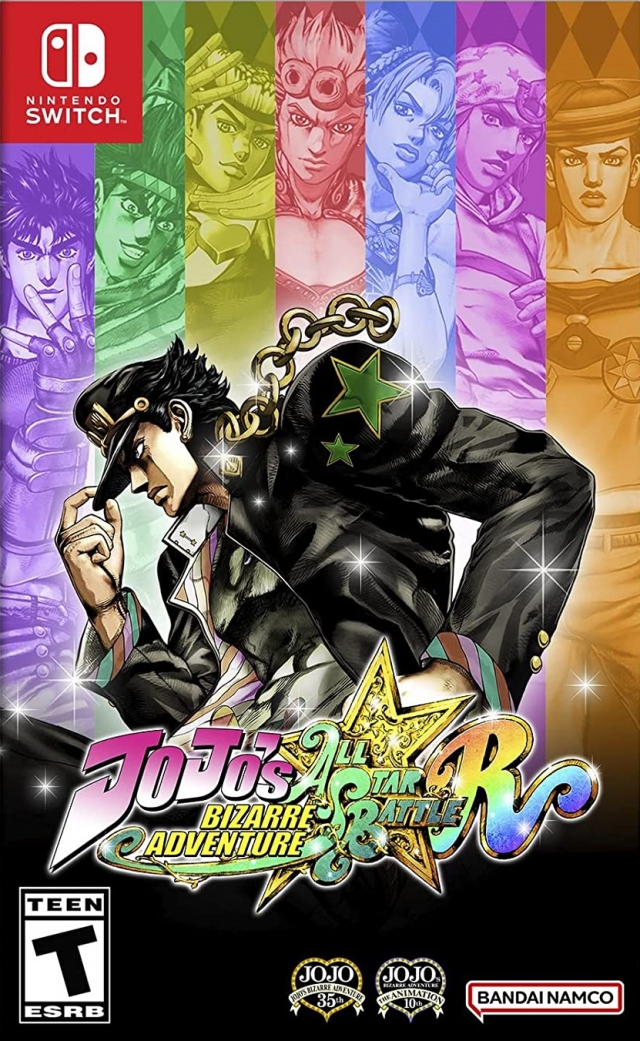