Let’s get the most obvious critique you will probably hear about Immortals: Fenyx Rising out of the way: Yes, the game is strikingly similar to The Legend of Zelda: Breath of the Wild. I’m not talking about a few one-off mechanics, either. The entire experience, from the very beginning to the very end is rife with inspiration of Nintendo’s open world masterpiece. 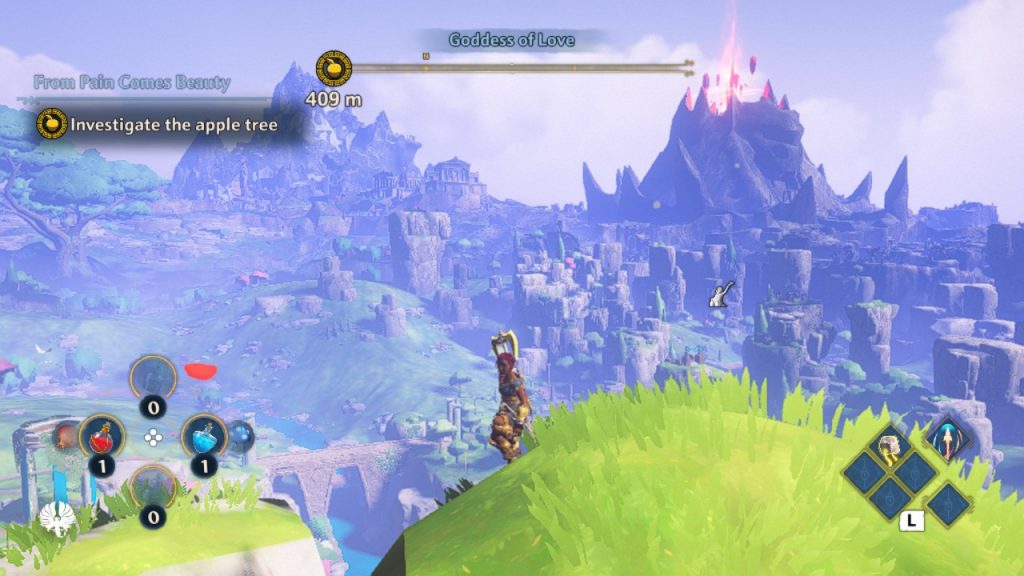 With that said, in an attempt to limit the Zelda comparisons throughout this entire review, lets just call out the major similarities right off the bat and be done with it… Ahem…

The list goes on and on. Do I feel like this is an important thing to call out? Yes. Does it affect the game negatively? Not in the slightest. Fenyx Rising took a concept that was creative, innovative, and downright fun and put its own spin on it. The end result isn’t quite the masterpiece that Nintendo churned out with Breath of the Wild, but at the same time, Ubisoft created a memorable experience that fans of the adventure genre owe it to themselves to try. So, with all of that out of the way, let’s discuss Immortals: Fenyx Rising.

Immortals: Fenyx Rising opens with a glimpse at the game’s antagonist, Typhon, an ancient evil of Greek mythology who’s hell bent on eliminating the gods and overthrowing the mighty Zeus. After his villainous monologue concludes, we’re introduced to the gods Zeus and Prometheus, who are discussing the situation they find themselves in and how a scrappy mortal named Fenyx may be their only chance at holding on to their power.

Pretty quickly into their discussion, it’s apparent that Fenyx Rising won’t be taking itself too seriously. Unlike God of War and, to a lesser extent, Assassins Creed: Odyssey, which focused on the grittiness of Greek mythology, Immortals takes a much more light-hearted approach and uses humor to help tell its story. In my opinion, this was a good choice. Greek gods were never meant to be viewed as infallible, but rather flawed and broken beings. Zeus is jealous and petty, Aphrodite is vain and arrogant, and Ares is quick to anger and bloodthirsty. Focusing on these characters’ flaws and satirizing them allowed me to humanize and relate to the gods while keeping me invested throughout the story they were telling. 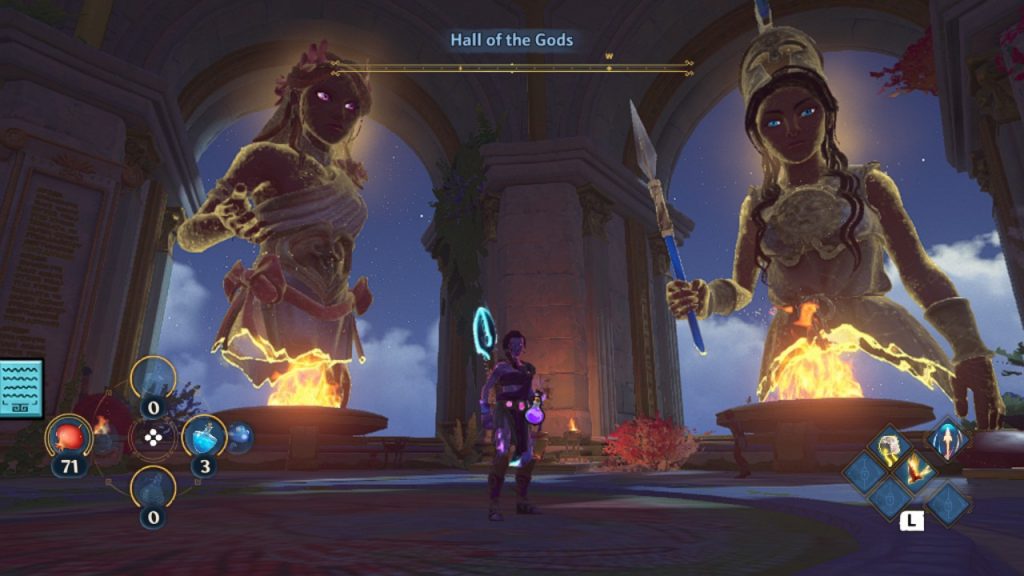 Hopefully the light tone is something that you find endearing, as well, as Zeus and Prometheus will be narrating your journey from start to finish. That’s right! Get ready for one liners, zingers, sex jokes, and even a little bit of Greek history as you journey across the Golden Isle. At first, I wasn’t sure how I felt about the constant commentary throughout my journey, but I quickly grew to appreciate it. For the most part, it was entertaining; I even laughed out loud at a few of Zeus’ observations. But it’s not just our narrators who act this way. Every single character in this game (with the exception of Typhon) feels the need to be funny at all times. Once again, going with a humorous approach isn’t a bad thing, but from time to time, it felt a bit forced and I even skipped a line of dialog or two.

While the tone of the game is light, the action and exploration is anything but. So without further ado, let’s explore the vast world of the Golden Isle.

Welcome to the Golden Isle

Fenyx Rising takes place in the vast Golden Isle, a massive open world inhabited by the gods. Like other open world games before it, Fenyx Rising pretty quickly gives you the freedom to explore this massive land any way you see fit. In terms of scale, it’s hard to say just how large the map is in Immortals, but it’s easily feels on par with games like Breath of the Wild and Skyrim.

To help you explore this strange new land, Fenyx is blessed with several mythical pieces of hardware: a legendary sword and axe made for killing baddies, The Bracers of Hercules, which allow you to levitate heavy objects and toss them at your foes, and the Wings of Daedalus, a mythical glider which allows you to travel the world with ease. It should be noted that the wings are dependent on your stamina meter to keep you in the air, so going long distances without a stamina upgrade or a stamina replenishing potion is pretty much impossible (sound familiar?). So, yeah… the gliding mechanic looks and feels nearly identical to the paraglider in Breath of the Wild, so much so that my muscle memory almost immediately kicked in when I started using it. Not a bad thing at all — just familiar. 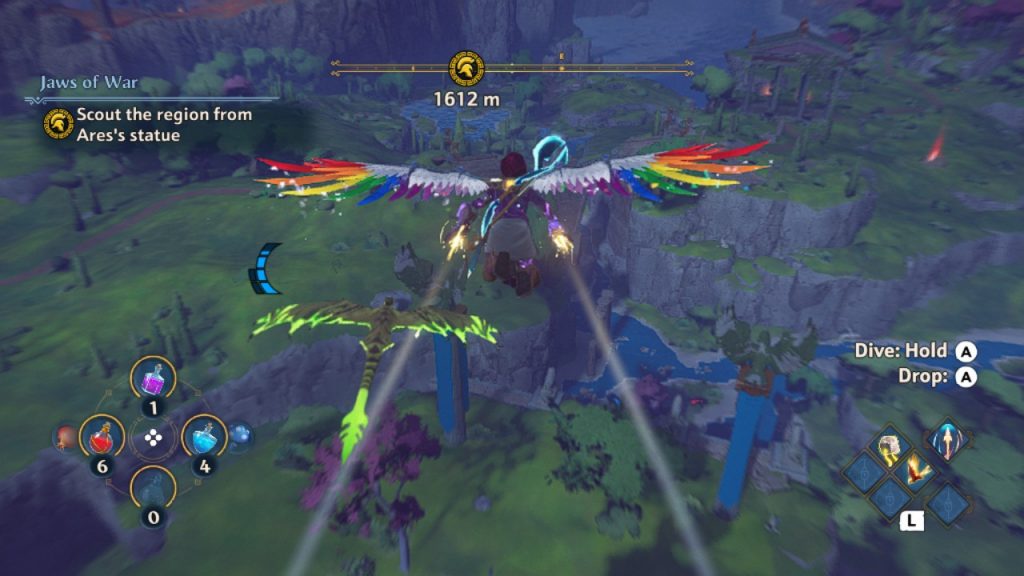 Fenyx Rising lets you explore the land at your own pace. Want to scrap the story for a bit and just explore? You can do that. Want to just spend an afternoon collecting berries and hunting rare monsters? You can do that too. The game never puts pressure on the player to get moving to complete the story. It’s all paced how you want it to be paced. However, while I enjoyed traversing the lands and discovering its secrets, I found myself wishing for a bit more human interaction. The Golden Isle has been largely decimated by Typhon, so NPCs are few and far between. Cities are empty, homes are destroyed, and temples are devoid of life. A bit more mortal interaction in the world would have really made exploring its vast lands more exciting and make the world feel a bit more alive. What is there, however, is still a joy to experience.

In my first hour exploring the world, I encountered a mythical enemy which killed me pretty much the moment I tried to fight it, I stumbled in a vault with a physics-based puzzle to solve, and I even tamed a wild horse that I could summon at any time by pressing the X button. The game never points these things out to you on the map or directs the player to do these tasks. They’re just there, ready to be explored or not explored depending on the player’s preference.

Once you’re fully equipped with your demi-god-like abilities, you’re ready to get into some scuffles! Lucky for us, combat in Fenyx Rising is pretty darn enjoyable and easy to learn. You perform melee attacks with a sword or axe, fire a bow for tricky airborne enemies, and parry an enemy to temporarily stun them. Each foe typically has a visual tell which you must learn to defeat them while taking minimal damage, but you have to be pretty quick to win a battle completely unskathed. Finding the right combination of quick sword thrusts and slower, more powerful axe swings, combined with perfect dodges and parries, is key to winning a difficult fight. Bosses are no exception to this formula, but you definitely have to stay on your toes when facing some of the bigger baddies. They are predictable, but one slip up could cause you a swift death. 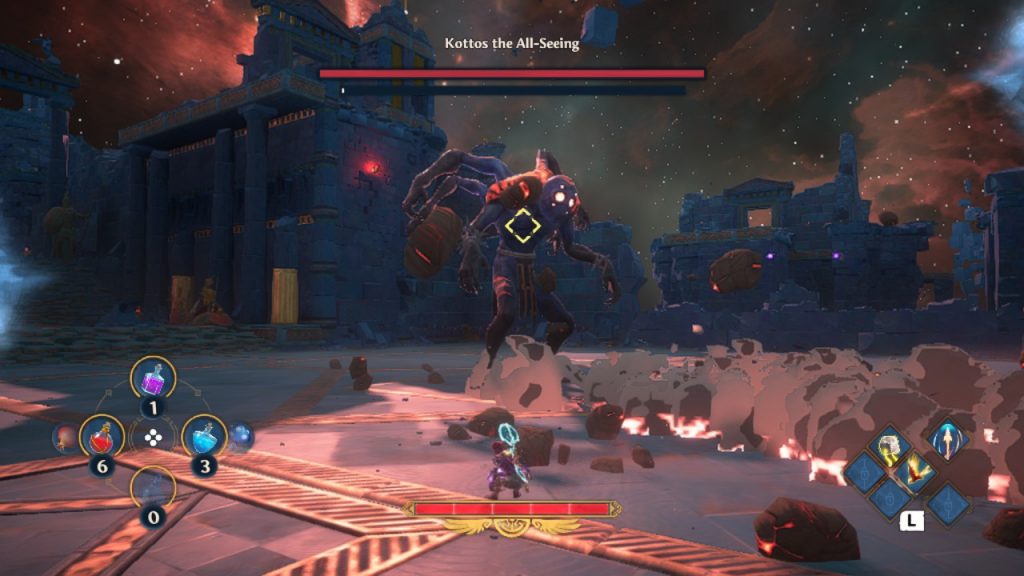 And what good is an adventure game without character progression? Fenyx Rising doesn’t work on an EXP-based system, but instead grants you upgrades and power ups for completing tasks, collecting rare crystals, and finding bits of Zeus’s lightning bolts hidden in secret vaults throughout the map. I hate to do this again, but the vaults are best compared to the Shrines from Breath of the Wild. They’re hidden throughout the world and contain puzzles, mazes, and various combat challenges. The lightning bolts you find in these sections are even used to increase your stamina meter, for crying out loud! Long story short: if you loved the shrines in BotW, you will likely love the vaults in Fenyx Rising. 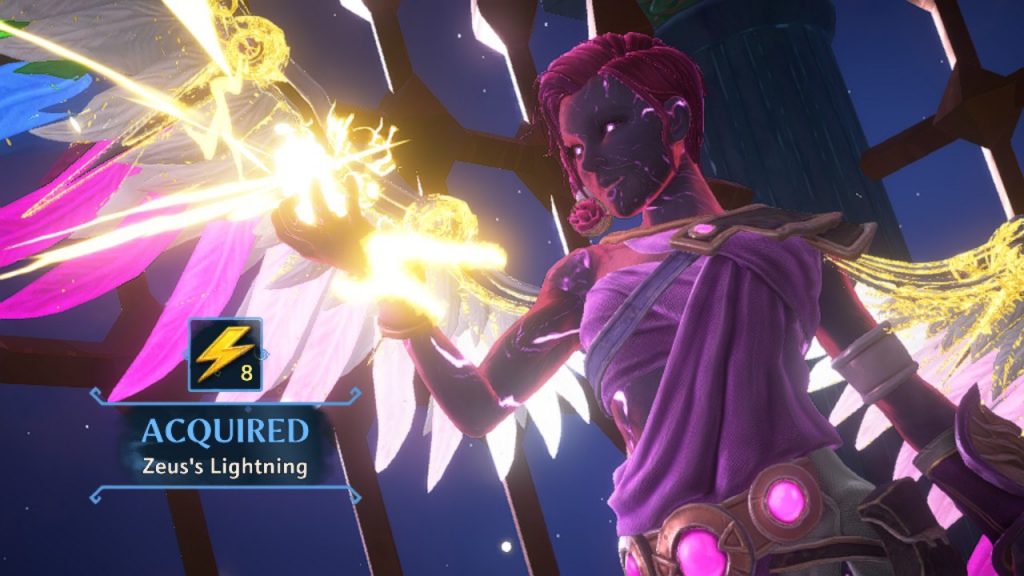 Once you’ve collected enough materials scattered throughout the world, you can strengthen armor and weapons, craft new gear, add to your life bar, and so much more. Get ready to do a LOT of grinding to find the materials needed for strong upgrades; despite this, though, the process is consistently enjoyable.

Immortals is one of those rare games that aims to hit every single platform at launch, with releases on the PlayStation 5, Xbox Series X, PC, PS4, Xbox One, and, of course, the Nintendo Switch. While the other consoles get a pretty polished visual experience, the Switch version needed to make a few concessions. The resolution is noticeably scaled back, texture pop-in is pretty much happening all the time when flying or riding on horseback, and a layer of fog is added to make the transition between areas less jarring. 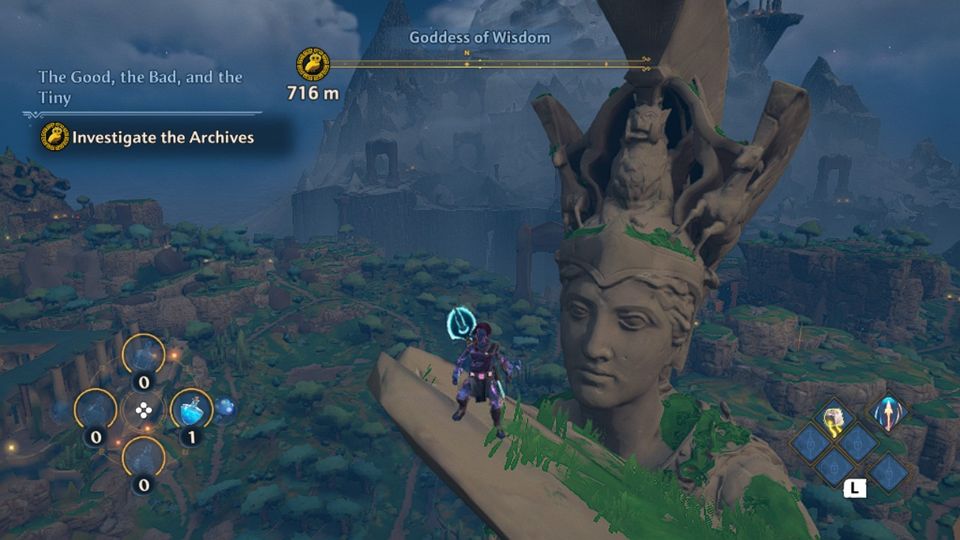 But when all is said and done, none of this hindered my experience with Fenyx Rising. It was just as fun and enjoyable playing the Switch version as it was playing the PC build I played earlier this year. Even playing in handheld mode gave me a consistent experience that was on par with playing docked. The Switch version might not be the most graphically appealing version of the game, but the inclusion of handheld mode for portable play is enough to make this a version worth recommending. If you own a PlayStation 5 and have no intention to play in handheld mode, of course, get a next-gen build of the game. But for Nintendo diehards and portable players, Fenyx Rising is the authentic experience on the Nintendo Switch.

Immortals: Fenyx Rising truly took me by surprise. I’ll be honest and say that I was never all that excited to get my hands on the game when it was announced a few years back. But Ubisoft managed to create fantastical open world game, filled with Gods and Monsters, that exceeded my expectations and then some. It’s witty, familiar, but at the same time, a completely new experience. It’s open world may not be as filed with life as I would have hoped, but what is there is surely worth your attention. While it doesn’t quite reach the nearly unreachable heights that Breath of the Wild hit some years ago, Immortals: Fenyx Rising still manages to carve out its own place in the adventure genre.