If you haven’t been paying attention, it’s easy to be wary of mobile games that make their way to consoles. More often than not they were designed for a different type of experience, like being held in a single hand versus played with a controller. That’s not even getting into the ‘bite sized’ nature they sometimes bring.

That line has been blurring more and more though. The Pokémon Company has seen fit to launch certain mobile games on Switch simultaneously, and Among Us is so successful it’s sus across all platforms. The standalone Kirby Clash titles went the other direction, adopting mobile sensibilities like real time stamina bars for its play structure.

Now on Switch a new standout has arrived, in the form of the previously Apple Arcade exclusive Grindstone. Cabybara Games are no strangers to the mobile and handheld landscape, with their experience and sensibilities making Grindstone a hit on the then new service platform. Being without an iPhone, though, I’m only now getting to experience what an addictive puzzle experience this gem is.

Grindstone puts you in control of Jorj, an absolutely angry and absolutely jacked mountain man carving his way up Grindstone Mountain. And I don’t mean the rockface, he’s cutting down thousands of gross little monsters called Creeps on his way to the top. The plot and structure really only serve the replayability (over 200 levels) here, with the real sellers being the game’s aesthetic and its gameplay. 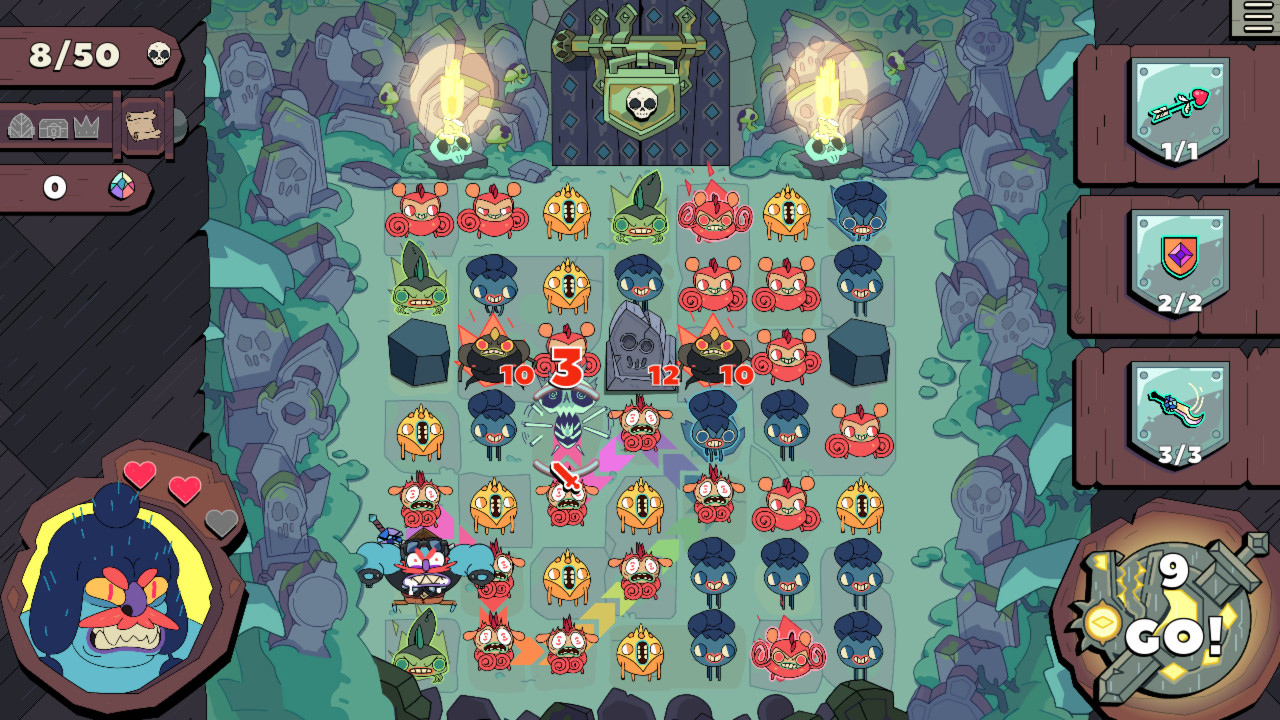 Right out the gate, Grindstone draws you in with its cartoon-like visuals and animations, feeling like an affectionate blend of Adventure Time and some deranged graffiti on the side of that bar or cafe down the street you always think about checking out – and I mean every word of that in the best way possible.

Jorj alone is disproportionate and topheavy, but it gives his animations weight. He contrasts all the gibbable and stylized Creeps that you’ll be staring at well, with the same vibe existing across the game’s inn-based menus and shopkeepers. Capy once put together their own animated ads for previous game Super Time Force, and seeing them embrace and expand on that style is a real treat.

With its gameplay, Grindstone manages to be at once simple and addicting – something that complimented its mobile roots well and is still intact on Switch. Every stage or “room” of Grindstone Mountain has a goal. These include killing the most Creeps, taking out certain specific enemies, or gathering a certain number of items. Some of these will be the “main” objective and the only one needed to clear the room, while the others are incentives to keep playing on a given floor. 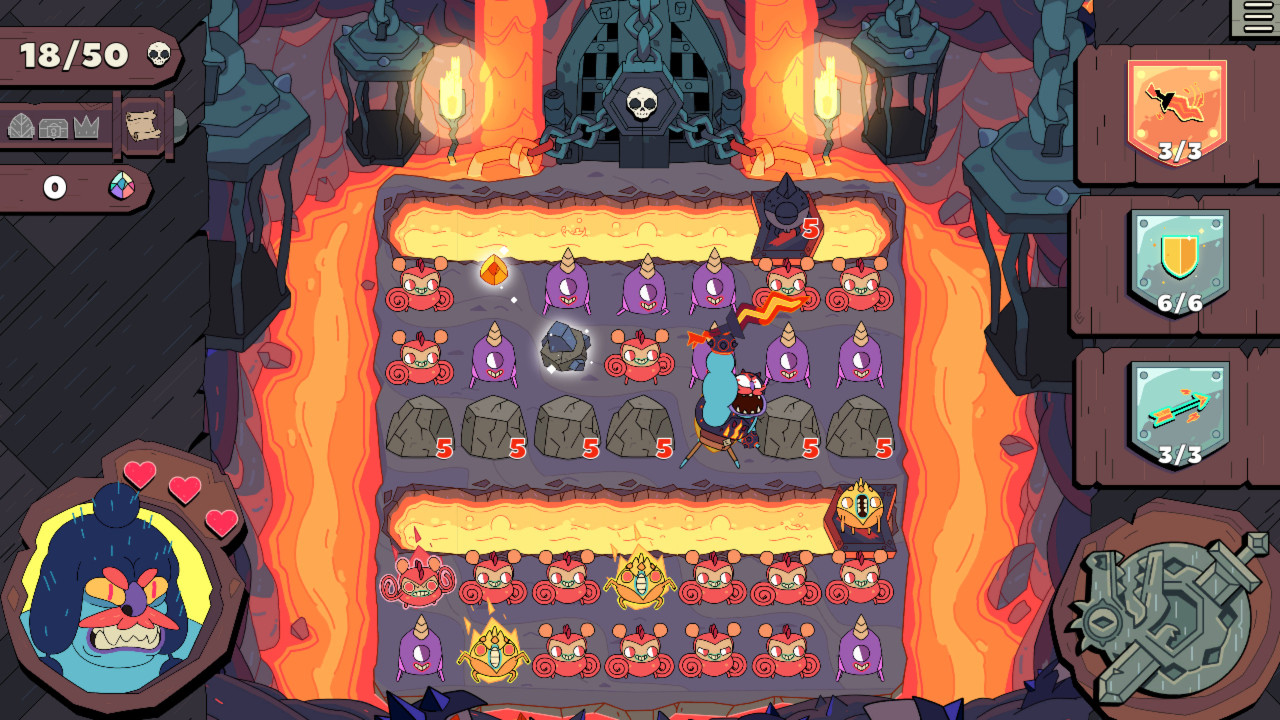 Though getting through the floors and reaching the eventual top of the mountain is your objective, the real goal is pure, uncontained greed. How Jorj kills Creeps is based on connecting a line of like-colored enemies, with diagonals being okay. So let’s say there are green, purple, and yellow Creeps on a stage. You’ll only be able to continuously cut through one color (say purple) to build up a combo. Getting enough (with ten being the lowest threshold) will grant you the game and mountain’s namesake: a Grindstone.

As your combo climbs, so does the value of your Grindstone. While that’s nice in its own right, the real benefit of these is that connecting a line up to a Grindstone (and some other kinds of enemies, and objects) lets you change your color. This is huge for racking up combos and plays into the game’s puzzle nature. Do you just aim for the longest lines you can, or do you put together a few smaller ones first to climb towards screen-clearing slaughters? 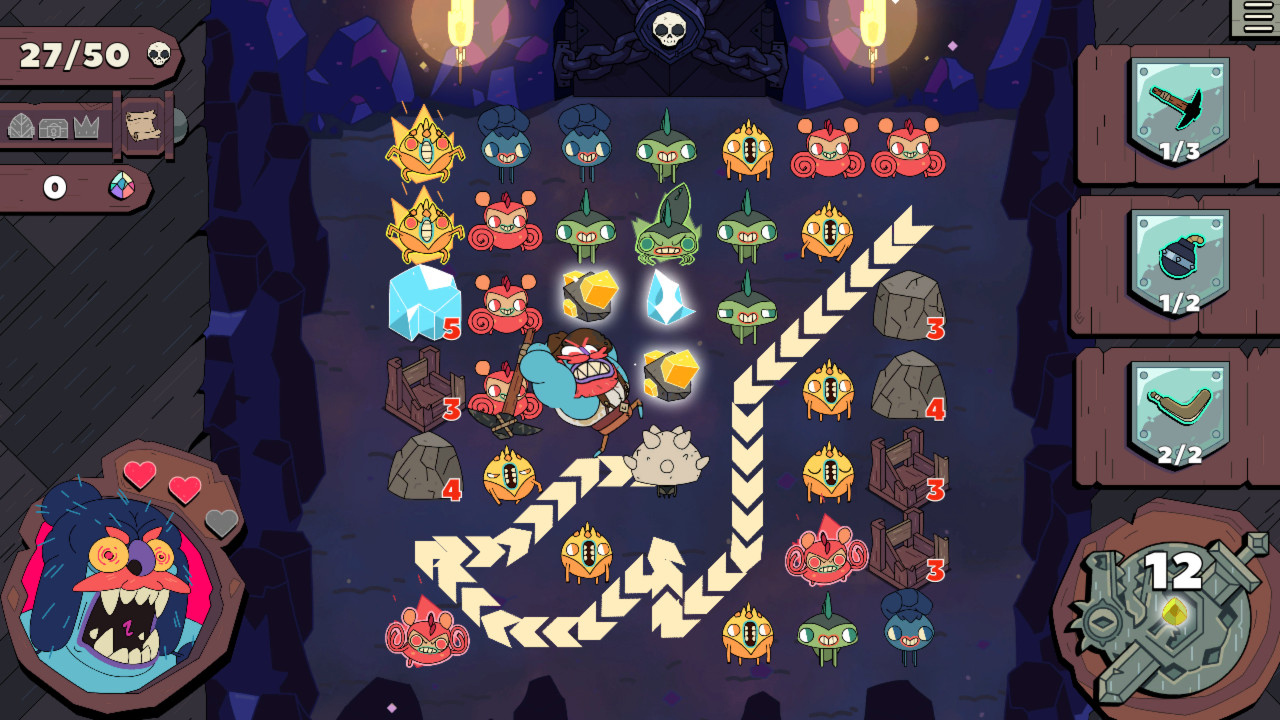 Keeping you from just ‘grinding’ non-stop is the fact that the longer you’re on a stage, the more violent the Creeps get. Dealing with this increase in danger (Jorj will lose one of his three health points if he finishes next to an attacking Creep) while also lining your pockets is Grindstones biggest strength. I’ve lost massive payouts because I thought I could manage one more wave of enemies, but that just makes me want to make things work even more.

Climbing to the top

Aiding your survival (and your hoarding) are unlockable equipment, recurring objectives, and daily online leaderboards. All of this feeds into the core loop, giving you short term objectives and goals on top of the main mode. I will admit I’m not a fan of replenishable items, as you have to keep paying out your earned Grindstones and resources to use them, but that’s what they’re there for. Ironically, if you’ve got a tendency to hoard in games you might have a tough time with Grindstone’s structure.

As is the case with many a puzzle game, if you’re not sold on one main idea being redone again and again you might not gel with Grindstone. As a game made for phones, it also lends itself slightly better to quick pick up and play sessions which can work on Switch, but is made a little more laborious due to needing to load the game up and the inability to multitask. I’ve had plenty of fun with Grindstone on Switch and it does come recommended, but if you’ve got an iPhone do consider checking out the Apple Arcade version as an option too. 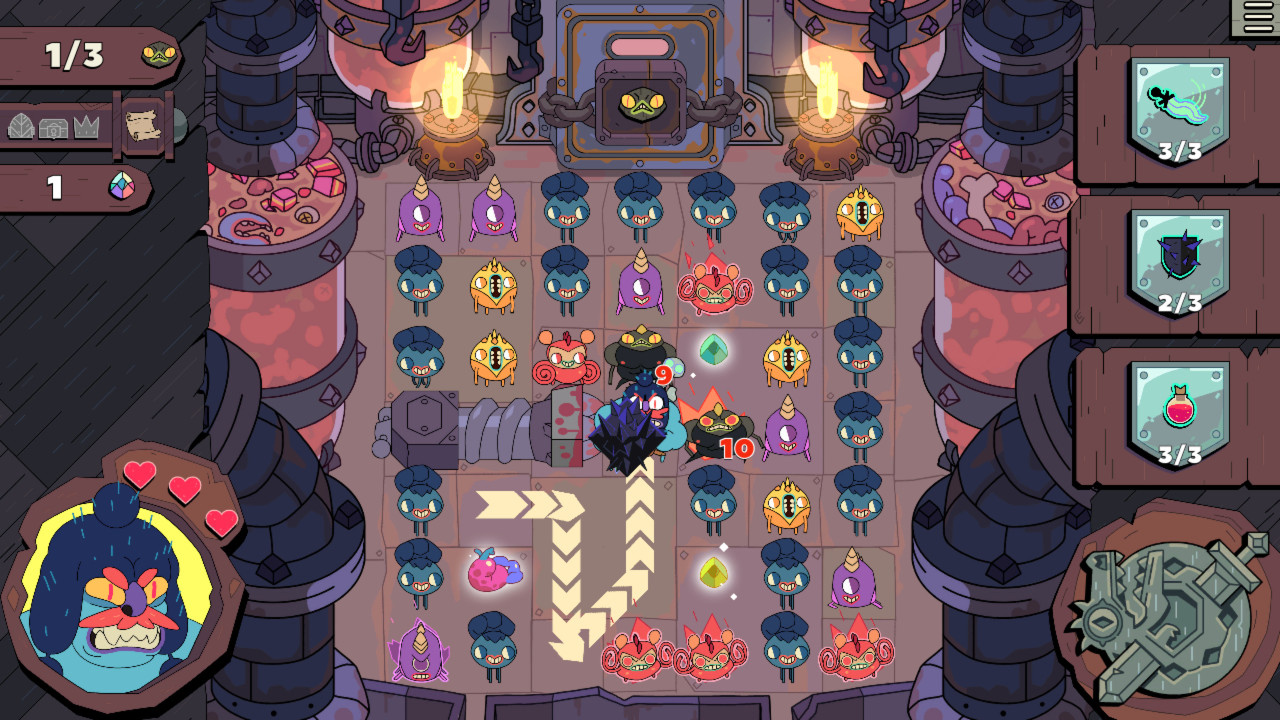 If you’re into its visual style and addictive, puzzling experiences then Grindstone stands with the best of ‘em. No matter how many times I saw (and heard) it, I never got tired of Jorj massacering Creeps by the dozens in a dervish dance of steel and bulging veins. Once I got out of my stockpiling mindset (you can always earn more Grindstones) I was gifted with an experience I couldn’t put down. 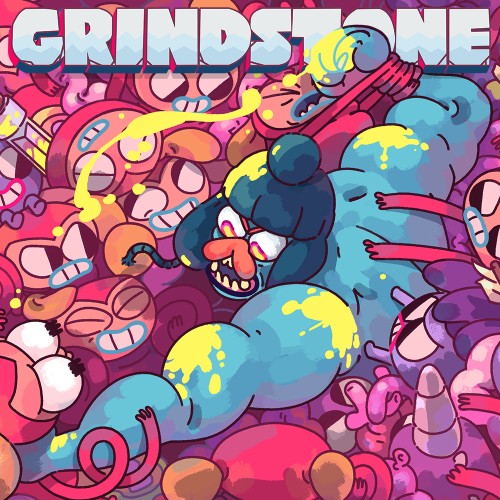