Fitness games have come a long way since they were first introduced all the way back on the NES. Every console generation pretty much had something. You had Track and Field on the NES, the incredibly expensive Lifecycle set for the Super Nintendo, and even games like Dance Dance Revolution really helped gamers get off of their butts to work up a sweat. But it wasn’t until Wii Fit came out back in 2007 that fitness games would become a whole lot more than just a simple gimmick. I’ve touched on my personal fitness journey a few times in the past, but I think it’s important to mention how important Wii Fit and the balance board was for me. Wii Fit became a part of my everyday routine and I lost a lot of weight and gained a lot of confidence because of it. I owe Nintendo quite a bit for creating such an innovative workout program catered specifically to people like me.

So, here we are, 13 years later, and Nintendo continues to innovate in the world of health and fitness related gaming. Fitness Boxing 2: Rhythm & Exercise has come out two years after the original, and while the game’s fun and innovative, it’s ultimately a flawed way to get off the couch to burn some calories. With the extremely effective Ring Fit Adventure widely available, Fitness Boxing 2 might be a bit more difficult to recommend. All is not lost though: after 14 days of continuous play, I realized that the two games can easily coexist and even add some variety to an everyday routine — when the two games are used together.

The premise of Fitness Boxing 2 is pretty simple. It tasks you to get off the couch, strap on your Joy-Con, and punch the air to your heart’s content. There’s a variety of modes and punches you can throw to work up a sweat and actually get a pretty effective workout in. The game asks you to time your punches along to the beat of a handful of instrumental tracks from big name artists. Like with the original Fitness Boxing, these are purely instrumental reimaginings of music, rather than the original tracks themselves. For that reason, this followup title is also a bit of a letdown… but I understand why it’s important to prioritize the commands of the trainer rather than the lyrics of the included songs. 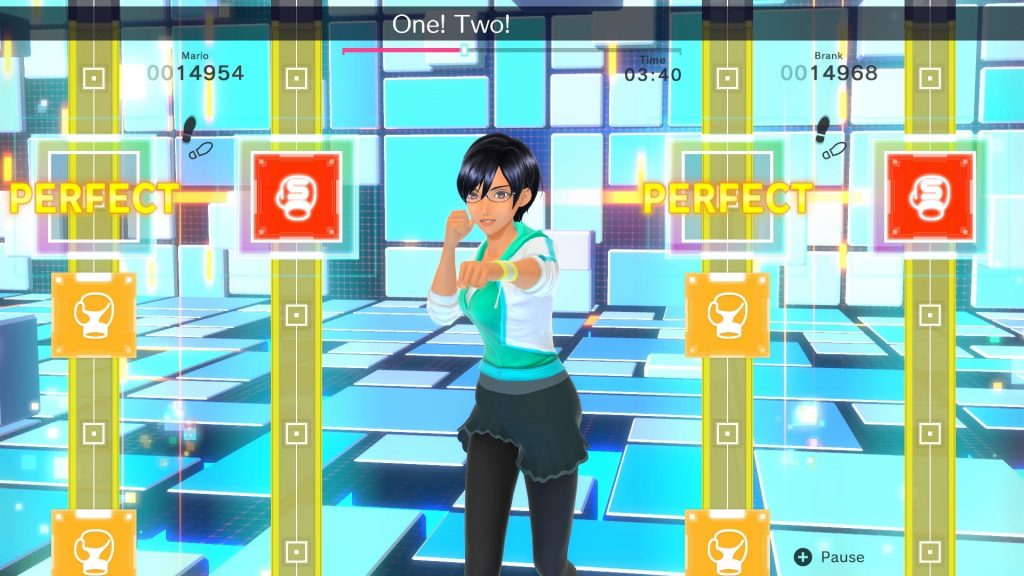 The most common punches you’ll be throwing are hook jabs and uppercuts, along with some ducking. Depending on the mode you select, the punches can move slowly, or on the higher levels, quite fast. While the idea of Fitness Boxing 2 is pretty simple, I was surprised with just how effective it was at getting my heart rate up and making me feel legitimately tired after a longer session. It doesn’t give you the full body workout that Ring Fit Adventure would, but it’s definitely more accessible and easier to pick up for people just starting out in the world of video game fitness.

The game offers multiple modes that include single session workouts, challenges, and even a multiplayer mode where you can punch along with your friends locally. Unfortunately, online play is absent from Fitness Boxing 2, which is actually a pretty big letdown. In this world of COVID-19, it would’ve been fantastic to be able to play with a friend and keep each other motivated while stuck inside. 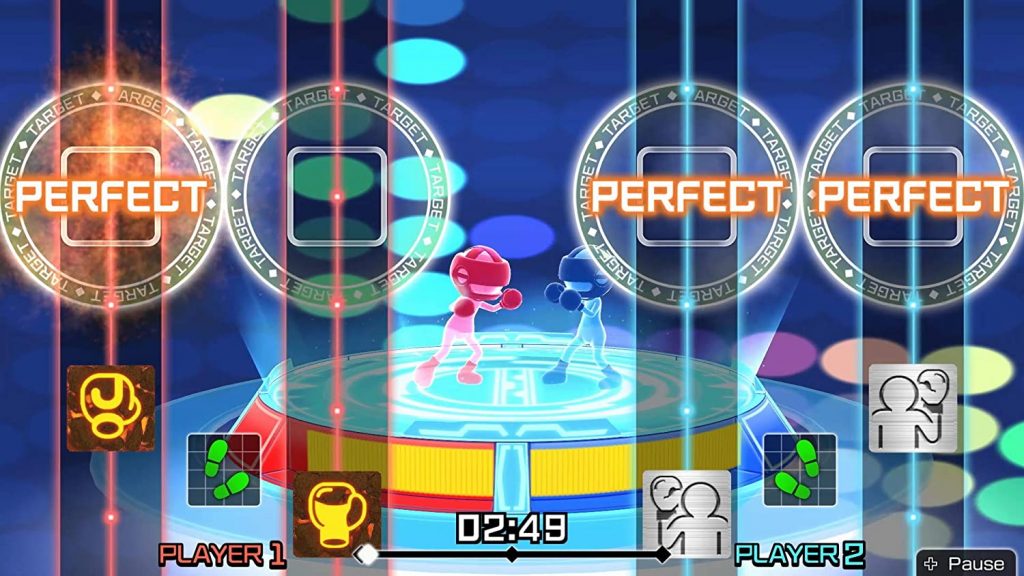 Fitness Boxing 2, like the original Fitness Boxing, also gives you the ability to swap out your trainers and their outfits. I did this quite a few times and found it to be much more cosmetic than anything else. Swapping outfits didn’t really enhance gameplay for me personally, but if you’re looking for some variety, maybe it’ll be a feature that you’ll appreciate more. When it comes to the trainers, they have slightly different personalities, but the diversity is pretty minimal and not something that got me overly excited. You’ll be spending a good deal of time with your trainer though, so the ability to swap them out just to hear a fresh voice is a welcome addition.

Routine is something incredibly important when starting a new workout. Consistency is key and Fitness Boxing does its best to keep players coming back for more every day. Your trainer will give you encouragement when they see you returning multiple days in a row, and you can see your fitness journey unfold on a map with stamps showing your progress for the month. While the stamps might seem like a minor feature, these little things really do help you stay motivated to keep coming back. If you have a long streak on your calendar, you definitely want to see that streak get longer.

The variety aspect is where Fitness Boxing 2 really falls behind Ring Fit Adventure. While there’s  a decent selection of punching techniques and combos you can swap between, the feel of the game is pretty similar every time you start up a session. But, as I mentioned in the intro, I really feel that Ring Fit and Fitness Boxing 2 can coexist fairly well. My routine has involved playing Fitness Boxing 2 for 20 minutes as a warm-up, and then closing out my day with about 45 minutes of Ring Fit Adventure. This technique actually gets my heart rate up and gives me more intense cardio than Ring Fit typically provides me on its own. While Ring Fit focuses on working out my muscles, Fitness Boxing does a much better job at getting my heart rate up while consistently burning calories. 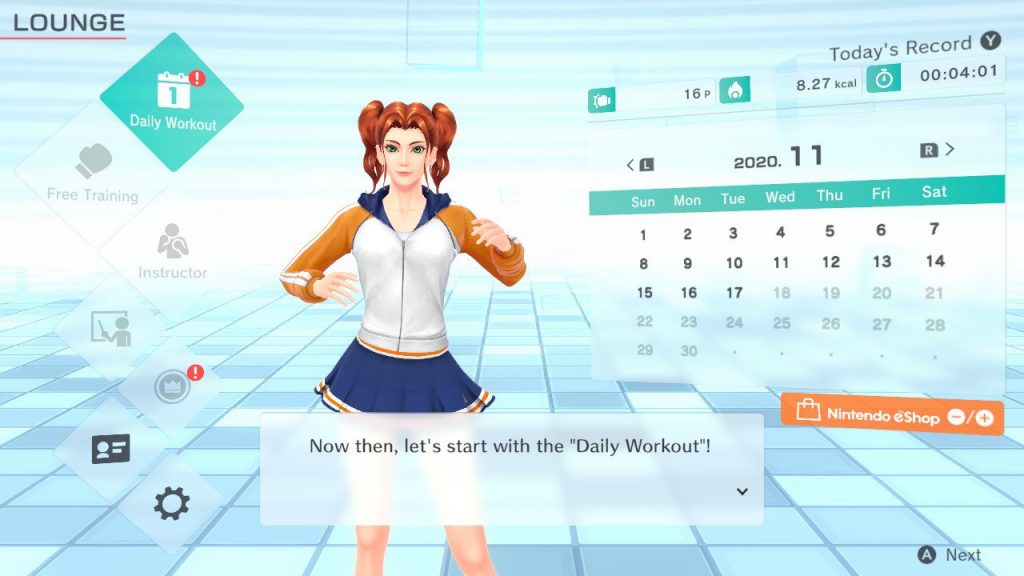 Now, quickly on to the comparisons between the original Fitness Boxing and Fitness Boxing 2. Not a lot has changed this time around, as the routines are very similar. Some new trainers and music tracks have been added, but you can expect a lot of the same if you’re a veteran of the series. Some new options have been added that allow you to better tailor the movements of the game to your personal playstyle, including the ability to turn off movements that may be difficult for players to do physically. Long story short, the differences between these two games are minimal.

The game comes with a large selection of new tracks ranging from “YMCA” from the Village People to “Hot N Cold” by Katy Perry. Once again, these are not the original tracks from the artists so don’t expect any vocals in your play sessions. (If you’re looking for original music to burn some calories to, you might be better off with Ubisoft’s Just Dance series instead.) Overall, I wasn’t very impressed by the music selection — but the variety wasn’t as poor as the first game. 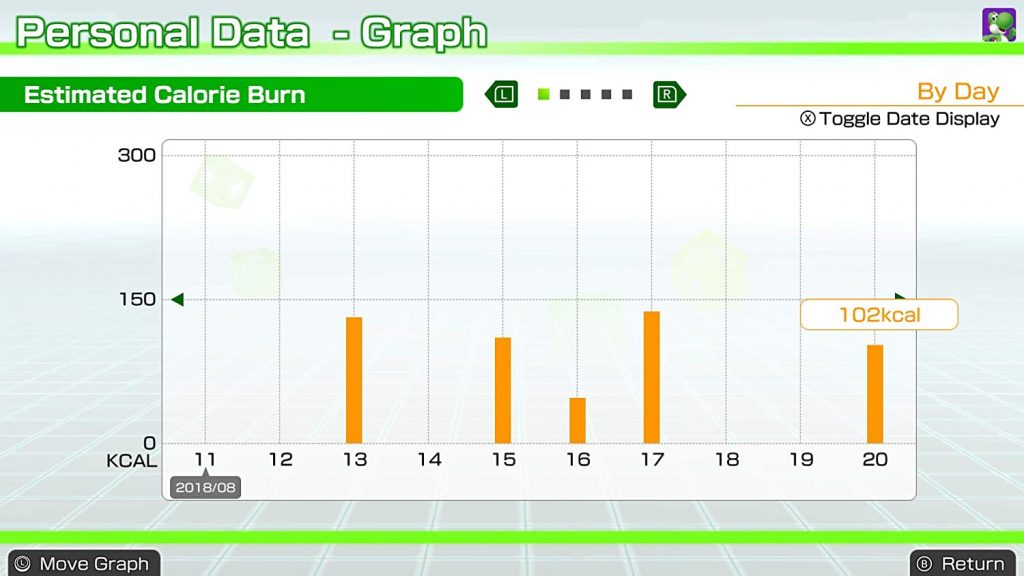 That leaves us to the technical issues that Fitness Boxing 2 carried over from the original. The first Fitness Boxing had issues with motion tracking, specifically with uppercuts and jabs. I noticed that the same issues are still present in Fitness Boxing 2. I think it’s important to add that these issues were not totally consistent during my playthrough, but they occurred often enough to become annoying — I ended up adjusting my playstyle to minmize their impacts. I also found myself performing exaggerated movements in hopes that the controller would magically pick up what I was doing. This was a major complaint I had when the first game came out, and two years later, I would have hoped that these issues were addressed and resolved. In the end, if you find yourself missing punches, it’s probably not your fault.

If you can only choose one fitness game to play in 2021, Fitness Boxing 2 is a difficult recommendation to make. Ring Fit Adventure is a much more innovative and effective workout tool for the Nintendo Switch. However, there’s a way to remedy this: if you’re looking to supplement your workouts with additional cardio, Fitness Boxing 2 is a possible solution.

For any players who are intimidated by the Ring-Con accessory and are looking for a more simplistic workout experience, they may enjoy punching along with Fitness Boxing 2. 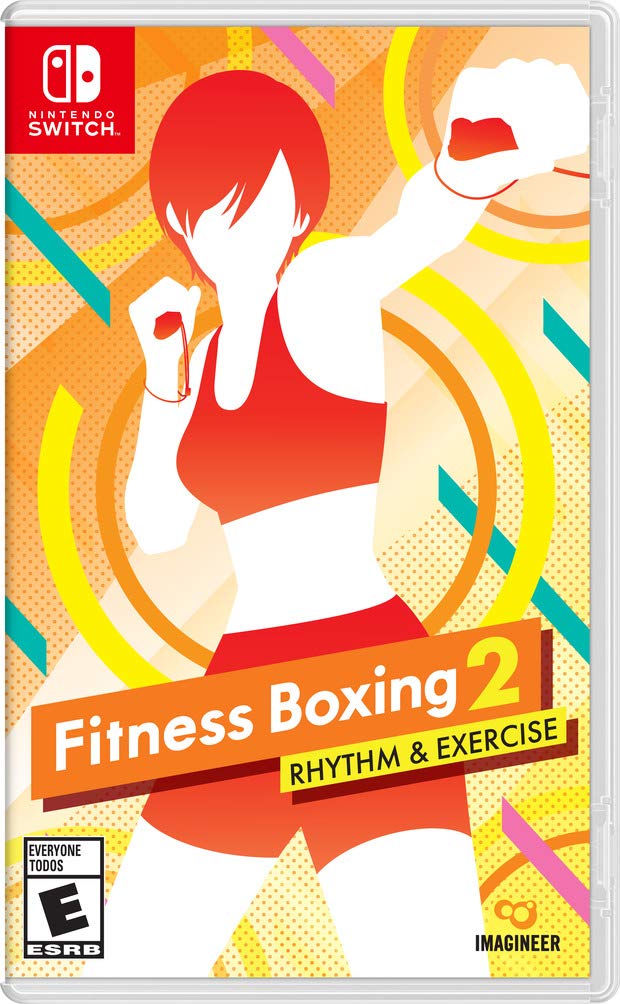