I’m going to get the obvious out of the way now – Eldest Souls is (openly, proudly) inspired by Dark Souls and other games of its well-worn cloth. FromSoftware’s work has had a notable and lasting impact across gaming but rather than some mechanics or a memetic comparison, Eldest aims to replicate the Soulsborne experience in its own stripped down way. Don’t mistake “stripped down” to mean it’s light or superficial, though, as Fallen Flag Studio have crafted something all their own through a gush of blood and gorgeous pixels.

What narrative the game delivers is implied and discovered either through scraps of text strewn about or via conversations with various NPCs. The immediately known is you are a Crusader wielding a sword of pure obsidian (from the moon) and it’s on your cloaked shoulders to slay the old gods of your world. Fittingly, the environments are primarily muted and medieval before giving way to more varied and vibrant locales. 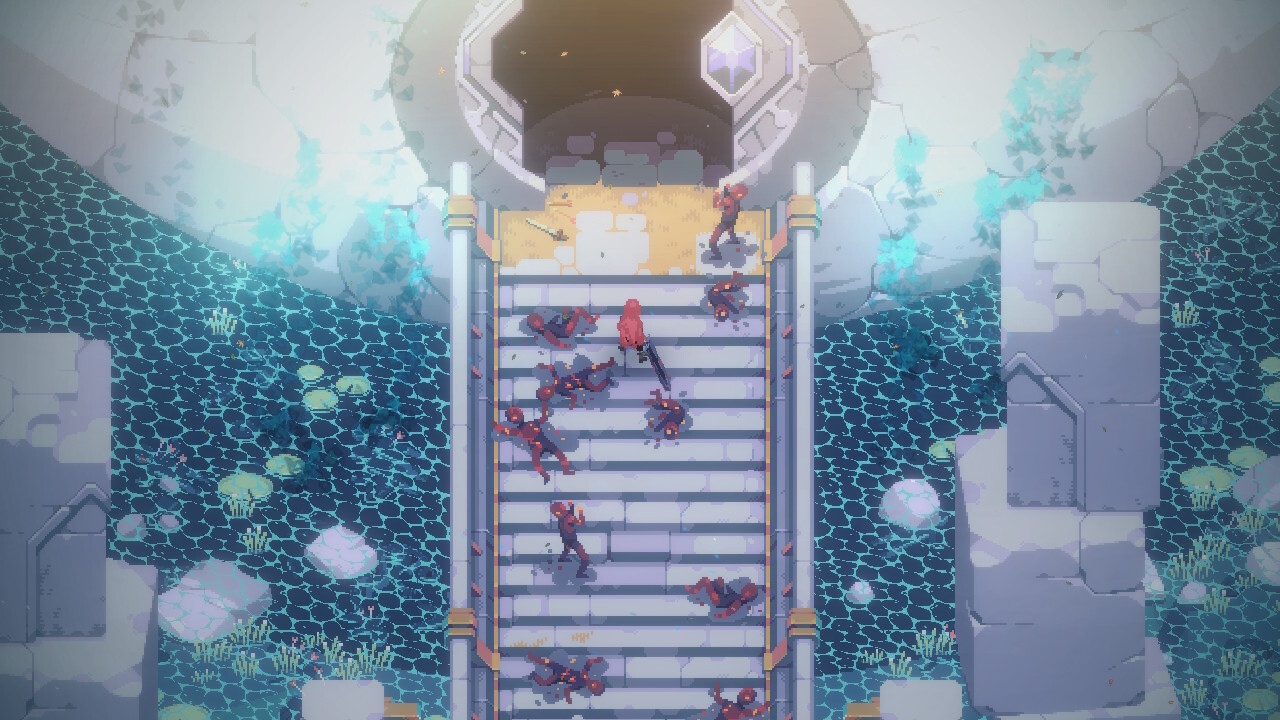 Regardless of the bleakness of those starting areas, the pixel art Eldest Souls so proudly touts is gorgeous through and through. Most impressively is that its artistry compliments the gameplay where it matters most. It’s one thing to create designs and animations for a boss, but to extend that to their attacks and tells while seldom seeming incomprehensible or “cheap” from a player perspective is repeatedly impressive.

It’s not just the visuals that sell this one, though. Far from it, the reason I sank hours and so many digital casualties into Eldest Souls was the fights. Each of the encounters was a test of patience and active learning, often becoming an entirely different challenge halfway through a health bar. The first god I faced off with was an orb of fire and water that could split in two, rotating through telegraphed but no less potent attacks. After taking on the two bosses immediately before it with a handful of tries each, I thought I had the game figured out.

I was very wrong, and proceeded to die nearly one hundred times to that one boss.

For clarity, anyone put off by the Sisyphian nature of my own attempts will be happy to know that I could have left to take on a different boss instead at any point. I also could have changed my offensive skills (more on that later) to alter my approach. Instead I tried, and tried, and tried again. That flexibility in approach is welcome, but in beating it my way I couldn’t help but feel more accomplished. 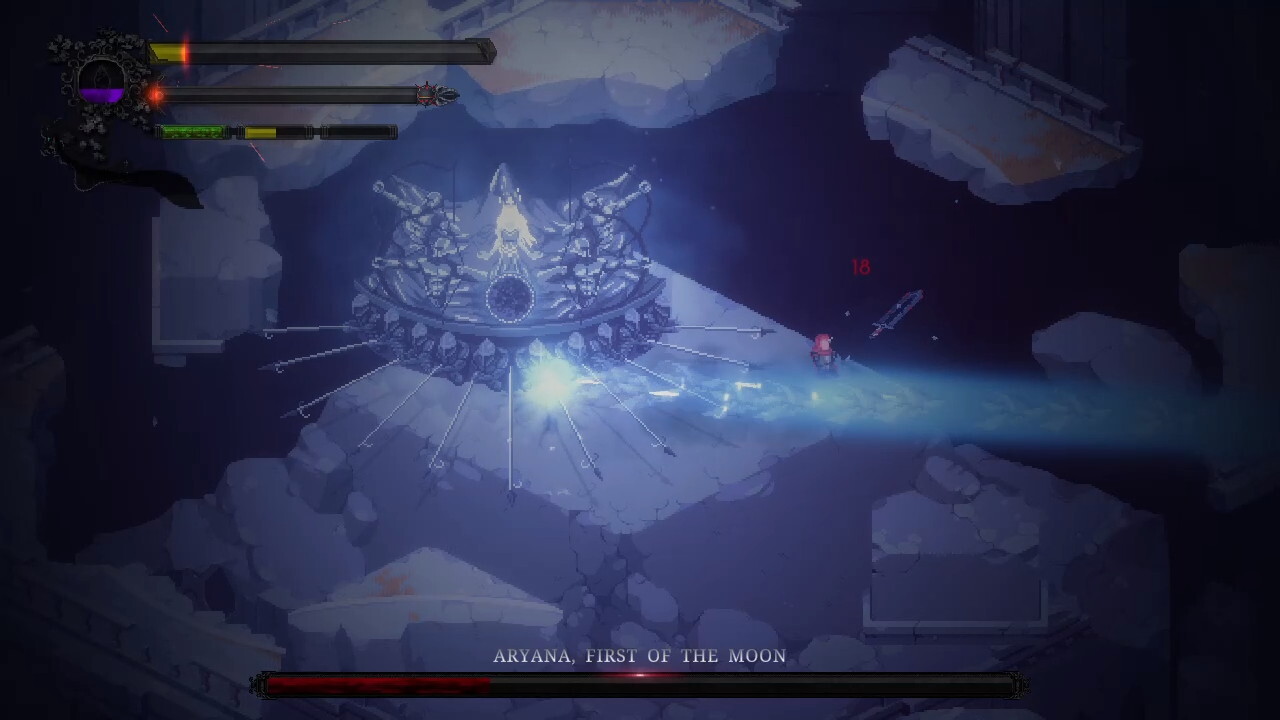 Chipping away at this first roadblock had the added effect of better acclimating me to Eldest Souls. You have a basic light attack, which does minimal damage and (defying expectations) comes out a bit slow. It’s more beneficial to charge your attack, which dashes you forward and does both more damage and quickens your swing for a limited time. Not only that, but in this Bloodthirst state you heal a percentage of the damage dealt. Learning when you can successfully charge and deal bigger damage is key to getting through these matches.

Being in that Bloodthirst state also lets you use a more powerful, single strike that depletes its timer immediately. Often you have to weigh your options on the fly, between chipping at them and healing up or getting your big hit in while you can. It’s intriguing once grasped, and complemented by three, varying offensive styles. These are rooted in greater damage, an extra movement option, and defensive counterattacks; and you’re never locked into one once you invest. This encourages experimentation and tweaking nodes along the skill tree, be it to better define your own style or to best suit a particular boss.

That’s nothing quite new, and it’s instead the Shard system that gives Eldest Soul a life all its own. Every god slain grants you a fragment embodying their essence. You can then slot this in to grant a unique attack on its own cooldown, add extra effects to your more standard attacks and movement, or to further tweak your chosen combat style. Not only is it all keeping with thematics (that fire and water boss I’d beaten granted effects based on that dual nature, for example) but it adds tons of customization and replayability potential if you want to infuse every possible combination. Not only that, but it plays a part in making you notably stronger after every success. 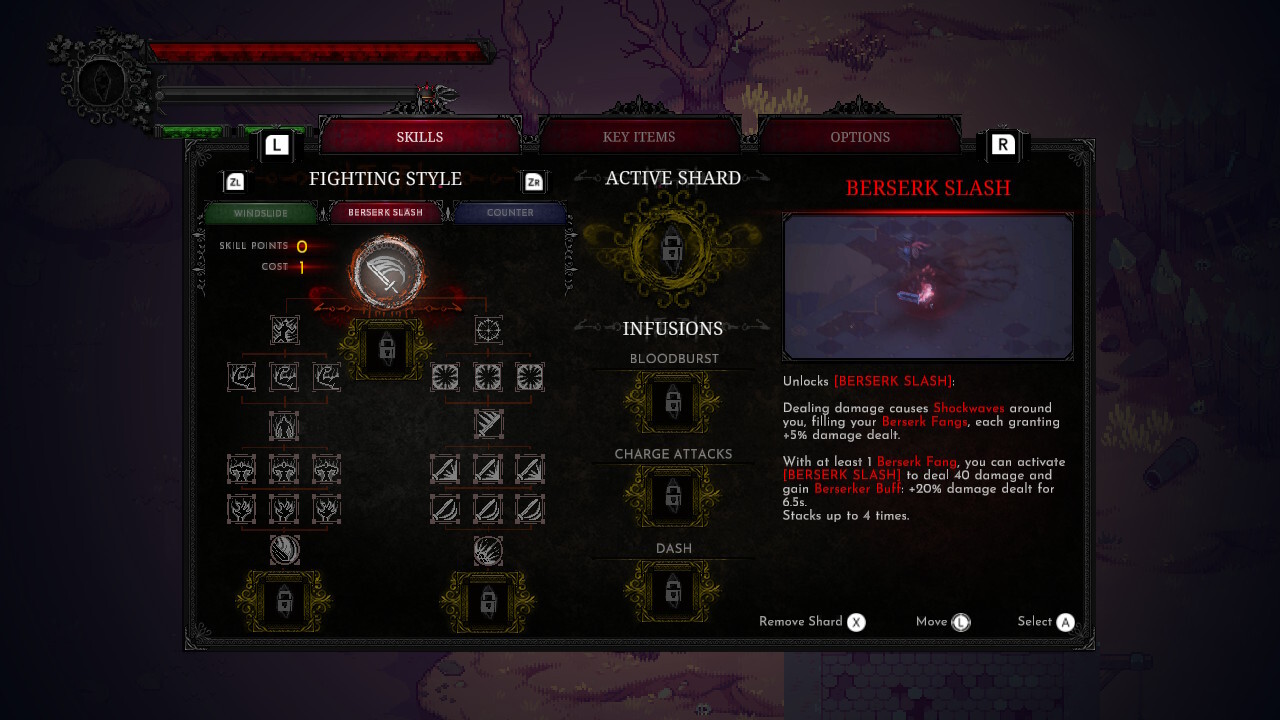 This sort of player-based tailoring of your own arsenal (and just how much of it there is) was my favorite thing about Eldest Souls, whose pieces nearly all work together. The few that didn’t were the nature of its exploration and sidequests.

Combing the overworld is a bit of a chore, with movement being limited to your naturally slow pace and finite, recharging dashes. Having these as restrictions during combat is deliberate, but for seeking out secrets or trying to retrace your steps it can feel arduous. There are fast-travel waypoints, but even then you’re relegated to trodding along by default to get to your intended destination. 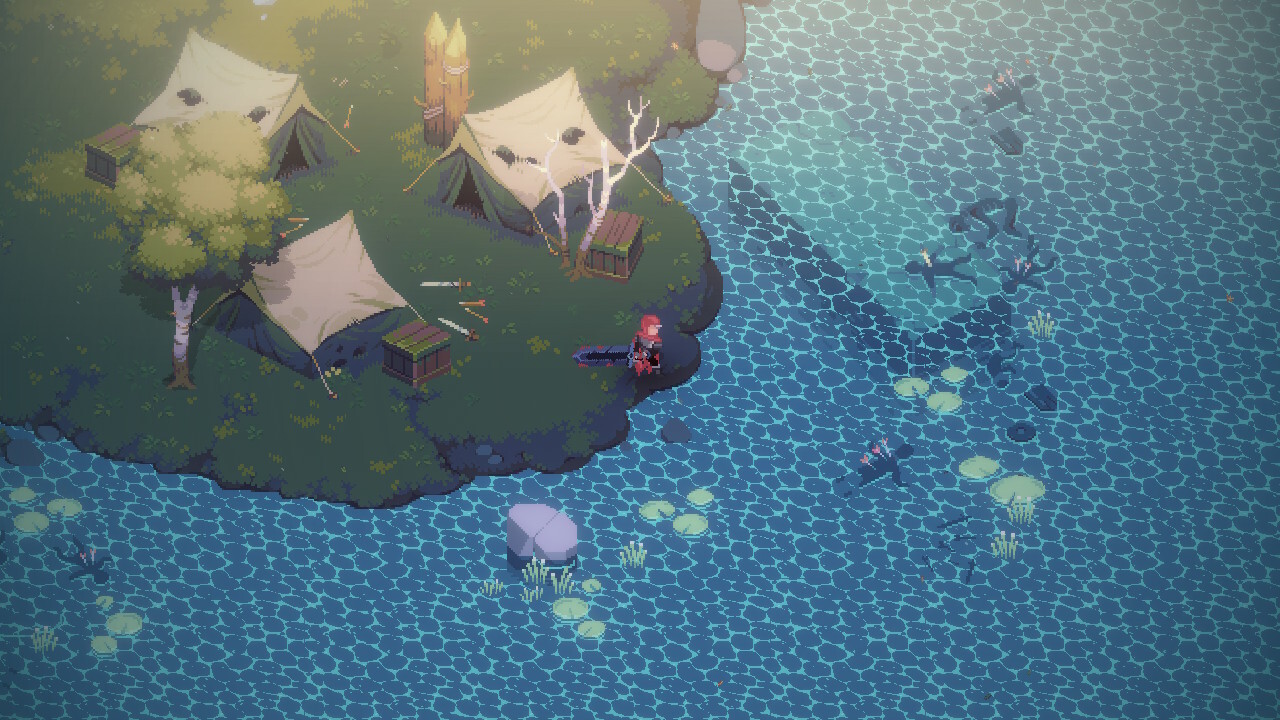 Intentional a choice it may be, I’m also not so personally into just how cryptic some characters and corners of the game are. For fairness’ sake, I say the same thing about the very games that inspired Eldest Souls, so if you’re into that approach to world building (and there is definitely a good deal of that here) then you may be right at home.

That never got in the way of my enjoyment of the game’s atmosphere or gameplay, though. Instead I was driven to seek out every boss I could and to play my way until I could make it work, just like my first dalliance with deicide. It took a great deal of self-inflicted toil to get to where I was able to dash circles around some bosses, but all that suffering was worth it. 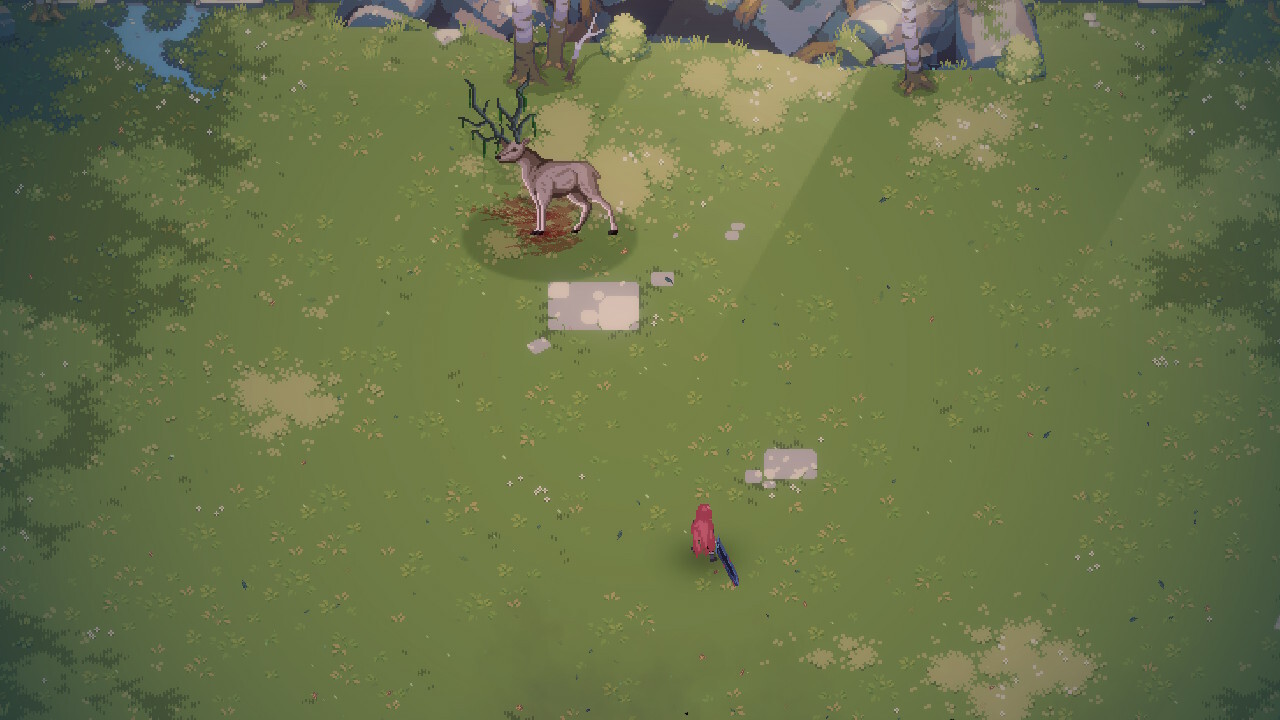 Put another way, Eldest Souls held me down and kicked my teeth in until I said thank you. If you’re after a difficult experience with gorgeous retro stylings and a firm understanding of more modern action sensibilities, as well as a generous amount of combat customization, you’ve found it. 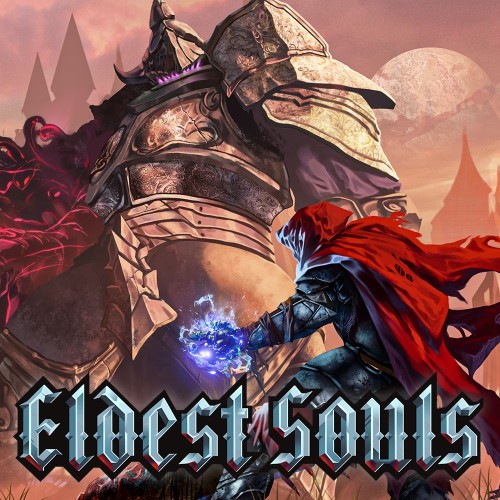