Sometimes, all you need to sell someone on something is one sentence, or even one phrase. Tell a college kid a meeting has free food? They’ll be there. Tell a cinephile this movie’s by their favorite director? They’ll watch it. Tell me that a game is an Earthbound-ish action-adventure game with beautiful, jaw-dropping pixel art? Well, sign me up on the spot – which is exactly how I responded to the announcement of Eastward, a colorful kinda-RPG with that exact selling point. How could I not love it?

Well… unfortunately, after heading far Eastward, the journey is much more of a mixed bag than I hoped. While living up to its initial visual promise, and having a stunningly solid gameplay system, Eastward fails to ever really get going, bogged down by a poorly structured plot, too many characters, and utterly sluggish pacing. 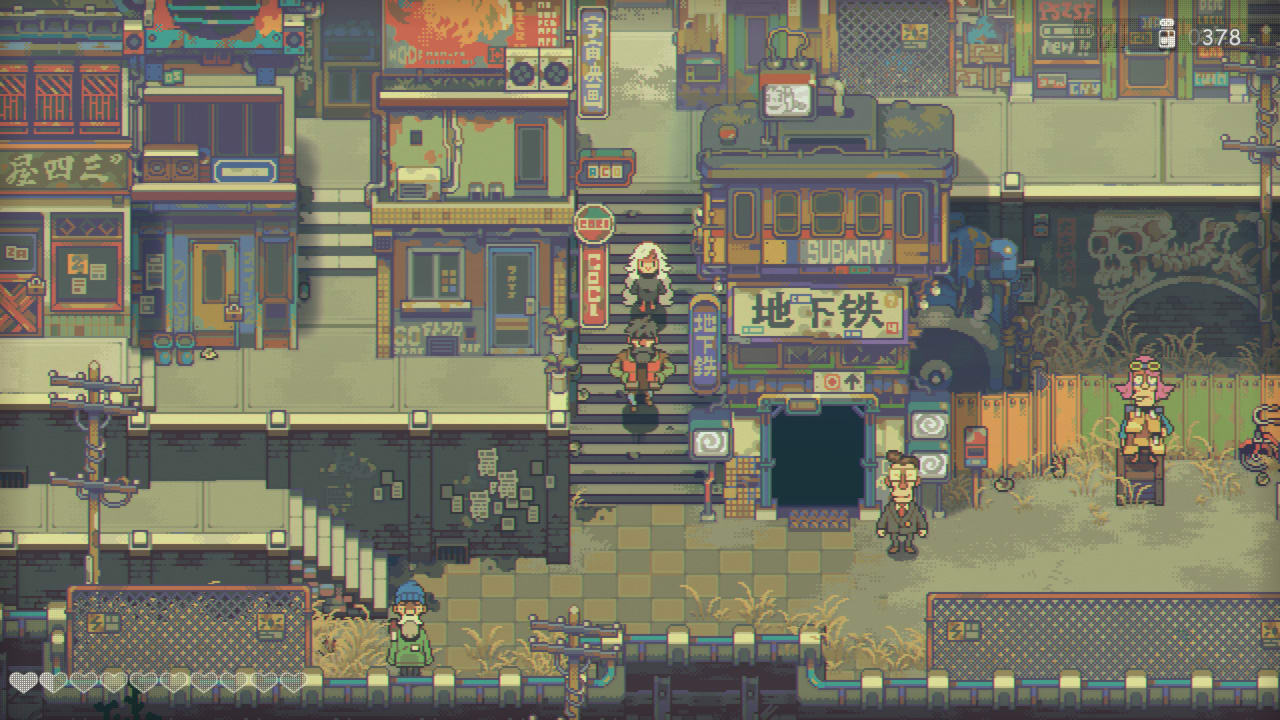 To even describe Eastward’s is deceptively difficult. You play as John, a silent, scruffy miner working in the underground of Potcrock Isle. He looks after Sam, a rambunctious and adorable girl who, despite the protests of the local denizens, claims that there’s life and beauty. After a number of mishaps, John and Sam both end up exiled to the outside world, heading on a train eastward towards… what, exactly?

As mentioned, much of Eastward’s plot is frustratingly constructed, largely in the lack of any character motivation for the first half of the game. The first couple of chapters underground just have John and Sam living day to day without a specific goal, and upon leaving the underground they just kind of… meander onward. By the time there are more concrete players in the overall plot and Things Happening, you can’t help but wonder why you’re doing any of it in the first place. Instead of being driven to travel onward, it feels like you’re pulled by the nose from one incidental plot point to the next. And while the game could have spinned something episodic out of it, truly focusing on the journey rather than the destination, it instead feels like an unfocused narrative. 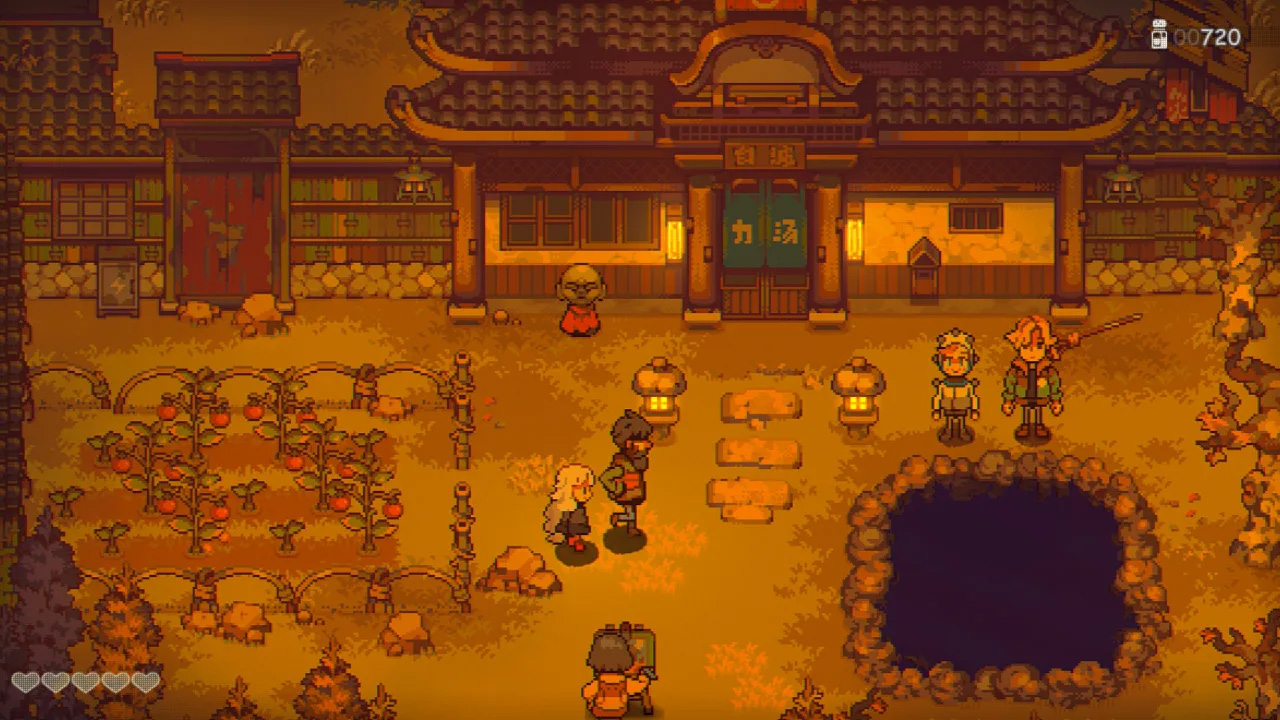 While that’s damning enough, the true detriment just comes with how slow the story progresses. There are dozens of minor characters who all have to chime in, and only a small handful of personalities to go between them. The first couple chapters underground in particular felt agonizingly slow, and while it gets marginally better after that, the number of occasions where I felt a scene wasn’t being overly dwelt upon was slim. Complaining about the slowness of RPGs is a stock critique, I’m aware, but you have to understand that I’m usually someone who never suffers from Goopy Goblin Gamer Brain. One of my favorite games ever is Persona 4, one that infamously takes several hours for you to get to any real significant gameplay. As long as the story is interesting and the writing is sharp or quirky, I can put up with hourlong diversions. But this just felt slow and tedious.

Until you get to the actual gameplay segments, which… are honestly fantastic. Eastward acts as a unique fusion of 2D Zelda and the Mario & Luigi games, where you swap between John and Sam to fight enemies and clear puzzles. What really makes the gameplay pop is their vastly different skillsets – John has a vast arsenal, but works in close range and has limited ammo for his meatier weapons. Sam, meanwhile, has a ranged attack with easily recharged ammo, but can’t actually do damage to the vast majority of enemies. Swapping between the two is effortless, and learning to do so effectively – especially as you acquire upgrades – makes for a very satisfying curve, and the game also balances the puzzles and more action-y elements well. In fact, for all the shellacking I gave the game’s story pacing, the pacing of dungeons is very finely tuned, and they introduce mechanics consistently to spice things up and have variety. In terms of pure combat, it might be the most fun 2D Zelda-style game I’ve played. It’s incredible. 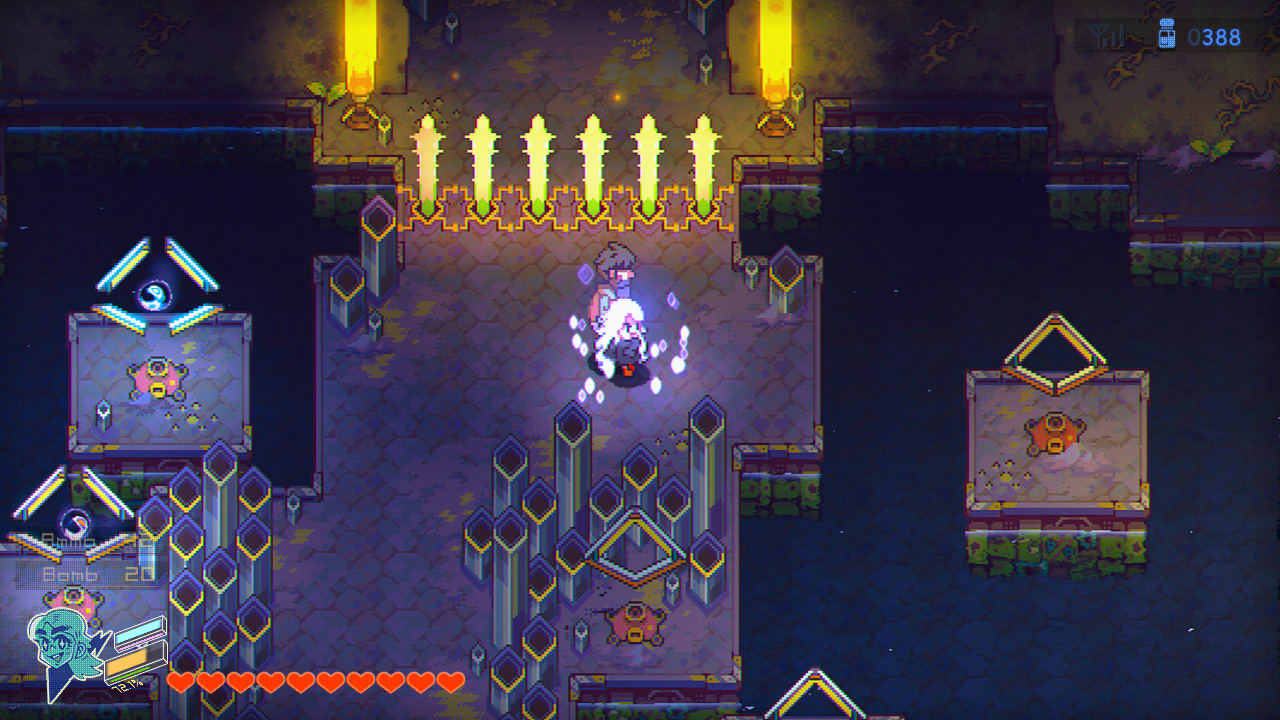 And the dungeons don’t just play nice, they look nice. In fact, the whole dang game is jaw-droppingly gorgeous. The amount of detailed pixel art surpasses just about anything else I’ve ever seen – no two town environments look remotely the same, and it’s so aesthetically pleasing that I wish I could print them out and slap them on my wall. Coupled with gorgeous lighting, a huge variety of character designs, and the sheer density of it all, the game is about as perfect visually as it can muster.

It even manages to channel all of its RPG bones into a huge game within a game, Earth Born, which, despite the extremely obvious name, is a Dragon Quest pastiche. Yes, there’s an entire other RPG within this quasi-RPG. While I didn’t play it too much (it suffers from the same dialogue excess as the rest of the game and was also fatally bugged until a recent patch), its sheer existence alone is impressive, and a decent diversion if you need a distraction.

The other large swaths of the game I haven’t yet mentioned are almost all positive. The soundtrack is solid, with a couple of tunes that easily get in your head. While a lot of the story does feel kinda cliche in certain ways, there were a couple portions that I found legitimately charming (such as Monkollywood, a filler chapter in a monkey movie studio). Sam, the character with the MOST dialogue, was easily the one I loved most – she’s legitimately cute and endearing, and even John has a moment or two of expression (though in general I really wish he had more personality or just wasn’t silent at all). In many ways, it’s a good game. In several, a great game. And in a couple? Top of the line. 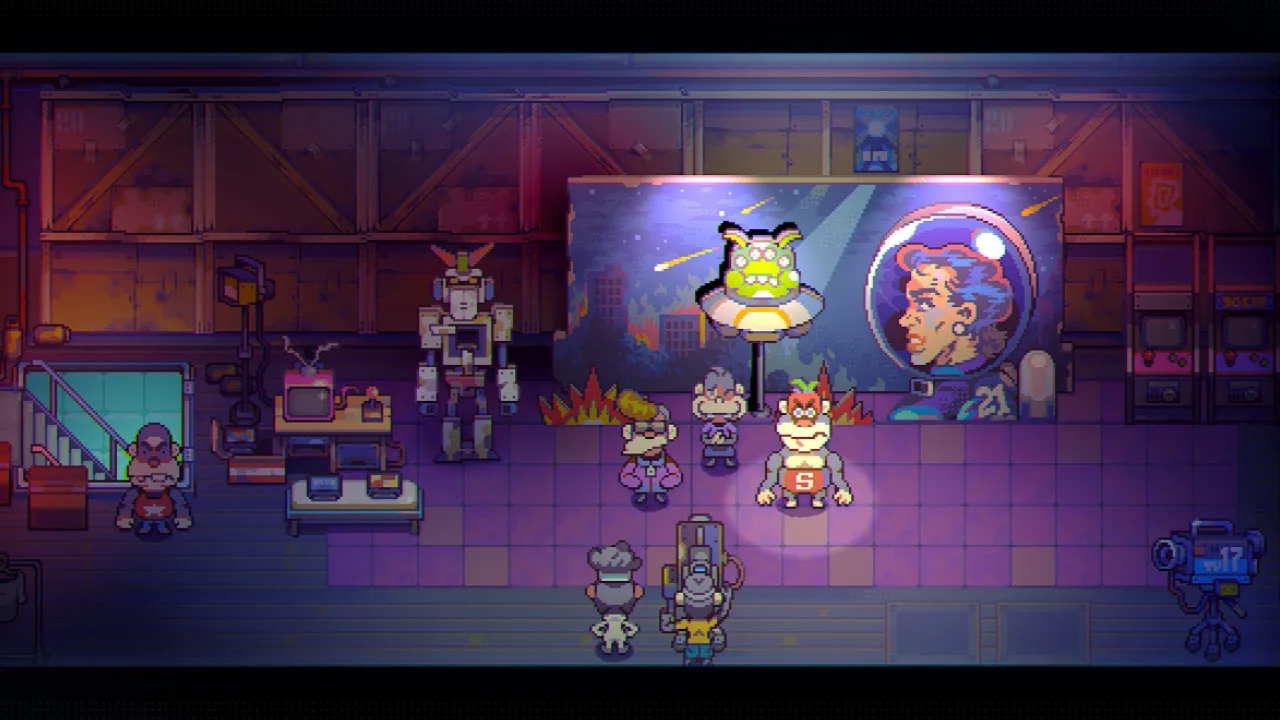 But the game’s pernicious qualities are hard to shake. The writing is really what makes or breaks a game like this, and it suffers greatly in more respects I have yet to mention. Tonally, the game appears to be a cute, kid-friendly affair, but there’s the very occasional inclusion of adult elements (like sex mentions or very… booby character animations) that always throwed me off, neither bawdy enough to be funny nor grounded enough to be dramatic. While there does end up being a core cast by the end, their arcs are inconsistent, and the explanation of certain plot elements varies between over- and under-explained. The ending both resolves very little but also wraps up the central conflict fairly well. It’s… a strange beast.

I don’t like to cite Earthbound too much when examining the pantheon of quirky indie RPGs that are clearly inspired by it, but this game references it (and also the Mother series in general) to a nigh-excessive point. Nothing wrong with homage, but drawing parallels only highlights Eastward’s own shortcomings. Earthbound, for not being a plot-focused game so much as a vibe-focused one, at least understood that it needed an ultimate goal, and that it would draw you into its world with NPCs who only had to steal the spotlight with one or two absurd lines of dialogue. Eastward attempts to get you to care for its vast population just by giving them an absurd amount of screentime, and not a lot of charisma to go around.

But comparing any game to my literal favorite game ever is never going to be fair, and Eastward, as stated, gets a lot right. When I was in dungeons, being taken along through simple puzzles and exciting setpieces, I was having an absolute blast. But whenever the plot kicked in, everything felt like it dragged to a halt. Even though it only took me about a week to play through, it felt three times as long. 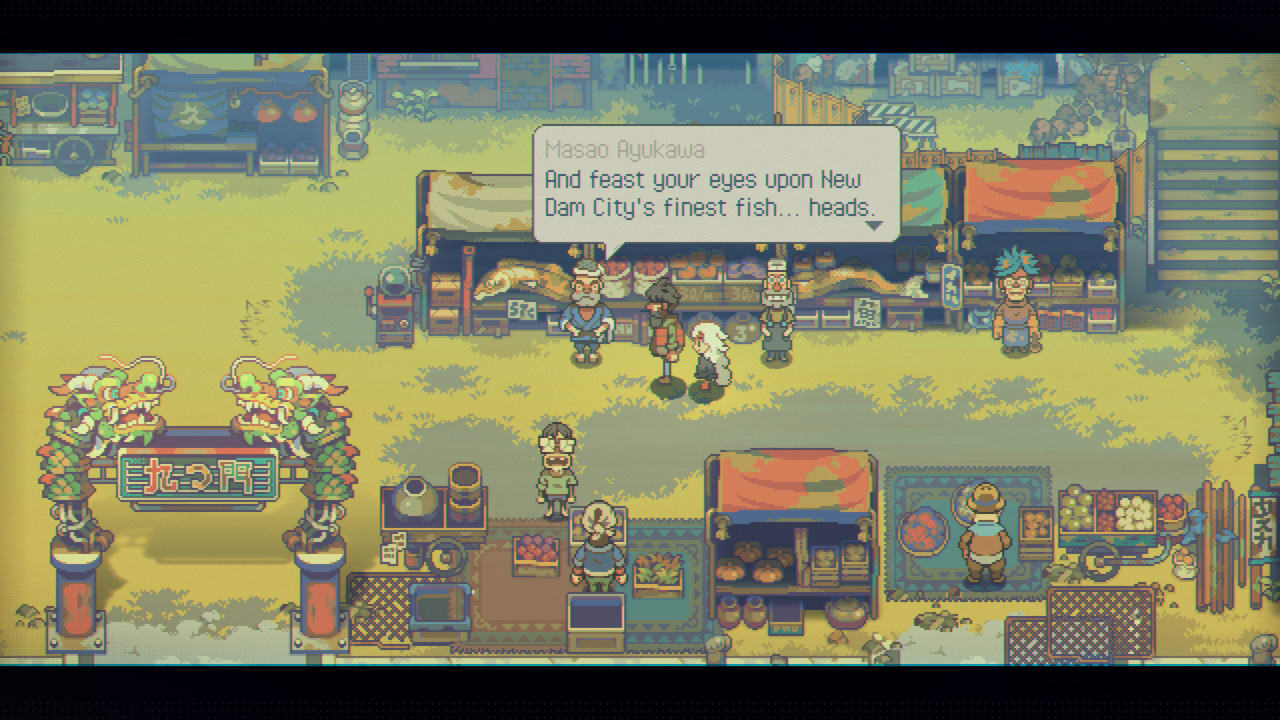 This is an impossible game to rate on a numbered scale. The score below ultimately reflects an arbitrary placement, one that makes the game seem merely middling when it’s really like a full-course meal that was delicious but an absolute pain to work through. Eastward is far from the YIIK class of terrible “Earthboundlike” games, and certainly deserves more attention than that mess. If you have a lot of patience, this is an easy recommendation. And if you have none, I would stay far away. I’m not sure if I’ll ever head Eastward again, but the journey will always remain fresh in my mind. 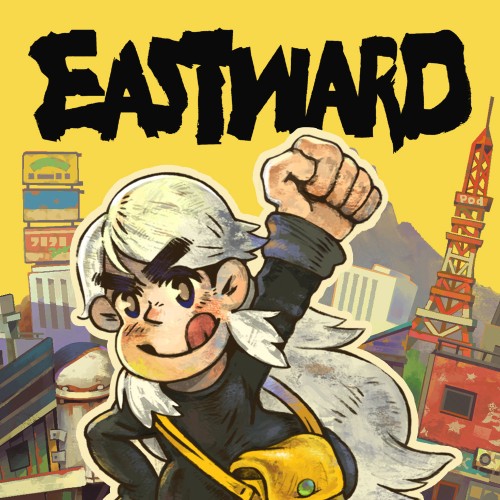