Another Dragon Quest spinoff is about to make the Nintendo Switch its home, and this time around it’s starring everyone’s favorite thief from Dragon Quest XI, Erik, along with his sister Mia. Set in a time before the events of Dragon Quest XI, Dragon Quest Treasures starts with a young Erik and Mia escaping the viking longship that they were raised on, only to be transported to the treasure-packed world of Draconia. The world of Draconia is a handful of islands, and these islands are all that is left of the corpses of two ancient golden dragons. In true Dragon Quest fashion this means that almost every named location in Draconia is a pun derived from the various body parts of these dragons, something that entertained me to no end while I played the game.

Shortly after arriving in Draconia, Erik and Mia form a treasure-hunting crew with the help of some local monsters, and the adventure truly begins. Your main goal in Dragon Quest Treasures, if you haven’t guessed yet, is to gather as much treasure from the islands as possible, increasing the value of your crew’s horde of treasure as you do so. You’ll meet a few friends and plenty of enemies along the way, as rival treasure hunters will both show you the ropes as well as aim to take just about any treasure they can get their hands on, including yours. 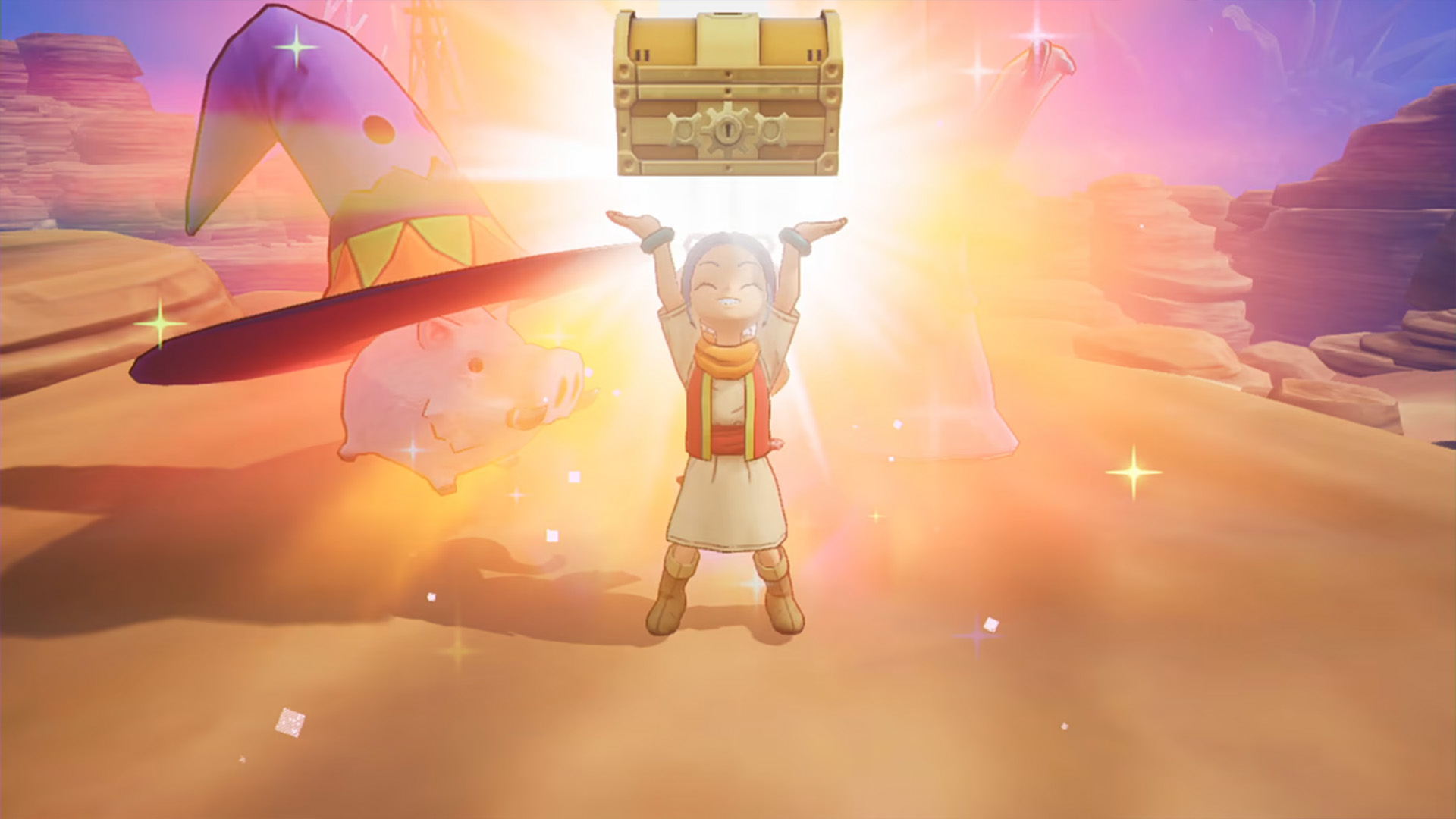 Your treasure-hunting crew, at its core, will be made up of Erik and Mia, but those two alone won’t cut it when it comes to hitting big. A huge part of Dragon Quest Treasures will be recruiting monsters to work with you, since they can sense where treasure is buried and help show you where it is. Different types of monsters also have different Fortes, something that they excel at that will help Erik and Mia traverse the landscape. Slimes can bounce you much higher than you can jump normally, flying monsters like Drackys can glide you down from great heights or across gaps, and you can ride atop monsters like Sabrecats to sprint much faster than you can normally walk. There are a couple other Fortes to be discovered as well, and I really enjoyed finding out what each of them was as I recruited new monsters.

The monsters also fill another pretty big role in Dragon Quest Treasures, and that’s combat. Unlike other Dragon Quest-series games, combat in Dragon Quest Treasures is not turn-based, instead you’ll find yourself freely fighting and avoiding enemies in real-time. Erik and Mia, being children in this game, don’t exactly pack a huge combative punch, so you’ll be relying on your monster pals to do most of the damage in fights. You are, of course, free to fight alongside them using your dagger, and it’s actually pretty fun when you do, though I wish the dagger combat felt just a bit tighter. It would be helpful if there was a way to lock on to enemies so that it wasn’t so easy to whiff the first strike in a combo and end up hitting nothing but air for a few seconds. If in-your-face fighting isn’t your style, Dragon Quest Treasures will actually let you be a little more hands-off when you fight, having you use your catapult (which is really just a slingshot) to hit enemies from afar with all kinds of ammo. Your catapult can also be used to shoot healing pellets at your monsters in the middle of a fight, and once your team is decently strong, it’s possible that you can hang back entirely and do nothing but support them for most fights you’ll get into. 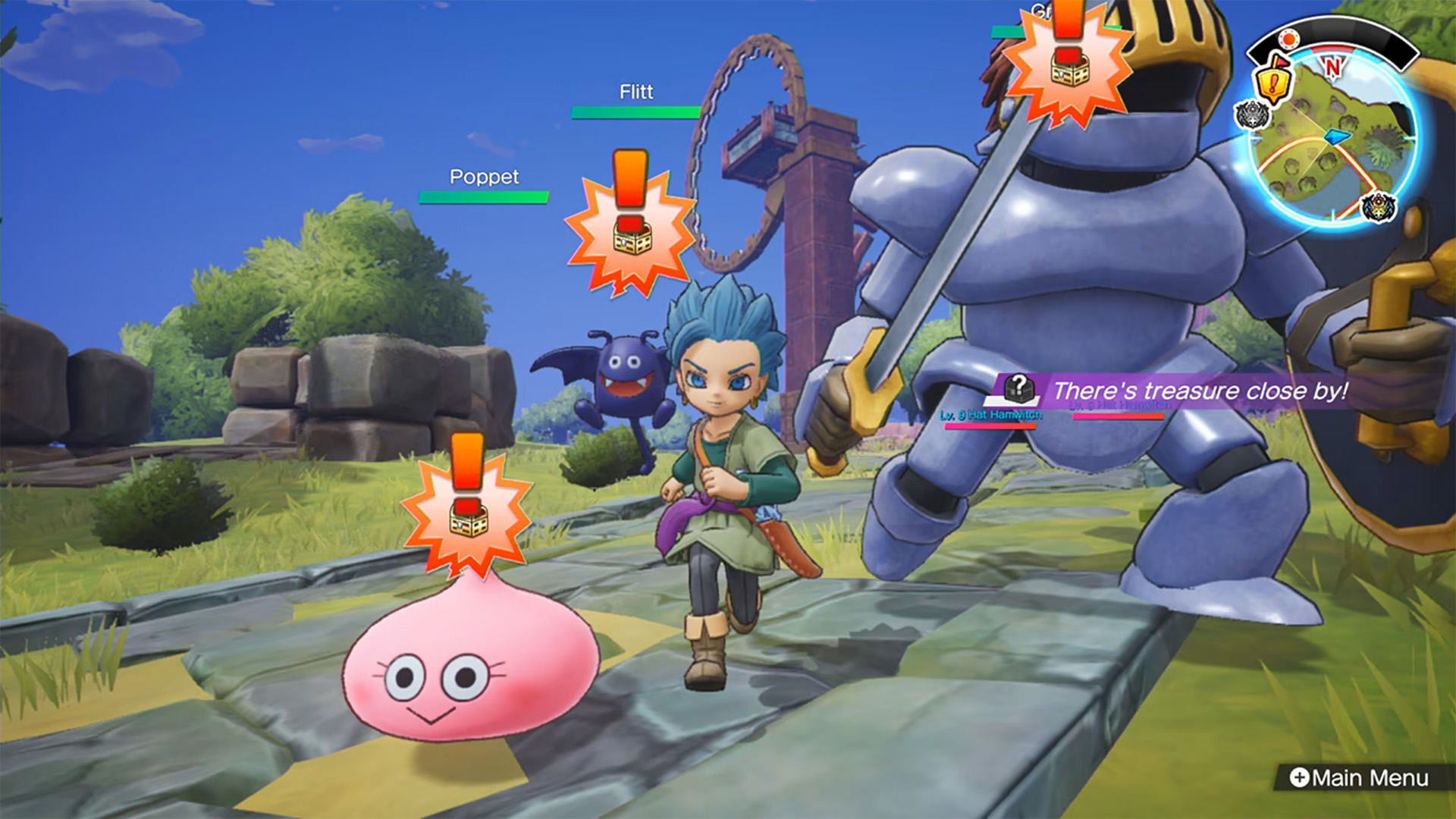 Now, fighting is fun and all, but treasure hunting is your main goal here, and Dragon Quest Treasures does it pretty well, letting you explore (and get sidetracked) on your own, but also helpfully pointing you in the right direction whenever you need it. As you explore the vast islands of Draconia, you can use the Fortune Finder action to let you know which direction the closest treasure is, and once you’re close to it, your monsters will let you know via a small treasure chest icon over their heads. Pulling up the Fortune Finder in the general vicinity of the treasure will grant Erik or Mia a vision from each monster in their party, allowing you to pinpoint the location of the treasure through the monster’s eyes. There is plenty of treasure to be had in this game, and my favorite part about it is that the majority of the valuable treasure you’ll find depicts characters, monsters, and items from all across the Dragon Quest franchise, including spinoff titles.

The treasure hunting loop can feel a bit monotonous at first – head out, grab treasure, bring it back to be appraised, rinse and repeat, with a few monster fights in between – but once you get rolling it is really fun not only to see which references to other games you’ll find, but also just to watch the value of your treasure vault grow; there’s just something about watching a big number get even bigger that’s very addictive. Bringing back huge bunches of loot all at once to watch the appraisal number jump ever higher is really what kept me coming back to this game over the last few days, and will likely keep me coming back long after this review is published.

To help add a breath of fresh air to this treasure hunting gameplay loop, you’re absolutely inundated with quests and sidequests to accomplish that will help move the main story and other side stories along and give you some pretty nice rewards to boot. Early on the amount of quests I suddenly had access to was actually fairly overwhelming, but I found that ignoring them for a bit and hunting for treasure really helped me get into a comfortable groove that allowed me to get my bearings. The quests themselves are usually nothing more than fetch-quests, but something about interacting with a lovable cast of characters full of Dragon Quest-charm made doing them feel worthwhile despite their simple nature. 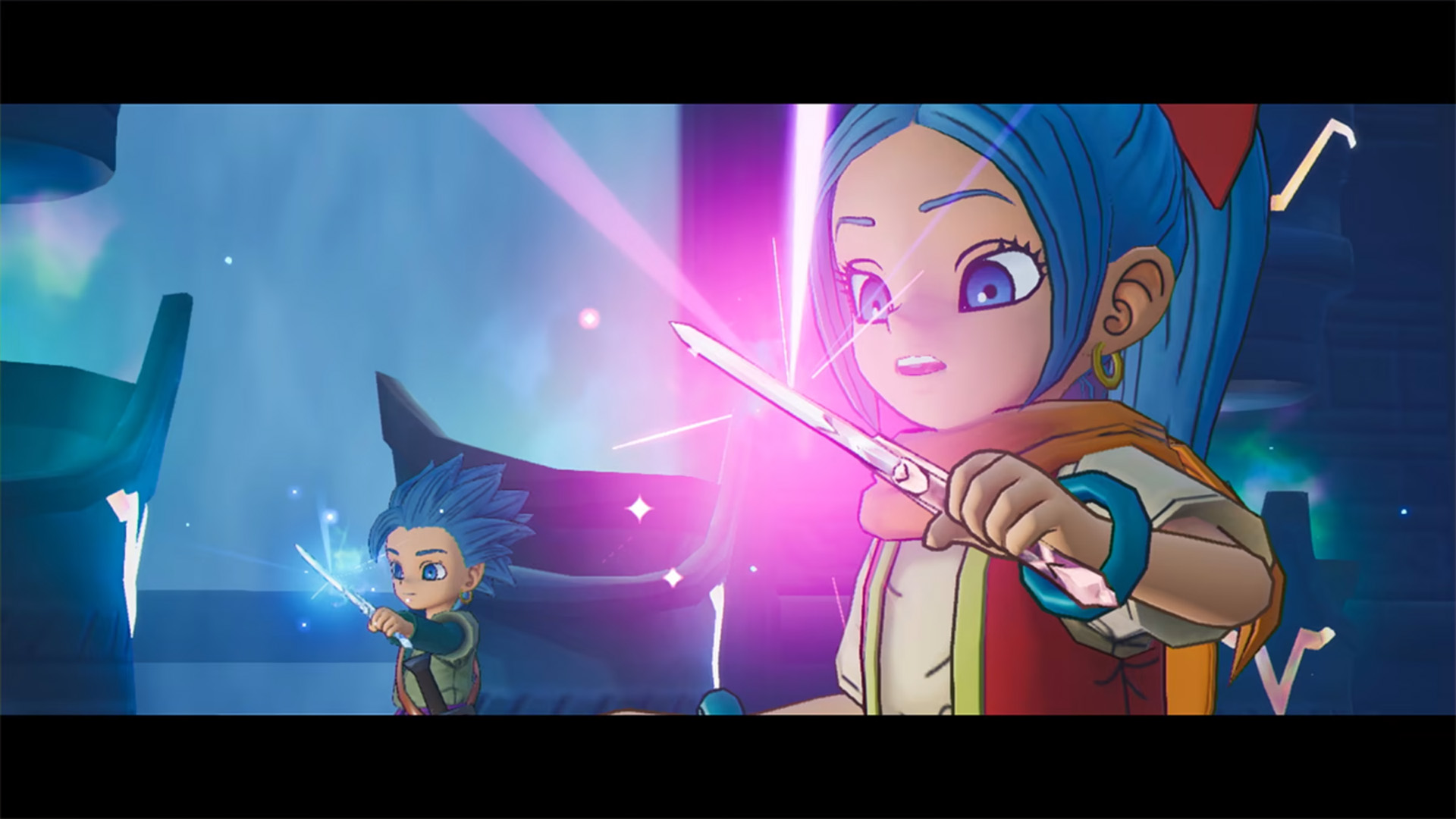 Speaking of charm, Dragon Quest Treasures doesn’t feature full voice acting, but there are plenty of voices to be heard here. Each character has a voice and will use it about as liberally as possible outside of literally every line being spoken, and the voice actors have clearly done some stellar work. Even each monster has a voice, and you’ll get plenty of chances to hear them. As great as the voice acting is, hearing the same four lines from each monster when it’s in your party can definitely get grating during a long play session. The monsters in your party literally never stop talking when you’re out adventuring, and a person can only hear a Slime say “I’m jelly happy” or “What slime is it?” so many times before the irritation sets in.

As far as performance goes, Dragon Quest Treasure runs smoothly on the Switch in both handheld and docked modes, though the performance tends to take a small hit if there’s a lot happening on-screen at once, though this was rare in my experience. The environment textures could also stand to look a little sharper, but honestly I wasn’t bothered by this as much as others might be. Loading times between islands are pretty short, all things considered, but loading back into the game when you start from the title screen or get a game over felt like it dragged on a bit too long each time it happened. 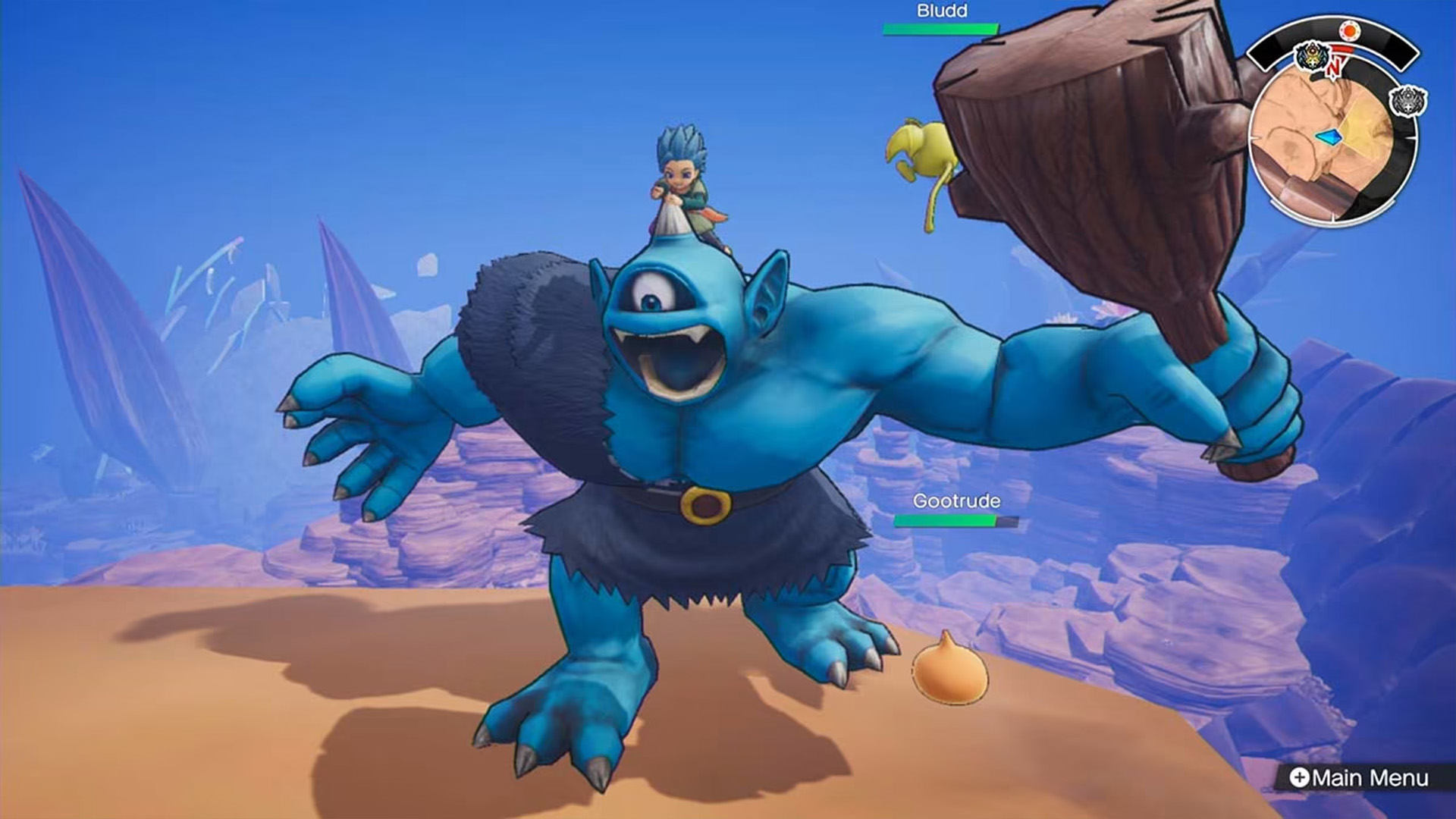 Dragon Quest Treasures is ultimately a pretty simple affair, but it doesn’t really need to be any more complex than it is, because it knows exactly what it wants to do and for the most part does a great job doing it. If you’re up for a change in the Dragon Quest formula and are looking to get your Dragon Quest fix before the eventual releases of the HD-2D remaster of Dragon Quest III or Dragon Quest XII then Dragon Quest Treasures should tide you over pretty well. Even if treasure hunting doesn’t seem up your alley, there is no shortage of that classic Dragon Quest charm here, so give it a shot and you just might find a treasure of your own. 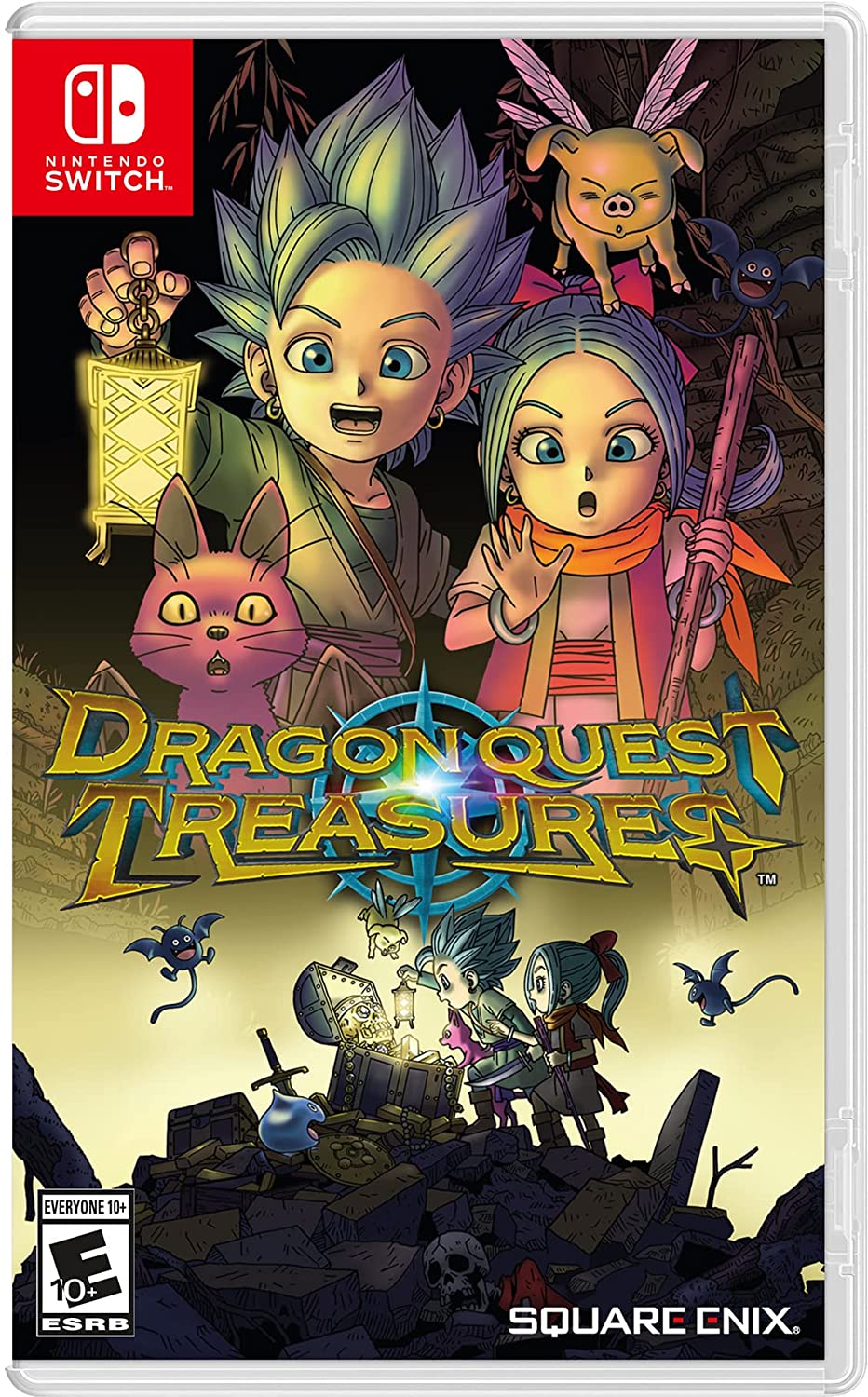