Retro revivals can be tough. There’s always the sense of needing to live up to and pay tribute to the source of inspiration, but too much fidelity can make it seem like you have nothing to offer. A couple years back I played through The Messenger, which sought to revisit ninja based action from the NES era. That game managed to impress with its time travel mechanics and subversive writing, but what happens when you play things straight?

Enter Cyber Shadow, a long time labor of love from Aarne Hunziker. Influenced by and evocative of Ninja Gaiden, Shatterhand, Castlevania, and more; it is a faithful send up to 8-bit action. From a gameplay perspective it doesn’t push boundaries, but instead makes them very rewarding and very pretty while aiming to deliver a stronger narrative focus than its progenitors. Read on to learn more about its technopocalypse, and whether you should take up its blade. 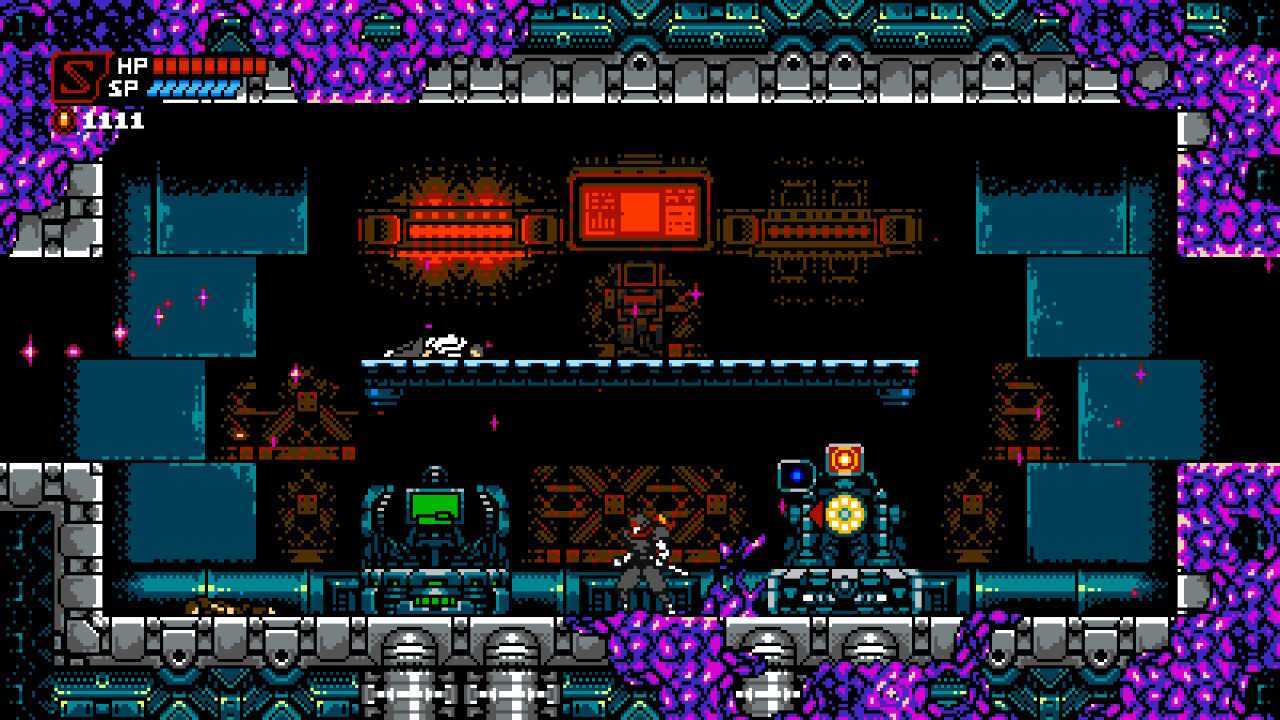 Cyber Shadow has you in control of Shadow, the last surviving member of a once prominent ninja clan. Taking place in a distant future, in a now destroyed Mekacity, your mechanized body is failing despite your spirit’s need to uncover what’s brought on the sorry state of things. You’ll do so over about ten stages worth of action platforming and plenty of boss fights, all in gorgeously animated and pixelated environments.

One other way 8-bit action games are emulated here is in the difficulty. Cyber Shadow was not an easy game, though this came in bursts. At times things would be smooth and linear sailing, with spikes at bosses. Other, particular stage sections would be too frustrating for their own good, though this could have occasionally been my doing – more on that a bit later.

My interest in playing Cyber Shadow followed a clear trajectory. When I started, I was drawn in by the appealing sprites and retro-familiar gameplay. Progressing through, those points began to wane as I neared the halfway point. Even as I gained more story information and powers, something continued to feel missing. Bosses continued to be challenging and interesting, but outside of those peaks the game ran the risk of losing me. 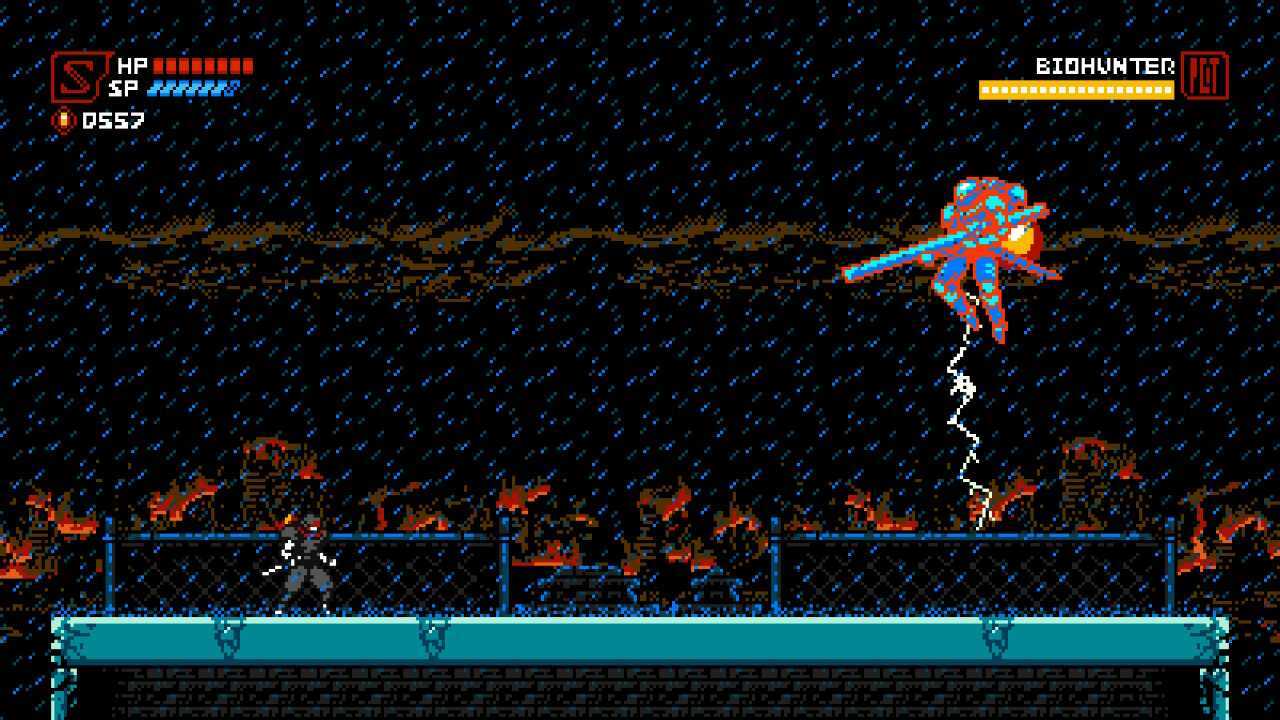 It took gaining a few late game techniques to make this game really come together. The first of these, the parry, completely changed how I approached and thought about fighting enemies in a fantastic way. If Street Fighter has taught me anything it’s that a parry system done right can be a game changer, and that was proven again in Cyber Shadow.

The other missing piece of the puzzle was a dash, or more specifically the attack that came with the dash. Cutting through enemies while an invulnerable blur is always satisfying, but being able to chain these slashes to mow down rows and cross gaps? That’s poetry in motion through many of these levels. 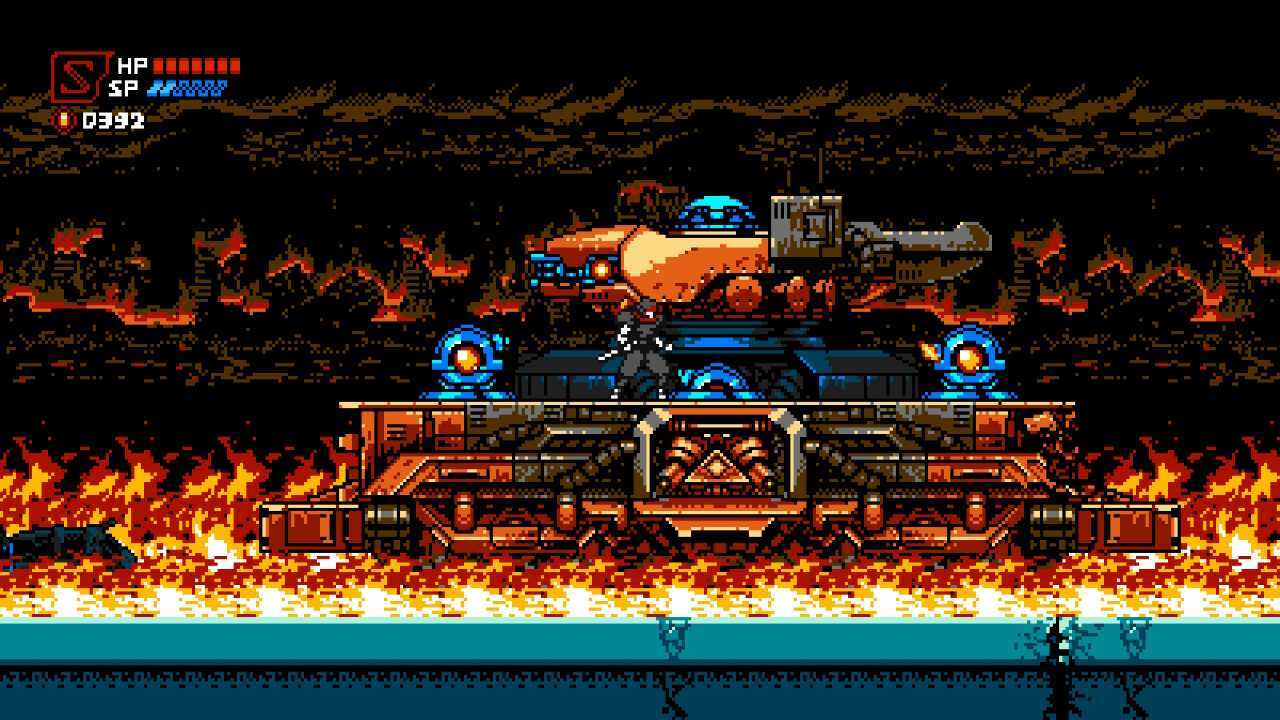 Once I had these, some design choices in early levels made a lot more sense. You’re able to revisit past locations in Cyber Shadow through certain terminals, letting you poke around for health and meter upgrades. To be clear, the game isn’t an exploration based one and it’s entirely possible to finish without backtracking. I’d equate it to some of the hidden power-ups in Mega Man games, just with a more linear structure around them.

Secrets of the Clan

Strong as its gameplay is on a fundamental level, particularly once you have all your tools, Cyber Shadow leans on its world and narrative delivery just as much. There are both sprite-based cinematic and in-game cutscenes, some with surprisingly striking visuals. The overt storytelling has enough to get its hooks into you, providing more context and revelations over time, but it’s the more subtle pieces that are sticking with me.

Themes of loss, revenge, loyalty, and the conflict between spirituality and technology course through the game’s mechanical veins. You’ll come across members of your clan trapped in stasis pods and ancient shrines defiled by time. One of my favorite chapters involved returning to an early game stage, now kitted out with more resources and skills. Utterly demolishing those familiar and previously more challenging enemies brought the story into the gameplay itself, something that’s always appreciated. 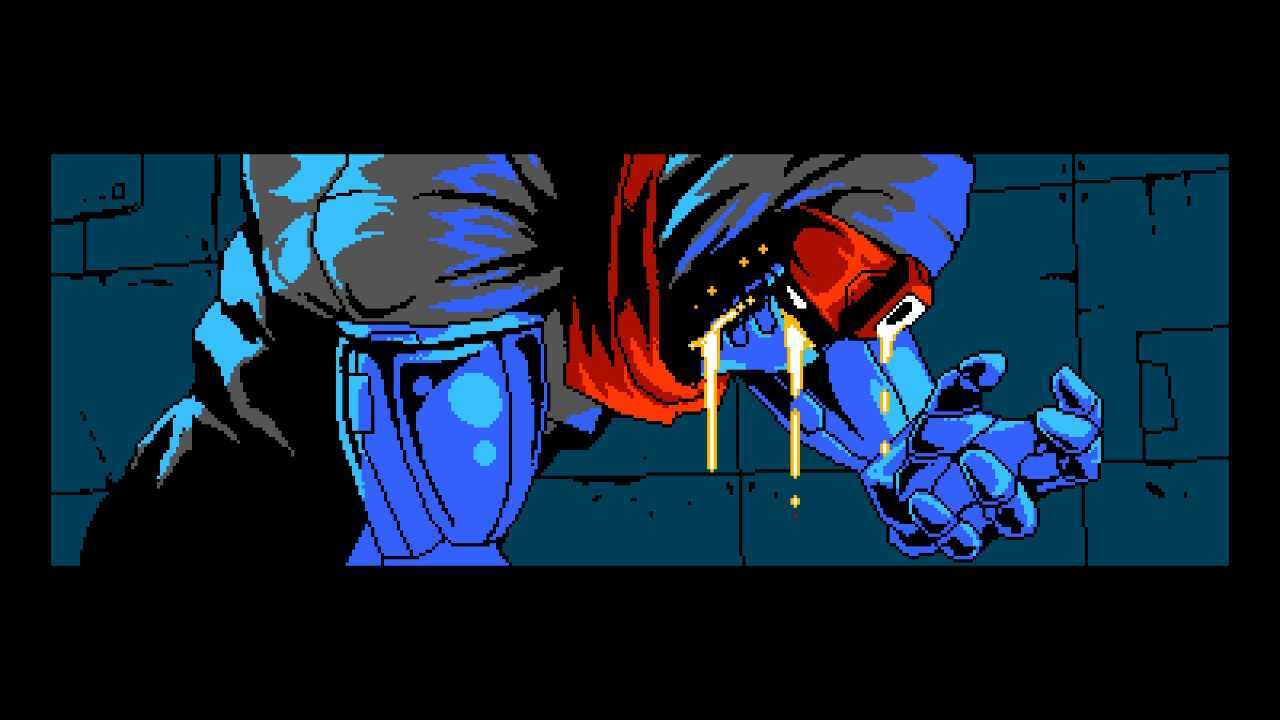 It’s possible to ninja-run through Cyber Shadow fairly quickly, though getting that skilled will take some practice. My first playthrough took about ten and a half hours and over 500 deaths, though thankfully there are multiple checkpoints in each stage. These markers are more than just respawn points though, as they are the key to setting how difficult your time will be.

As you play, you’ll gather up a resource/currency that lets you give checkpoints added functionality. Sometimes these heal you to full health by default, usually ahead of bosses, but if they don’t you can invest in the checkpoint to activate that feature. You’re able to do the same for your meter, and for findable assist items that are otherwise fairly rare.

I imagine I could’ve trimmed down both measures of my playthrough if I was more willing to use this feature, but I decided to challenge myself and not upgrade any checkpoints. It’s a similar idea to the breakable checkpoints in Shovel Knight, though the game didn’t reward me for being stubborn this time.

Speaking of Yacht Club Games, they’re on publishing duty for this one. That connection can be felt in some of the menus and the same dedication to retro inspirations. For Nintendo fans this also means some lite amiibo features! By scanning in one of the four Shovel Knight figures, you’ll unlock that Knight as a floating companion and can change your color palette to match them. It’s a nice extra for these Nindie figures, and together with the system’s portability make a case for the Switch being the best place to play this one. 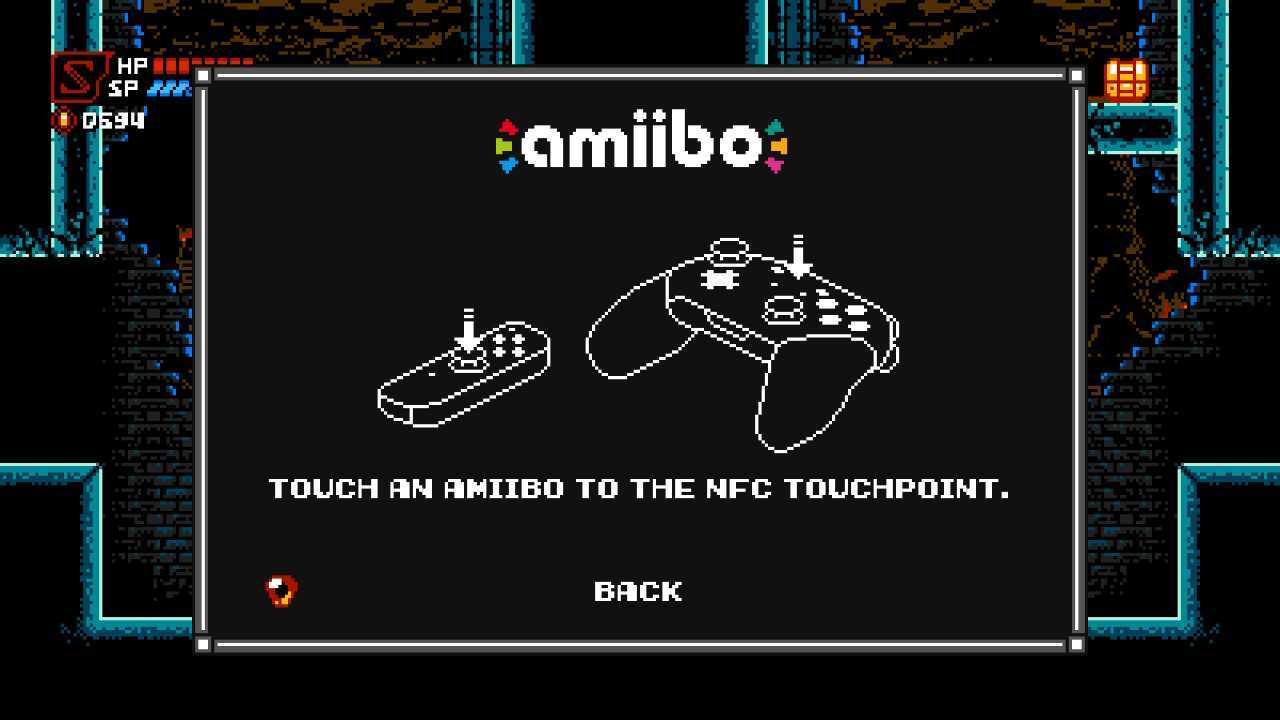 The time has come

Coming out the other side of Cyber Shadow, it’s a worthy successor and send up to those that came before. The narrative focus and more finely crafted presentation compliment that well, though ultimately it doesn’t feel like the game offers quite as much on the gameplay front.

This is a finely made game, to be sure, and is fun to play and control. It’s just that until the end it’s a lot of what I’ve played before. It may not be reinventing the wheel, but Cyber Shadow still makes a damn fine one. If you want a definitive example of 8-bit action, look no further. 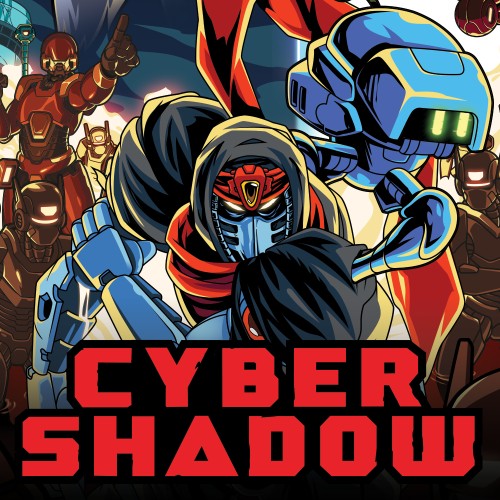