Sometimes it’s hard for me to believe that Crisis Core -Final Fantasy VII- released on the PSP 15 years ago. It’s also extremely difficult to believe that a game designed on a handheld console released in 2007 had the ability to tell such a complex story complete with FMVs, 3D environments, and voice acting. Yes, I know: this is a Nintendo website, but you have to give Square Enix credit for what it pulled off with the PSP. For its time, Crisis Core was one of the — if not the — best-looking handheld video games on the market, that transformed Final Fantasy VII’s Midgar into a beautiful 3D world, all on a portable. 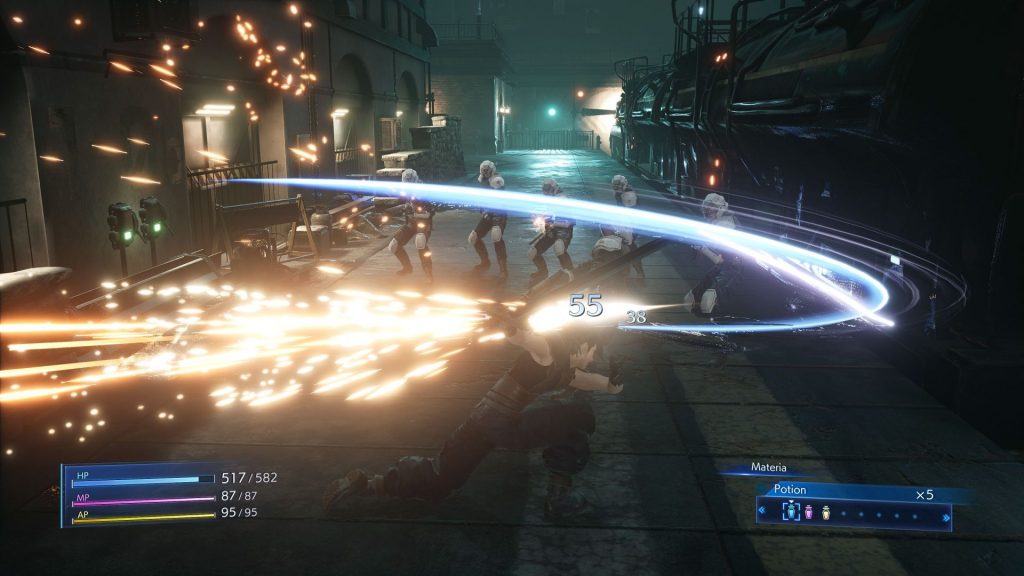 Now, here we are in 2022, the 25th anniversary of Final Fantasy VII, and Square Enix has finally reacted to the pleas of Final Fantasy fans around the world — it’s given Crisis Core the long overdue re-release it deserves. I can tell you, that over the past few years I have played a huge selection of re-released or enhanced games from the early 2000s, but I can say without a doubt that none have delivered this level of quality without explicitly being considered a full remake. While the locations, dialogue, and story are all the same, Crisis Core – Final Fantasy VII – Reunion delivers a new experience with extremely enhanced visuals, an enhanced battle system, a few new FMVs, and brand-new voice acting to reflect the cast from Final Fantasy VII Remake. 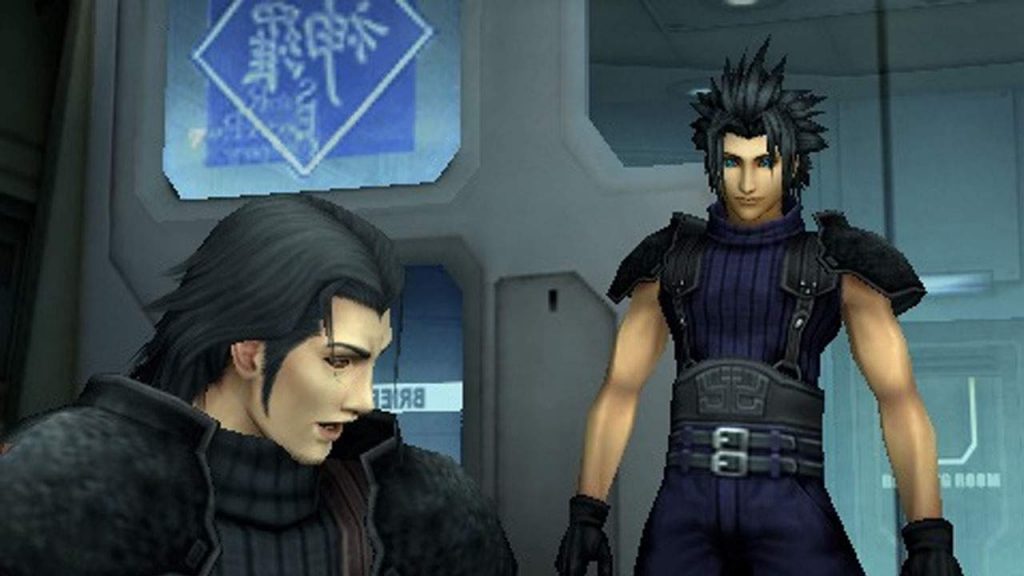 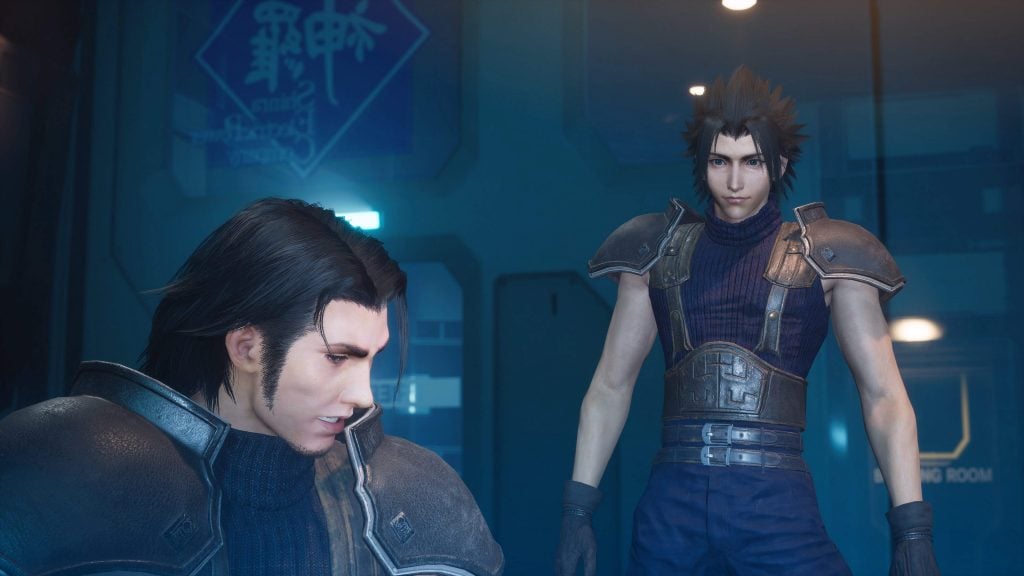 But what makes this game a bit odd is this hybrid remake/remaster approach that Square Enix took. One moment, Crisis Core Reunion looks like a brand-new AAA game, while other moments, especially in pre-rendered cut-scenes and a few in-engine scenes, you can start to see some of the PSP roots poking out. All that said, the final product exceeded my expectations in almost every way. Square Enix could have simply slapped a remaster sticker on the box, ran it through an emulator, and called it a day. But, instead, Reunion delivers the best quality re-release I’ve seen this generation.

For those of you unfamiliar with Crisis Core -Final Fantasy VII-, I’ll give you a brief overview of what you can expect. Reunion is a prequel to the hit 1997 PlayStation RPG, Final Fantasy VII and follows Zack Fair, a member of an elite military-esque organization known as SOLDIER. (He also happens to look a whole lot like Cloud.) Zack is a goofy and over-the-top optimist whose dream in life is to become a hero and protect his honor.

Zack was first seen in the original Final Fantasy VII, in a brief, but extremely memorable moment (that I won’t spoil here if you’ve never played the game). And while Reunion is a prequel, it’s really designed for players who have a good understanding of the events of Final Fantasy VII. It’s not absolutely necessary that you play the original first, but you’ll get more enjoyment out of the game if you took the original for a spin. For fans of VII, Crisis Core – Reunion features many familiar faces, including Cloud, Yuffie, Sephiroth, Aerith, and a few more (which, once again, I won’t list off and spoil here). 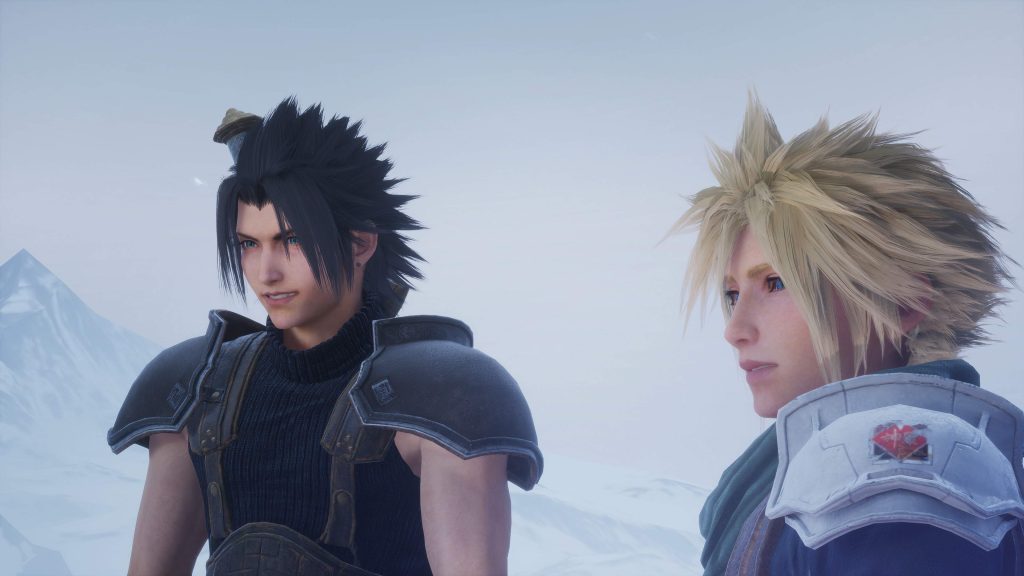 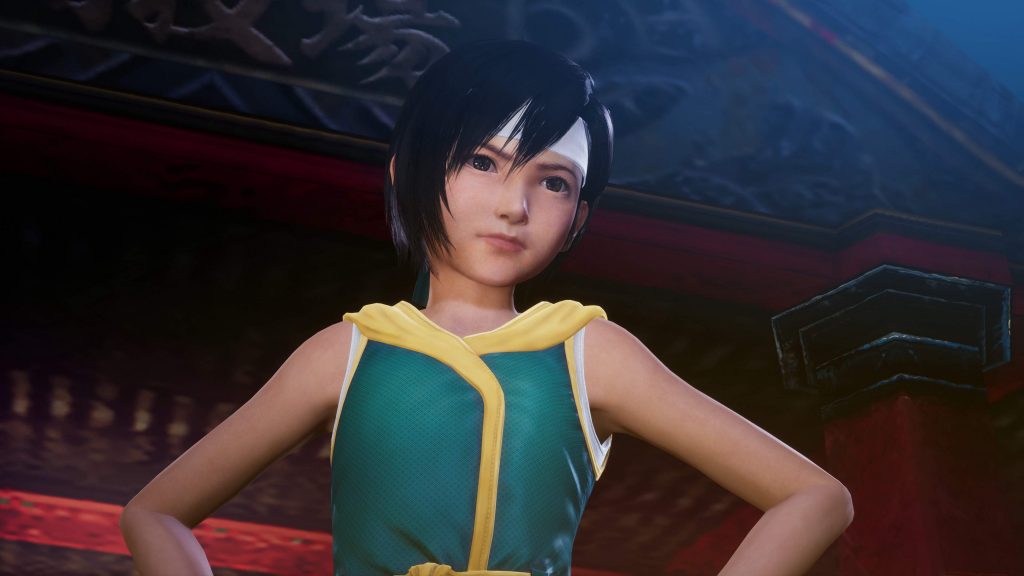 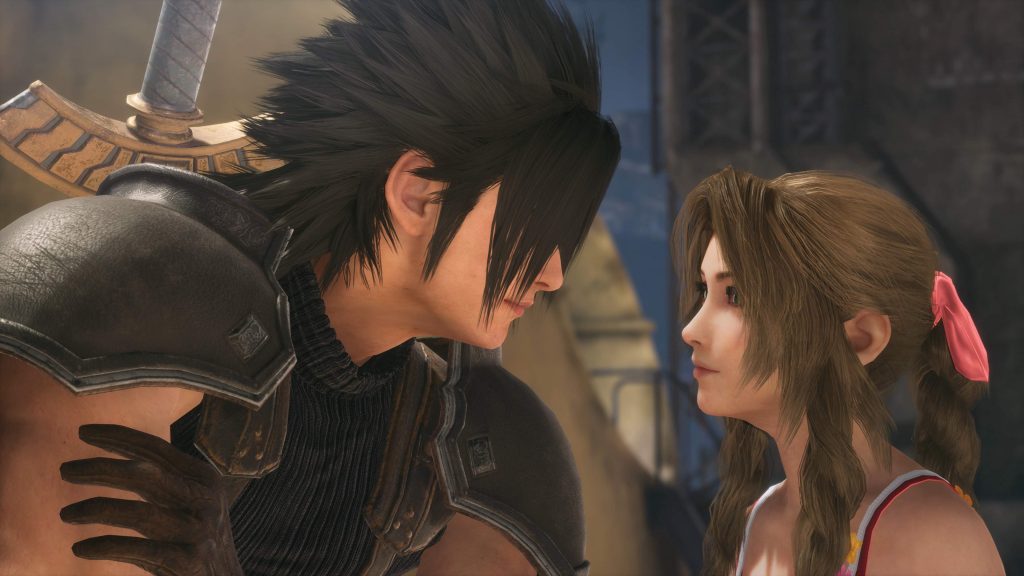 Now, at this point, I could probably go into more detail about the story — but I’m not going to. All I’m going to say is that there are moments in this game that truly stand out and are memorable and emotional. That being said, there are also a whole lot of moments that are confusing and convoluted. In fact, there are parts of this game that confused me so much, that I had to look them up to fully understand what was unfolding before my eyes (if you’re familiar with some of the complicated storylines of Kingdom Hearts, you probably have an idea of what you’re in store for.) But, overall, Crisis Core – Reunion still has a compelling story — even if parts of it are a little over the top.

The biggest positive takeaway here was watching a protagonist like Zack receive more attention — his character absolutely deserved to be fleshed out, and Crisis Core did that just beautifully.

As mentioned above, this review is based on my time with the PS5 version of the game. As soon as we get our hands on the Switch version, this section will be updated with our impressions of the game’s performance in both handheld and docked mode.

While Crisis Core -Final Fantasy VII- Reunion is a prequel to Final Fantasy VII, the two combat systems couldn’t be more different. Instead of the classic turn-based battles that you would expect from a classic FF adventure, Crisis Core opts for a real-time system that gives you significantly more control over your character, while still keeping some traditional RPG elements like random encounters and magic (Materia) management. 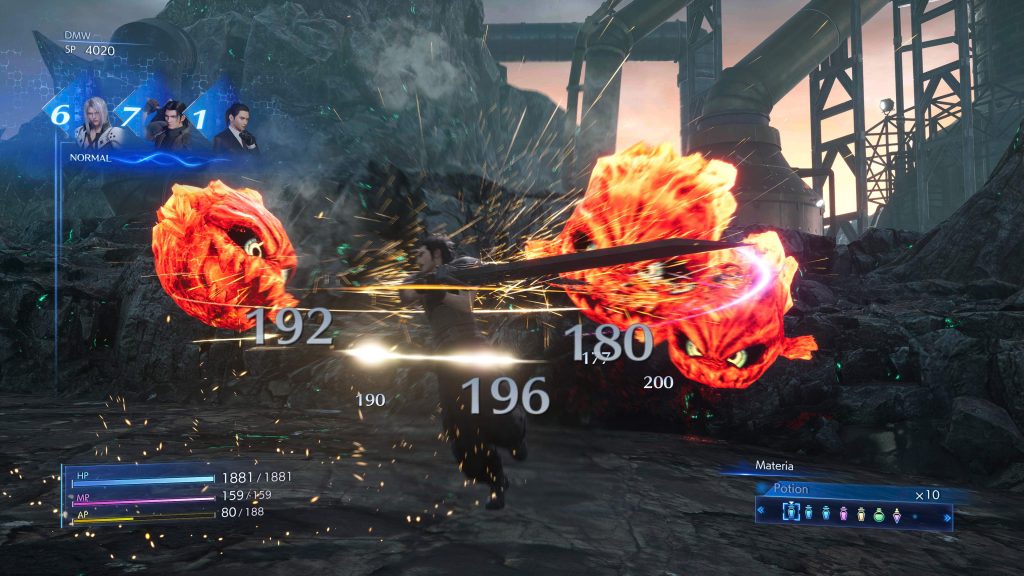 Crisis Core’s Combat Mode also contains a slot machine-like mechanic called the DMW (Digital Mind Wave) that lives at the top of the screen throughout your battle and will constantly spin through pictures of characters or summons that you meet throughout your journey. If three characters line up in a row, you can unleash a powerful limit break that’s associated with the character that appears in the DMW. For example, Cloud or Sephiroth on the DMW will have Zack perform strong sword attacks, while spinning Aerith will heal you and replenish your MP. Depending on the situation, you may see more or less of a character appear on the DMW. If Zack just talked with Aerith and has her on his mind, his heightened emotions will make her appear more often on the spinner. While you can’t really control who will pop up and when, it’s kind of neat to see Zack’s emotions and thoughts reflected in the Limit Breaks he performs. 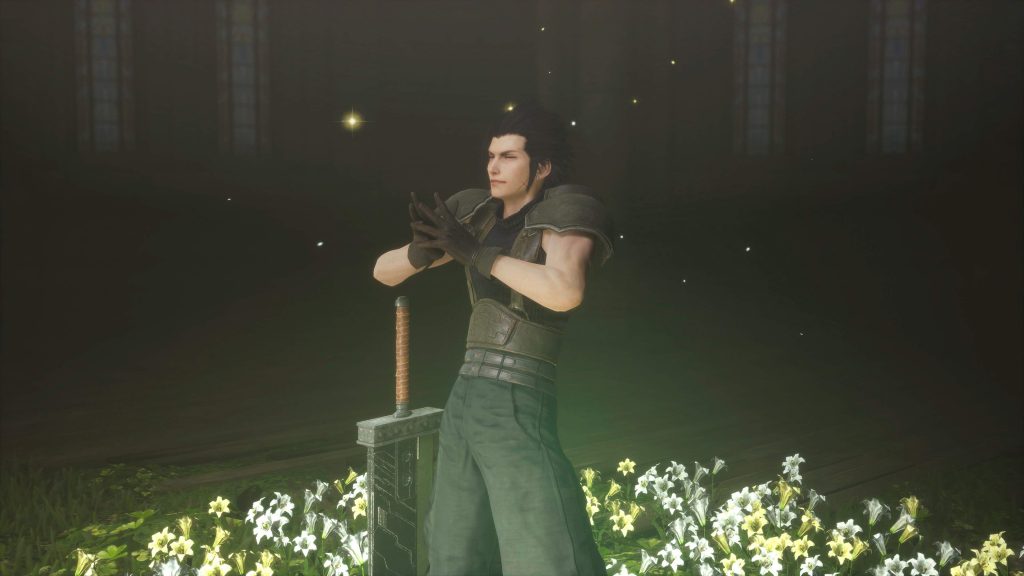 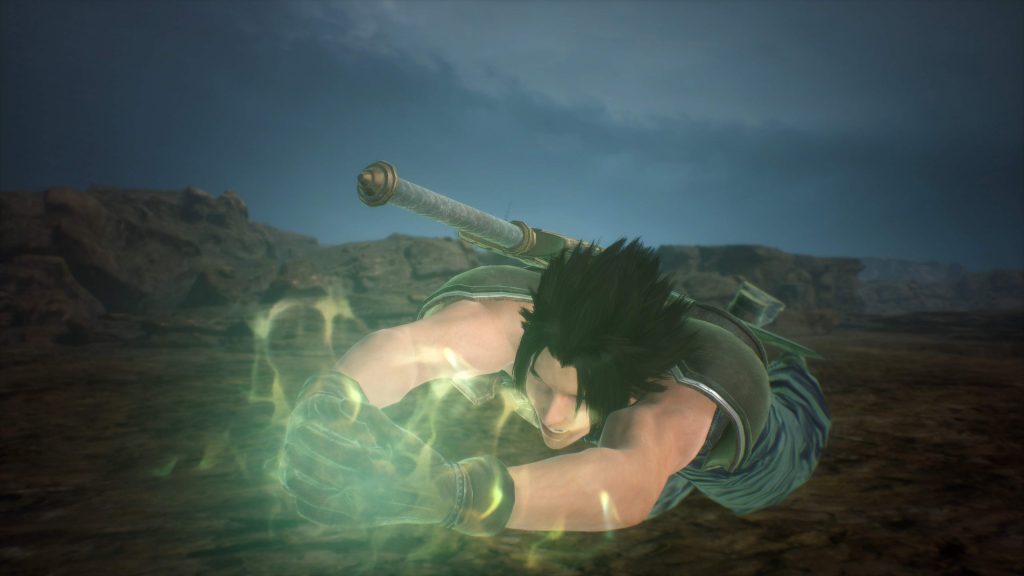 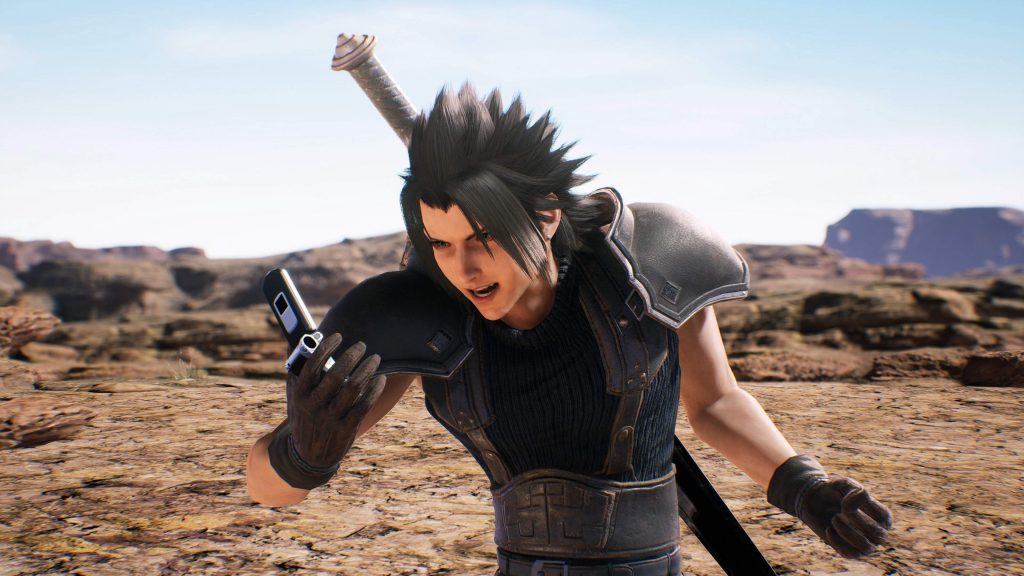 As someone who’s played the original Crisis Core on PSP many times over the years, I can tell you without a shadow of a doubt that Crisis Core – Reunion has improved the battle system considerably. While the PSP version of the game was extremely impressive for its time, the camera was clunky and problematic, and worst of all, Zack’s movements felt extremely slow and oftentimes delayed.

Reunion, on the other hand, feels a lot more like Final Fantasy VII Remake with its more responsive controls, smoother combat, and a camera that never gave me an ounce of trouble in the hours I spent with the game. The combat was smooth, fluid, and, most importantly, fun from beginning to end.

While the combat itself is fantastic, the overall world traversal is a bit dull. The game is pretty linear, and players don’t have a lot of room to explore the world to the degree you would in a traditional JRPG. Instead, Reunion depends on “Missions” that you can partake in throughout your playthrough. Sadly, Missions are not something that you typically discover while exploring or talking to NPCs. Instead, they’re are given to you in the main menu or are activated by reading emails that you get throughout the game. While some missions are worth your time for the rewards, a vast majority of them aren’t necessary to complete the game. In fact, during my first playthrough of Reunion, I only completed two of the 300+ missions available in the game and easily took down most bosses during my first or second tries with little problem. However, completing missions is a worthwhile way to spend more time with the game and offers you some pretty nice completion bonuses like rare Materia and powerful Summons.

Crisis Core -Final Fantasy VII- Reunion is significantly more polished than a traditional remaster, yet it doesn’t quite land in remake territory. Square Enix managed to take everything that made the original game great on the PSP and modernized it in ways that kept its spirit alive while also offering significantly improved visuals and countless quality of life enhancements. Not everything in Reunion has aged gracefully, but the overall experience translates surprisingly well to modern sensibilities. Sure, part of me would have loved to see Crisis Core get the full “Final Fantasy VII Remake” treatment, but still — replaying Crisis Core on modern hardware gave me that old, familiar feeling I had when I first played the game for the first time back in college all those years ago. 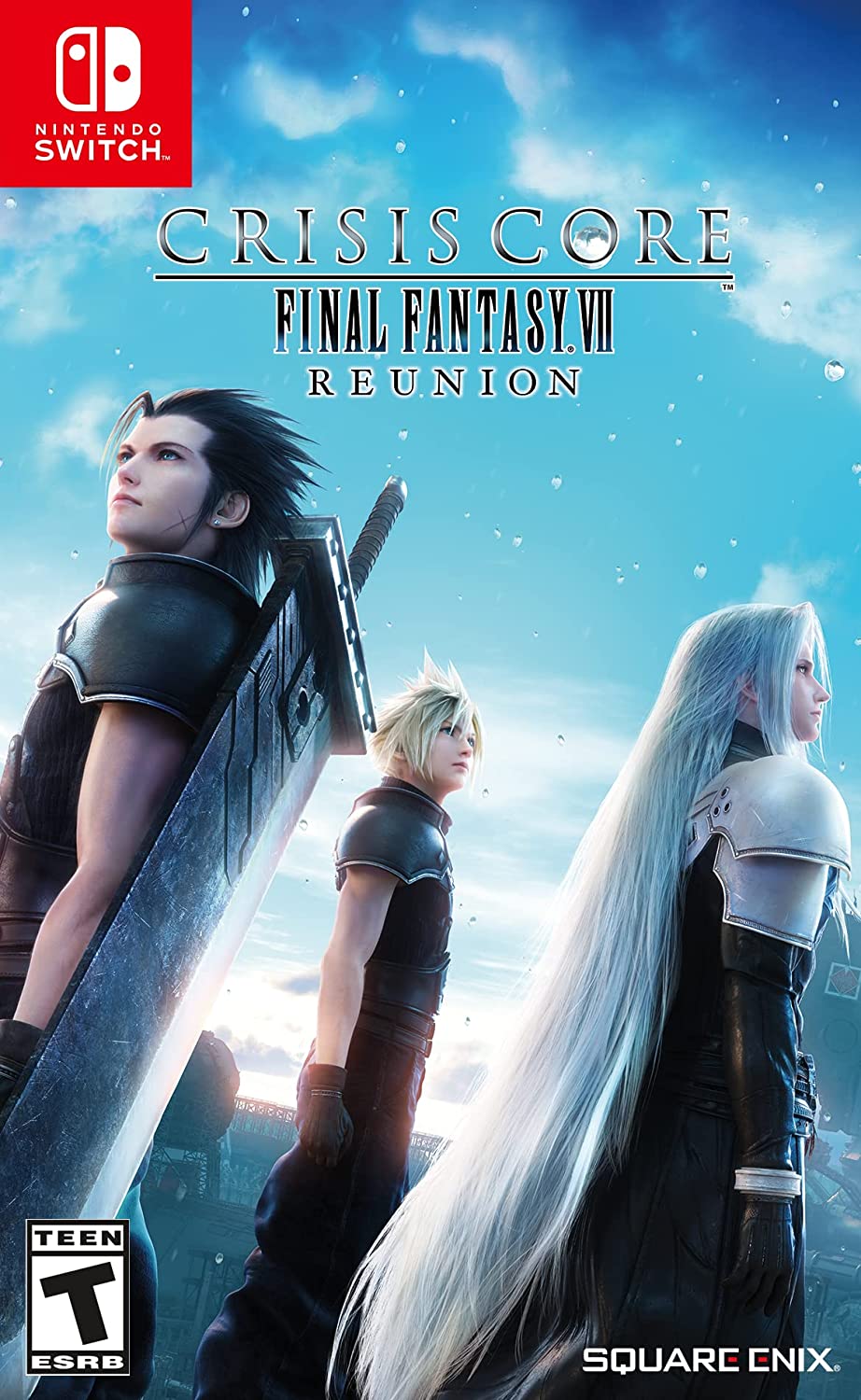