I’ve admittedly not been blown away by any video game offerings from the major AAA studios for a while now. Games have become so expensive to produce that the big companies tend to stick to the tried and true to avoid risks. But I’m a person who appreciates games that do something completely new – something that’s never been done before.

It’s with this mindset that, upon seeing Card Shark, created by the developer of the Reigns series, Nerial, and published by Devolver Digital, the game instantly became my most wanted of the year. It was so clever that I was smitten with its concept: a game about cheating at cards in pre-revolution France.

The game is finally out, and now that I’ve played it front to back, was my excitement justified?

KNOW WHEN TO HOLD ‘EM

Card Shark takes place in 18th century France, just before the French Revolution. You play as a nameless, mute young man who lives and works in an inn with a crotchety innkeeper. After filling the wine glass of a particularly eccentric, wig-wearing man by the name of Comte de St-Germain (who was a real world man who claimed to be an alchemist and was rumored to be immortal), he asks for your help. He thinks a waiter without a tongue would be a perfect unsuspecting accomplice in cheating at cards. After things go sideways, you team up with the Comte to lie, cheat, and charm your way through France’s upper crust. Eventually, motivations are uncovered and secrets are revealed, but I do not wish to spoil anything. 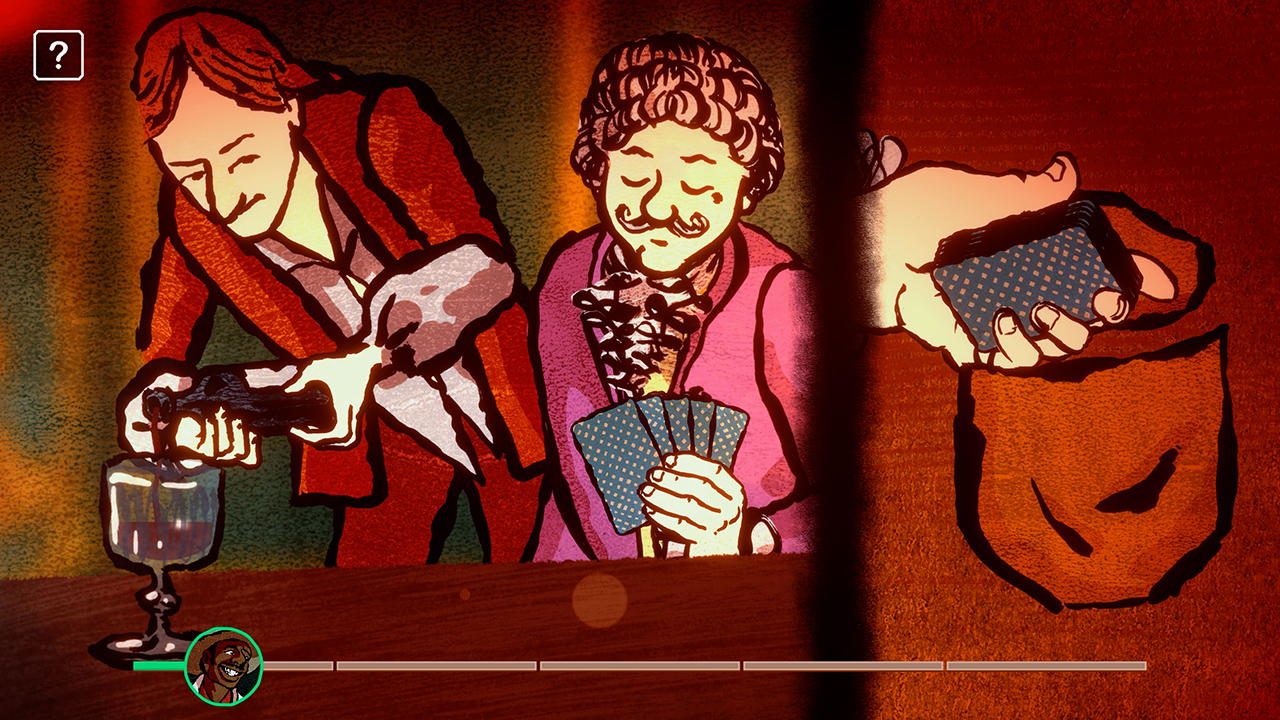 The game sees each location you travel to acting as its own “minigame”. At no point in this game about cards do you actually play a card game. In fact, it’s never revealed exactly which game is being played. Victory or defeat simply comes down to your ability to follow instructions exactly and think on your feet quickly.

Before each level, the Comte explains the latest mark and the scam he plans to run on them in the carriage. These are varied and numerous, and seeing what crazy new way there is to cheat is one of the most exciting parts of the game. Some grifts have you acting outside the card game, like looking at an opponent’s cards while pouring their wine and signaling the Comte with different directions as you wipe the table. Other times, you have to manipulate the game. This can include false shuffling, card bending, looking at dealt cards in a reflection, marking cards, and much, much more. Every stage has a different gambit, although a handful of them consist of combining techniques from other scams. 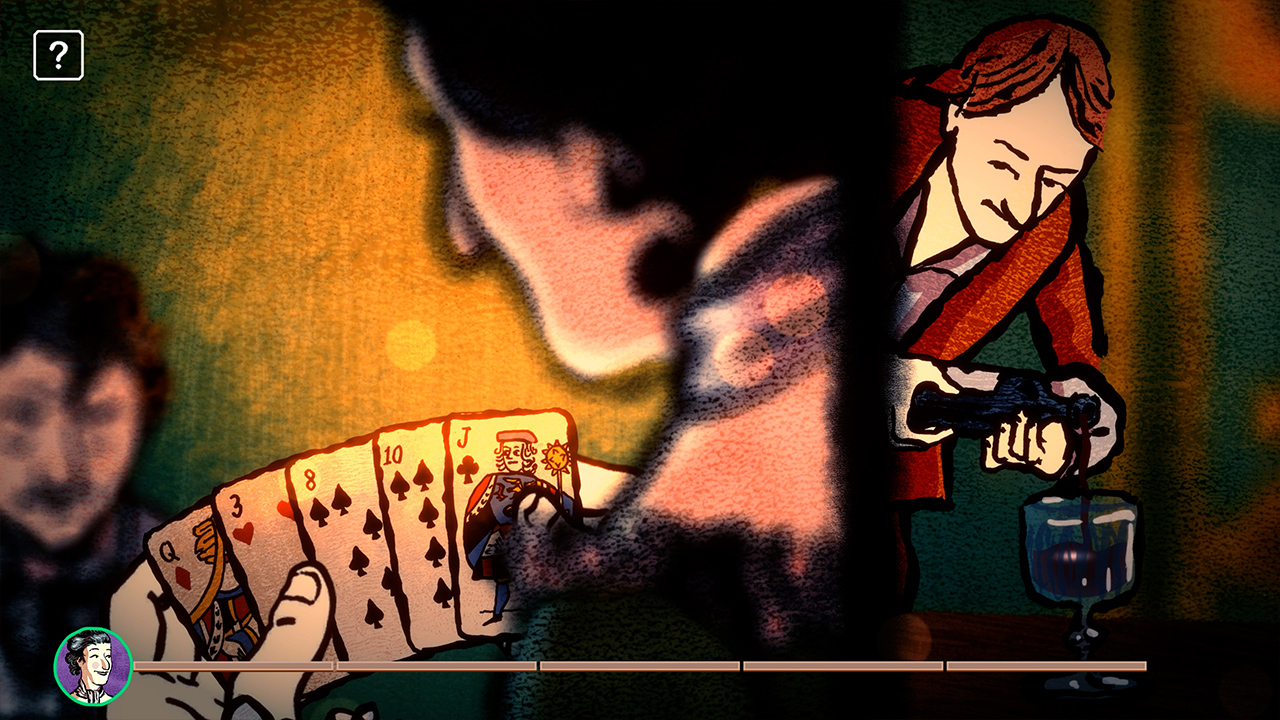 The techniques themselves are performed with well timed buttons and stick movements. You shuffle with the control stick, pressing different directions if you want to shuffle for real, false shuffle, or “injog” a card. You’ll be pressing buttons in time to palm a high card without anyone noticing. Some of the techniques require no timing, but memory, like the aforementioned glancing at the card in a shiny tobacco box on the table.

The sheer variety of the scams is a ton of fun, and it was smart to make a new one for each level, so that it never gets stale. However, the more complicated tasks can take a while to get used to. The tutorials let you try as much as you want, but a few don’t do well enough explaining what you are doing, or not detailing the concept behind the trick thoroughly enough. I failed more tutorials than I did actual levels. There is also, as far as I could tell, no way to skip a tutorial for a scam you haven’t done yet. So I had to brute force a few tutorials, doing them over and over until I figured out the issue without much help from the game. But again, this only affected a handful of the almost 30 techniques. 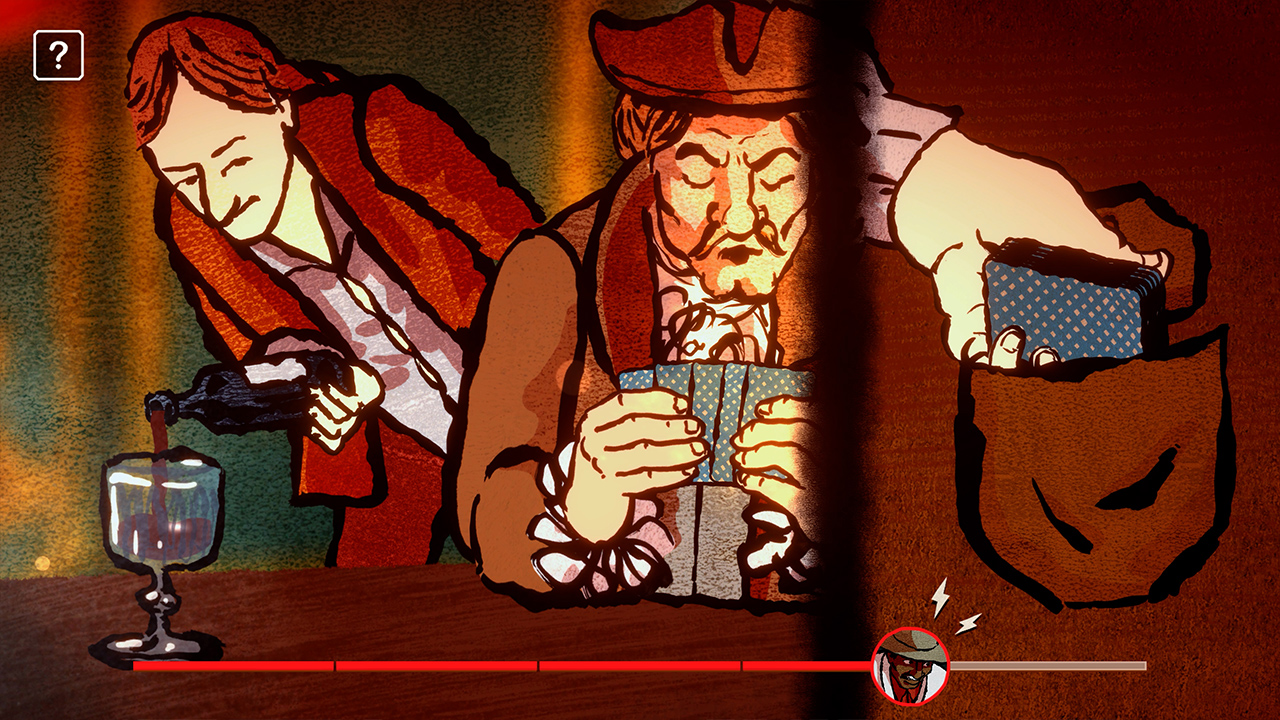 The variety in the gameplay is both Card Sharks’ biggest strength and weakness. While I overall liked the pacing and constant learning, there are several aspects of the game that are forgotten or not pushed to their full potential. For example, early on you learn how to rig a coin toss. This is used a few times in the story to great effect. On the other hand, you also learn how to do Three Card Monte at the beginning of the game, and, unless I missed it, you do not perform the trick anywhere outside the place you learn it. These tricks outside of a card game are an area that the game doesn’t explore enough. There’s plenty of room for fun story moments that involve cheating that aren’t card games, but these fall by the wayside, especially in the later portions of the game.

From a presentation standpoint, this game is a stunner. Every part of the game is oozing with love for the time period, the region, and the sport of gambling. One of the leads on the game, Nicolai Troshinsky, cites the classic film Barry Lyndon as an inspiration for Card Shark, and it shows. The game’s monoprinting art style creates a unique visual palette that makes the game feel like a painting come to life. Even more exciting is the gorgeous soundtrack, arranged and composed by Andrea Boccadoro, and performed by a real orchestra, complete with a choir. The music ranges from bouncy chamber music to tense, plucky numbers to heighten the tension. I’m a sucker for orchestral music, and this game delivers. 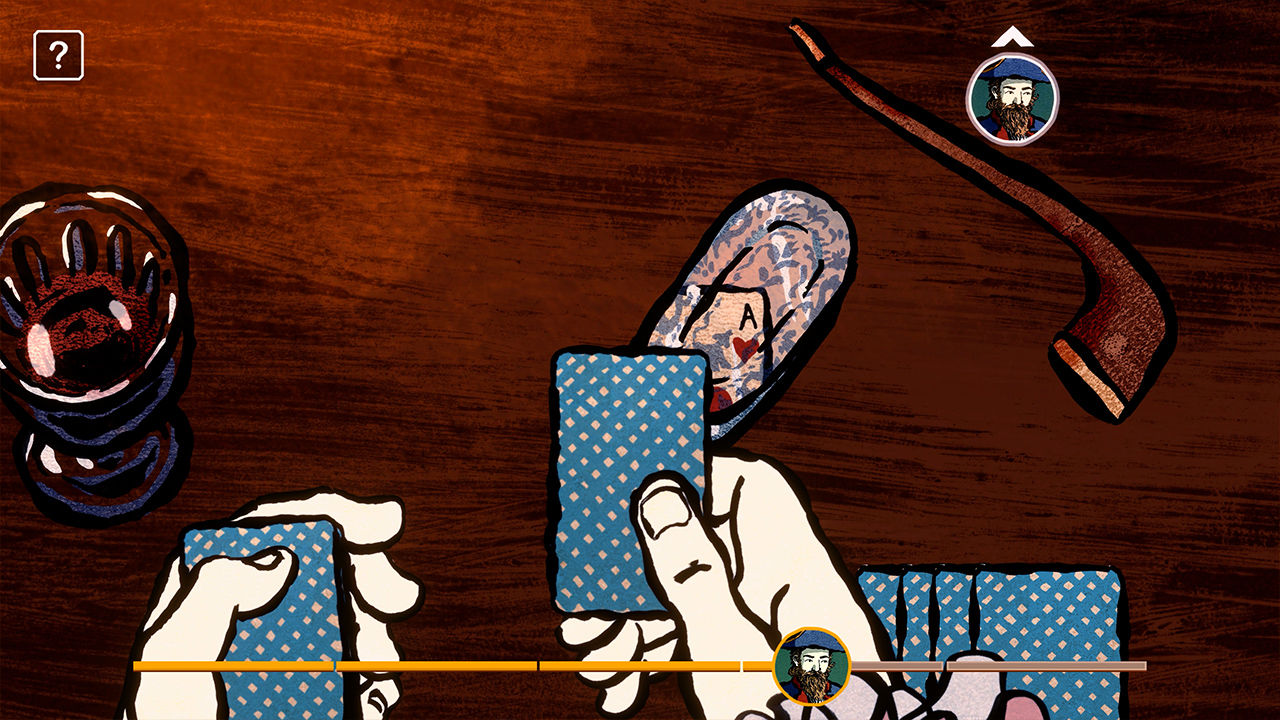 The game’s story isn’t anything groundbreaking, but it is easy to get invested in. The characters are fun and distinct, and many have different reactions if they find you cheating. Some are excited! You even meet a number of real life figures, like Casanova and Voltaire. The story isn’t consistent, though. Once you reach the end of the game, things happen quickly and without much explanation. I won’t spoil anything, but events that should have been built up more or happen with more player agency happen off-screen, and it’s up to the player to piece together what happened.

That being said, the story is still engaging, and the game shines most when it surprises you, like using your skills outside of the game, or when unforeseen factors invade your peaceful game. There are a number of people who want you and the Comte dead, and any time it comes up, the game becomes much more exciting. 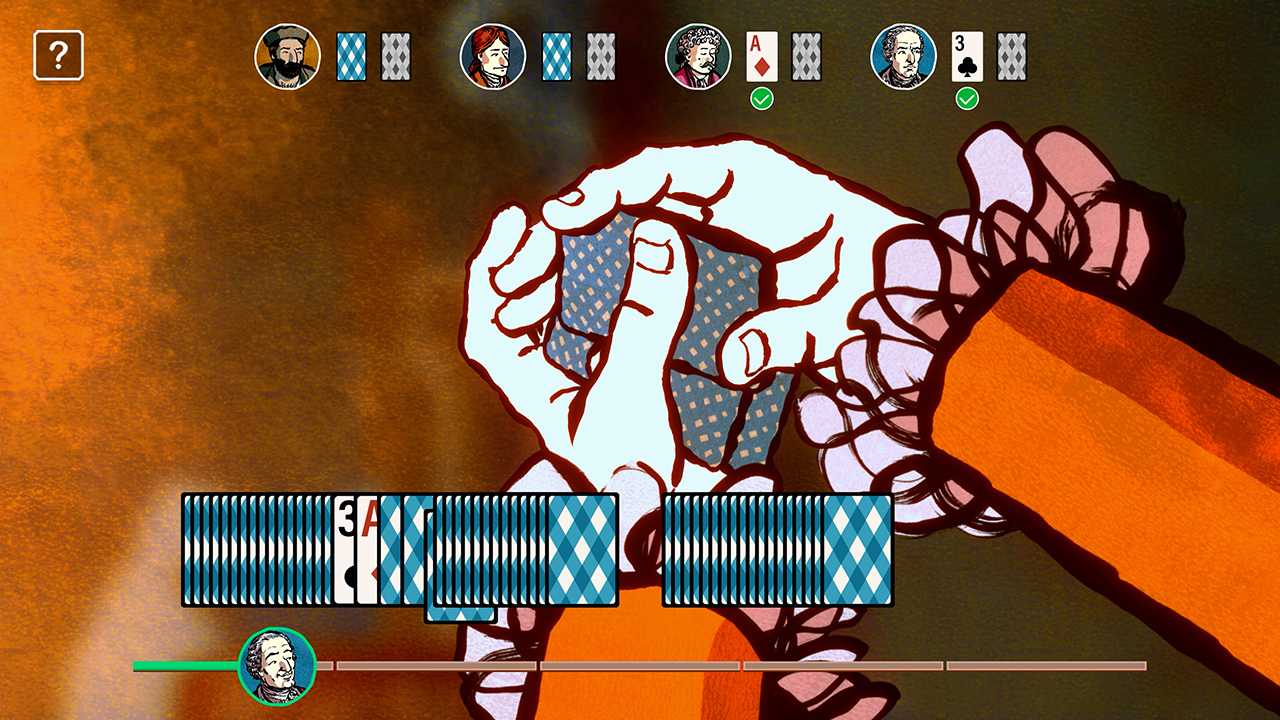 Even if you don’t find the story thrilling, the game is a brisk 5-8 hours, which is perfect. It does not overstay its welcome, and is constantly doing new things rather than trudging old ground over and over to pad it out. It’s the perfect length for something so niche and unique, so anyone could squeeze this game into a long weekend’s gaming session.

Card Shark is exactly the game I wanted it to be. Its unique concept, setting, and presentation set it apart from every other game on the market right now. The very idea of a game about cheating at cards is brilliant, and the team came up with some pretty ingenious ways to translate what amounts to subtle signals, side glances, and modifying cards into a fun and challenging video game. The tutorials don’t always do the best at helping you fully understand what you are doing, but it didn’t detract from the experience too much.

The biggest sin the game commits is that of missed potential. Many techniques are only used once, and the team could have had some more creative uses of your skills outside of the card games. The presentation, though, is spectacular, and the art and music do a fantastic job of making the world feel alive and lived in. Though the story stumbles a bit at the end, the momentum never lets up, and you will happily breeze through the game. I hope we see more games like Card Shark. The world is a better place with risky, unique games like this, and anyone looking for something completely new should absolutely pick it up. 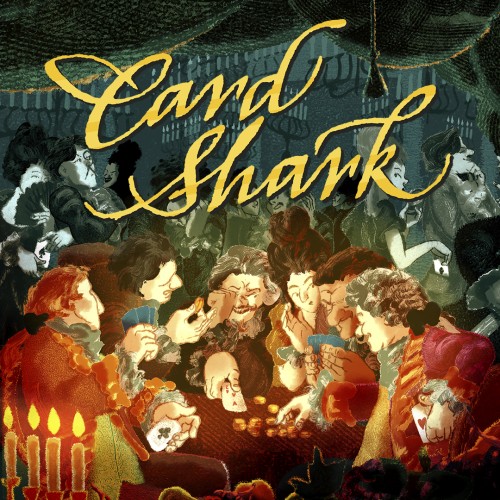