When I picked up Bugsnax for this review, I knew that it started life as an exclusive launch title for the PS5, but little else. I thought that Bugsnax was the name of the protagonist, and that it would be your standard quirky adventure game. Instead I was greeted to an island full of the titular “Bugsnax,” bugs literally made of snacks, and in hindsight that name is so on the nose that I probably should have surmised what this game was all about from the title alone. 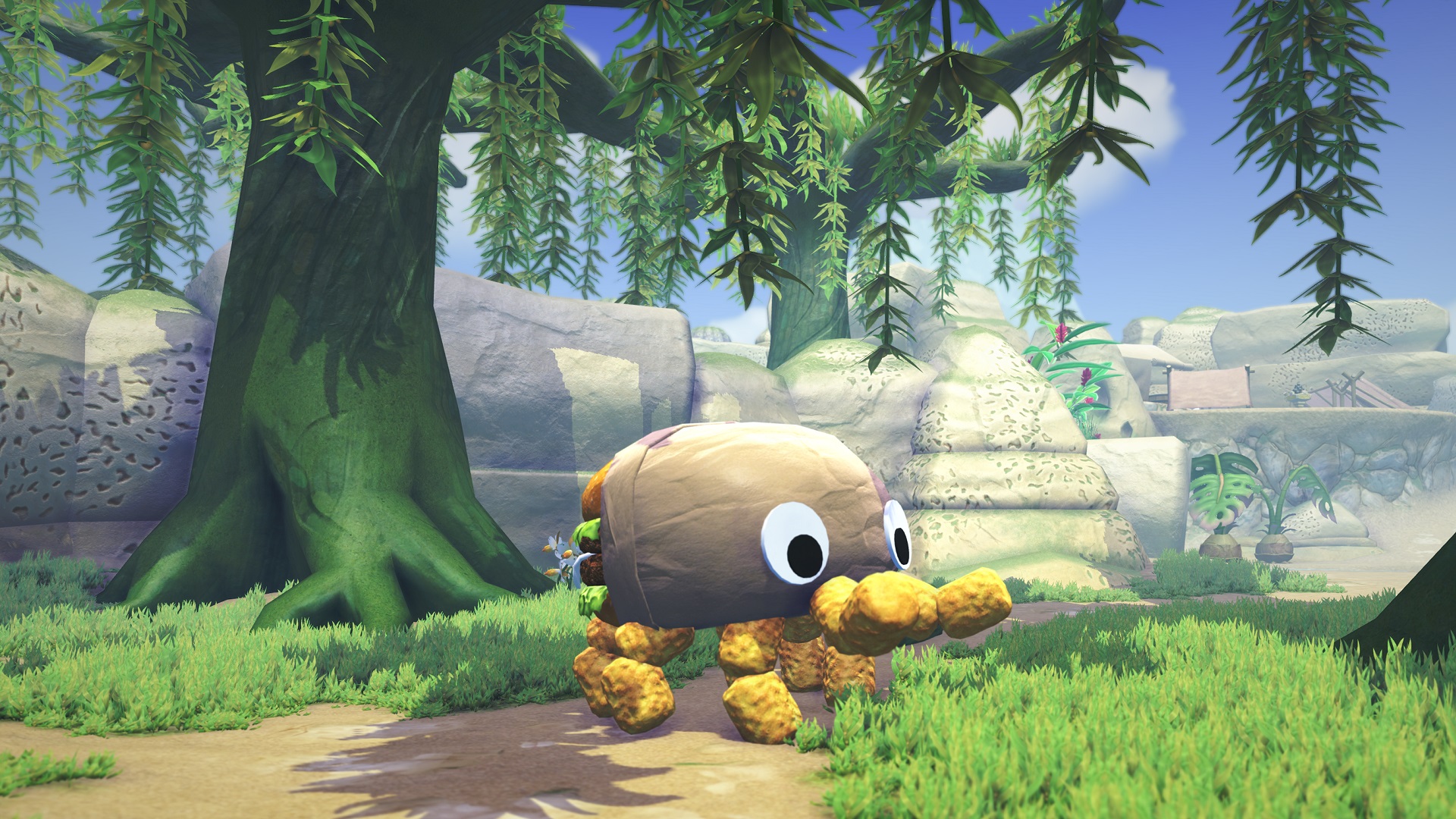 Bugsnax starts out with Elizabert Megafig inviting the player character, a journalist, to Snaktooth island where Elizabert has discovered a species of sentient snacks that all take the appearance of various bugs. Once you reach the island, however, you discover that Elizabert has vanished and that the rest of her party have all abandoned their basecamp, Snaxburg. What follows is the journalist’s efforts to figure out what happened to Elizabert, and to do that you’ll find yourself catching different species of Bugsnax and convincing each Snaxbug’s residents to return to town.

Although it is billed as an adventure game, Bugsnax is surprisingly story heavy. You can explore the island and catch all the Bugsnax your heart desires, but the main focus of the game is solving the mystery of what happened to Elizabert. As you complete missions for each resident of Snaxburg, they’ll slowly become convinced to return to town, at which point you can interview them, asking questions that will help you zero in on exactly what happened before you arrived. Questions like “Why did you come to Snaktooth with Elizabert?” and “Why did you leave Snaxburg after she disappeared?” The progression of the game ultimately relies on you bringing each resident back to Snaxburg and finding out what they know. 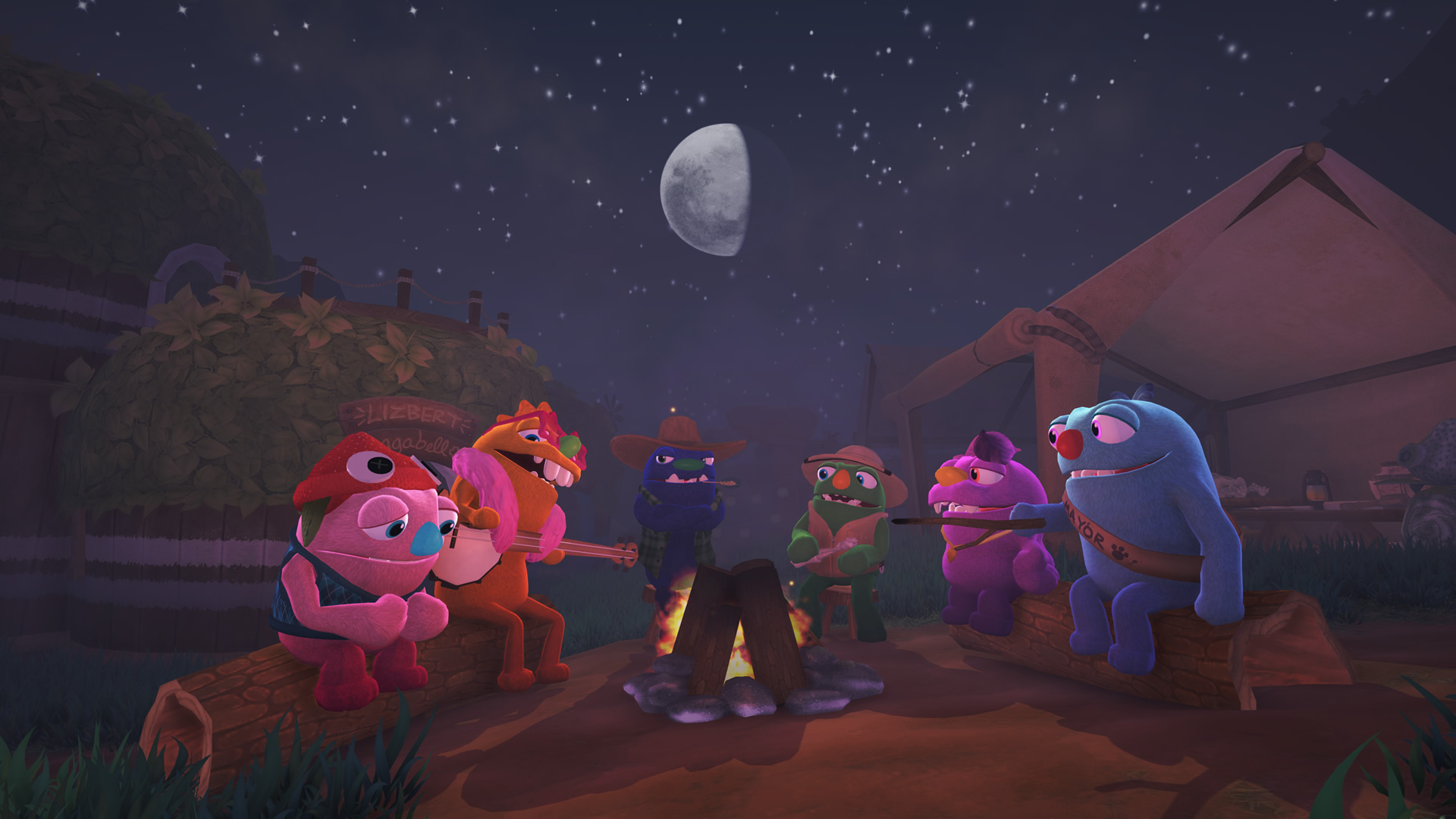 The writing here is quick witted and funny, but is also surprisingly mature and a little dark at times too. Relationship difficulties, mental health, and grief are just a few of the subjects broached, but none of it is too heavy handed, and it’s handled elegantly enough that younger players can still have a great time if all they want to do is catch tasty little critters.

The story itself is darker than it appears at first glance too, and the buildup to its climax had me hopeful, but I don’t feel like it delivered quite as well as it could have overall. So much of this game caught me pleasantly off guard that it’s possible that I raised my expectations for the finale a bit too high, though. 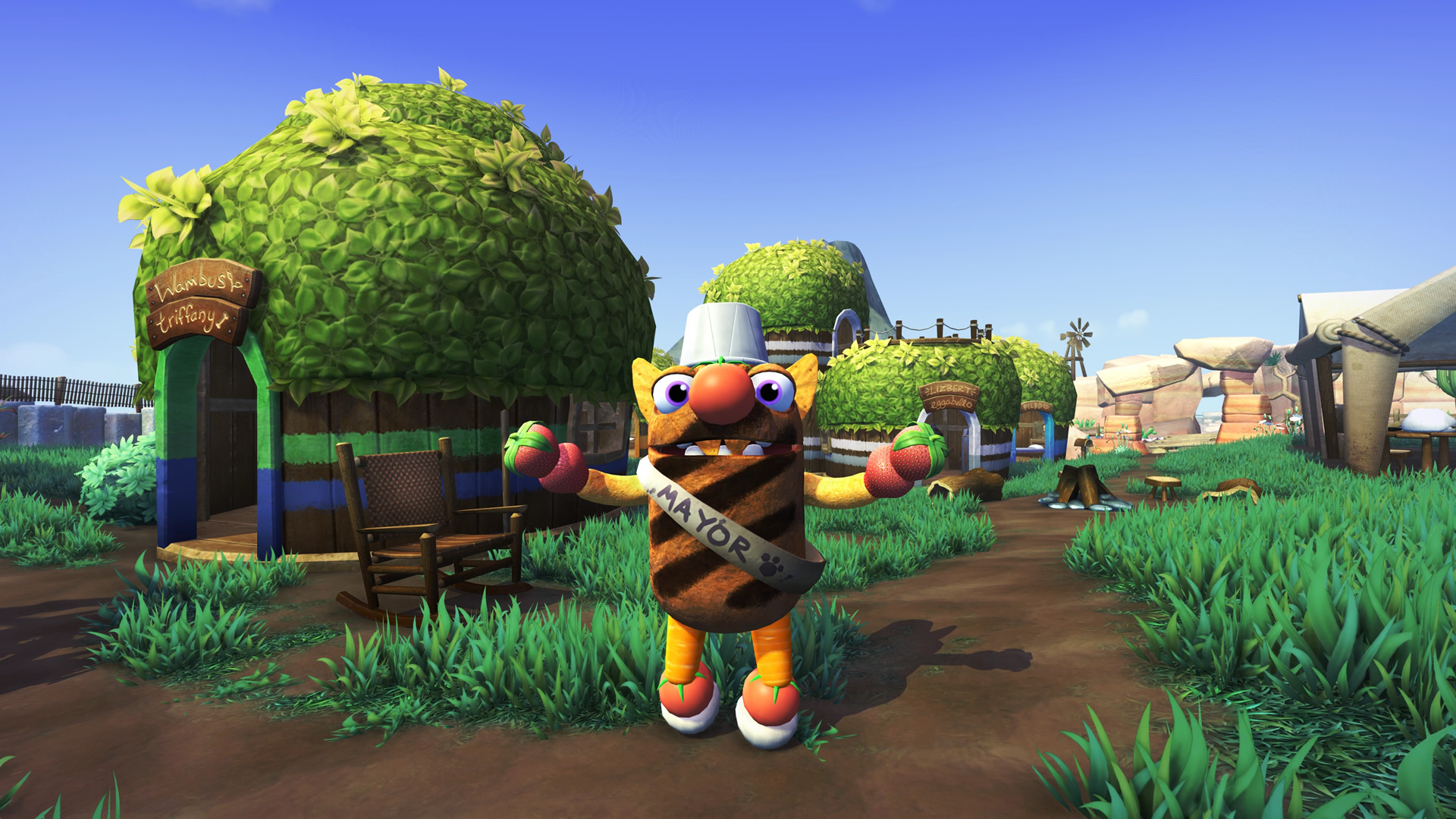 The character writing in particular really drew me in, especially when paired with the phenomenal voice work for each character. Conversations not only feel naturally written, but also naturally performed. Each character has a distinct identity and realistic motivation, and I want to give special mention to the inclusivity of the cast here. Same-sex and opposite-sex relationships are both present here, and every LGBTQ character in the game is well-rounded outside of their sexual and gender identity. They’re allowed to just exist and be a part of the story without any of the conflict being centered on their identity, and it’s a beautiful thing.

Playing With Your Food

Bugsnax’s gameplay is deeper than I anticipated from a game about catching cute creatures. You’ll find yourself using a variety of tools and hints in order to figure out the best way to catch each one, meaning you’ll treat each Bugsnax like a puzzle to solve, rather than something to toss a trap at and move on from. 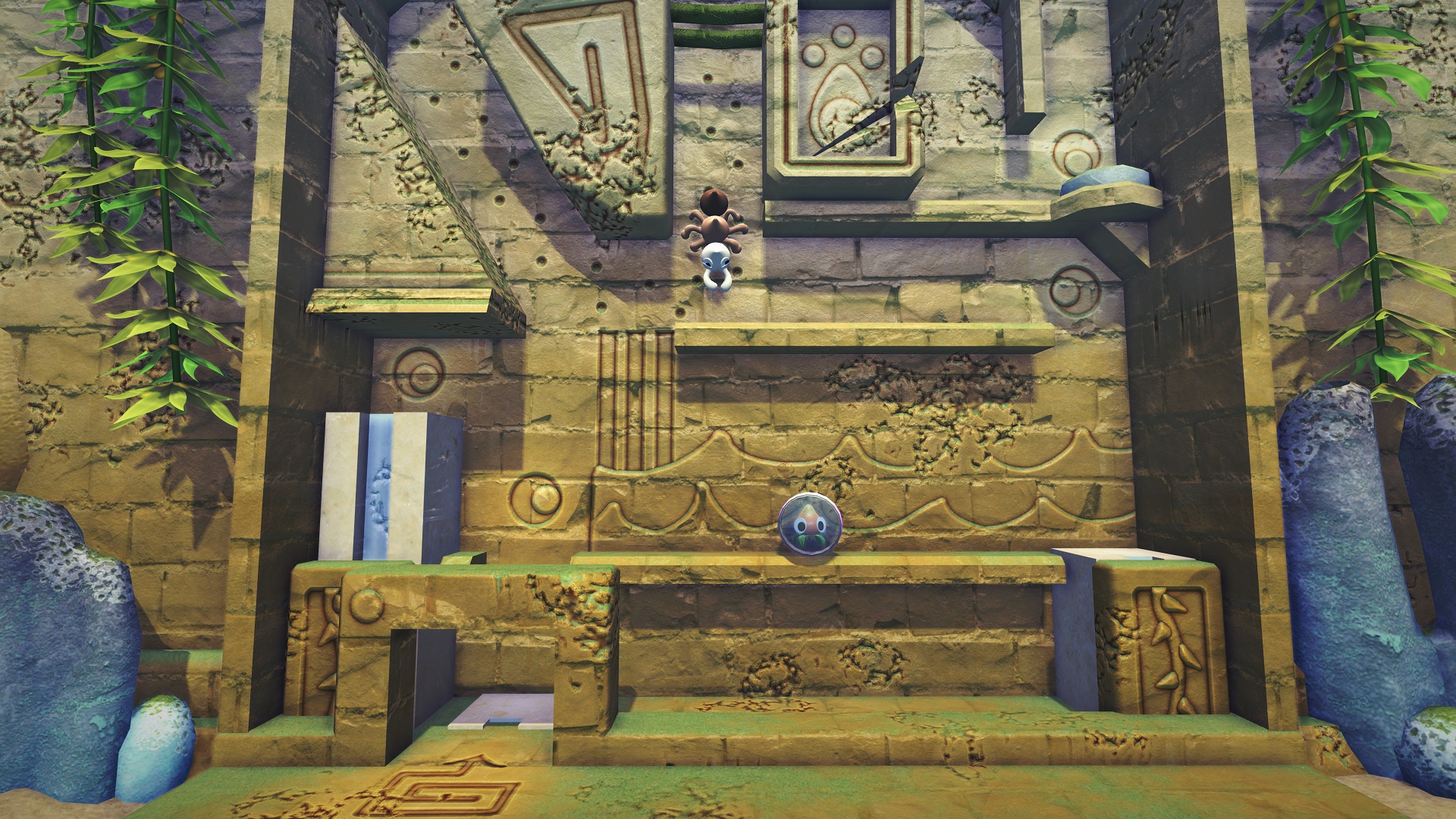 The game’s free DLC, the Isle of Bigsnax, adds to this complexity as well, not only introducing more complex overworld puzzles, but also a new item to add to your arsenal, Shrink Spice, that will be instrumental to figuring out how to catch the giant Bugsnax roaming around the new location. The core loop of finding a Snaxburg resident and catching the Bugsnax they request can get a little repetitive, but I found that their situations and particular wants were varied enough that there was never a moment where I felt like I had done the exact same mission for another character earlier on.

There are over 100 Bugsnax to catch too, so if I ever got a little bored with the story missons, I could venture off to hunt down each type of Bugsnax on the island instead, and vice versa, to keep myself entertained.

The game’s DLC, the Isle of Bigsnax, is baked into the Switch version from the get-go, though you’ll have to advance pretty far in the story and a few different side-quests to trigger the story portion of the DLC. Once it’s active, you and a few of the other characters will venture off the coast of Snaktooth to a brand new island, where the Bugsnax have grown to enormous proportions. 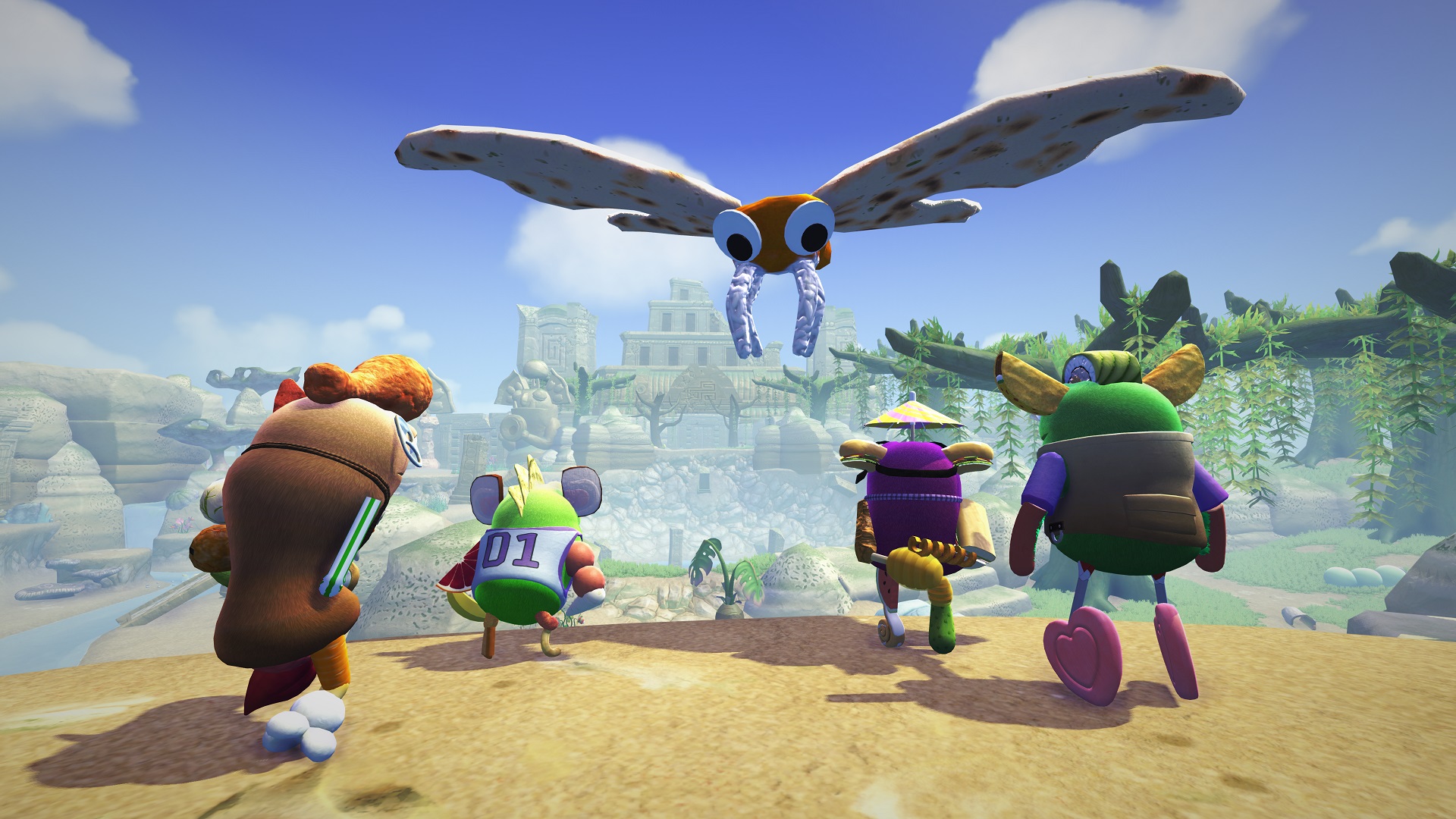 Almost every Bugsnax included in the free Isle of Bigsnax expansion is a brand new type of bug or food, so make sure you explore every inch of it when you get the chance in order to discover them all. Back on the Snaktooth side of things, there is additional content from the DLC that is available to you earlier on in the game, and it’s pretty entertaining. You’ll be given your very own hut in Snaxburg to live in, and as you complete requests for the other residents they’ll give you gifts you can display around your hut to personalize it a bit. Your hut also has a mailbox, where characters can send you requests to complete, separate from each of their questlines. There are over 180 different customization options to obtain, so make sure you dive in and complete each request that’s mailed to you.

When it comes to technical performance, Bugsnax runs decently on Switch. I only ever experienced slight stuttering most of the time I played, though any motion far away from the camera is a little choppy, likely to save on performance resources. There is considerable pop-in in a lot of the environments, but it is handled well. I noticed that when plants would pop into existence when I got closer, it almost looked like they were growing out of the ground instantaneously. I don’t know if that aspect of the pop-in was a purposeful decision, but I actually found it pretty charming.

Elsewhere, performance-wise, there was one point early on where I got stuck to a wall and could not escape, no matter what I did, causing me to reload the most recent save I had. I also experienced one crash during an early interview, but I had left the game open in sleep mode for a few days at that point, which may have been the cause. My final technical problem was a bit humorous, as I somehow broke the collision between the player character and the environment in the final scene, and ended up falling into a chasm in the ocean as a result. Once I respawned on land, I was floating in the air in a constant falling animation and ended up unable to get back on the ground for the rest of the game. Luckily, none of these issues affected my ability to play and finish the game, and I’ve been told that the team is aware of “a few graphical and physics issues on the Xbox and Switch versions that should be fixed in the Day One patch.”

For a game that I knew nothing about before diving in, I really enjoyed my time with Bugsnax. It ended up being more story based than you’d expect from a bug-catching adventure, and the game is all the better for it. 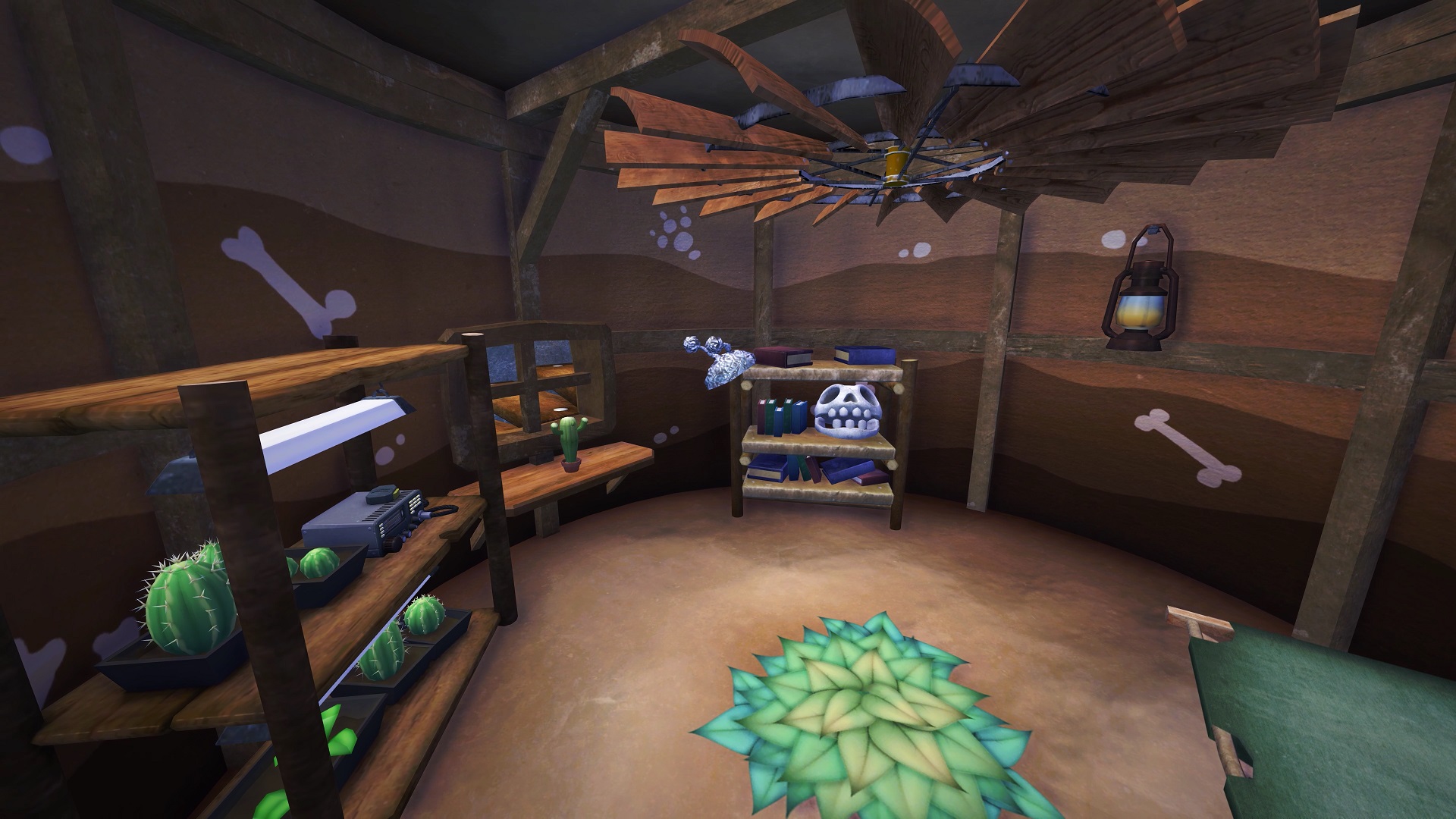 I enjoyed that the story that was fueled by a diverse and well-rounded cast of characters just as much as I reveled in catching all the cute creatures I could find. Despite an ending that I felt was anticlimactic and some minor technical issues, I think Bugsnax is a hearty dish that is well worth every Switch owner’s time. Bugsnax, with the baked in Isle of Bigsnax DLC, is out today, April 28th for Nintendo Switch, so you can pick up a copy and dig in right now. Happy snacking! 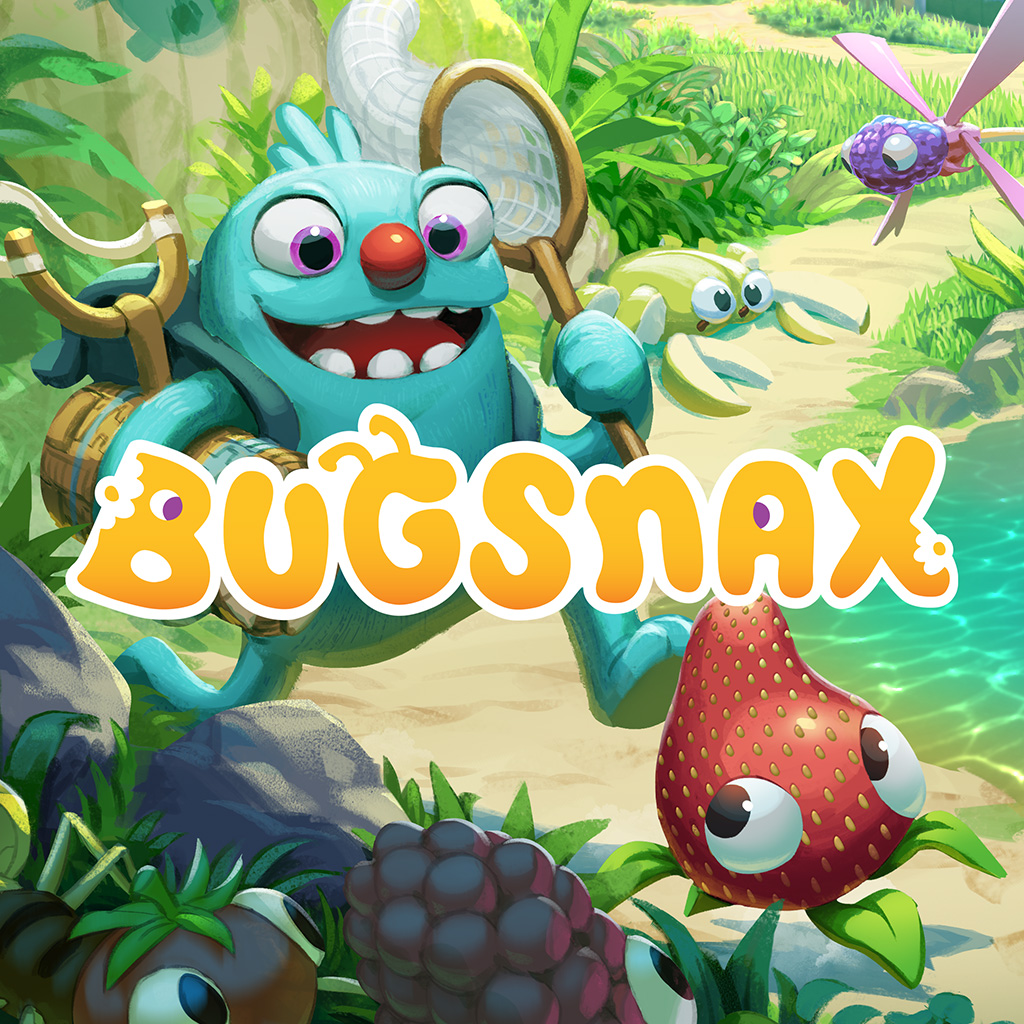