Genre mashups are so intuitive that you can describe them in an old Reese’s slogan: “two great tastes that go well together.” And when it goes well, the end result is indeed like the holy union of chocolate and peanut butter, the two sides drawing out each other’s strengths while diminishing their weaknesses. And in the world of video games, simulators and action games tend to have such high compatibility – Rune Factory and Ever Oasis are two excellent, severely underrated examples of combining the high-paced fluidity of an action RPG with the methodical casualness of a town/farm simulator. But there are countless other genres just waiting to be matched with that special someone.

On the surface, Boyfriend Dungeon is a natural fit – a dating sim? Where you go dungeon crawling? And date the weapons??? It sounds delightfully absurd, and a great way to combine the emotional depth of visual novels with the technical responsiveness of an action game. And Boyfriend Dungeon certainly earns an A – for Adequate. It’s fine. Just fine. 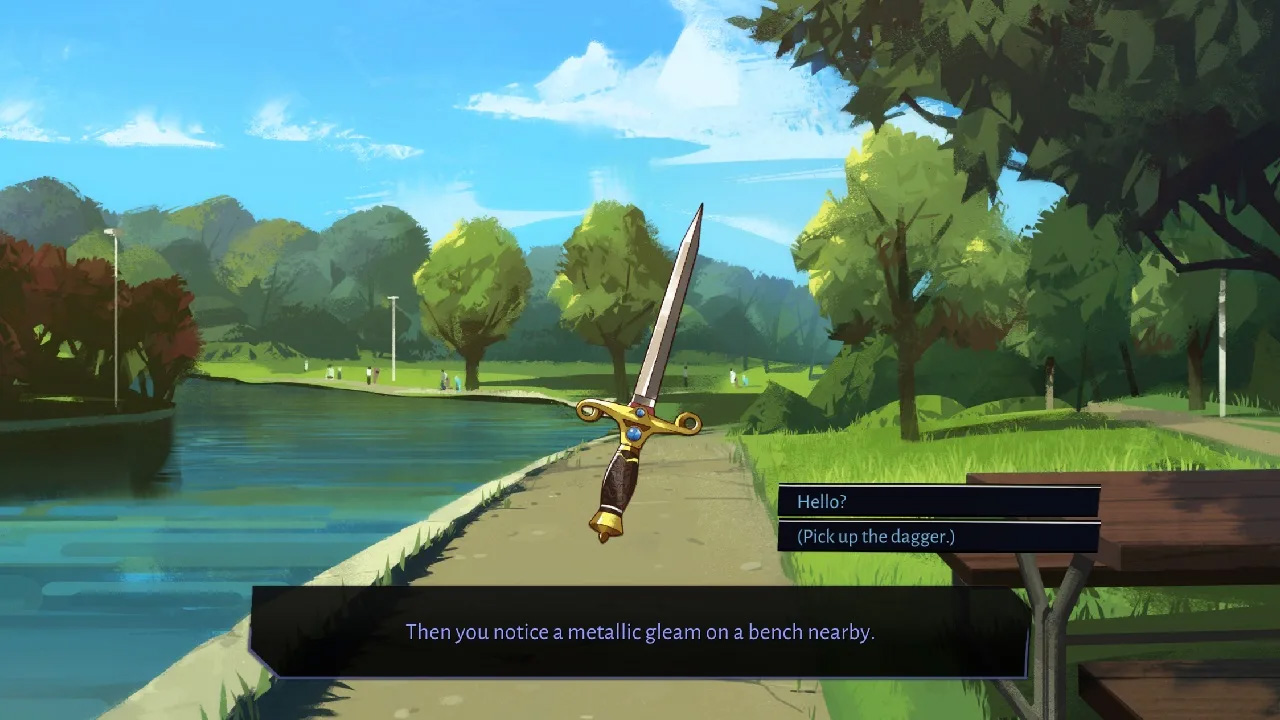 The premise of Boyfriend Dungeon is hardly unusual. You’ve moved to hot Cali locale Verona Beach for the summer, but are a bit of a nervous nancy with no dating experience, so your cousin Jesse tries to hook you up. After your first date with a skeevy normal guy named Eric, you quickly end up on a gig economy path of exploring dungeons – and just happen to find hot, single weapon-people inside who are ready to mingle. Time to conquer the dungeons (called “the dunj” within the game’s parlance) and woo whoever you find most appealing.

Boyfriend Dungeon’s most immediate appeal is in its visuals, which offer two different but equally charming art styles. The visual novel segments offer the typical attractive people one expects from the dating sim genre, with a great variety of character designs which are rendered in a decidedly non-anime style, which is always nice to see in a genre usually dominated by Japanese (or Japanese-inspired) games. Meanwhile, the dungeon crawling looks like it’s conducted by little Playmobil models, which I say with the highest praise – it’s not only adorable, but decidedly unique. Toss in the ability to customize your appearance and the game is a visual treat. 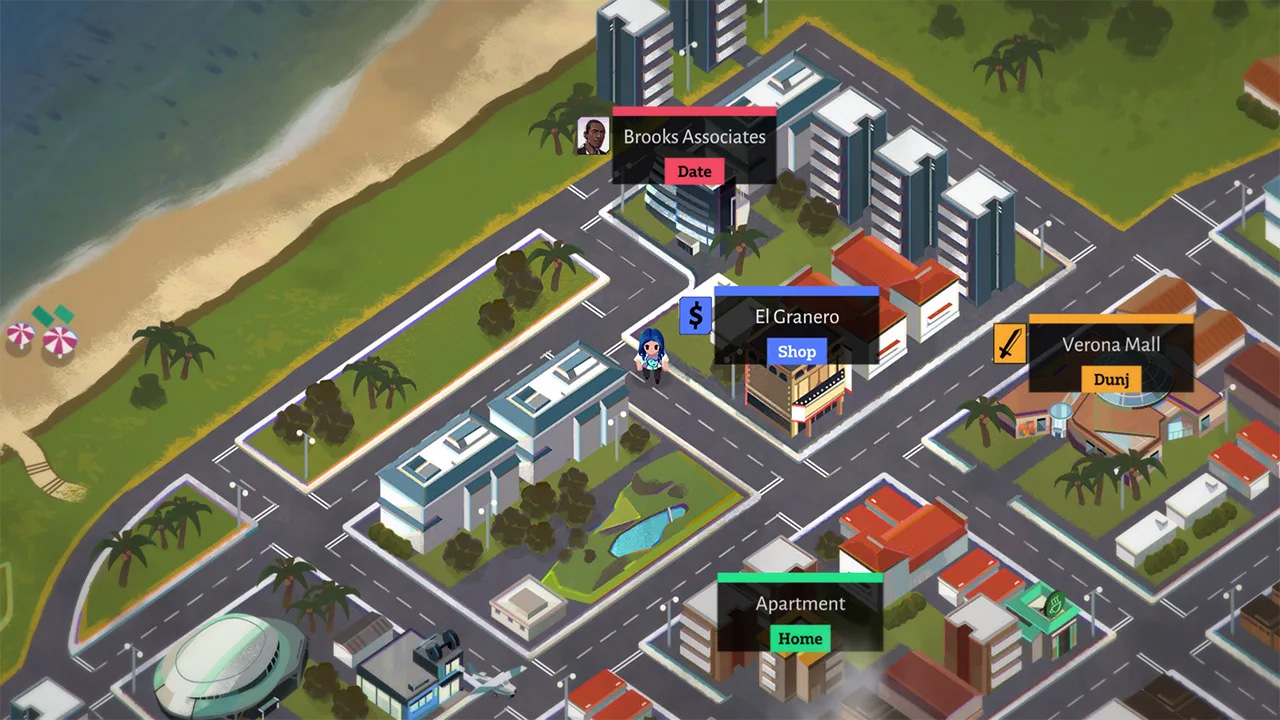 Of course, someone can be all looks and no personality, and in a game like this characterization is paramount. There are seven weapon-people you can wield and court (or, more accurately, six weapon-people and one weapon-cat), ranging from a depressed Kpop idol to a gothic enby camped out in their mansion. This sounds more entertaining on paper than it really ends up playing out, as the writing feels like it falls short of realizing most characters’ potential. While there were a few I legitimately enjoyed, like Sawyer, a sprightly polearm and disaster college student, or Pocket, the aforementioned cat (who is… a cat. A very cute one!), but in general the “routes” lasted just long enough to grant each character the smallest of arcs, none of which felt explored to the greatest potential. While I didn’t dislike any of the dateable characters outright, they felt so underwhelming for what they were in concept. One was a vampire! A vampire sword-person! And the game neither revelled in the absurdity of such an idea or exploited it to its full dramatic potential, ending up with a milquetoast middle road where few of the characters end up really sticking out. It’s not even that they’re particularly alike or undistinguished from one another, it’s just that the majority drip in wasted potential.

Complicating matters is how each weapon plays. When I started the game, I immediately wondered what would happen if the most fun character to play was the one whose personality I liked the least, or vice versa. This concern mostly ended up irrelevant, as the weapons are all close-range, quickish to strike, and have similar combos. A couple are more medium-range and slow, but they all play quite similarly. There’s no bow, or gun, or even a spear to mix things up playstyle wise. As a result the gameplay gets decently repetitive after a while, even though the enemies you fight (manifestations of your own suppressed fears) are cutely designed inanimate objects. While the weapons don’t feel EXACTLY the same, they’re similar enough that in comparison to, say, Hades, there isn’t really a mix of potential playstyles – you kinda just figure out which two or three you like to use the best and only use the others when you need to boost their affection. 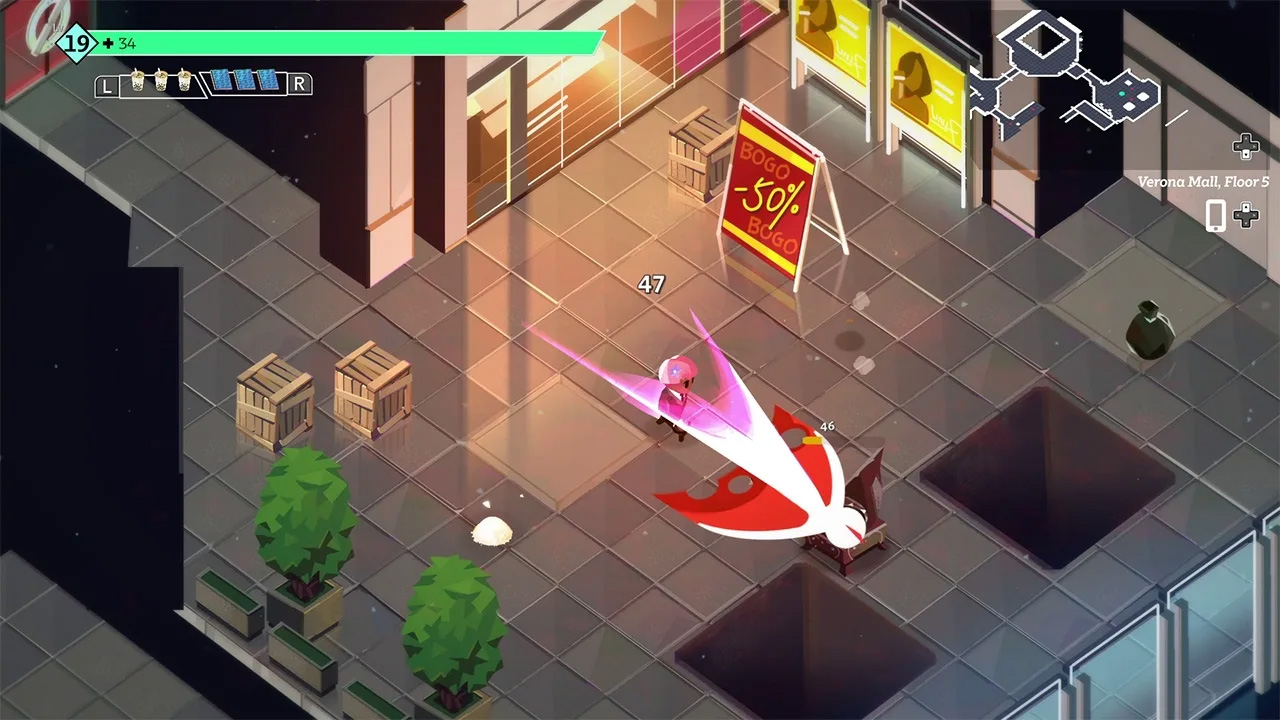 I found myself comparing the game to Hades a lot as I played, actually, which felt somewhat unfair, despite them both being isometric action rougelites (even if Boyfriend Dungeon pushes the “lite” half of that compound word stronger than almost any game I can think of). Hades is clearly laser-targeted on the silky smooth gameplay before getting to its romantic mechanics, while Boyfriend Dungeon tries to split its attention between both. If I wanted to, I could easily point out all the things Hades gets right and this game doesn’t, but I feel that would be neither warranted nor constructive. I would rather discuss Boyfriend Dungeon on its own merits, and its own topics.

And one of those topics is the proverbial elephant in the room, and has taken up the vast majority of social media dialogue surrounding the game. I’ll attempt to explain it as simply as possible (spoilers ahead, if you care)- Eric, your first date (and, in honest regret, the most central and important character to the narrative), turns out to be a major creepazoid stalker who constantly attempts to flirt and make advances on you in the most uncomfortable way possible. Despite the fact that Eric is clearly depicted in a horrid light (and that a warning about his actions shows up at the beginning of the game), several people have expressed discomfort and displeasure with such a malicious and vile character, creating a whole Discourse around it.

I feel conflicted about the topic. On the one hand, the game’s framing is unambiguous about how completely terrible Eric is as a person, and you almost immediately gain the ability to spurn him at every turn. On the other hand, Eric shows up noticeably more than other cast members to an annoying degree (which… well, I guess he IS a stalker, so…) and the game attempts to court some sympathy for him towards the end, showing him as regretful and just a sad, lonely, self-hating man who didn’t know what to do with himself. While the ending has him vow to go to therapy and change his ways, and I don’t mind an ending that sets up potential for redemption, I can see how the narrative pitying such a slimeball can rub people the wrong way.

I do think, in concept, the Eric storyline is interesting from a game design perspective. Dating sims run on the premise that you, the player, have a choice in who to make romantic advances on, so having a character make unwanted advances on you in turn is an intriguing twist on the concept. While I don’t think it meshes well with the rest of the game, which is very conventional when it comes to romantic wish fulfillment in dating sim design (and clashed tonally as a result), I do think in theory it could have been subversive and daring – and to an extent, it still is.

The bigger issue for me is that Eric was simply unbelievable as a character – his actions can be repugnant to such an abhorrent degree that he feels like a cartoon (one of your first conversations with him makes him out to essentially be pro-slavery towards weapon people which… wow!), and the attempts at nuance towards the narrative’s end are simply too little, too late to make an impact. He doesn’t feel carefully written enough to be a truly tragic figure, but nor is he so one-dimensional that you can simply hate him and move on. It’s like he exists in some nebulous in-between, which is honestly a microcosm of the game’s issues as a whole: it lacks the punchy immediacy of jumping into new runs in a roguelite or the huge variety of combos you’d see in an action rpg, while also lacking the extreme length and character depth of a proper visual novel. Instead of enhancing its core genres’ attributes, their goodness has been watered down to fit together. 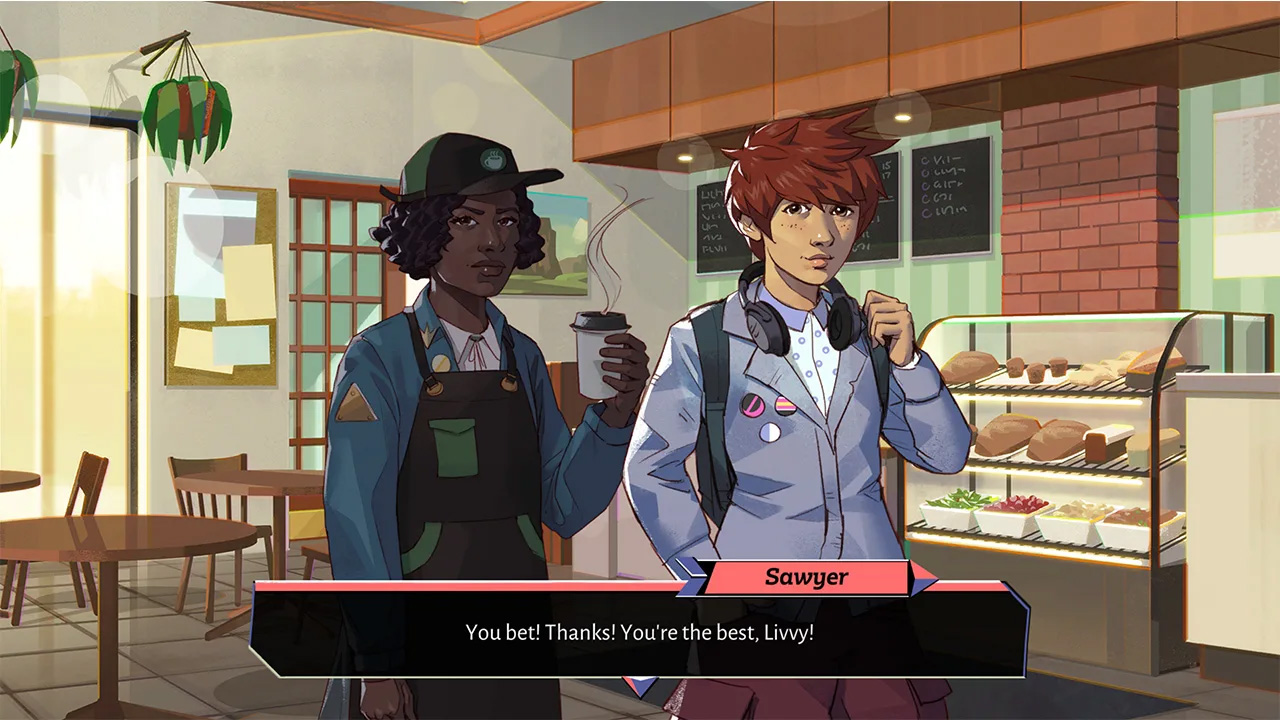 I feel more critical than the game deserves – as I said, the combat gets repetitive, but it’s honestly not a complete chore, and hanging out with the characters is never an outright bore. For how long I discussed Eric (mostly because he irritated me so much), the game suffers more from some hiccups in regards to its overall progression (where the “main plot” progresses separate of your attraction level, leading to scenes where a character will show up even though they’re supposed to be hospitalized) and a tragic brevity (there are only two dungeons in the whole game right now, each with about 13 floors. It doesn’t take terribly long to clear them and max out people’s affection). It just ends up feeling… shallow. Not stupid or empty, just… shallow.

It’s a shame, because there is the occasional moment where the game embraces a brief moment of absurdity (like Valeria’s searing hatred of ducks) or genuine emotional drama, but it lacks the momentum to embrace either. In many ways, Boyfriend Dungeon is a game that tries to chase two rabbits and loses both. While there’s more content on the way to beef things up, I’m not sure how much I’m itching to return to Verona Beach anytime soon. Check, please. 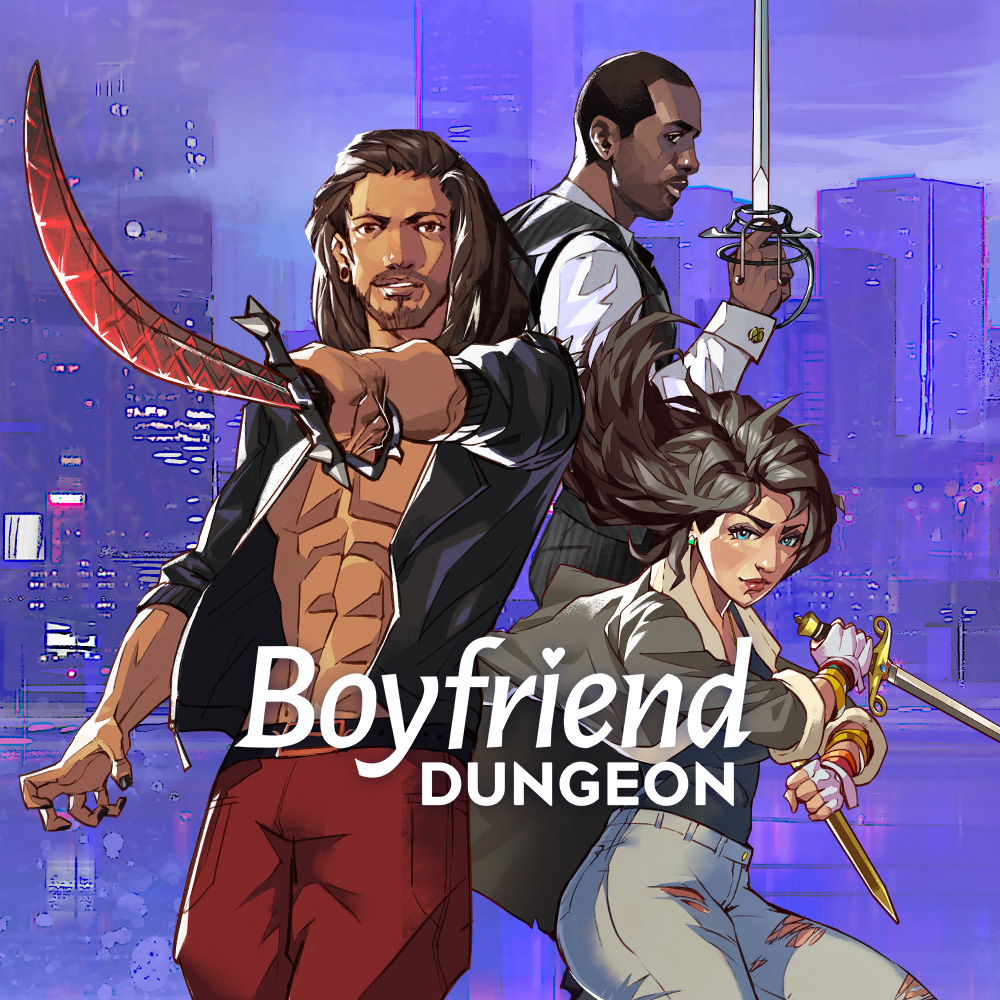