Masahiro Sakurai has released the latest video on his YouTube Channel, which chronicles his experiences directing Kirby Super Star for the SNES. The third and final 2D Kirby sidescroller he’d direct, the account is full of tidbits — from Shigeru Miyamoto asking him to implement multiplayer, which indirectly led to the creation of now-iconic Kirby hats, to the usage of CG backgrounds (which Sakurai doesn’t seem too happy with in retrospect). But the most interesting note is the game’s extra scenario cut during development.

An RPG horror style setup (at a time when such games were quite niche) titled “Kagero Mansion,” the sub-game story would consist of Kirby following a butterfly into a deep, dark forest — where he’s put under a curse that shuts his mouth, leaving him unable to float, inhale, or ingest enemies! Kirby must make his way through the mansion of a late wizard whose wall clock is the one who cursed him. It appeared that, to make his way through the mansion, Kirby would use various items inspired by/based on copy abilities. Presumably part of the reason it was cut was the concept was slightly similar to two preexisting scenarios, Great Cave Offensive (an adventurous Metroid-style treasure hunt) and Milky Way Wishes (where you had to find Copy Ability statues and then could use them indefinitely). 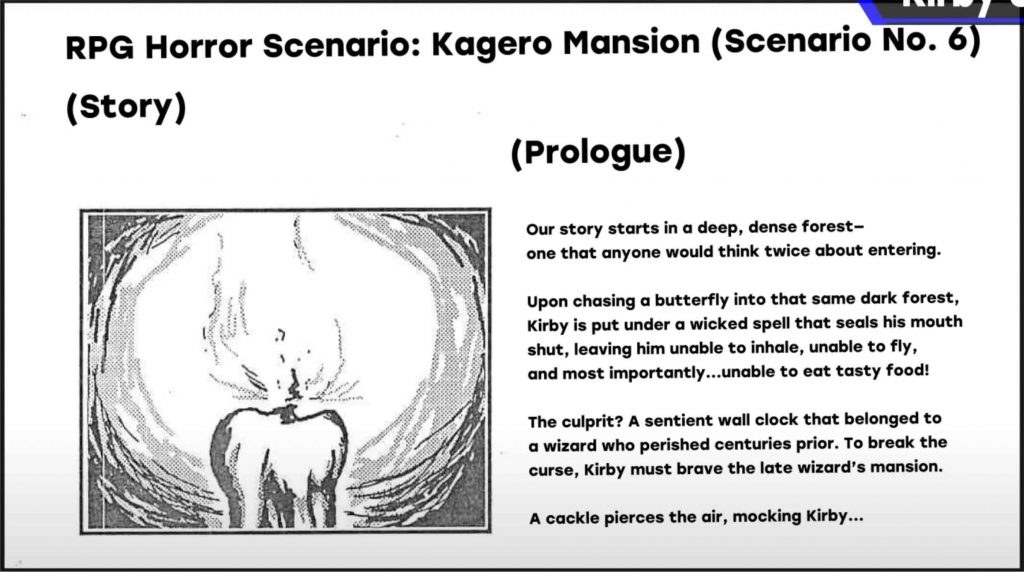 Still, it’s a really neat idea, and it’s a shame that it got cut. We would’ve loved to see something spookier in Kirby’s SNES outing. Appropriate of Sakurai to reveal it during the month of October. Make sure to subscribe to his channel for more advice and anecdotes.