A Short Hike goes physical thanks to Super Rare Games

Yesterday it was A Short Hike’s 2nd anniversary on Nintendo Switch. What’s a better way than to celebrate it by taking this digitally released game and make not one, but two limited physical edition runs for it?

Super Rare Games announced today that this charming indie title is their next physical game release. You don’t have to wait too long for it to, as orders open next week!

Follow the marked trails or explore the backcountry as you make your way to the summit. Along the way, meet other hikers, discover hidden treasures, and take in the world around you.

• Explore the island any way you like. Choose your own path to follow and see where it leads you. You never know what you might stumble into!
• Hike at your own pace – there’s no need to rush to the summit! Take your time fishing along the river banks or swimming by the lakeshore.
• Collect hidden treasures to reach new heights. Try taking a dive off the mountain peaks to soar above the forests.
• Chat with the other hikers you meet along your route. You might be able to help each other out!
• Listen to a lush original soundtrack by Mark Sparling that progresses dynamically as you explore the wilderness. 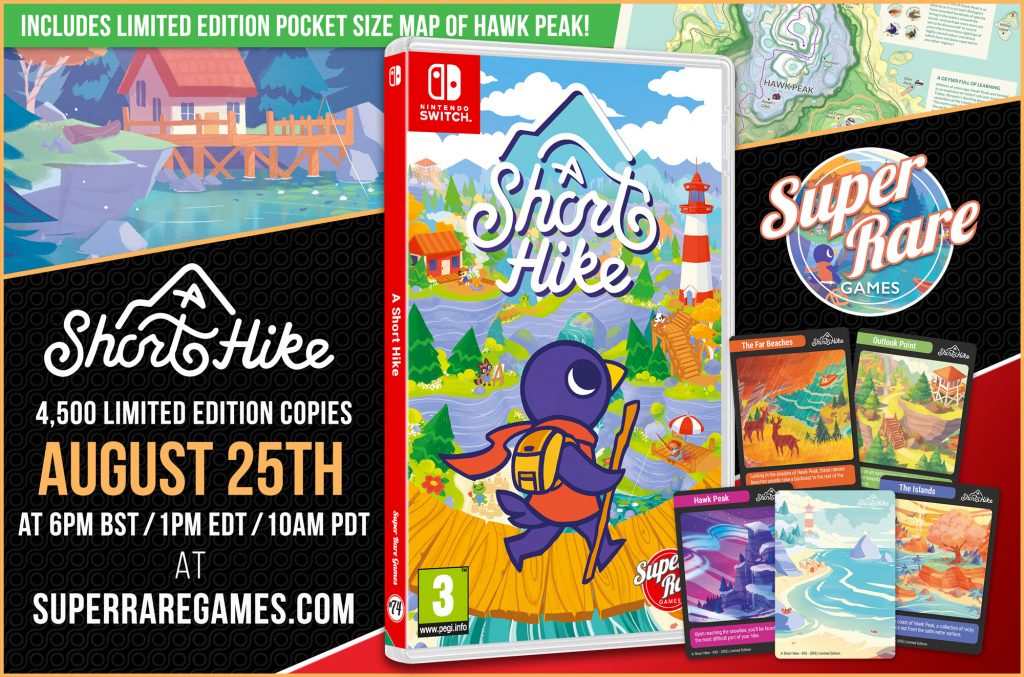 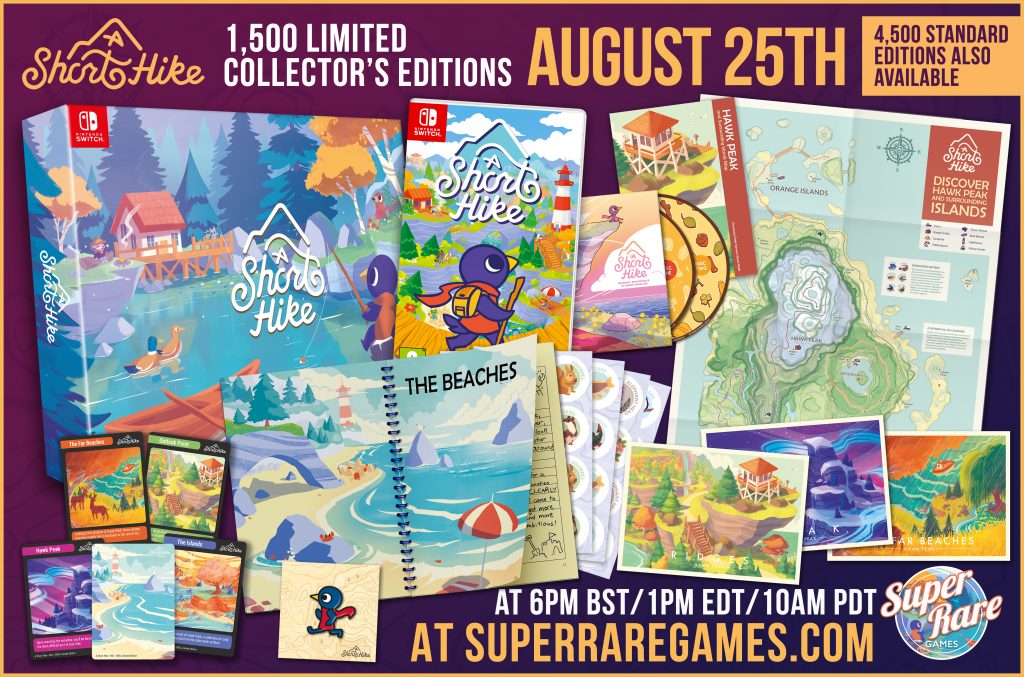 In total there are 6,000 copies split between the Standard and Collector’s Editions. The Standard Edition (4,500 copies available and priced at $35.69) includes the current version of A Short Hike on a physical cart in a physical Nintendo Switch case with a full-color manual, 3-pack of trading cards, an A5-sized pocket-style mini-map, and an exclusive sticker.

As for the Collector’s Edition, you get everything included in the Standard Edition plus the following: a 46-page retro style guidebook of Hawk Peak, 4 sticker sheets of the Flora and Fauna found on Hawk Peak, a poster-size retro style fold-out map of Hawk Peak (all held together by a Short Hike Belly Band), a Claire pin badge, 3 postcards, and the beautiful OST composed by Mark Sparling. Its Collector’s Edition box that houses everything is pretty snazzy too! It’s priced at $93.98 and there will only be 1,500 copies available.

No matter which version you get, Super Rare Games limits sales of two copies per person. And, for fans that hope to get the entire set of trading cards, additional packs are also available for $2.97 each and are limited to 5 packs per person.

If you’re curious to see what a Super Rare Games release looks like, we reviewed their previously released run of Wytchwood. When it comes to standard editions, pretty much everything fits right inside the case!

To add A Short Hike to your physical Nintendo Switch collection, set an alarm for Thursday, August 25th at 10 a.m. PT | 1 p.m. ET. Once the editions sell out, that’s it. You’ll have to either get very lucky securing a copy on the second-hand market or just download the digital version via the Nintendo eShop.