As Final Fantasy protagonists go, X’s Tidus has a pretty bizarre design, which is saying something. Boasting a jacket with no shirt, mismatched gloves, and an unusual pair of dungarees, it’s quite the look. Thanks to a recent interview with Famitsu, translated by Siliconera, we may finally have an answer to that last decision, however. 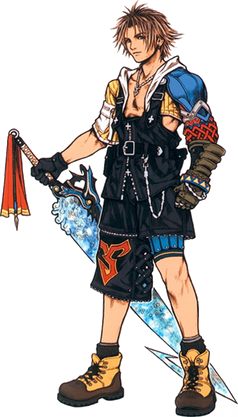 In the interview, Scenario Writer Kazushige Nojima mentions that Tidus’ initial inspiration was that of a plumber, which served as an excuse to get the character underwater. This focus remained in the final game, which features multiple underwater segments, but to set him apart even more Tidus was turned into the athletic star of the fictional watersport Blitzball.

It’s also mentioned that the stoic Auron was originally meant to be completely silent – something which changed later on in development, though he still has relatively few lines.

Elsewhere in the same issue, Nojima mentions that the focus of the story was always on Yuna’s journey, with Tidus and Jecht’s father-son relationship coming later. Supposedly the former was inspired by reading the diaries of Kamikaze Units from Imperial Japan, noting their resignation and determination in relation to their sacrifices.

Finally, producer Yoshinori Kitase mentions that he cried when playing the game for the first time, noting that he found Tidus and Jecht’s story more moving than Tidus and Yuna’s.

Final Fantasy X is available to purchase alongside its sequel on the Nintendo Switch.