Update (6/10/21): K.K. Slider is now available to purchase at Build-A-Bear! Both the Disco Song Bundle and the Opening Theme Music Bundle are available at the time of this writing.

The Animal Crossing: New Horizons collection at Build-A-Bear is getting a new plush! Teased back in April after the Isabelle and Tom Nook only debut, this mysterious next character is K.K. Slider! 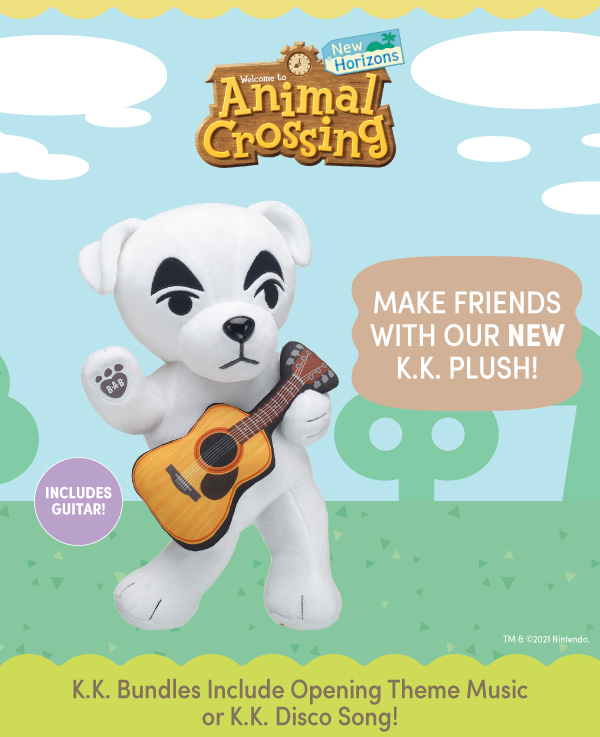 Same as Isabelle and Tom Nook, K.K. Slider will be available in two different bundles. He’ll come with a plush guitar, but he can strum to the beat of K.K. Disco or the Opening Theme Music of the game (which is also offered for Isabelle and Tom Nook). Sure, it’s not the fan-favorite Bubblegum K.K., but K.K. Disco is a catchy tune and an excellent choice for Build-A-Bear’s plush!

According to the e-mail sent by Build-A-Bear, to add K.K. Slider to your collection you’ll want to do the following on Thursday, June 10th (US site only):

No price point has been announced, but chances are it will be $51 (same as the Isabelle and Tom Nook bundles). Build-A-Bear has stated he’ll debut on their UK site “soon.” Don’t forget to add on any of the new accessories and sleeper pajama outfit that Build-A-Bear released late last month when you pick up K.K. Slider online!