SNK vs. Capcom: The Match of the Millenium may be on its way to Switch

SNK has been on a roll with NeoGeo Pocket Color releases, bringing entries in some of its most notable series to the eShop in this style that’s retro, unique, and kind of adorable. Now we may have just learned which game of handhelds past will be available next, and it’s something I’ve been waiting for for some time now.

As reported by Gematsu, SNK vs. Capcom: The Match of the Millenium has been rated for a Switch release in Korea. Ratings, like store listings, aren’t always the most accurate metric of game releases but this would definitely fit in with the previous NeoGeo Pocket Color Selection titles. 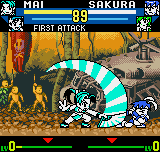 This is extra notable due to the Capcom ties, as none of the previous SNK vs. Capcom crossovers have seen re-release recently. If this paves the way for more Card Fighters, or even some sort of new release, then I’m there before you can say ‘Are you okay?’