We’ve known for a while now about Monster Hunter Rise’s Kamura Village. The new player hub will serve as every Hunters’ base of operations, as well as be the focal point for the game’s story about the mysterious Rampage. Thanks to today’s Monster Hunter Digital Event, we now know a whole lot more about the village’s characters, amenities, and features. Check out all the details below! 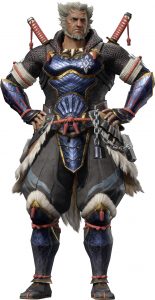 “Fugen is the big-hearted and experienced village elder who is a certified longsword wielder, and was formerly known as one of the greatest Hunters through the land. He an unwavering rock for the rest of the village, and makes sure his people are encouraged in spite of the Rampage.”

“Minoto and Hinoa are Wyverian Twins who serve as the Village Quest and Hub Quest maidens respectively. They are beloved in Kamura Village, and their songs bring peace to the hearts of the villagers. Minoto is quiet of demeanor and diligent in her work, yet is very kind-hearted and can even be a bit clumsy at times. She has the utmost respect for her sister and secretly wishes to be more like her. She is also a budding painter. Hinoa is a ray of hope in the midst of the storm that is the Rampage, uplifting spirits throughout the village with her joyful attitude. She sees the main character as family and would do anything to help them. She’s also a big eater and can often be found at the Tea Shop stuffing her face full of Bunny Dango!” 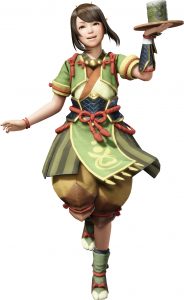 “Yomogi is a happy and upbeat young girl who runs the local Tea Shop. She’s a bit scatterbrained, but always gives her best effort to help Hunters with their missions. The Bunny Dango she makes is the village specialty, and is full of nutrients Hunters will need to stay strong while out hunting!” 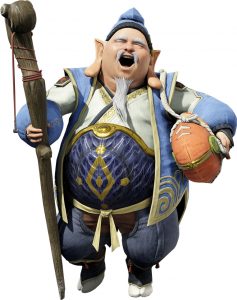 “Hojo is the oldest man in the village and serves as Kamura’s Guild Master. He manages all quest-related activities and even draws all of the quest notices that get posted on the quest board.”

“Master Utsushi leads all of the Hunters residing in the village, providing them with training and guidance from the very beginning of their journey. He handles arena quests and is skilled at mimicking monster calls and creating monster masks.” 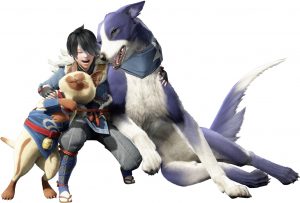 “Iori serves as the village’s Buddy Handler. He’s a kind and pure of heart young boy who adores Canynes and Felynes and is equally adored by them. He’s every Hunter’s go-to for the most well trained and reliable Buddies.”

“Hamon is the village’s Blacksmith and grandfather to Iori who hunted alongside Fugen in his younger days. He’s quiet and stubborn, but cares deeply for the village and its people. He spares no expense in crafting the gear he makes to ensure the safety of the village.”

“Kogarashi is the Felyne Chief of Kamura village, and formerly served as Fugen’s Palico before his retirement. He oversees the deployment of the Meowcenaries into the field on recon missions for monster materials and items. It’s said he could take on all of the village’s Felynes at once!” 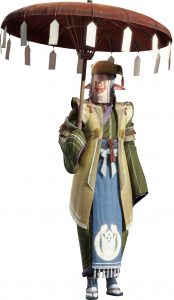 “Kagero is a mysterious merchant who covers his face with a strange cloth. His demeanor is peaceful and polite, and he does his part to help protect the village. He’s always got items to help Hunters better prepare for their hunts, and often holds sales and item lotteries. His lottery can also be entered up to three times per day with the use of amiibo.”

“Komitsu is known as the village sweet tooth, and quite lives up to her name by selling candy apples. She has an innocent and courageous personality, and wants to do her best to help the village.”

“Rondine is a Trader from a far-off country who came to Kamura to make trade with the villagers and Hunters. She has an elegant and refined demeanor that’s out of character for a simple merchant, and some who have spoken to her believe that she’s hiding something.” 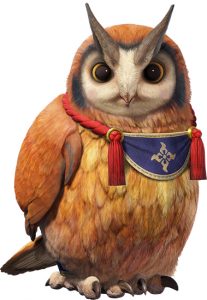 “Cohoot’s are both comforting companions for Hunters, as well as keen-eyed scouts that can pinpoint a monsters’ location while their masters are on the hunt. They’re a beloved pet among the people of Kamura Village, and can even be dressed up in different outfits!” 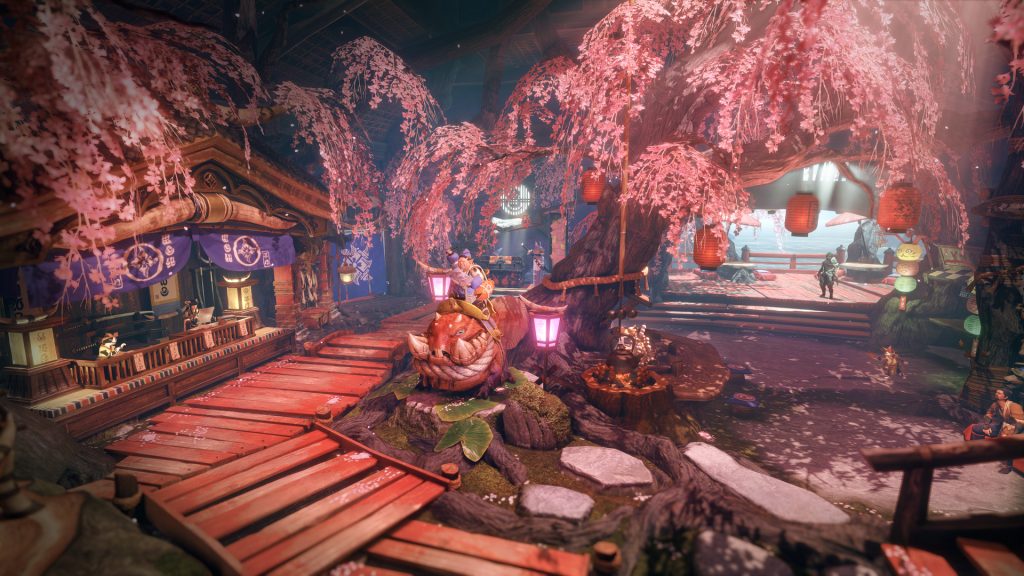 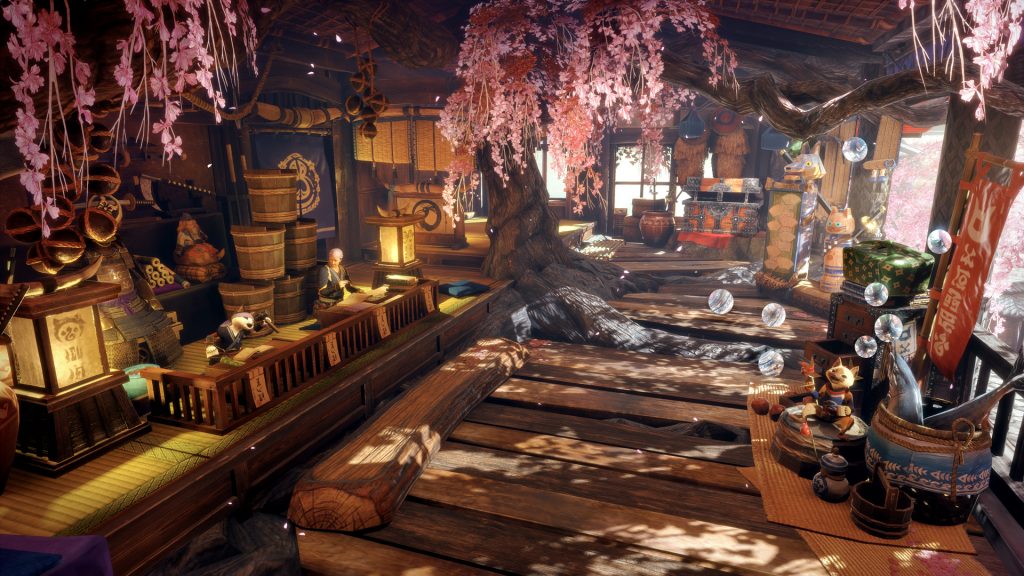 “The Gathering Hub is an extravagant common area containing amenities such as a canteen and market to support hunters on their missions. It’s also the place to go when it’s time to pick Hub or Arena Quests. The hub has a prep area which is home to even more useful facilities such as the smithy to forge and upgrade your gear. It’s also where Hunters can meet with their Housekeeper who will grant them access to the Meowcenaries and Argosy.” 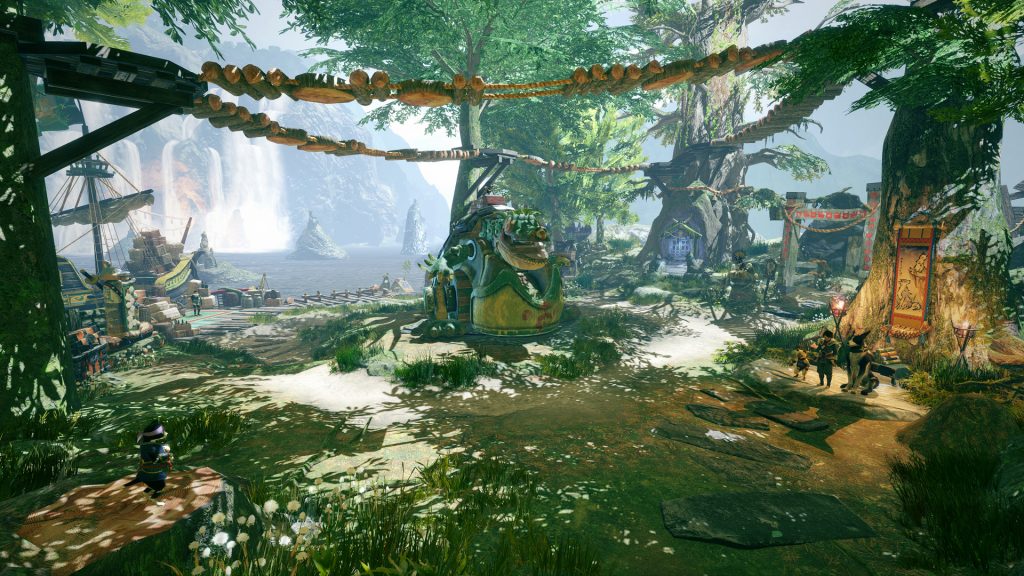 “The buddy plaza is the place to go for all of your Buddies’ needs. You can meet Iori and use his Buddy Scout services, as well as talk to Felyne Chief Kogarashi and deploy the Meowcenaries! The plaza overlooks a river that stretches down to the Training Area and Argosy, where Rondine has her Trader’s services situated.” 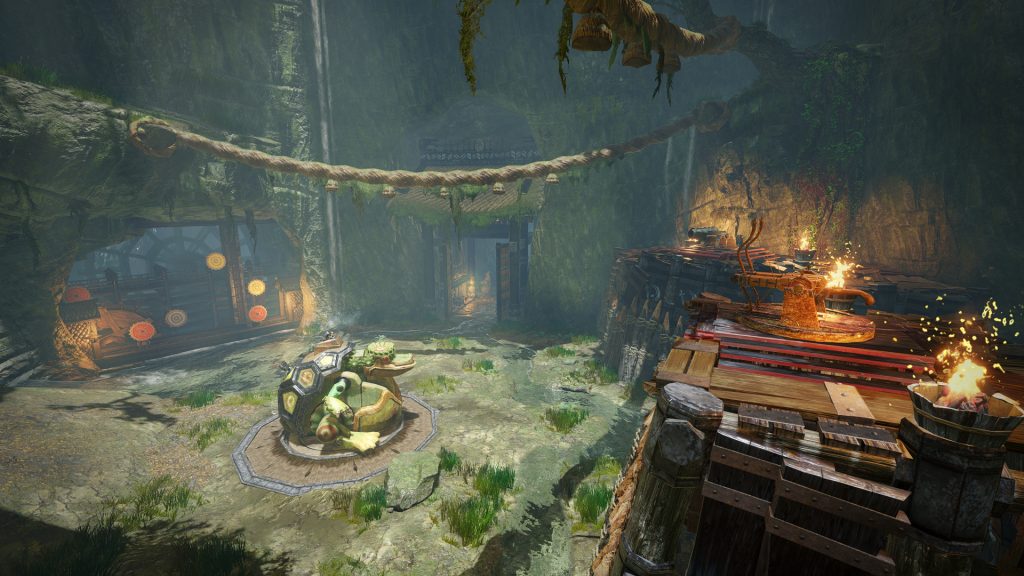 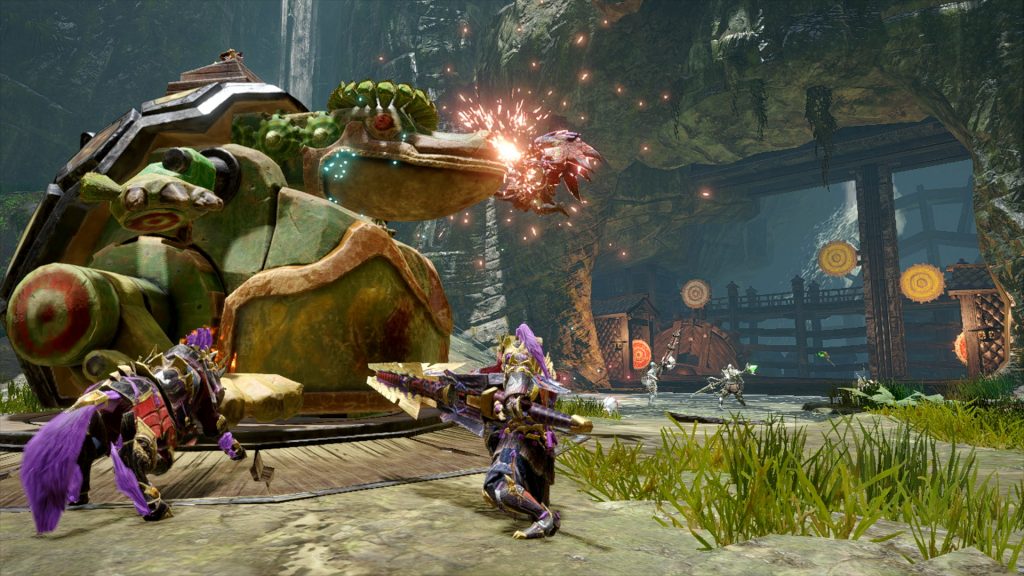 The training area allows you to hone your skills and practice new weapon types against a variety of targets whose behaviors can be adjusted to suit your needs. You can even train with fellow hunters! 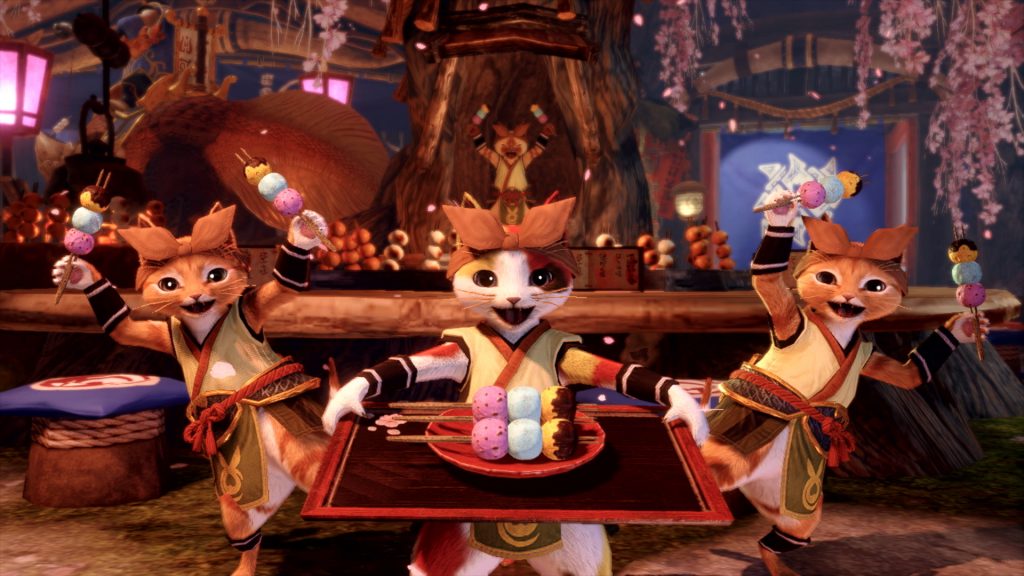 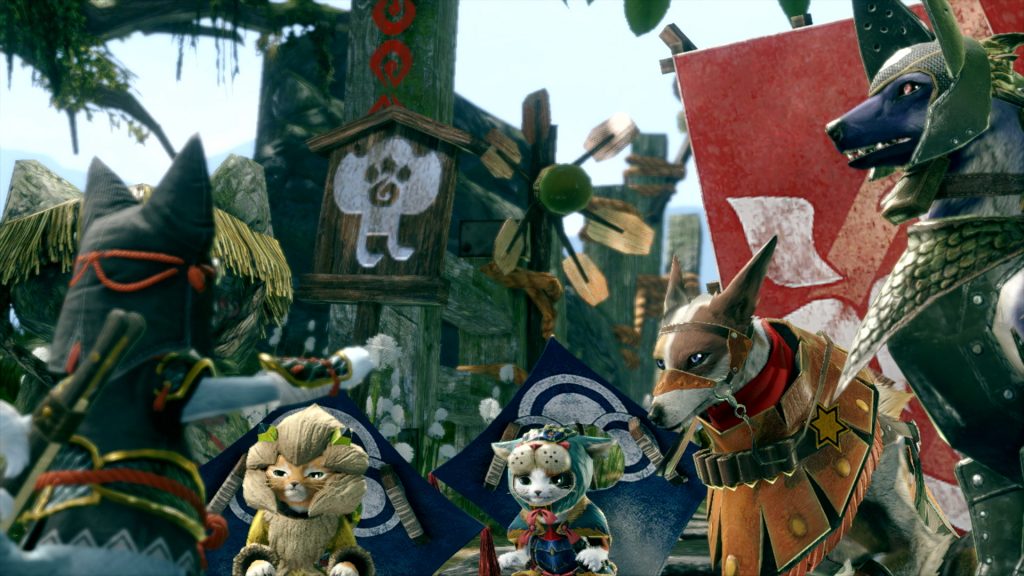 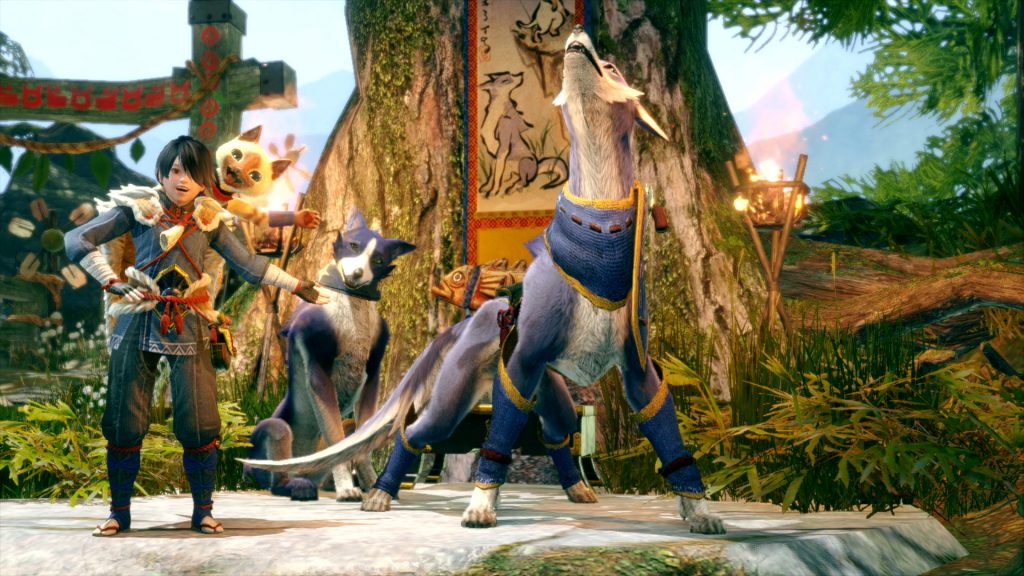 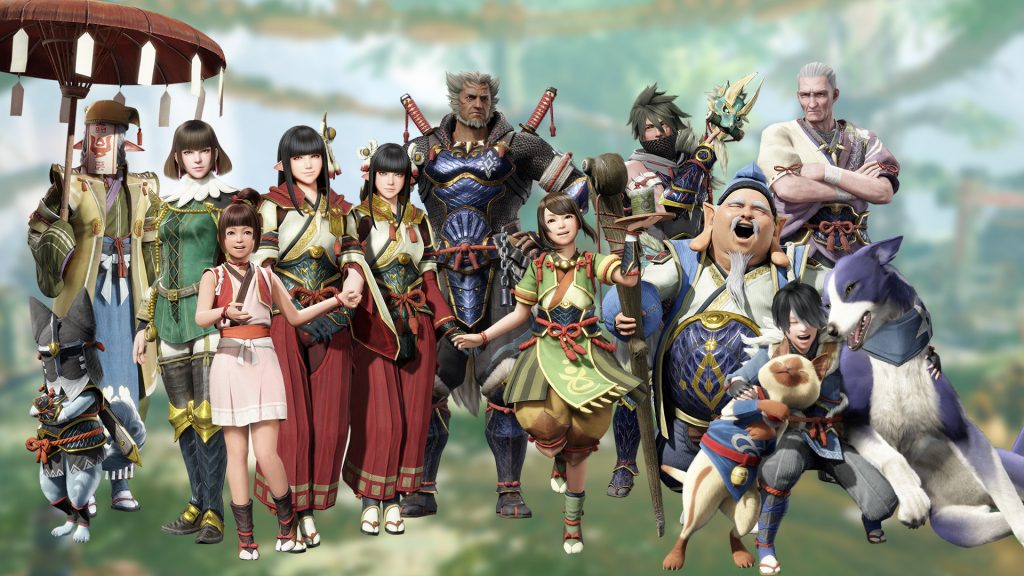 The villagers will help you in a variety of ways throughout your adventures and will be an indispensable asset against the Rampage.

Monster Hunter Rise releases on Friday, March 26th, and a demo will be available for a limited time starting later today!