It’s customary at this point for game developers to wish a happy new years, but Square Enix tends to pull out all the stops with new artwork. 2021 is no different, with two new pieces being commissioned for the occasion alongside a handful of messages from key members of staff.

For starters, the art. First up we have a new piece by Toshiyuki Itahana, the art director for various Crystal Chronicles titles, character designer for later entries in the Chocobo series, and various other roles throughout Square Enix history. Perhaps his most iconic role, however, is character designer for Final Fantasy IX, and that’s what’s at the forefront of this latest piece. 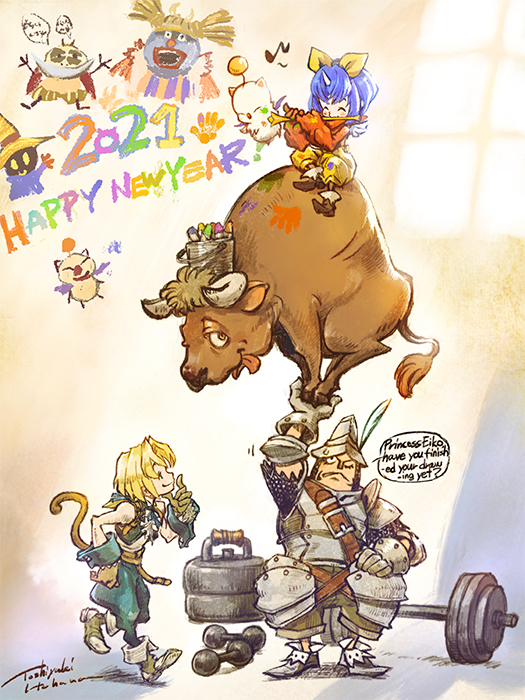 The ever-resolute Steiner is propping up the summoner Eiko on the back of an ox (2021 is the Year of the Ox, afterall), who has just finished drawing a variety of characters from the game alongside a New Years greeting. These include Vivi, Queen Brahne, two moogles, and even Oglop Cid. Main character Zidane smirks on, as he is wont to do. 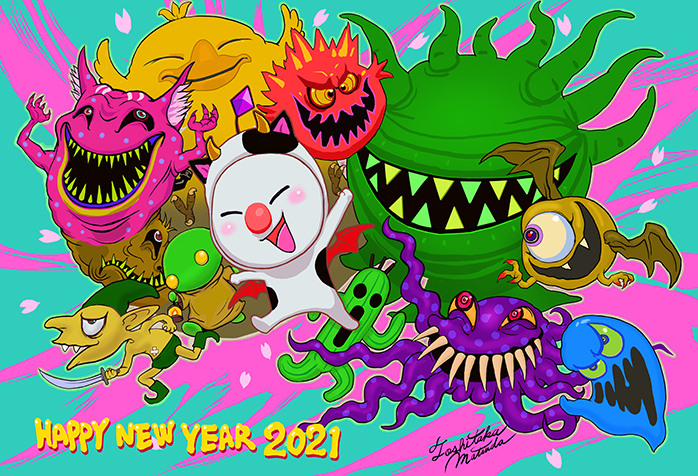 Finally there are all of the new year’s messages, though these are only available via translations at the moment, though Naoki Yoshida, the producer of Final Fantasy XIV and the upcoming Final Fantasy XVI, has shared a lengthier message. You can check the full thing on the Final Fantasy XIV blog, but below is a powerful excerpt aimed at the frontline healthcare workers during the ongoing COVID-19 pandemic:

“As the battle against COVID-19 rages on, one of the toughest jobs falls on our healthcare workers, who risk themselves on the frontlines to care for the infected and shield the rest of us from harm. Amongst the words of encouragement we received, there were many messages from these selfsame workers that were both heartfelt and heartbreaking:

“No matter how tough things get, I can always see my friends in FFXIV.”
“It gives me the strength to face the next day.”
“Please keep it up, we need this.”

If anyone should be grateful for something, it’s us. Thank you for everything you do.

You work under enormous stress, but despite all the sacrifices you make, some people still treat you with disrespect. And it’s unforgivable. Sometimes you must wonder why you work so hard when you encounter those who clearly don’t appreciate it. But you can’t carry the world on your shoulders. Our earnest comments may not affect you as keenly as one pointed and thoughtless remark, but know that you always have our gratitude and support. Allow me to offer you that, at the very least.”

Here’s hoping for even more Final Fantasy surprises in 2021 and beyond!