2020 Year in Review – Hyrule Warriors: Age of Calamity was filled with surprises

The pandemic-stricken 2020 was a strange year for everyone, Nintendo included. While the company released plenty of heavy-hitters over the course of the last twelve months, the game announcements themselves and their subsequent marketing pushes were very unusual, to say the least. Nowhere was this more apparent than with Hyrule Warriors: Age of Calamity, a game that surprised in more ways than one.

Hyrule Warriors: Age of Calamity’s first surprise came from its very existence. While most assumed Koei Tecmo was collaborating with Nintendo on another Warriors game following the success of the original Hyrule Warriors and Fire Emblem Warriors, few could have expected that the spin-off would be a prequel to the arguable Game of the Decade The Legend of Zelda: Breath of the Wild.

Even more shocking, its September 8th reveal came via a Twitter post/YouTube video and the game was confirmed to be launching just over two months later on November 20th. Needless to say, if you hadn’t realized traditional Nintendo Directs weren’t happening in 2020 by then, you certainly did after that bombshell. 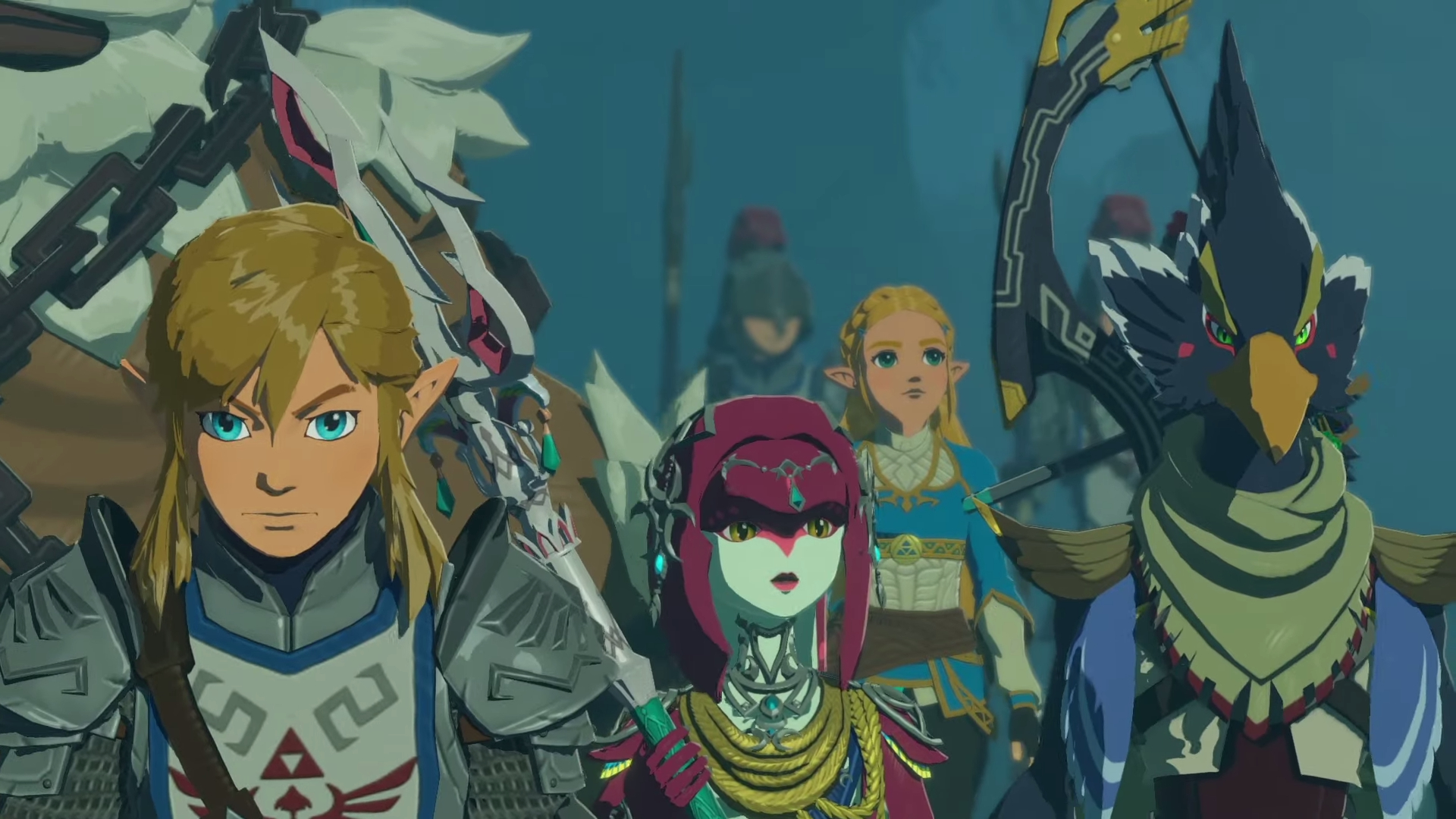 The next few weeks were filled with plenty of expected reveals – everyone figured the Champions would be playable – as well as a few more pleasant surprises, such as younger versions of Impa, Purah, and Robbie. Gameplay was shown, highlighting how the traditional Warriors gameplay was being blended with Breath of the Wild’s more open approach, and fans were gearing up to experience a story that explored the Calamity that ravaged the world 100 years before Breath of the Wild…

Needless to say we’re going to delve into some spoilers now, so if you haven’t played the game yet, be sure to check it out! 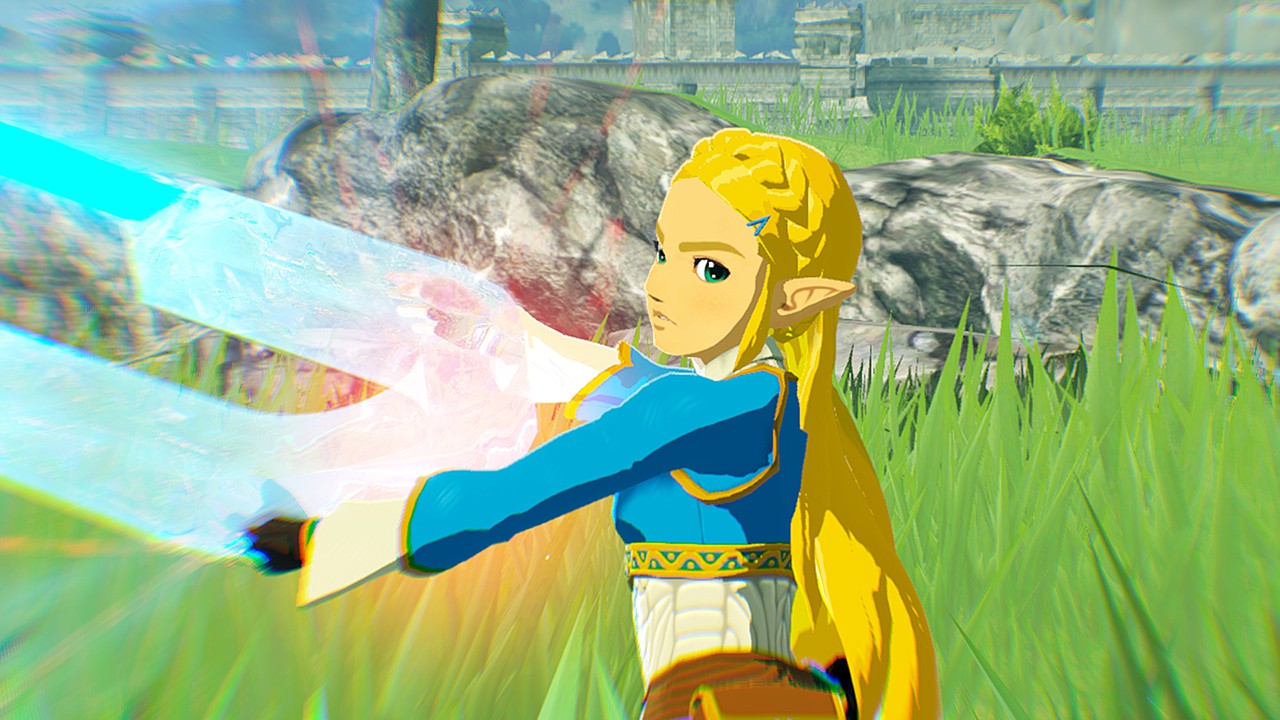 So, yeah, the story retelling the Calamity? That didn’t exactly happen. From the very first scenes of the game, which were also featured in the demo, we find out that it kicks off with time-travel. The miniature Guardian seen on the box is caught in the midst of the Calamity, and after sensing Zelda’s powers awakening miles away, he hops back in time, accompanied by some dark energy spawned from Calamity Ganon of the future-past.

This particular surprise was contentious to say the least. The established story teased throughout Breath of the Wild’s memories was effectively absent, and in its place characters were prepared to fight the oncoming storm armed with vague knowledge of what’s to come – aided by some handy-dandy Runes, unlocked a century before they should have been.

Yet, for many, this led to the strangest surprise of all – this change works.

Of course this isn’t true for everyone, but speaking personally, after coming to terms early on with the fact I wouldn’t be witnessing things play out exactly as expected, I buckled in for a wild ride. The desperation of Breath of the Wild’s memories, where countless soldiers presumably die off-screen and the noble champions are cut down in their corrupted Divine Beasts, wouldn’t mesh well with the frenetic, overpowered gameplay of Warriors, and likewise the Runes are too solid a gameplay mechanic not to utilize. So, for the sake of fun, lightening the tone and allowing for all the fanservice was a sensible direction to go in.

And speaking of fanservice…

Champions of Past and Future

One of the most shocking moments in Age of Calamity comes during the aforementioned scene where the Champions are about to be cut down in their Divine Beasts by the Blight Ganon weapons. Out of nowhere, their descendents from Breath of the Wild’s modern day pop in, bringing four entirely unique playstyles and some very cute interactions. While I always figured they’d be playable in some form as part of a non-canon mode, I never expected Riju to be rolling into the main story, wreaking devastation with a leashed sandseal. 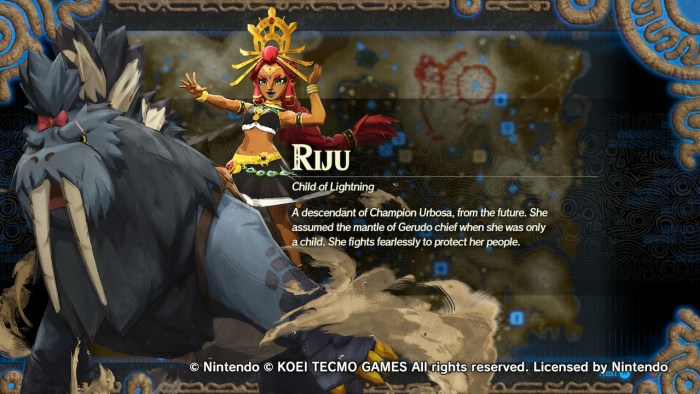 It’s this moment that cements Age of Calamity’s status as what essentially amounts to officially-endorsed fan-fiction, and while that can be understandably seen as disappointing to some, the game by that point had become so divorced from the original vibes of Breath of the Wild that I was ready for just about anything to happen.

And yet, despite all of the goofy overpowered shenanigans and the lighter tone, the game still manages to facilitate heartwarming moments, courtesy of a certain little Guardian called Terrako. 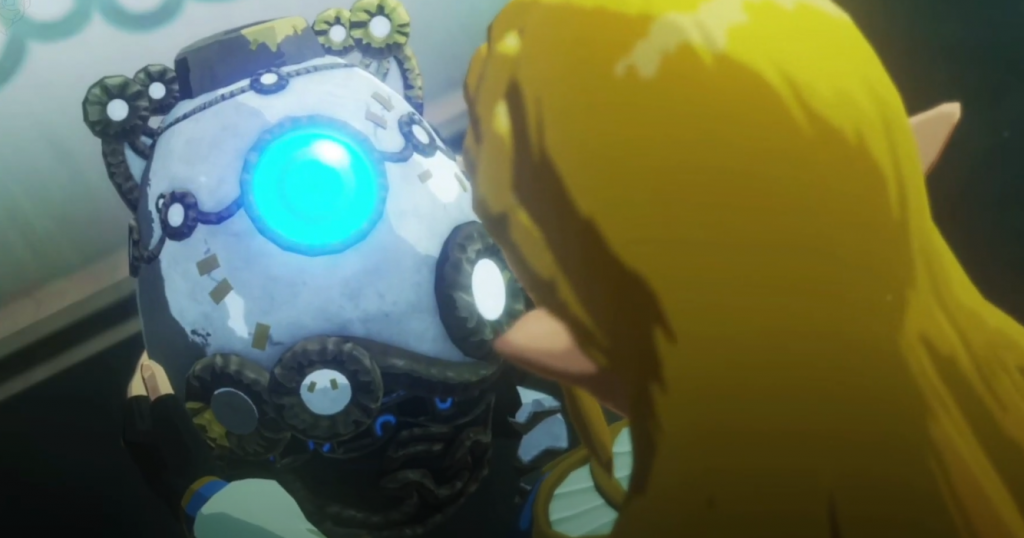 While most of Age of Calamity wildly diverges from what was already established, there are some aspects that are, presumably, still canon going into Breath of the Wild’s sequel, and that includes the droid built by Zelda and her mother when the former was still a child. The little guy gives Zelda some more backstory while also acting as a physical emotional anchor that helps make her struggle feel even more personal. And hey, he’s the reason we got our first look at an incarnation of Zelda’s mother, ableit very briefly.

Despite all of the above, this final surprise is what got me grinning. For years, Zelda fans had theorized about the series’ timeline, and it was eventually officially decided with the Hyrule Historia. Flash forward to Breath of the Wild, however, and it basically didn’t matter, with the game not exactly fitting within any established timeline specifically, featuring elements from each. At the very least, it was set 10,000 years after any of them thanks to some background lore establishing Calamity Ganon’s existence, so fundamentally speaking any of them would work.

Because of this refusal to fit in, I, and many others, assumed Nintendo was leaving the timeline stuff in the past. Then in strolled Age of Calamity with this infamous loading screen tip –

“When Terrako – pursued by Ganon’s Malice – arrived from the future, a new world was born.”

Zelda Timeline splits are back in full force, and who could have seen that coming?

So, here’s to more pleasant surprises from the Zelda series in 2021 and beyond!