Following up on its PC release announcement during The Game Awards, Team Meat’s long-awaited follow-up is finally ready to bleed into the world. Per today’s Indie World stream, Super Meat Boy Forever will come to Switch later this month as a console launch exclusive.

With thousands of levels to play through and millions of saws to avoid, #SuperMeatBoyForever will put your platforming skills to the ultimate test when it comes to #NintendoSwitch on Dec. 23! #IndieWorld pic.twitter.com/HtL1L6zWCA

With new maneuvers (you can PUNCH!) and randomly generated levels to contend with, it’s looking to be an impressive leap forward for the indie series. If you need further proof of that recognition, PowerA has announced a limited edition controller themed to the game to commemorate its launch. Now when you look away from all the buzzsaws on the screen, you can still see them in your hands. The controller is available to order from PowerA directly starting today and will be on Amazon starting tomorrow, December 16th. 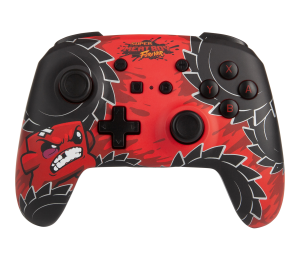 Jump, slide, and die thousands of times in this brutal precision platformer when it comes to the eShop on Wednesday, December 23rd.