The Crown Tundra has been available as part of the Pokémon Sword and Shield Expansion Pass for a few weeks now, and it’s likely fans have already encountered its biggest surprises. Now, though, these equines are galloping into the spotlight and getting a full reveal.

Stories in the Crown Tundra have that Calyrex, in its full power as the King of Bountiful Harvest, rode proudly atop a steed. Over the years the nature of that mount has fallen into myth, with some claiming it was a frigid white horse and others a ghastly black horse. On your journey through the Expansion, you’ll be able to influence the “truth” and choose your Legendary encounter. 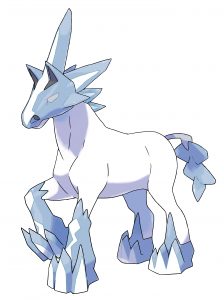 Glastrier is a physically powerful yet slow Ice Type, that emits freezing air from both its nose and its hooves. This causes them to freeze over, plating it in ice and giving it a unicorn-like mask. It comes equipped with the new Chilling Neigh ability, which functions like Moxie in that it gives Glastrier a boost to its Attack when it knocks out an opponent. 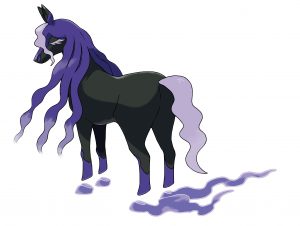 Spectrier on the other hand has powerful Special Attacks and is incredibly fast. This pure Ghost craves silence and solitude, leading it to be active at night to the point its eyesight has somewhat atrophied and its other senses have heightened. Its Grim Neigh ability matches Glastrier’s, though it boosts Special Attack instead. 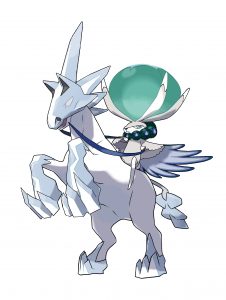 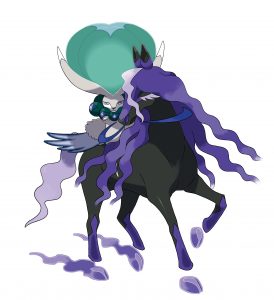 While they’re powerful on their own, both are only at their true potential when paired with Calyrex. By using the Reins of Unity Key Item the Crown Tundra’s main Pokémon can ride proudly with its partner, unlocking its true power. Ice Rider Calyrex and Shadow Rider Calyrex are “fusions” of these Pokémon similar to Black Kyurem and White Kyurem and adjust Calyrex’s typing to be a mix of Psychic and its horse’s type.

Even then these are extra unique in that they give them two abilities – Calyrex’s Unnerve and the horse’s signature Neigh. Called As One, it’s a fittingly unique privilege for a unique and regal Pokémon.