Summer comes to Overwatch as the 2020 Summer Games begin

It’s summertime here on the imaginary island of Nintendo Wire. The sun is shining bright in a clear blue sky as waves gently wash in and out along the shoreline. Wingull are swooping in low to grab what snacks they can before flapping away. There’s Super Mushroom kebabs roasting on the grill and ice-cold Kong banana smoothies in the cooler, so grab a sunhat, your favorite bathing suit and a pool floatie because it’s time for some fun in the digital sun!

The Overwatch Summer Games 2020 ship has docked and they’ve brought with them some amazing new cosmetics, fresh changes to spice up Lucioball, and three weeks of challenge rewards to unlock!

This year’s new summer skins are about as tropical as it gets. Some standouts are Echo with her surfboard wings and watery hair, with Pharah flying alongside her, dressed to the nines to save lives. Brigitte is looking like she’s ready to reel in the catch of the day, and am I the only one getting major Nook inc. vibes from Baptiste’s new skin? Most importantly though, Bastion is a sandcastle, his bird is a seagull, and Orisa is a big ol’ ice cream cone! 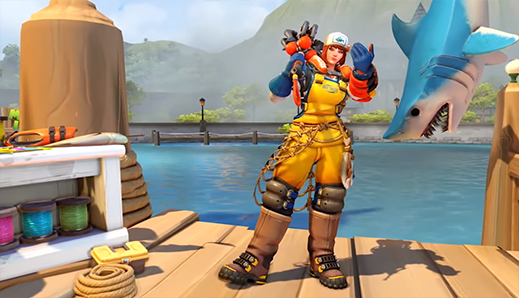 Lucioball has often been seen as the weakest of Overwatch’s seasonal modes, but this year’s offering is looking to change that! The Lucioball arenas have been changed to have all manner of bounce pads, pillars, and barrier walls to wall-ride on. Lucio has even been changed a bit mechanically to give the mode a speed boost. While playing Lucioball, his melee and boop have been given additional range, his base movement speed has increased, his cooldowns have been shortened and players can hit the crouch button while in midair to make him lunge to the ground.

If that wasn’t enough to get you to skate onto the pitch, a new version of the mode has been added called Lucioball Remix. In this mode, there are two balls in play, with golden bonus balls that are worth three points spawning in periodically to crank up the chaos!

Weekly challenges are back, with some pretty fantastic rewards! Each week features a spray, player icon and skin to unlock with every three wins in Quick Play, Competitive Play or the Arcade. Week one is Tracer themed, with nine wins netting players her Olympian-esque skin. Week two is all about Bastion, with the ultimate reward being his incredible sandcastle skin. Week three features Orisa and her delicious-looking ice cream cone skin as the final prize.

Now if you’ll excuse me, I have some waves to catch and skins to unlock! Aloha, and other tropical summery goodbyes!