Next year marks the 20th anniversary of the Mega Man Battle Network series, if you can believe it. Originally released worldwide throughout 2001, Battle Network took a totally different approach to the blue bomber. Instead of being about robots and featuring 2D platforming action, it instead focused on the digital world, with main character Lan helping MegaMan.EXE fight in unique active RPG battles. 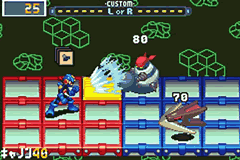 It turns out Capcom isn’t letting the anniversary pass without celebration, either. On the official Japanese licensing webpage for Mega Man, Capcom is recruiting licensing partners to celebrate the anniversary of the game (which is known as Battle Network Rockman EXE in the region). As Rockman Corner points out, Capcom previously held similar recruitment for Mega Man X’s 25th anniversary, which ultimately included the release of the Mega Man X Legacy Collections. That said, said recruitment also included Battle Network’s 15th anniversary, and we got no new games for it then, so don’t get too excited.

We’ll be sure to let you know just what products are unveiled as we head towards the anniversary year!