Even in a world where the Smash Bros. roster will at pass at least 80 characters and there’s seemingly nothing Capcom can’t Versus, SNK still stands as a legend in the world of intercompany crossovers. The King of Fighters is the leading force there, but in SNK’s history there have been other efforts that stand out for reasons beyond sheer numbers. Among them is SNK Gals’ Fighters on the Neo Geo Pocket, a small but satisfying affair on a small but satisfying system.

As the name implies, Gals’ Fighters sports an all-female roster from the likes of Fatal Fury, Samurai Shodown, and beyond. Unlike the more recent and gratuitous SNK Heroines: Tag Team Frenzy, this aspect isn’t played up in any respect save for some terminology and items. Instead, the driving force here is the cute presentation, which is propped up by both the more simplified (and at times comical) take on the characters, and the limitations and choices of the original hardware. 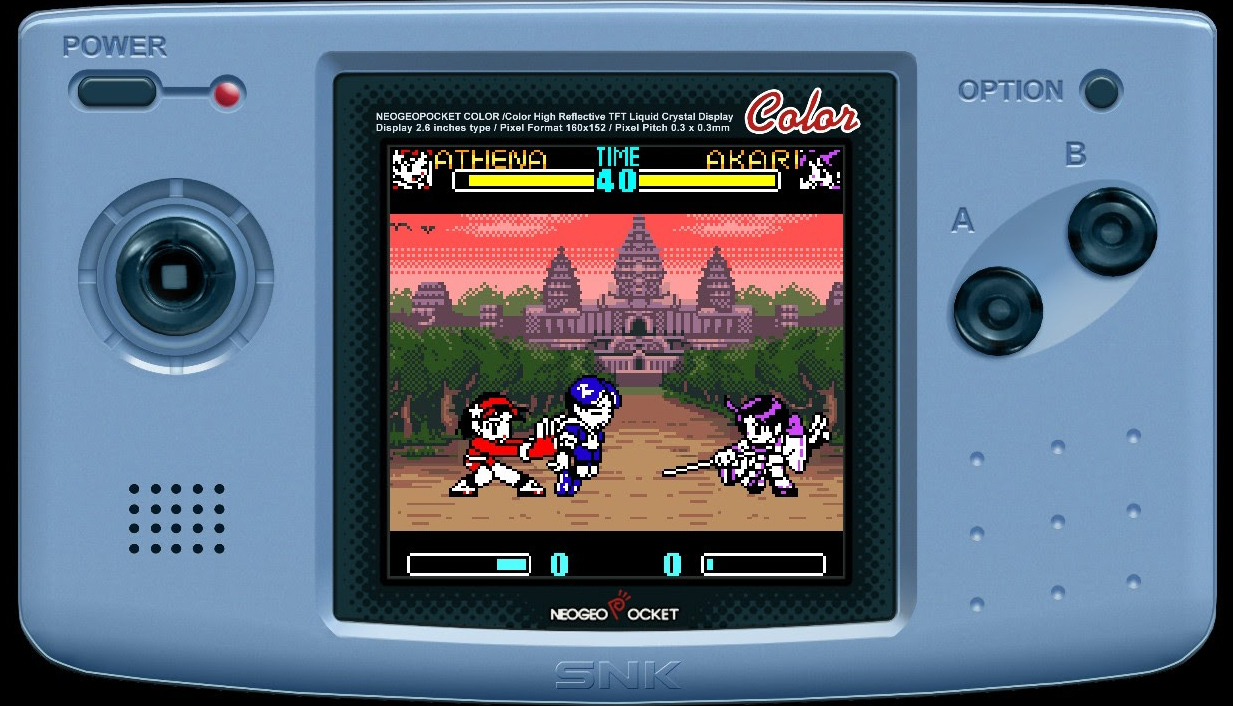 Playing through the game’s arcade mode with Nakoruru, I was surprised at the amount of depth SNK managed to work into a handheld game. While it doesn’t have any truly intricate systems, there are familiar special and super (here called Mighty Bops! The best name!), rolls and throws as additional movement and offensive options, and character-specific Pretty Bursts. The characters come with their familiar techniques and looks (Shermie is still a grappler, Mai is still Mai), though their personalities are more exaggerated.

Most of my experiences with handheld fighting games come off feeling stripped down or limited, yet Gals’ Fighters avoids that and carries itself well. It’s a little on the slow side and is lacking when it comes to modes, but there are combos to be found with the whole cast and fun to be had with its premise. The mysterious Miss X who is definitely not Iori Yagami is holding a Queen of Fighters tournament — whoever wins receives the wish granting K Talisman. That’s all there is to it, though each girl has their own motivation and ending, ranging from simple to silly. 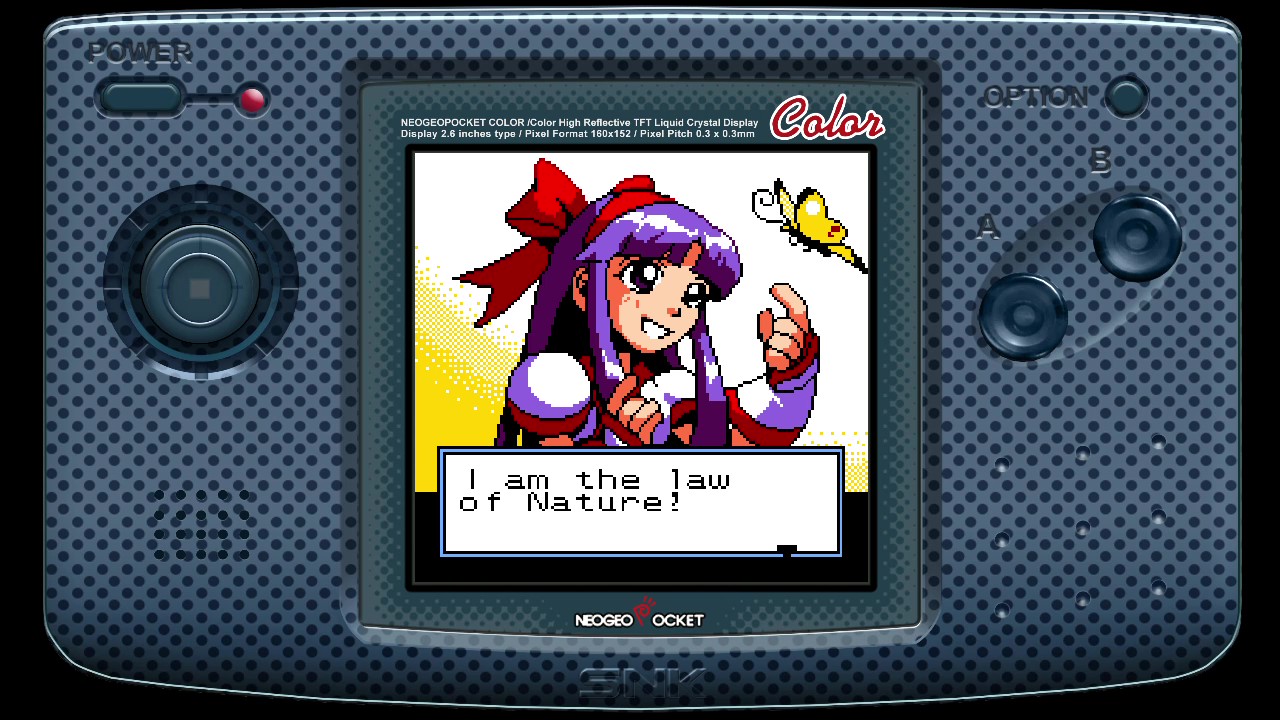 While the game itself is plenty fun, other than clearing arcade with each character and a few unlockables you’ll get along the way, there’s not much longevity here, especially compared to more modern fighters. What makes this revival shine is how much it both embraces the Neo Geo Pocket Color past and the capabilities of the Nintendo Switch. The port itself runs great, with a fun display option that lets you change up what NGPC system you’re playing on, as well as a native rewind feature. Personally, I most enjoyed being able to flip through the game’s manual, both for movelists and original artwork.

Probably the best thing about this release, however, is the local multiplayer. Entering this mode will flip your screen to a vertical display and double it, letting you play head-to-head with someone else in handheld mode without even having to disconnect the Joy-Con. There’s a novelty to it for sure, but it works great and is something I’d love to see more of. The Neo Geo Pocket may not have the largest library, but hopefully this (and the pre-order bonus only Samurai Shodown! 2) aren’t the only revivals we get in its trademark style. Bring on the Metal Slug and SNK vs. Capcom! 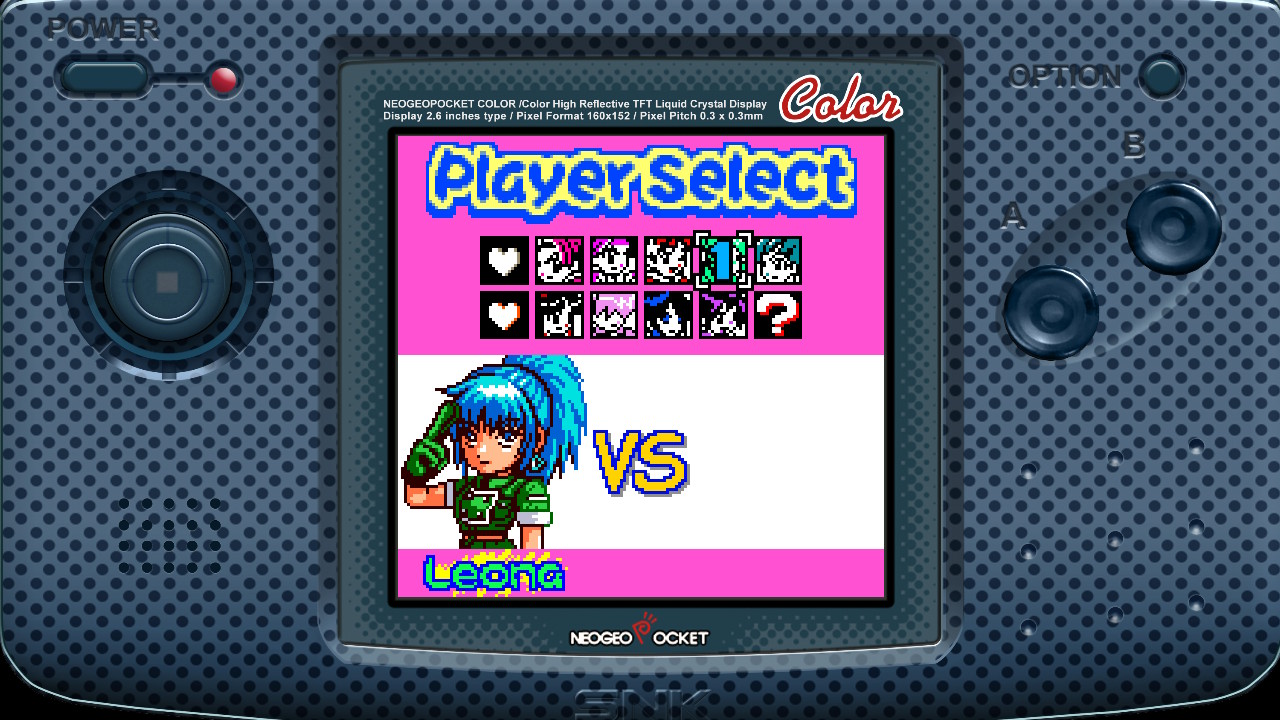 While the Switch’s very nature has made a handheld fighter less a concession and more an expectation, having a game like SNK Gals’ Fighters is a perfect way to remember this earlier niche. The game’s 20 years old and yet it still delivers and stands out, putting its female cast at the forefront and presenting a cute vibe without sacrificing the expected fighting quality. All the above, the fact this is a unique piece of SNK’s library, and the low price point make it absolutely worth picking up on Switch — especially if you’ve got someone nearby to play with.