Mid-budget and quirky Japanese games were a tier of gaming that disappeared for a while in the 2010’s, likely due to rising development costs and an audience that shifted its attention to mobile devices. Thankfully, the accessibility of tools like Unreal Engine 4 and the rebound of many players to systems like the PlayStation 4 and Nintendo Switch has given this “genre” something of a resurgence, and you need look no further than the revitalization of the Disaster Report franchise to see this return in action.

The last mainline title in the series was released for the PSP in 2009 and was never localized, meaning players in Europe and North America have been waiting 13 years for another disaster-filled survival adventure. For better or worse, Disaster Report 4 makes it feel like that decade-long wait never happened in the first place.

After starting up Disaster Report 4 and creating your character with rather limited customization options, you’re thrust into a survival situation after a powerful earthquake strikes a fictitious Japanese city that is quite clearly based on Tokyo. The game humorously gives you solid real-world advice — stay safe in an open area and don’t explore no matter what you do — and immediately encourages you to ignore it for the sake of gameplay. Soon enough, you’re running around inside crumbling buildings, helping out a variety of NPCs with incredibly basic goals that typically involve going from A-to-B while remembering to duck and cover if the aftershocks start kicking in. 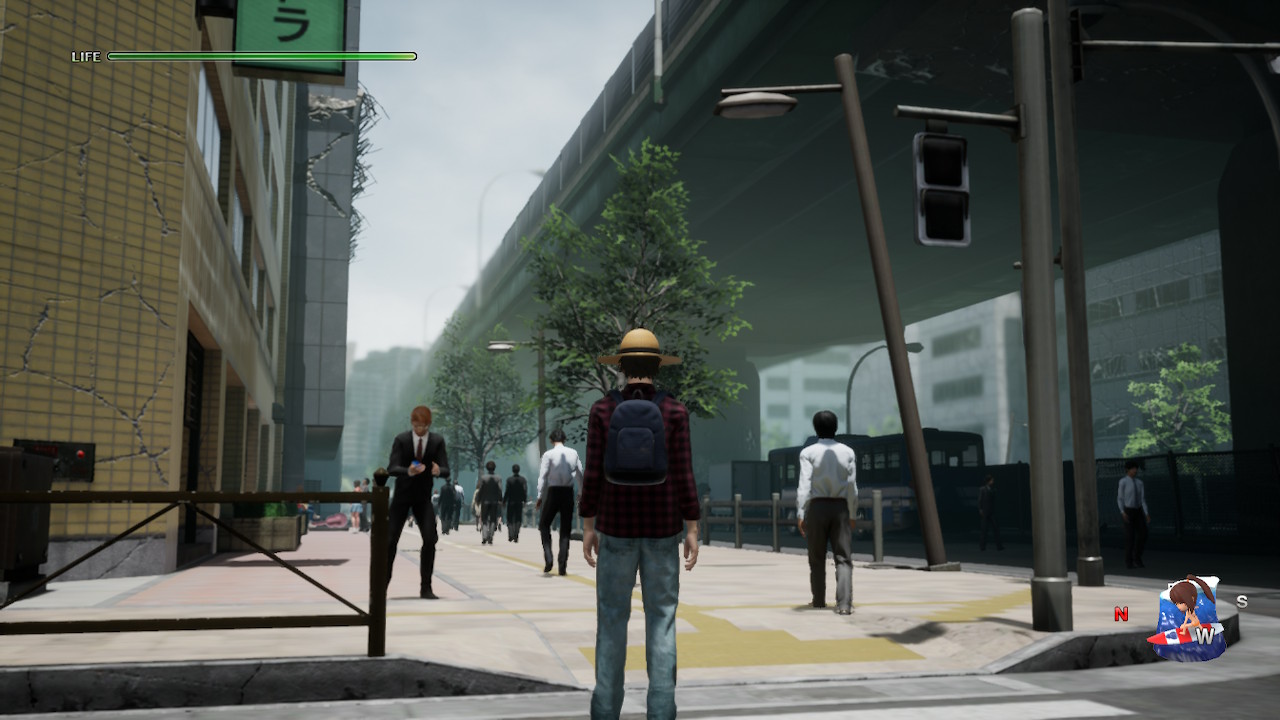 In terms of gameplay variety, Disaster Report 4 doesn’t offer much. While there are survival elements like food, water, and bladder to take care of, I never found myself going out of my way to tend to them. For the most part you’ll just be exploring the city to find the next location or NPC that’ll trigger the story to progress, all the while picking up outfits and compasses, both of which can either be sensibly designed or absolutely ridiculous.

There are a few flashes of interesting mechanics, such as driving a moped scooter or paddling a lifeboat, but they’re relatively short lived. For the most part you’ll be performing basic fetch quests and making your way through small but dense environments. 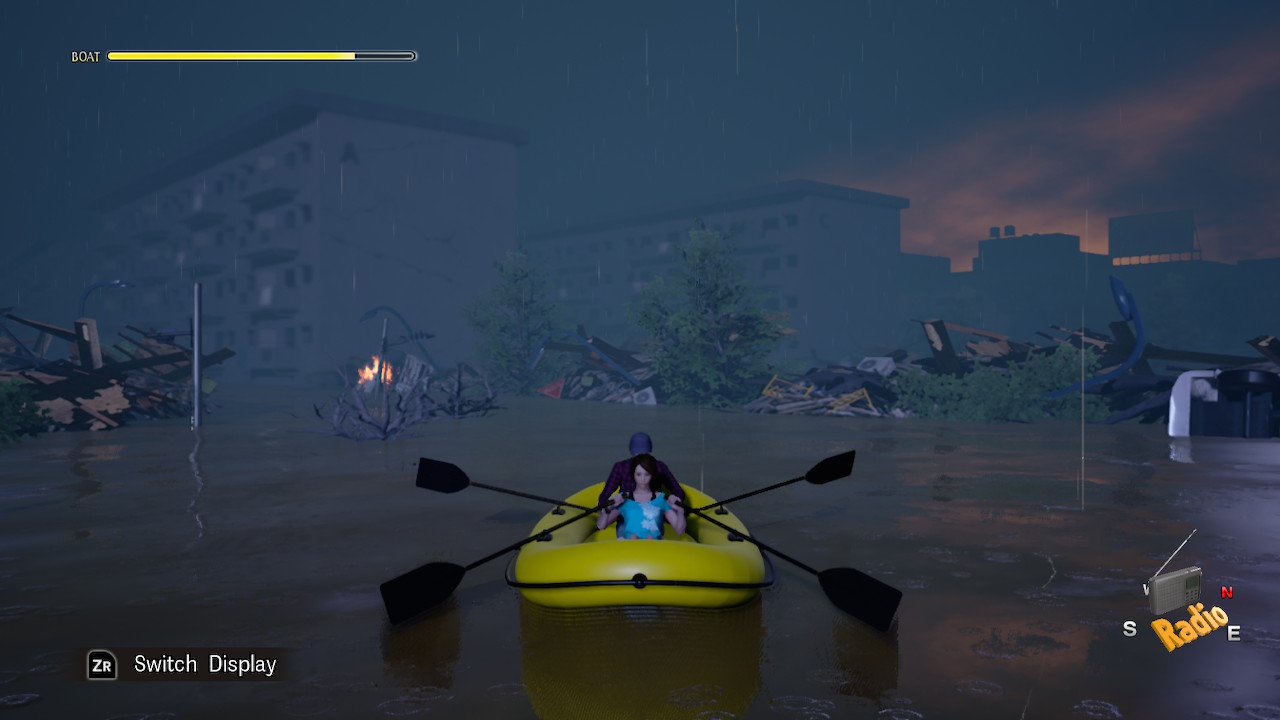 One particularly egregious chapter, however, focuses heavily on backtracking to a frustrating degree. In it, you must explore identical looking apartment buildings, where each room is separated by either lengthy animations or unskippable moments where you have to shimmy across ledges with barely any degree of challenge (unless you zone out from boredom and accidentally fall off). Thankfully, the segment is pretty much the only one of its kind in the entire game — for the most part the game is well-paced, taking you from one dramatic moment to the next at a good clip.

The greatest strength of Disaster Report 4 is its sense of atmosphere. This is something a lot of lower budgeted Japanese games nailed during the PS2 and GameCube era, where you had the likes of My Summer Vacation, Chulip, and Shadow of Memories capturing their settings in a well-realized manner regardless of whether the gameplay had a lot of substance.

As the subtitle suggests, Disaster Report 4 takes place in the summer, and it fittingly features sun-scorched streets, the trill of crickets, and even a few storms spawned by the humidity. Simply walking around the world and soaking it in is its own reward, and it’s telling how much effort went into making the environments seem real and lived in, even if it’s a little strange how few bodies you come across given the level of destruction. The bonus epilogue unlocked after beating the game takes this level of familiarity a step further, though saying more would only spoil the experience. 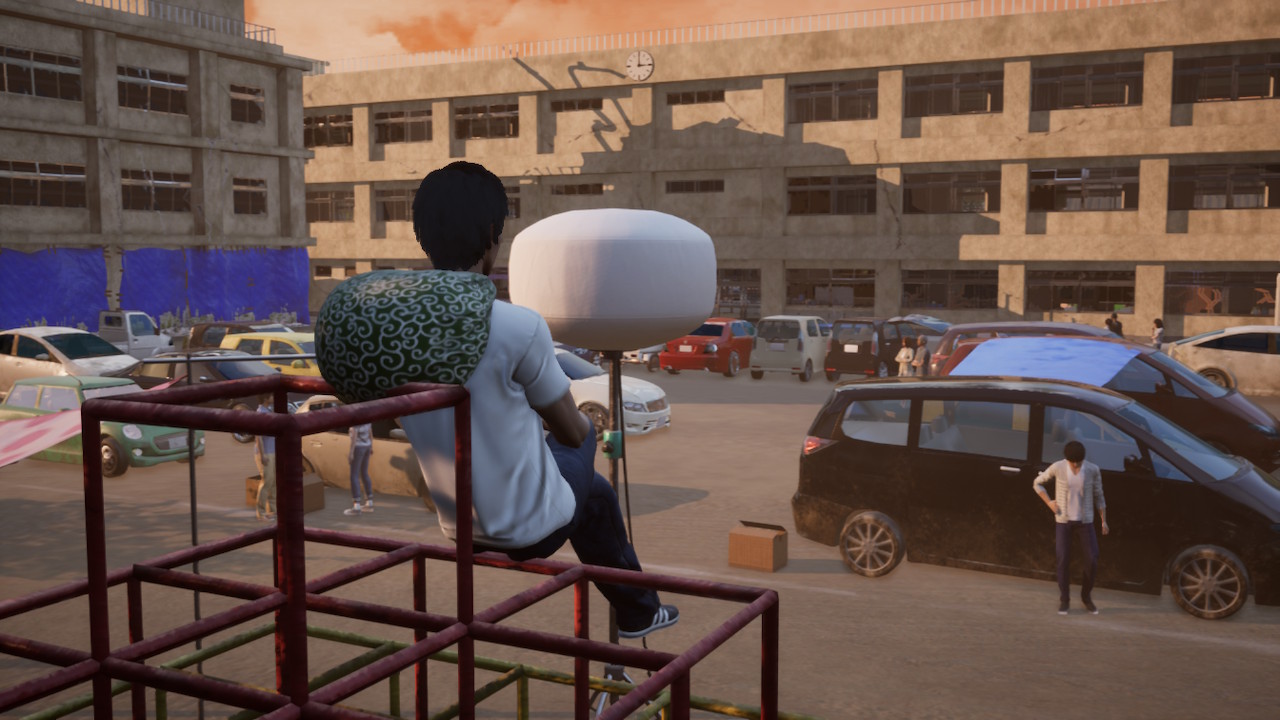 This is all backed up by a soundtrack that features multiple vocal tracks that try to capture the solemn beauty of destruction, which can really be effective if you let yourself be absorbed by the quiet moments of reflection.

Unfortunately, all of this is marred by the game’s performance on Switch. Like many Unreal Engine 4 titles on the system, it can struggle at times, and in general has a “fuzzy” aesthetic that can be distracting. In highly detailed areas even the least tech savvy player would notice the frame rate drops, not to mention the fact falling buildings turn the game into a slideshow, ruining their sense of impact.

One of the most jarring aspects about Disaster Report 4 is its tone, which is all over the place, to put it mildly. The game strives to put a human face to the realities of surviving through disasters, with emotional beats focusing on burglary, deception, arson, and more; while also tempting you with the ability to run around in silly costumes, equip bizarre-looking compasses, and even respond with fourth-wall breaking dialogue options.

While this works for the most part, giving you enough levity to prevent the game from becoming a depressing slog, it can also widely miss the mark. There’s a non-zero percent chance you’ll be consoling a woman who just endured sexual assault while your character is dressed up in a cowboy outfit and holding a compass that looks like a giant hamburger.

Disaster Report 4: Summer Memories is a blast from the past and anyone who fondly remembers those days of slightly awkward but well-meaning Japanese adventure games will be well served by its brand of quirkiness. For anyone else, it might prove just a little too archaic and limited. 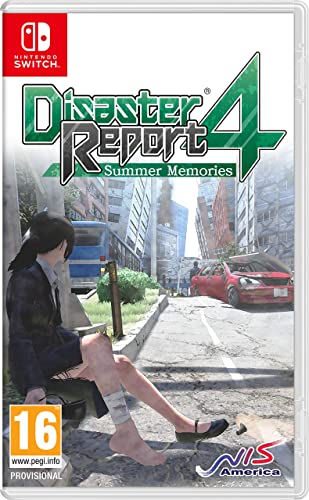