I’ve sung many, many praises of Night School Studios’ Oxenfree here on Nintendo Wire over the last few years. The story-driven game built on a natural-dialogue system had me enthralled from the get-go, so it’s no surprise that I’ve been eagerly looking forward to Night School’s followup, Afterparty, since it was announced. I’ll admit, the theme initially took me by surprise – drinking my way through Hell honestly didn’t feel like my cup of tea at first, but the vibrant neon visuals combined with a short soundtrack clip in the very first teaser had me hopeful that what seemed to be a departure from the low-key supernatural would at least be a strikingly stylish endeavor.

Milo and Lola are dead, which is a real bummer, since they’ve just graduated college. Lucky for them that means they’re free of whatever tens of thousands of dollars of student-loan debt they had coming their way. Thanks to the law of equivalent exchange (or karma, or just plain bad luck), however, there’s also a downside to being dead. You see, Milo and Lola’s death has landed them directly in Hell. From the beginning, the two childhood friends aren’t convinced they belong here, and can you blame them? If I ended up in Hell I’d probably be in denial at first, too. As they make their way through Hell’s intake process, Milo and Lola are dead-set on finding out two things: how they died, and how they can get back topside. 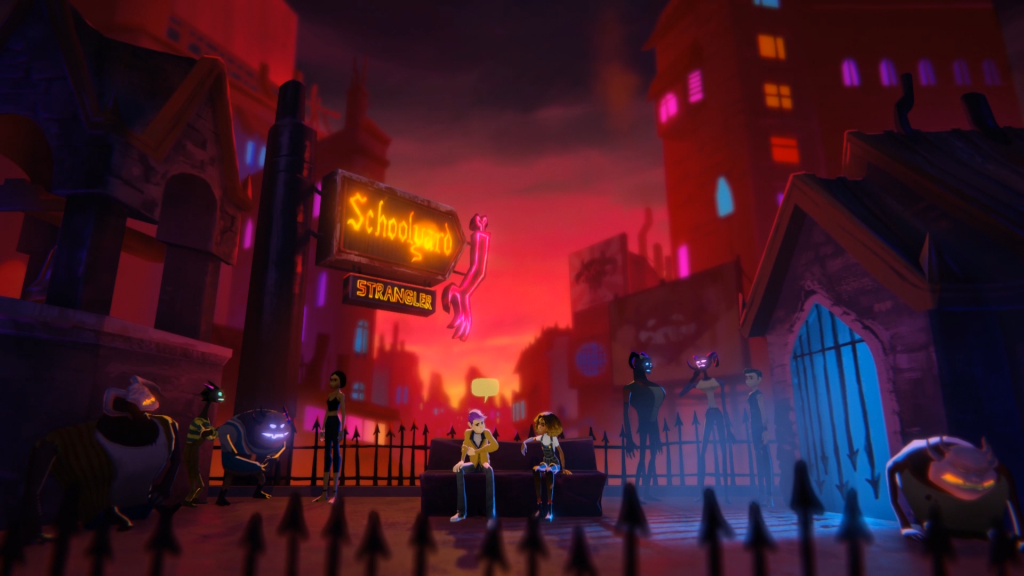 Just as they’re about to finish up their booking and find out how they met their untimely demise, the clock strikes 6:00 p.m. and all the demons clock out and go home, leaving Milo and Lola to explore the islands of Hell and party the night away. It’s thanks to Sam, a friendly demon cab driver, that the pair learn of a loophole that will get them out of Hell. If they can manage to out-drink the devil himself, they’ll be allowed to leave. As is usually the case with loopholes, however, this is easier said than done. To challenge Lucifer to the drinking contest of an after-lifetime, they’ll need to be invited to the super-exclusive party at his house, and the quest that follows will introduce Milo and Lola to an assortment of strange folks and even stranger brews.

Playing Afterparty, you’ll quickly realize that Milo and Lola’s night is about to revolve around drinking in a pretty big way, so of course there’s going to be a way for all that alcohol to affect gameplay. Much of the game takes place at different parties or bars, and there’s almost always somewhere to order drinks from. All of the drinks are either hellish or disgusting if not a mixture of both, and their effects on the two dead friends are profound. In a normal, sober conversation, you often have two options to pick from, but taking a sip of your drink opens up a third option based on the type of drink. Some drinks give you flirty options, while others bestow courage or grant options that would give the biggest jerks in Hell a run for their money. I personally enjoyed making a habit out of downing drinks that didn’t fit the situation in the slightest, often leading to hilarious results. It’s a mechanic that really gives some flexibility in how you want to handle conversations, and I relished the freedom of choice it presented me with throughout the game. 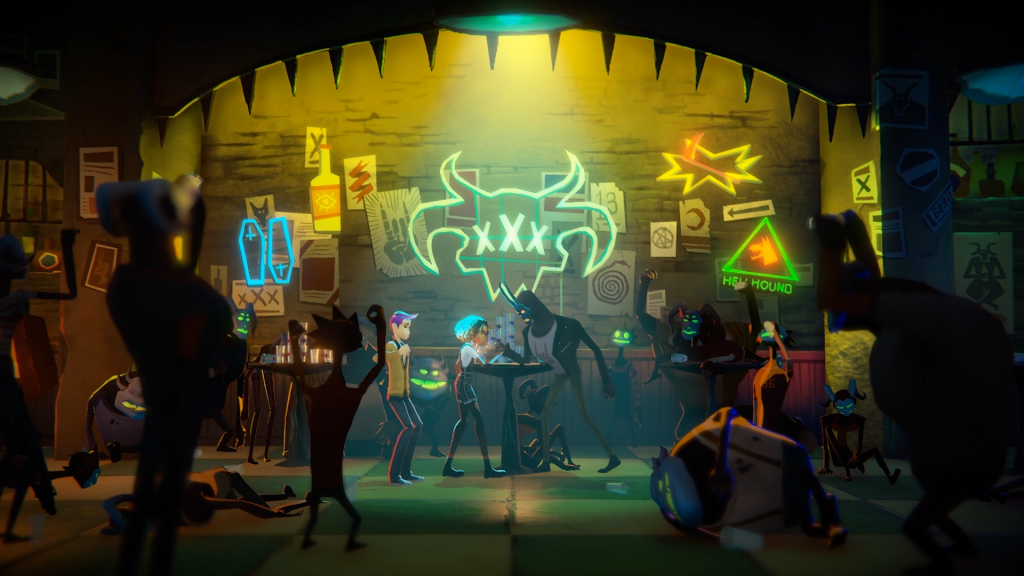 Also present in Afterparty are minigames, which ended up being a pleasantly surprising way to break up the steady pace of the conversation-driven gameplay. They were fairly simple affairs – beer-pong, cup stacking, and a dancing-based rhythm game, but they broke up the repetition of going from Point A to Point B pretty well.

Through Hell and Back

Afterparty’s story is fairly short, and would be even shorter if your quest wasn’t literally sending you through Hell and back. The backtracking to different parts of Hell is fairly monotonous, which was especially apparent each time I’d finish up an area and have to trek all the way back to Sam’s taxi in order to move on. I hate to admit this, but I often had to consciously will myself to continue partying my way through Hell, which is honestly a shame, considering how many parts of this game are very obviously lovingly crafted. The story seems pretty outlandish and humorous at first glance, but I found several story beats to be fairly dramatic and impactful. The writing is also home to some pretty spectacular and clever jokes that had me laughing out loud on more than one occasion, but other times I found the humor childish and cringy.

The voice work in this game is impeccable, and I cannot commend each of the voice actors enough for the phenomenal performances. Each line feels real and natural in a way you don’t often hear in games – there are stutters, realistically long pauses, and a wonderful range of emotions woven into every interaction. These interactions are made even more realistic by the player’s own ability to interrupt a conversation with a response, mimicking the impatient and often messy conversations people are likely to have in the real world, even when dealing with otherworldly themes like contracts of the sell-your-soul variety. 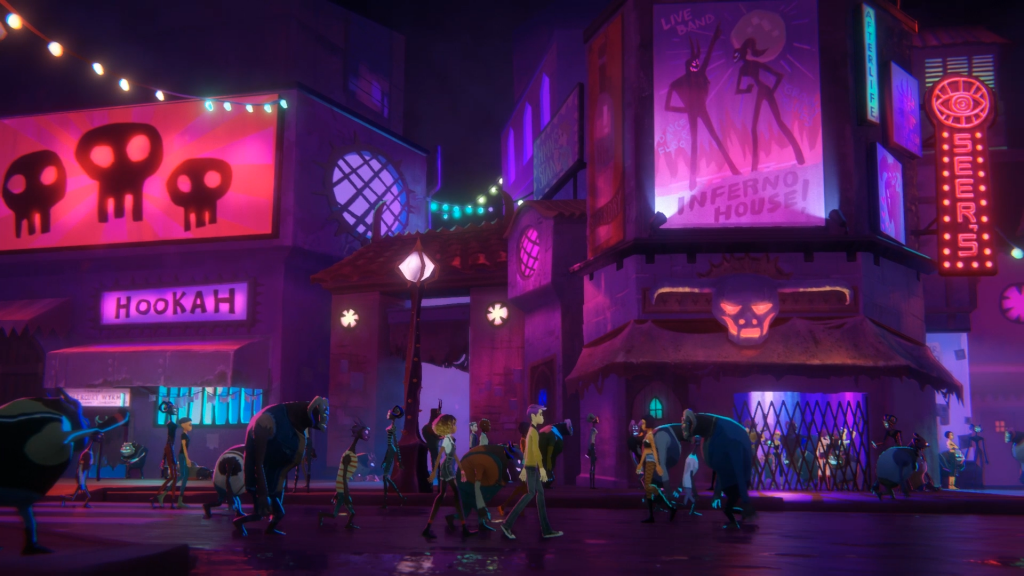 The designs that Night School Studio used for the various locations around Hell are sharp and striking. They’ve created a landscape where biblical imagery, steampunk lava-taxis, and neon-clad dive bars all feel right at home next to each other. The demons populating Hell, going about their nightly lives, don’t look out of place in this Mad-Lib Hellscape either; instead, their designs and personalities somehow pull the atmosphere together even more, ironically adding a bit of humanity to the whole thing.

Afterparty’s soundtrack is just as fitting as I’d hoped it’d be, ranging from upbeat party tunes to low-key indie rock, and even incorporating a few tracks that have a surprisingly effective mix of Gregorian chanting and electronic music. This soundtrack succeeds in setting the tone for Milo and Lola’s entire adventure without being too intrusive or missing a beat. This comes as no surprise to me, as the soundtrack was composed by scntfc, the sound designer for the Xbox 360’s system software, who was also responsible for the soundtracks of Oxenfree and The Old Man and the Sea, among plenty of other incredible work.

I wish I didn’t have to type this, but there were more than a few points where Afterparty really struggled to run on Switch. Every single scene taking place in Sam’s taxi while moving between Hell’s islands was prone to frame drops and stuttering, while there were more than a few times I had several-second freezes while traversing Hell’s landscapes on foot. In an unfortunate addition, the loading screens I ran into while starting up the game neared a minute-long, and moving from one room to another while inside of buildings often caused the game to hang for just a second, but it was usually a fairly noticeable second. Overall, the game runs okay, maybe better than okay at its best, but I’d be lying if I said it ran smoothly.

I wanted to love Afterparty, I really did, but in the end I think I loved the idea of it more than the execution. Don’t get me wrong, my favorite things about Afterparty were very, very well crafted: the soundtrack, the voice acting, and the way the biblical brimstone and bright neon visuals fit so well together all deserve plenty of praise. The story also had plenty of high points and several jokes that landed very well with me, but other jokes seemed overblown or childish and often had me either cringing or rolling my eyes. My biggest gripe was the undercurrent of monotony running throughout the whole experience, which was topped off with some technical difficulties, and that really took the experience down a notch. 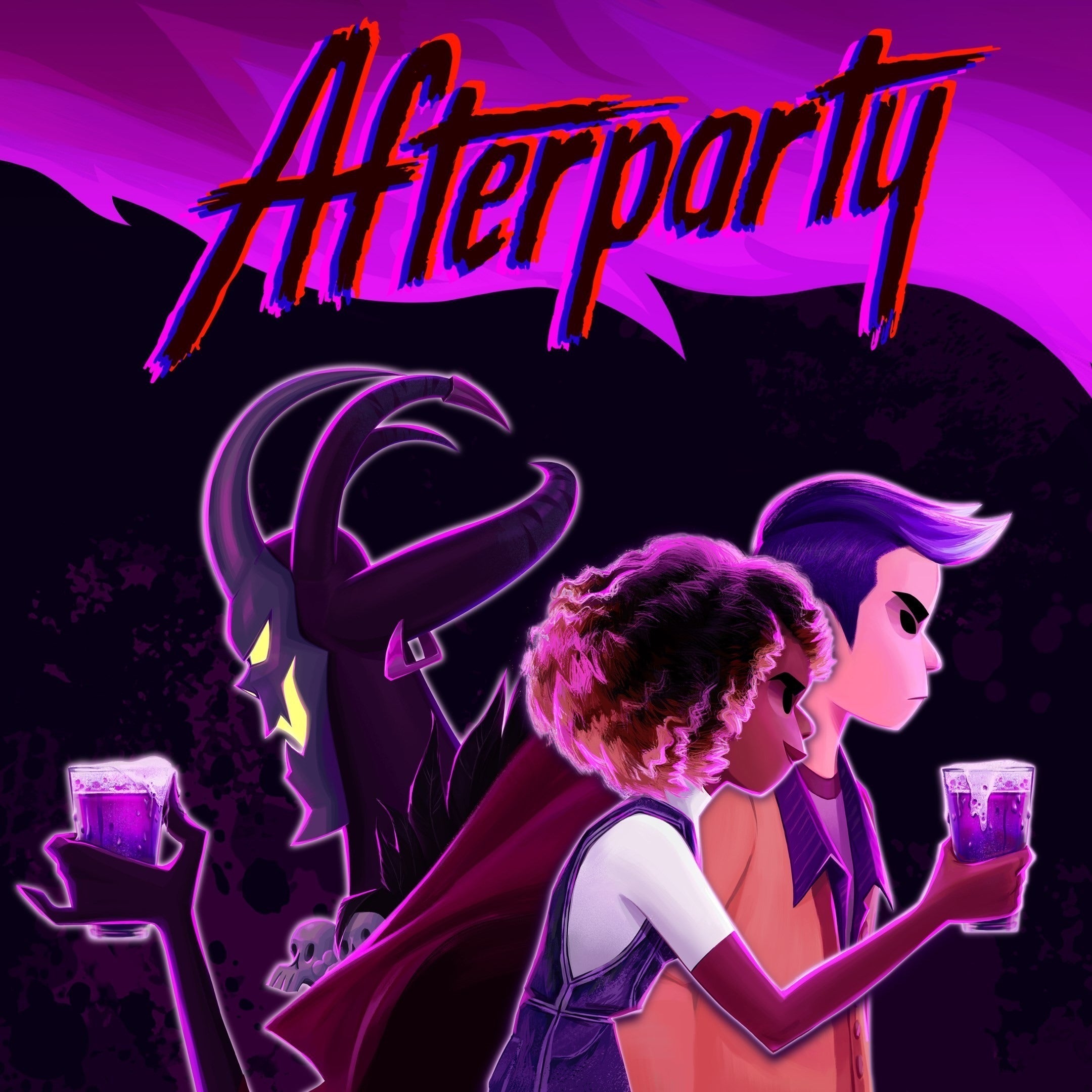