Before Super Smash Bros. Brawl shattered everyone’s minds, Mario and Sonic met on a different stage. Mario & Sonic at the Olympic Games kicked off what’s become a solid series of event based minigames, heightened by these two gaming legends and their extended casts. Though the novelty of these two worlds colliding isn’t quite as powerful as it once was, seeing the pair headlining a game together once again is a welcome sight in Mario & Sonic at the Olympic Games Tokyo 2020.

After kicking the 2018 Games off, Mario and Sonic have decided to limber up and take the world stage once again. This is likely due to both the Switch’s success and, more impactfully, the 2020 Games being held in Nintendo and Sega’s home country of Tokyo. That being the case has influenced the game in some ways, and you could almost say that the city itself is as much a star as Mario and Sonic themselves. Special events take place in and around landmarks like the Shibuya Crossing and Tokyo Tower, and you’ll be able to find bits of trivia about Tokyo, both present and past.

Back to the pixelated past

That ‘past’ bit is extra special. Joining the events that play and look similar to past Mario & Sonic titles are special retro video game inspired events. Playing off of Tokyo’s past hosting of the Games in 1964, these 2D pixelated pursuits of Olympic glory serve as a solid throwback to both the NES and Genesis, with Mario and Sonic characters from those days participating in some unique offerings. It’s nostalgia that improves the game’s lineup of events, bringing in more gameplay and visual variety while being by and large enjoyable in their own right.

Those 2D events and aesthetic are also at the heart of the game’s Story Mode. After receiving a conspicuous gift of an old game console (perfectly named ‘Tokyo 64’) and a Luigi-fueled accident; Mario, Sonic, Toad, Bowser, and Dr. Eggman end up trapped in a past version of the Olympics within the system. It then becomes a race to gather up gold medals to escape the game between the heroes and villains, while Luigi and Tails try and help them from outside the game. 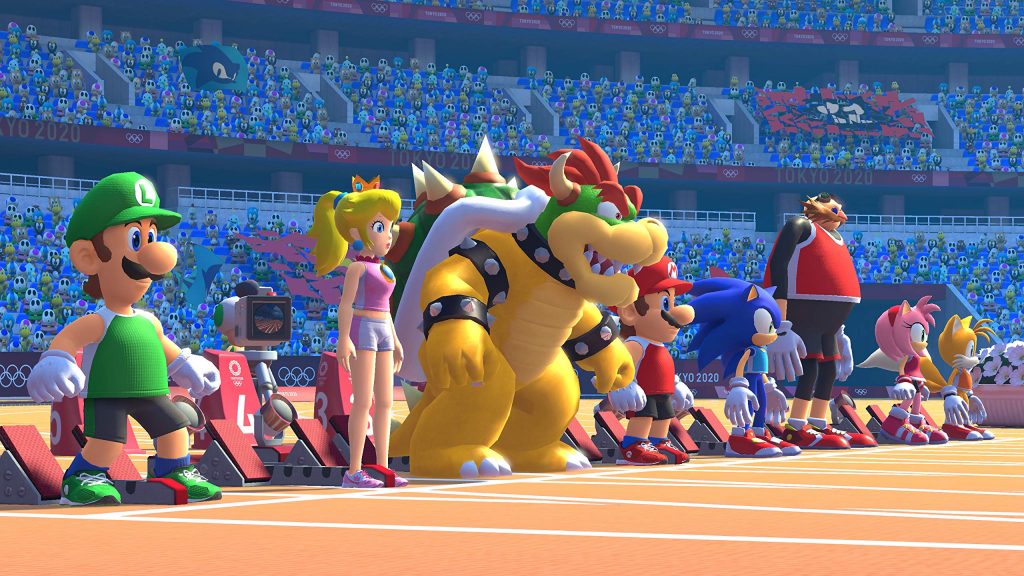 As a setup, it can get repetitive going from event to event to either secure a medal or a pass to another venue, and it ultimately just serves as an excuse to put you through each of the package’s events one after the other. Yet I couldn’t stop, as there’s an undeniable draw of wondering who’s going to pop up next and what you’ll have to best them at. There’re also plenty of unlockables in Story Mode too, from guest characters for specific events to special minigames taking place in both past and present versions of Tokyo. No other game out there is going to let you kick a rugby ball at Metal Sonic while visiting Tokyo Skytree, but here we are.

Though you’ll bounce back and forth from playing as Mario & Sonic and Luigi & Tails, the real stars of Story Mode have to be Bowser & Eggman. Their interactions with each other and the protagonists remind me of some of Bowser’s RPG appearances, and that’s a very good thing. More games need to pair these two together — if only for moments like Eggman encouraging Bowser to sucker punch and mug the heroes.

The same can’t really be said for the Bowser Jr.-led mischief that also fuels the plot, though there are some fun meta moments here and there from the rest of the cast (like Shadow and Knuckles recognizing their own popularity). To put things another way, the charm of the Mario and Sonic casts participating in the Olympic Games is still as amusing now as it was back in 2007.

Going for the Tokyo Gold

When it comes to updates to the overall formula of Mario & Sonic at the Olympic Games, characters now dress for success in most events rather than just a few. Yes, this has given the world the comparative sight of Dr. Eggman’s nipples and Wario’s lack thereof when Swimming. We also get both casts in Karate gis, Equestrian riding gear, and more. It’s just visuals, but the addition is no less amusing and adds to the Olympic vibe — overalls can’t be regulation.

As for the events themselves: they’re a mix of returning standards for the series, the aforementioned retro events, new events based on additions to the real Tokyo 2020 Games, and a few new Dream Events that shun any pretense of realism (or as real as this game can be, anyway) and go for a more fantastical vibe. As an overall package everything works, though when broken down into those categories some elements are definitely better than others. 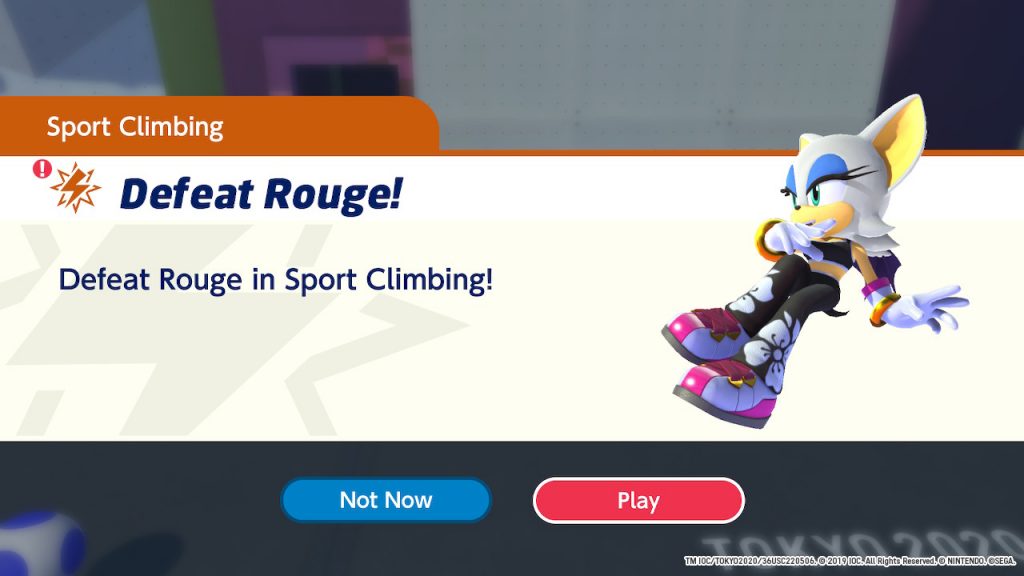 For the returning events, there’s not much to say. A lot of the Track & Field inspired selection boil down to mashing and timed button presses (or furious Joy-Con shaking if you’re so inclined) and can be over in a matter of seconds. Others, like Table Tennis or Archery, can feel more involved — and the “head to head” events (Boxing, Fencing) were probably my most favorite of the batch, especially when playing with someone else. The more team based events, Soccer and Rugby, help bring even more variety, though I’d say Rugby is easily the more enjoyable of the two — Mario Strikers this is not.

The new events are also a bit mixed when it comes to quality, but all veer towards the better end of the selections. Karate is far and away the most enjoyable of the offerings for me, playing as a (fairly simplified) 2D fighting game. If you could only play one event in Mario & Sonic at the Olympic Games Tokyo 2020, make it Karate. Sport Climbing was probably the biggest surprise, being an enjoyable timing-based ascent that I caught myself coming back to multiple times just to push my time a little further. Skateboarding manages to carry itself as well, though after several waves I still don’t have the hang of Surfing.

The Tokyo 64 events also run into some slight problems, with button mashing coming up in a handful of them. I also found Volleyball to be a tedious affair whenever I tried it, with things moving at a slow pace and lacking much impact. Shooting and Diving stand out as personal favorites here, while Kayaking might be my least favorite in the whole package (for bringing rapid control stick rotation into the mix). 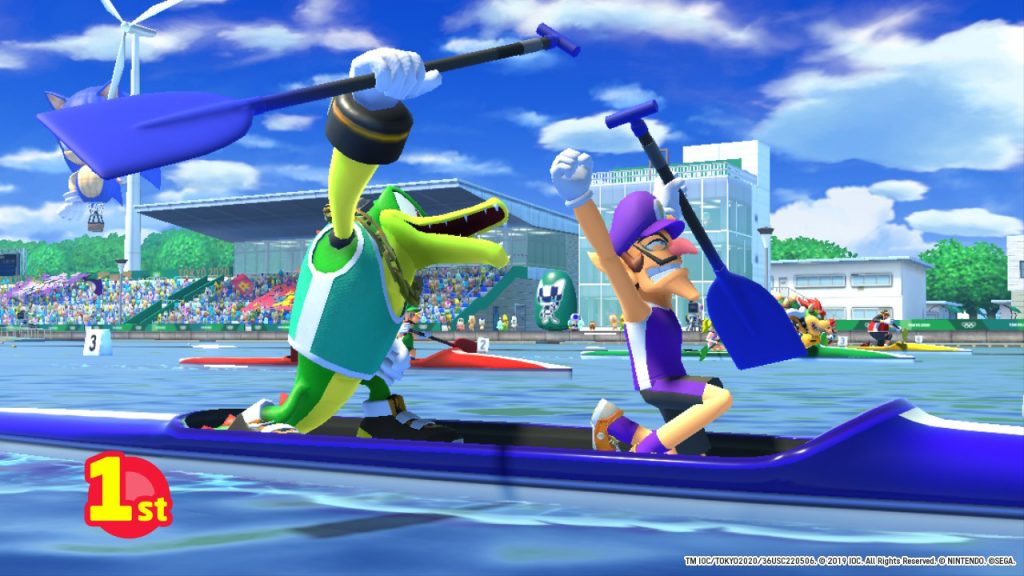 The Dream Events manage to be enjoyable all around, offering more exaggerated takes on Karate, Skateboarding, and Shooting. Dream Karate wouldn’t be out of place in a Mario Party, having four characters slug it out near Peach’s Castle to try and control as much space on the stage, claiming more whenever they knock another down. It even has items, and gave me the privilege of seeing Waluigi hold a Chaos Emerald. Dream Racing is instead a downhill skateboard race through a Sonic cityscape, with loops and grind rails. While it’s fun it does feel somewhat stiff, and there’s only the one track.

Dream Shooting is probably the most involved of the three, putting four characters in a Japanese style castle with popguns. Your goal is to get as many points as possible by shooting targets, but there are also switches to shoot to make more targets appear; and periodically large kites will fly over the central courtyard to offer up more points and gather the players into the same spot. Shooting each other stuns for a bit, so these kite-centered get-togethers are ripe for a bit of mayhem. It, along with Dream Karate, are fun free-for-alls but the overall assortment of Dream Events feels lacking.

This is salvaged by the sectioned off and equally out-there unlockable minigames (of which there are both modern and retro offerings), but they focus mostly on Tokyo. They aren’t worse off for that reason from a gameplay perspective, but it’d be nice to have a little more Mario & Sonic flair in this Mario & Sonic game — something previous entries weren’t shy about. There are throwbacks, such as to Sonic 2’s Special Stage and Sky Chase Zone, but I’m missing the likes of music arrangements and the creativity of Dream Events past.

The spirit of competition

It also bears mentioning that outside of the Story Mode, there’s no real structure to the game. You’re able to play individual events all you like, and it’ll record your best times/scores as well as if you’ve managed to earn a gold medal. If you’re unmotivated by going for these records or don’t have a group of friends to play with frequently, beyond the Story Mode there’s not a lot to do other than replaying the events again and again. Something like a tournament, tracking medals across multiple events in a single session or grouping certain events together, might’ve given the game more mileage. 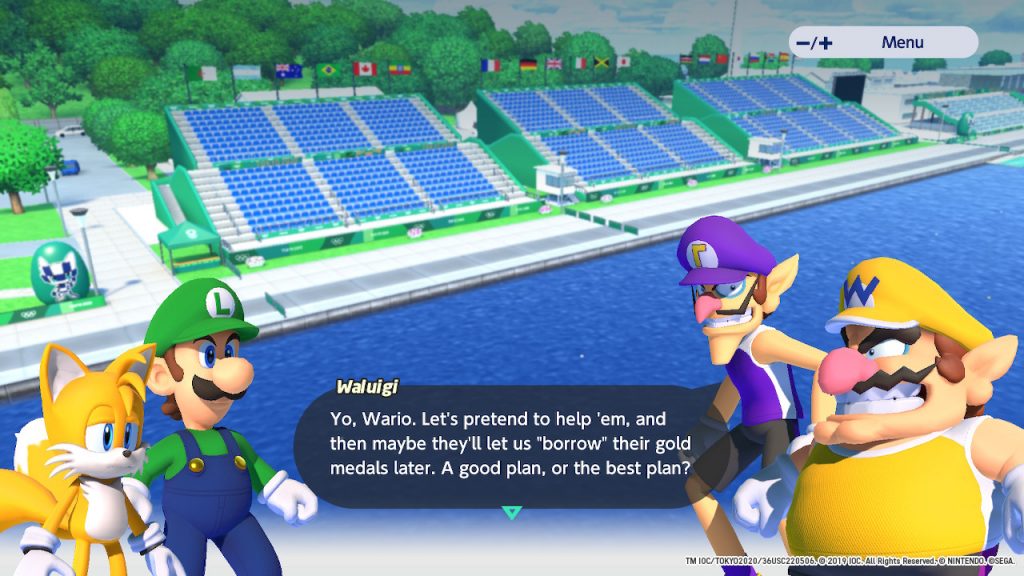 There is online multiplayer here as well though, meaning even if you don’t have friends on hand, you can still put yourself to the test against more than just the AI. While I haven’t been able to test this beyond a pre-release environment, I will say the most enjoyment I’ve gotten out of Mario & Sonic Tokyo 2020 has been with a room full of people. If you like to host parties or have family on hand then there’s a lot to love here, and it marks another great Switch exclusive.

Mario & Sonic at the Olympic Games Tokyo 2020 might be the best in its series. The Switch ensures those who’ve been waving Wiimotes around since the first time these two icons met are treated to equal parts familiar and new, and the focus on Tokyo is perfect for those interested in the city. Consequently, there’s not a whole lot of representation for Mario and Sonic’s home turf itself, though the past events manage to scratch that itch in a different nostalgic way. The game may not break new ground, but it refreshes the series with its new offerings and an entertaining story. As a pack of multiplayer offerings, it rightfully takes its place on the podium. 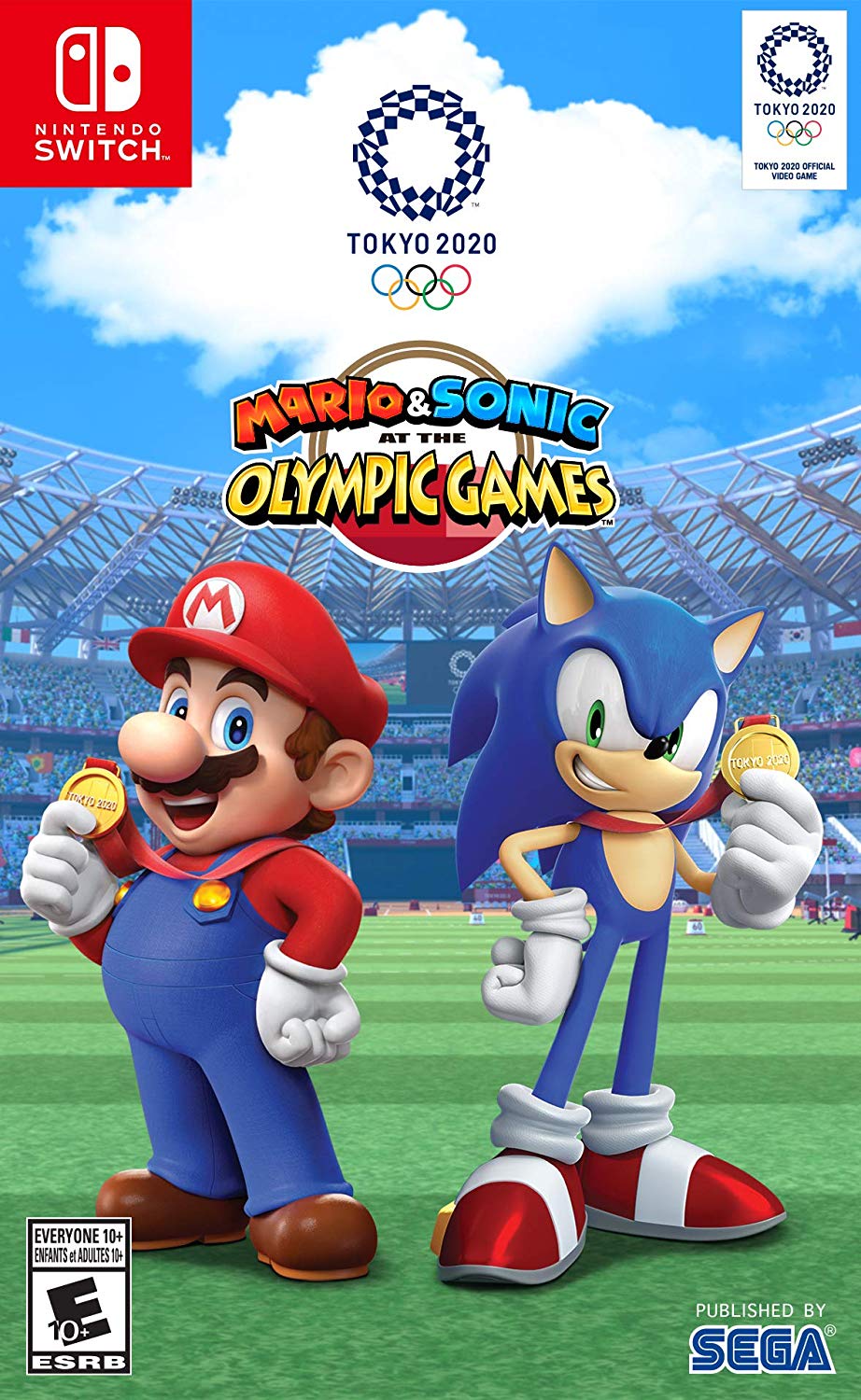