One month and zero dollars later, I can tell you why I enjoy Super Kirby Clash

It’s been one month since Super Kirby Clash arrived on Switch, and like others my initial reaction to the reveal was fairly muted. I’d already played plenty of Team Kirby Clash Deluxe back on 3DS, even paying a little out of pocket for those all encompassing Gem Apples. While I had had some ideas for improving that formula (new and more varied roles, for example), this return of the concept appeared a fairly straight retread and one I’d have no trouble passing up.

Yet here we are, 30 days later, and I’ve managed to put over 20 hours into the game since release.

Wait, Ricky — I hear you saying — aren’t you a blatant and unapologetic Kirby fan? Well yes, thank you for noticing. But I also have standards and expectations to meet. Games like Kirby Battle Royale and Kirby’s Blowout Blast have been a letdown in the past, and other sub-game returns were enjoyable but brief, or not as addicting. Yet Super Kirby Clash had me hooked for a solid month. So to what does it owe this feat?

Watching the game’s debut during the September 4th Nintendo Direct, the thing that most caught my attention was a familiar fiend from decades ago. Nightmare, the true antagonist of Kirby’s Adventure, was back as a boss for the first time since his debut. Before this, he’d only shown up in Kirby Right Back at Ya! (as the head of NME, or Nightmare Enterprises) and within a sub-game of Kirby Mass Attack. For a boss who made such a strong first impression, it’s surprising that it took HAL this long to bring him back, and thankfully his presence is a driving force in Super Kirby Clash’s Story Quests. 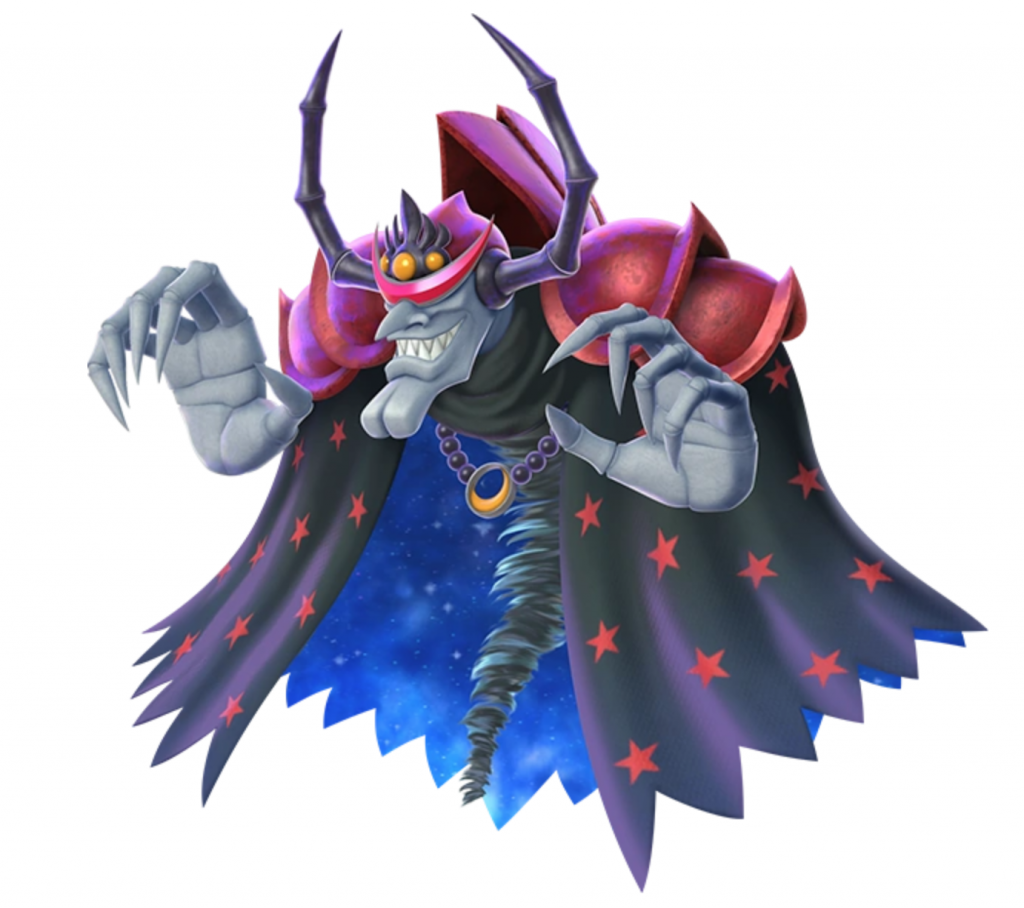 So yes, I downloaded the game mostly to see Nightmare’s return. He’s certainly not the only familiar face here, and while it doesn’t reach the callback heights of Star Allies, Super still delivers on Kirby fanservice. The boss lineup is similar to Clash Deluxe’s, mind you, with only Nightmare and a few others (including a great final ordeal) being brand new. Instead of boss variety, you’ll take on similar ones in progressing difficulty levels, or as elemental variants (turning the familiar Ice Dragon into Electric Dragon, for example) — all of which tweak their patterns and movesets.

It runs the risk of being repetitive, especially with Story being a single-player affair. Playing through it, though, unlocks the real saving grace of Super Kirby Clash: Party Quests. The biggest improvements to the formula are found here, in a dedicated multiplayer section for both local and online play. There are many more Party Quests than Story, and each of them has more Heroic Missions (fight specific achievements); and for those seeking a challenge, the later batches can deliver. 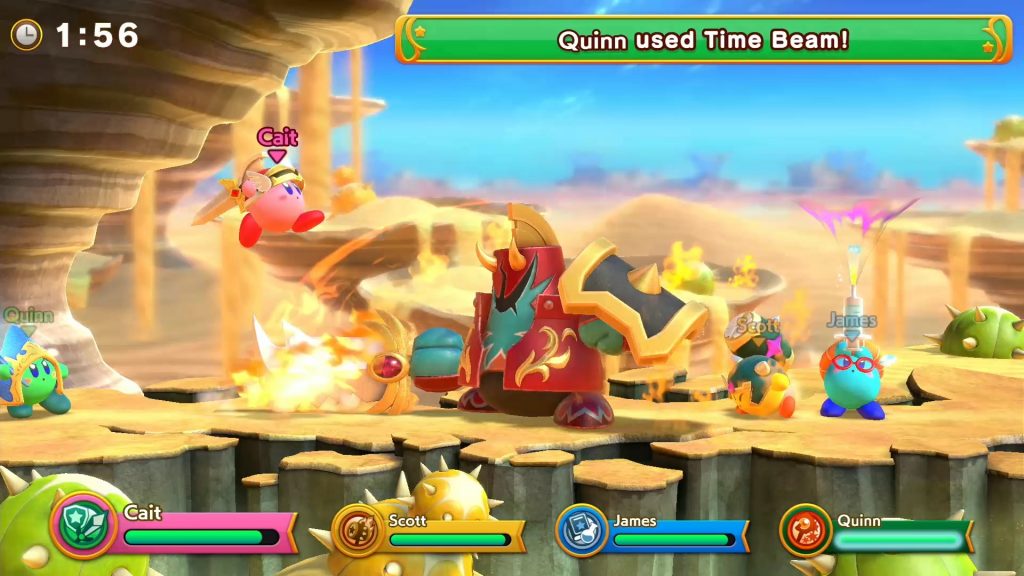 Playing with others helps keep things interesting and varied as well compared to AI, and they can potentially carry you when a boss gets to its toughest version. They also saw fit to split your stamina bar for Super, giving you a bar for Story Quests and a separate bar for Party Quests. Balancing these two led to longer play sessions; and when you factor in that Party Quests give better experience and rewards, the game is practically begging you to take it on with other players.

Dealing with those Gem Apples

Even with this added multiplayer angle, the gameplay itself is still a repetitive cycle. Fight a boss, unlock more, fight those, keep on going. Initially, my driving factor was to just see more of the game and get to fight Nightmare and other familiar foes, but as I gathered up Gem Apples I caught myself saving up for new gear (some of which is also Kirby character themed). Taking on as many Heroic Missions as possible was also a driving force as I leveled up my Kirby, raking in plenty of Gem Apples.

And that’s what this game is really all about: Gem Apples, once again, rule everything. Boss unlocks, gear unlocks, permanent buff items, and more are all tied to spending Gem Apples. That’s where the maligned microtransactions come in — and honestly, I’m not a fan of this structure to the game. Having everything centered on Gem Apples discouraged me from buying more gear, leading to a hoarding mentality until I had to improve my gear. 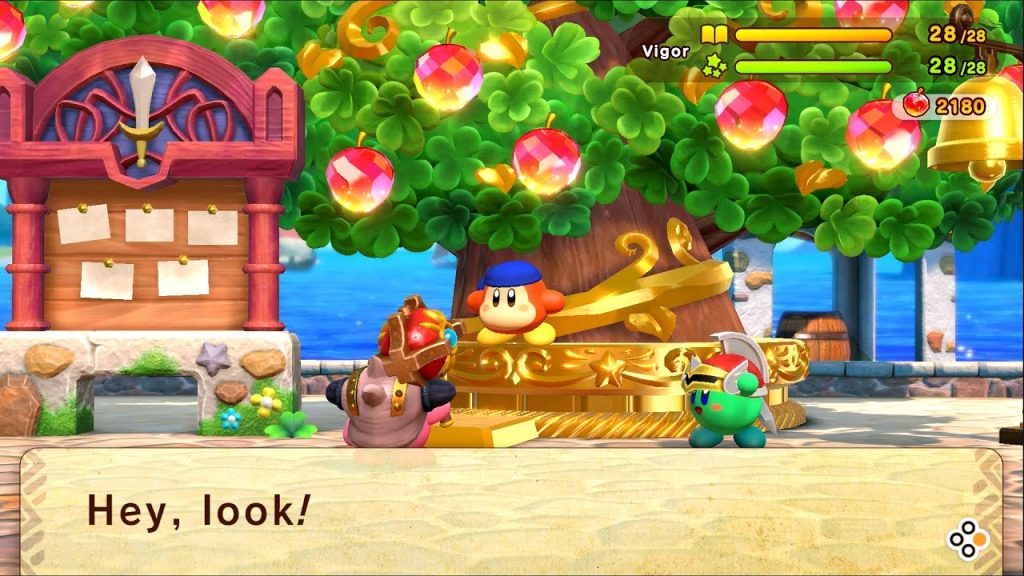 To the game’s credit, it did give me about 20 every day with no strings attached, save being on a 12 hour recharge time for the freebies. With some extra passwords giving freebies and all I managed to earn playing through quests, I didn’t feel gated until the end, where new weapons and their upgrades cost hundreds. With some adjustments to the values or the ability to earn strong equipment without Gem Apples involved, I feel I’d be more strongly recommending Super Kirby Clash rather than explaining how I managed to enjoy it.

Playing Super Kirby Clash requires playing on its terms, and after even more hours with games like Fire Emblem Heroes and Dragalia Lost and their stamina/premium currency structure, I’m used to this sort of thing. With patience, stamina management, and the help of players online, I feel like I’ve gotten plenty of fun out of Super Kirby Clash — and all of it was completely free. It won’t be replacing a core Kirby experience for me anytime soon, especially Kirby’s Adventure and Dream Land 3 both being available with a Switch Online subscription, especially with Kirby’s Adventure and Dream Land 3 being available with a Switch Online subscription. Having that subscription makes Super Kirby Clash all the better, though, so I still recommend it for fans.