Among the many items on Poké-fanatics’ list of “things that would be super cool to have in a Pokémon game” is a Gym leader for every type — the idea of breaking the mold of eight or so type masters in favor of utilizing the whole spectrum of Pokémon flavors is enticing, to say the least. And while the Alolan games sort of fulfilled the idea to a degree, it’s going to be the upcoming Pokémon Sword & Shield that realizes the dream in full, as GameInformer has revealed that between both games there will be 18 Gyms: one for each type of Pokémon.

According to director Shigeru Ohmori, the Gyms are split between major and minor leagues (just like real-life sports), and which Gyms are in which league will depend upon version. For example, Sword will feature the Fighting-type Gym in the majors and the Ghost-type Gym in the minors, while in Shield it’ll be the other way around. It’s a little unclear if the player will be able to challenge minor league Gyms right now (maybe it’ll be a postgame option?), but it seems like a fairly clever way to implement the maximum number of Gyms possible without dragging the game’s pacing down to a crawl. 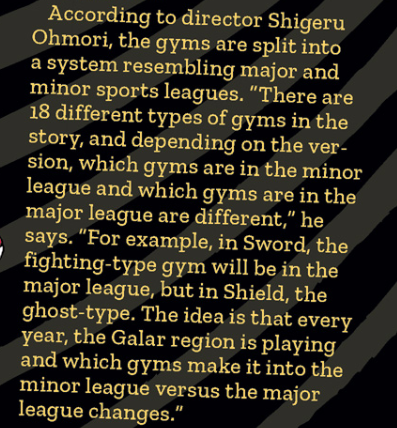 We’ll be sure to provide updates on the Gym system in Sword & Shield as they come in. Stay wired for more info as we tick down to next month’s release.