Lately, a lot of games that debuted on Xbox platforms are either already released or on the way to Nintendo Switch. Cuphead, Ori and the Blind Forest, and even Banjo and Kazooie’s appearance in Super Smash Bros. show that the Microsoft love on Switch is strong. Now, another game that debuted on Xbox is coming to Nintendo’s console-handheld hybrid: Castle Crashers Remastered. While Castle Crashers was only an Xbox exclusive for a couple of years when it launched on Xbox 360 back in 2008, its legacy is intertwined with the Xbox Live Summer of Arcade promotion that saw a handful of memorable indie titles shine. With Castle Crashers Remastered available on Switch now, you can pick up and play a technically upgraded, yet largely unchanged version of the classic cartoony beat ‘em up.

Castle Crashers sets up its roughly seven hour campaign in a pretty simple manner: villains invade the kingdom and capture the princess, and it’s up to you and friends (up to three in total) to save them and restore peace. The story is nothing to write home about, but the hand-drawn characters and fluid animations give the world a lot of personality that makes up for the lack of narrative. Plus, in a beat ‘em up like this, it’s best to get past the story and jump right into the brawling.

If you like beat ‘em up combat, then you’re in luck, because Castle Crashers has a ton of sword-swinging, arrow-shooting, and magic-casting. Each level takes you down linear pathways with hordes of enemies to fight, and the game equips you with a number of fun ways to take down your foes. Your primary weapon — which can range from swords, to maces, to chainsaws — has a light attack button and a heavy attack button. 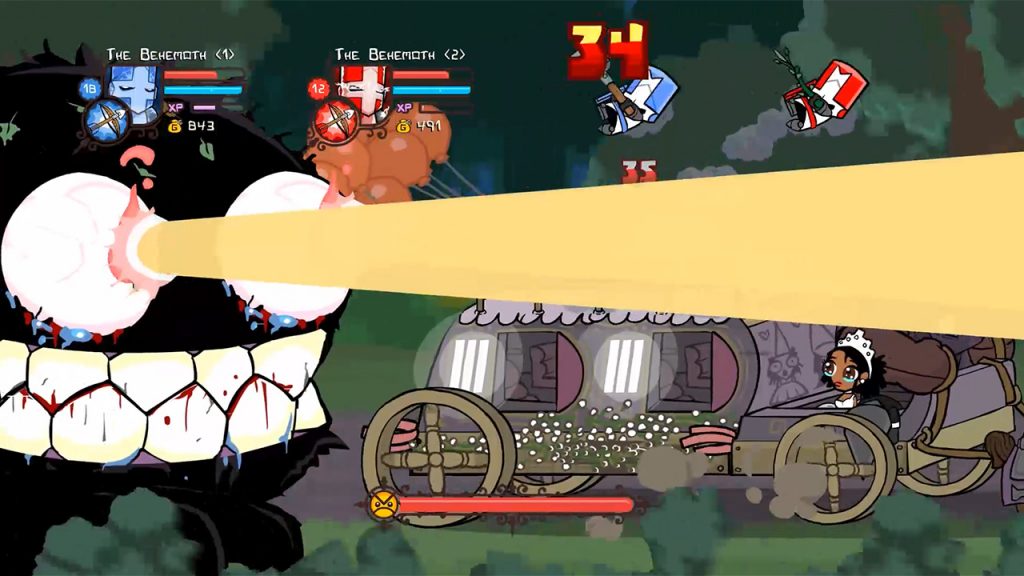 As you level up, you’ll unlock more combos with these two inputs, like a helicopter slash in the air, or a heavy slam that can damage multiple opponents. The constant upgrading is fun, and the progression system does a decent job of consistently introducing new moves. However, the best option seemed to be jumping in the air and mashing the light attack button, which allowed me to chain together around a dozen attacks effortlessly. The bow and arrow is fun to use as well, but it’s not nearly as effective as the other options.

After defeating specific bosses, your knight can employ an adorable animal companion to assist in combat. Each type of animal has a unique skill, and you can swap out in between missions to better suit yourself for the battle ahead. Animal skills can help fight enemies, but they occasionally will impact traversal and the environment. For example, the Bitey Bat chomps on enemy heads, while the Seahorse lets you move through water quickly.

The animals definitely add another interesting layer to the gameplay, and watching them follow your knight around is just too adorable. 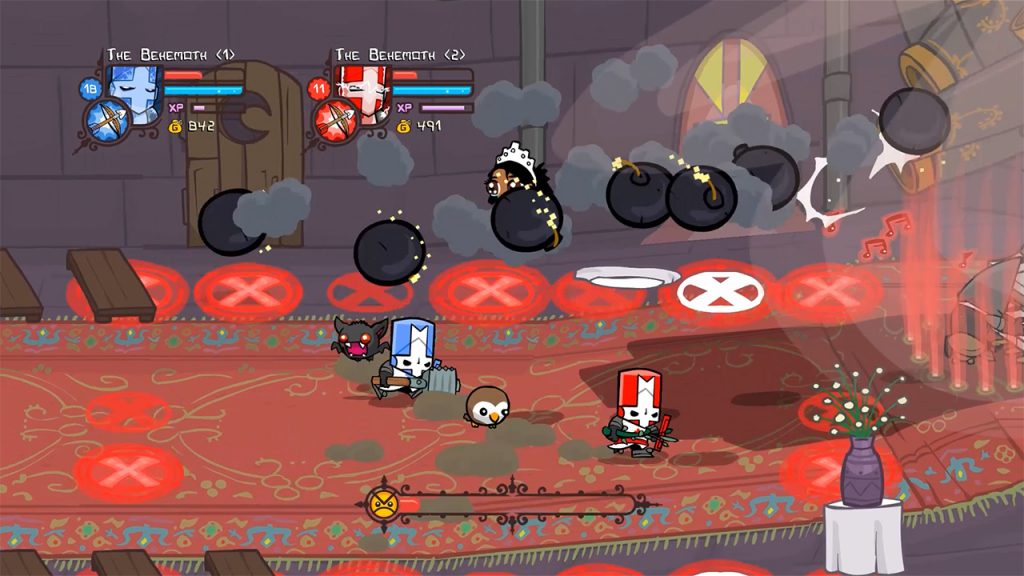 Unfortunately, combat can get stale at times, even with the constantly upgrading moves. Castle Crashers throws enemies at you constantly, and many of the enemies are damage sponges that take far too long to kill. Additionally, unforgiving checkpoints forced me way further back than any game should in 2019. More frequent checkpoints would have largely resolved the repetition, as the combat itself is generally tight and fun.

Your little knight can also use magic, which can be upgraded using skill points after each level up. The level up system features light RPG mechanics where you get to decide how your knight grows. Each time you level up, you earn skill points that can be spent to improve strength, magic, defense, or agility. Choosing skills and companions for your knight is enjoyable, and it’s even better in multiplayer.

When you add in a friend, Castle Crashers morphs from a fun, slightly repetitive brawler into a much more entertaining and addicting cooperative experience. Working together to take down enemies and bosses is a blast, and the ability to revive fallen teammates makes the difficulty a lot more manageable. It’s also exciting to coordinate your setups with your teammates at the weapon shops and animal barn to create equipment sets that complement each other. The entire campaign is playable in multiplayer, and its simplistic pick-up-and-play nature is sure to make it a popular pick on game night. I only had the opportunity to play with one other person, but I imagine it only gets more fun the more people you add. Playing with one friend solved the damage sponge issue I faced in single-player, so adding even more weapons into the fray is probably the ideal way to play Castle Crashers. 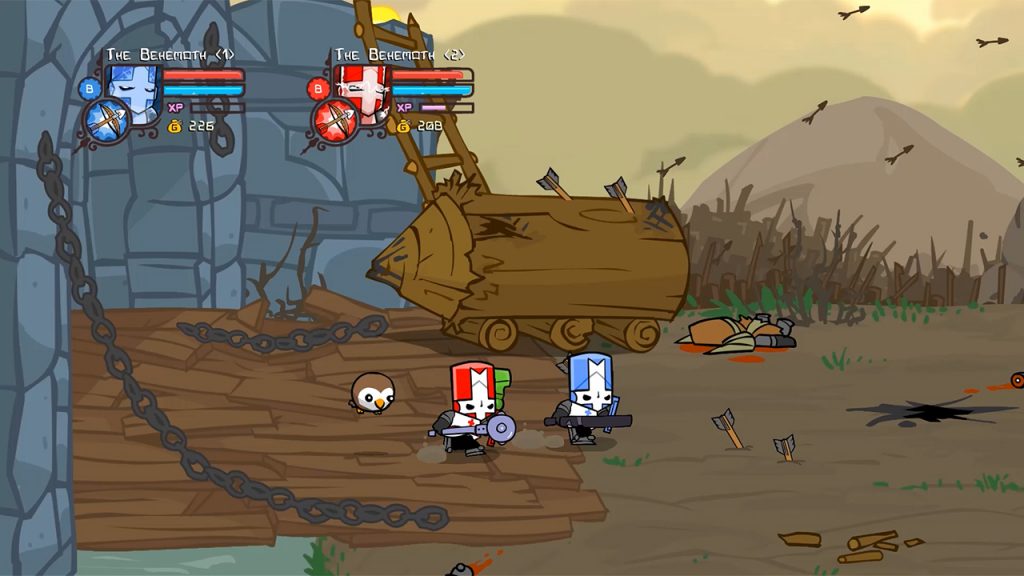 There’s also an arena mode where you can challenge your friends to PvP matches. With two people, this mode wasn’t all that appealing, as it became a game of cat and mouse with no real strategy. I can see the appeal of the mode with three or more people, but Castle Crashers is best as a cooperative experience.

Castle Crashers Remastered on Switch is a port of the remastered version that came to Xbox One back in 2015. The content here is the same as that version, meaning you get all of the DLC at no additional cost and a smooth frame rate that consistently runs at 60 fps. Speaking of performance, the game runs really well on Switch in both handheld mode and on the TV; and the art really pops, even when there’s a lot happening on screen. As for the DLC, it includes new weapons, animal companions, and playable knights. It’s nothing game-changing, but it’s great to see that the extra content was included in the main package. 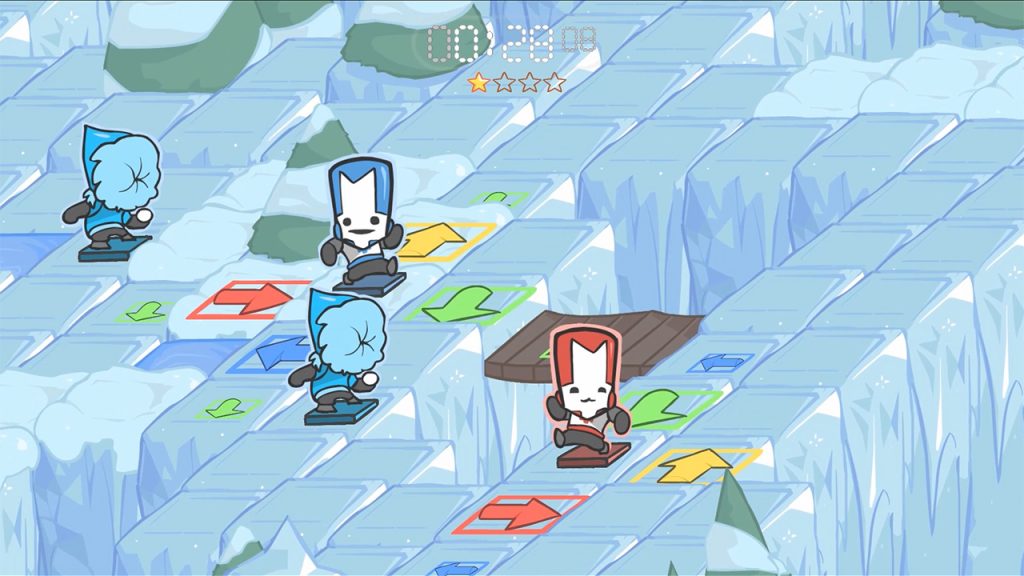 The Remastered edition also includes a new game mode called Back Off Barbarian, which can be played alone and with friends. This mode takes place on a grid-based board where you have to avoid being crushed by the enemies chasing after you. Stars are awarded based on how long you survive, and there’s an online leaderboard, too. The BOB mode is engaging for a little while, but, much like the arena, it lacks depth and you probably won’t be spending too much time here.

The Switch version supports sideways Joy-Con controllers, as well as online play. I wasn’t able to test the online during my time with the game, but still, it’s nice to see so many options to play with friends.

Castle Crashers Remastered is a fun beat ‘em up that’s exponentially better with friends by your side. The cartoony art style looks great at 60 fps on Switch, and the light RPG mechanics and adorable animal companions shake up combat just enough throughout the main missions. Unforgiving checkpoints and spongy enemies harm the single-player experience, but those issues are mostly fixed when another player hops in with you. And while the inclusion of side modes is nice, the lack of depth harms their replayability.

Overall, Castle Crashers is a colorful, creative beat ‘em up with a lot of charm, and it feels right at home on Switch. 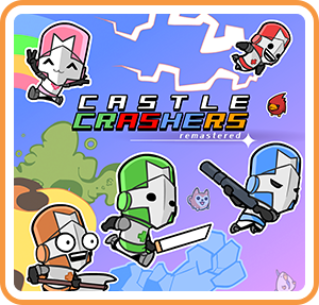