Five new characters for BlazBlue: Cross Tag Battle to be revealed on 9/21

Arc System Works has announced via Twitter that the five new characters to join the BlazBlue: Cross Tag Battle roster will be officially revealed during the Arc Live event that’s taking place on Saturday, September 21st at 6 p.m. PT. You can tune in and view the presentation for yourself on Twitch! 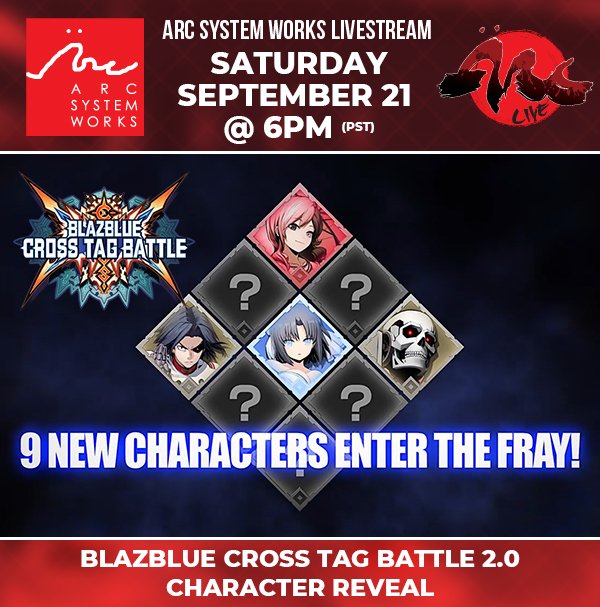 It’s been about a month since BlazBlue: Cross Tag Battle’s 2.0 announcement that got everyone loving a skull-faced tank, and while the update isn’t due ’til November, we now know when the rest of the nine additional characters will be revealed. According to Arc System Works’ Japanese site, a trailer with the remaining five characters will debut 11:00 am JST on September 22nd (or 7:00 pm PT on September 21st).

With how surprising (or at least widespread) previous picks have been, there’s no telling who’ll be joining the roster next. Could more RWBY characters be joining, or additional faces from Arcana Heart or Senran Kagura? Maybe some new fates will be crossing over as well, not to mention the fact Arc announced a new Guilty Gear shortly after 2.0’s debut… Regardless, we won’t have long to wait to see who’s coming to BBTag this November.