For a genre that’s so well defined in its name, there’s a good deal of variety when it comes to beat ‘em ups. Somewhere between the poles of pure side-scrolling action and whatever stroke of genius God Hand was lies cult classic River City Ransom. The English localization of Downtown Nekketsu Monogatari might’ve changed up names and themes to suit the US market at the time, but later releases have fully embraced the Kunio-kun series heritage.

Busting in to take that further is River City Girls, whose pixelated punchin’ shifts the focus from Kunio and his rival Riki to their girlfriends and BFFs, Misako and Kyoko. The leading ladies charge through with likability and humor alongside all the face punching, making for an entertaining experience all around. Things aren’t perfect, but the game’s presentation and co-op fun kept me going in spite of shortcomings, and it lives up to its heritage despite those scrapes.

The Girls are Back in Town

The biggest thing the game has going for it is visual flair. The art and character designs have a vibe that runs equal parts cute and badass, particularly for its two main characters. The UI has a lot going for it, from the smartphone-esque pause menu to the fact Kyoko and Misako will occasionally lean out of their own HUD portraits when discussing the game’s going-ons. It all holds the game together and made me want to meet every shopkeeper I could in River City to see more characters, menus, and items. In the design department, this one both meets and exceeds my expectations from WayForward. 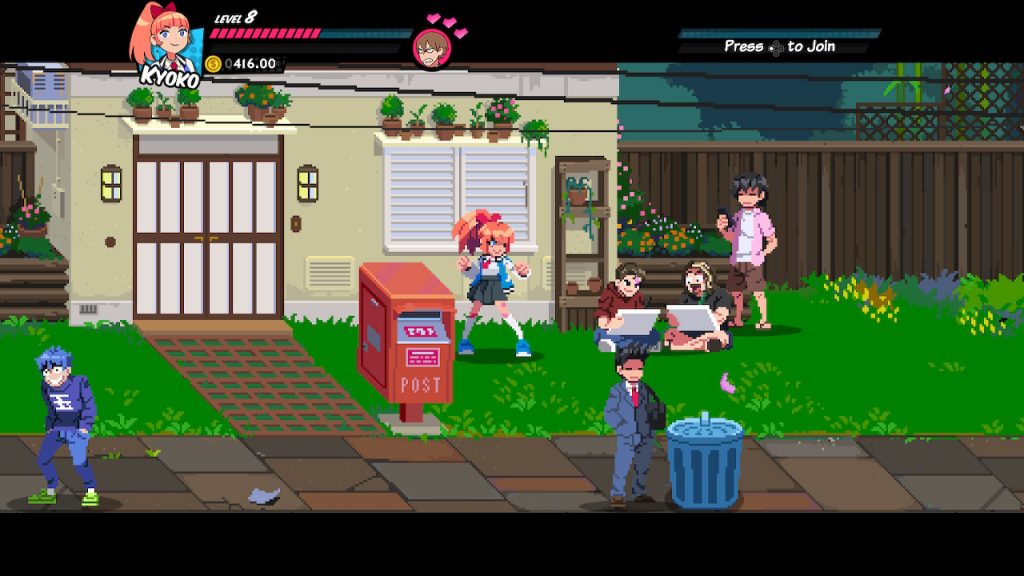 Every corner of River City is put together with the same degree of love and attention, with signs and storefronts rendered with the same detail as characters. You’ll be roaming these streets a lot (or hopping a bus to cut down on walkaround) to get through the game, for the sake of side quests or just to kick your way to more EXP and cash. Those two resources rule the game, with money in particular feeling extra precious. You can buy up stat boosts, passive-granting accessories, and even new attacks with all that dosh making any time you’re KO’d (where you lose a percentage of your savings) painful. That said, checkpoints are plentiful, as are spots to grab some food, and every time you level up your health is topped off to let you come out swinging.

Of course the main meat of a beat ‘em up is the fighting itself, and for the most part, River City Girls delivers. Kyoko and Misako are both able to learn a wide variety of attacks over the course of the game, giving you longer combo strings or more options to get through mobs. Unique here is the ability to occasionally recruit an enemy to your side, letting you call them in for an assist. These moves are often capable of doing things you might not be able to do (like reliably stunning an enemy or picking them up off the ground), or lay on a lot of extra damage (getting hit by a hammer will do that). Experimenting with them and working them into combos was a lot of fun and gives the game a unique niche. 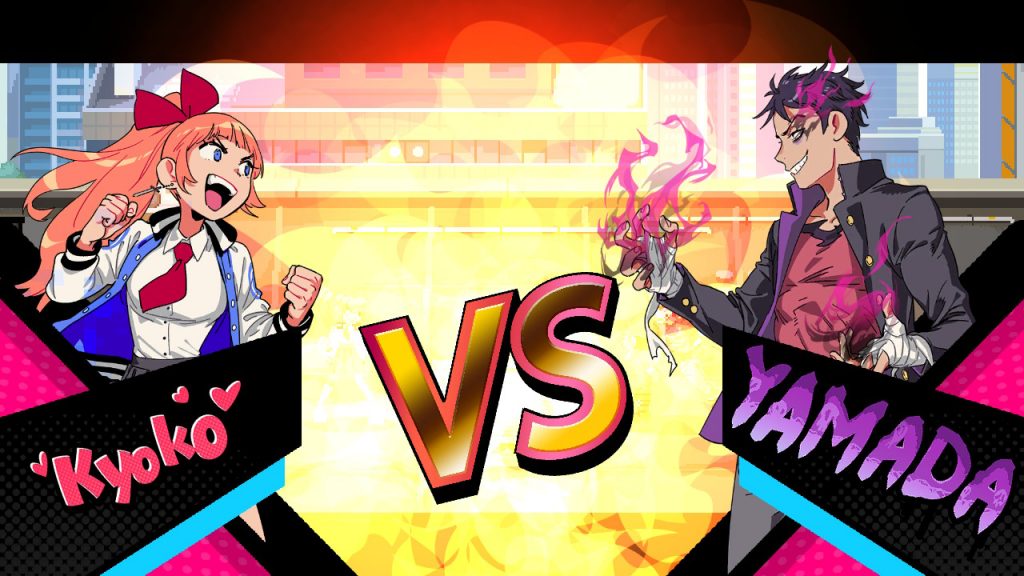 As it’s “Girls” — plural — in the title, you’re able to take on the entire game with a friend locally. Drop in play is supported as well, and on top of the obvious “four fists are better than two angle,” having a partner around is beneficial — it lets them revive you if you run out of health. This kind of game lends itself especially well to couch co-op, both in making melees more manageable and offering up even more combo potential. In that way, it gets a big recommendation, though even playing solo only really got daunting when it came to bosses or trying to backtrack on low health to buy something I’d been saving for.

A Kick to the Teeth

Like I said before though, the game’s got a few bruises of its own that keep it from being genuinely great. Transitions from one area to the next are prompted by a button press in a specific area, and while enemies never seemed to spawn near those spots sometimes the fight took me there. The button that triggers that transition? The same one for your basic attack. More times than I can remember, this would slip me away to a different area mid-combo, making all those battered enemies I was about to finish off reset while my health had taken a couple hits. It’s a frustrating occurrence, sometimes forcing me to re-fight a swath of mooks when all I wanted was to press onward and buy a crepe. 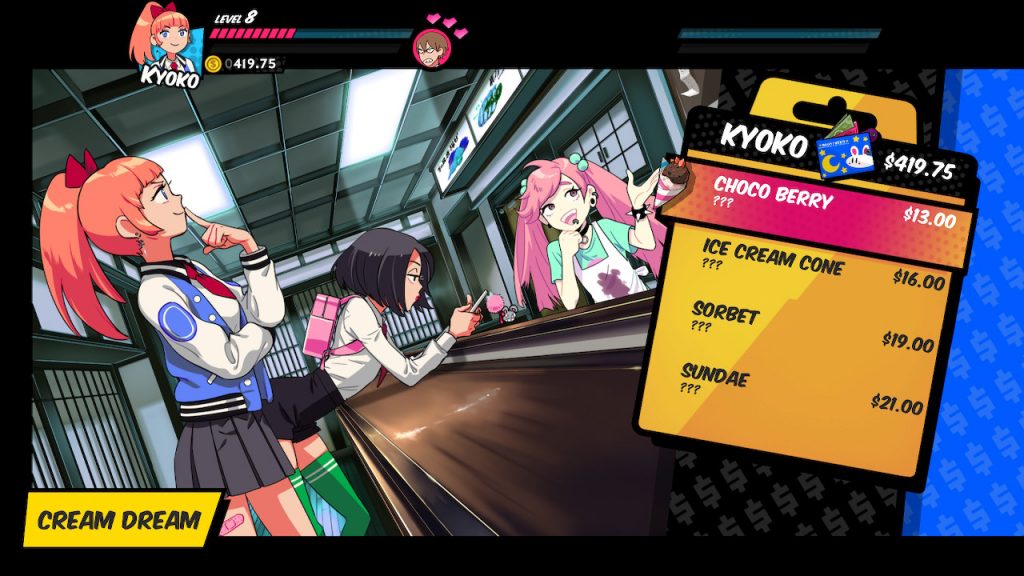 It’s not the only problem the game has, but it was definitely the most recurring. While River City Girls controls well for the most part, there were times when combo strings or weapon tosses wouldn’t work out the way I had come to expect them to. There’s also at least one attack I’ve purchased that I’ve never been able to pull off even with the in-game move list showing me its command input. It’s hardly essential, as I was able to keep progressing just fine, but having spent a lot of coin, I’d prefer actually getting some use out of it. Having something like a training room would go a long way in that department, especially if it let you try before you buy.

Speaking of wasted cash, in-game item and equipment descriptions were mostly question-marked out, keeping me from knowing what I’d be getting until I’d already gotten it. Old school inspiration is one thing, but being held back by the past is another.

Even with those inconveniences and inconsistencies, I’ve had a hard time putting down River City Girls. It has a lot of style (even if the leads get mocked for their lack of fashion sense), and I’ve got to shout out its manga styled cutscenes that are coming straight out of FLCL — they look fantastic. There are plenty of callbacks to past River City and even Double Dragon games, letting WayForward follow up on their previous work with the also awesome Double Dragon Neon. The game’s voice cast is a mix of professional talent and notable YouTubers, and that soundtrack (a mix of synthy retro goodness and vocal themes) is something else.

What we end up with here then, is a game I want to love but ultimately just end up liking. That’s by no means a bad thing, and if you’re a fan of the genre or WayForward’s aesthetic and sensibilities, you won’t be let down. River City Girls might not have the surest footing, but it still hits hard and looks cute doing it. I’ve got my fingers crossed for some kind of patch that might address some of the misses I mentioned, but even without them I can see myself still bringing a friend back to River City. 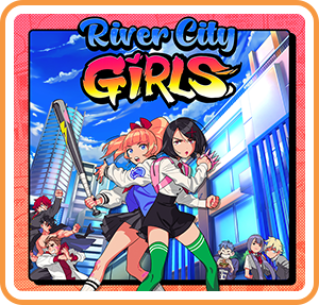