Review: Creature in the Well on Switch

Not gonna lie, I’m pretty ‘meh’ when it comes to pinball. They’re typically the most expensive games at the arcade and, more simply put, I’ve never been good at them. For whatever reason I’m the master at getting the ball to drop perfectly between the two flippers. Every time, without fail. Needless to say, it’s quite frustrating. (First World problems, amirite?)

Thankfully, Creature in the Well understands my pinball plight, taking the best parts of the medium — pings, pangs, and flashing lights -= and blending them with the action-packed thrill ride known as the dungeon crawl. What’s left is a combination of genres I never imagined could work together. In fact, it’s hard to believe there aren’t more games like it! 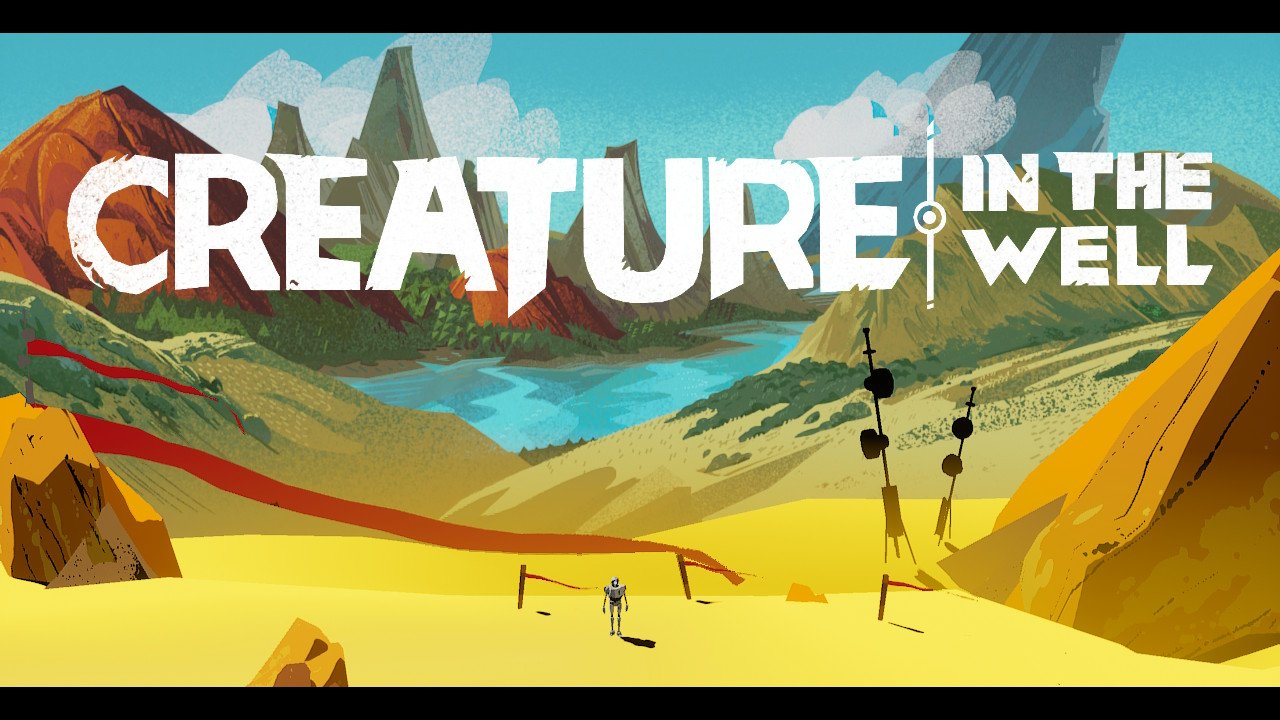 Narratively speaking, Creature in the Well does a fantastic job immersing you in its post-apocalyptic world without ever feeling heavy-handed. Players slip into the circuits of BOT-C — one of the last remaining robots of a long dormant mining facility — as they hack ‘n slash their way towards its restoration to stop a seemingly endless sandstorm. There’s just one catch: a curmudgeonly creature’s taken residence in the desert mountain and is hellbent on keeping you from powering it back up, no matter the cost.

Visually speaking Creature oozes with style. It’s isometric, cell-shaded graphics stand out from the typical palette of pixels you tend to see amongst the indie scene. Stages themselves play with different colors, setting the tone and mood for trials to come. Accompanying all that eye candy is a hauntingly atmospheric soundtrack not to be muted. In fact, the sound design is stellar throughout. Every effect from the electricity of the ball, clanking of metal, and rumbles of machinery to the sharp swing of your sword proves positively insatiable. 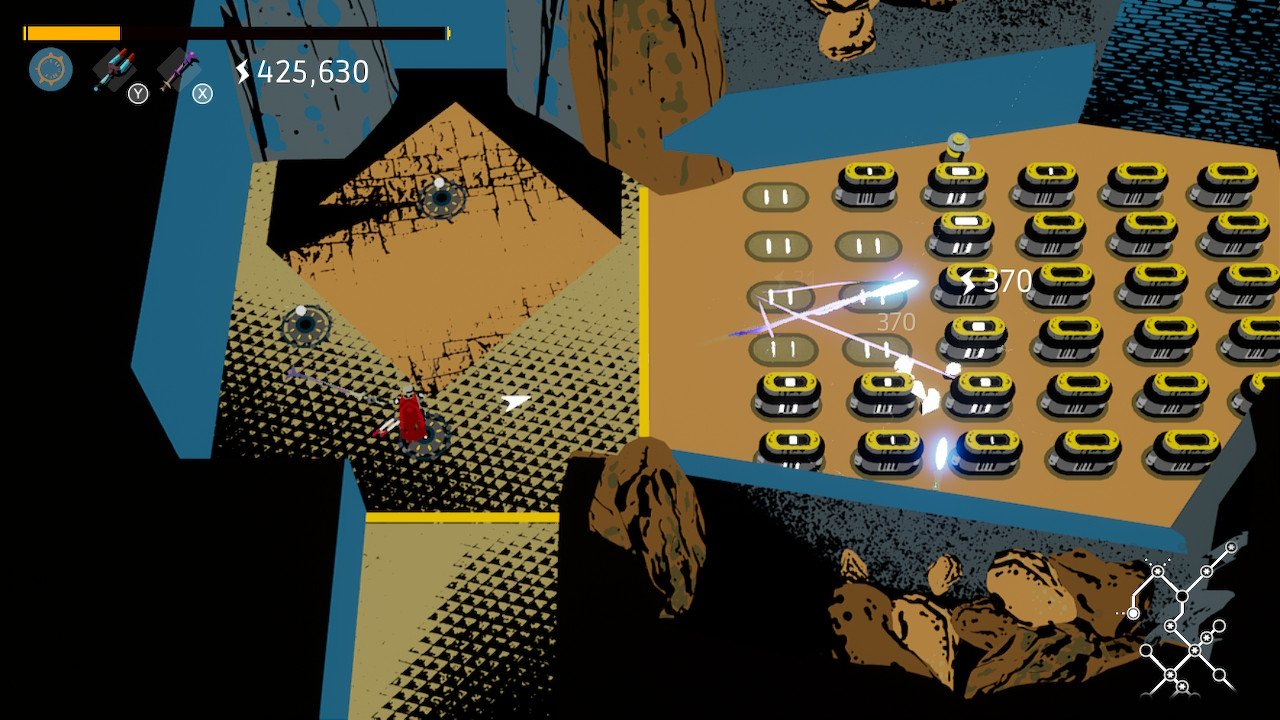 While I’m a sucker for simple stories wrapped in seductive art styles, Creature’s strongest suit has yet to be mentioned. That honor goes to its addictive mishmash of pinball and dungeon crawling mechanics, culminating in a wholly unique experience I’ve never seen done before. Coined by the developers as a “Pinbrawler,” gameplay largely consists of ricocheting balls around a room via bumpers using a giant sword. Smacking bumpers generates power, which serves as currency needed to open doors and dive deeper into dungeons.

Of course, combat is a little more nuanced than just boppin’ balls around the room haphazardly. Our robot comes programmed with three basic moves: charge, swing, and dash. Charging gathers balls in place, which allows for precision aiming with the directional stick. Once you’ve picked a direction, you swing with the sword and watch all hell brick-break loose! Dashing, of course, lets players dodge all kinds of nefarious trials and tribulations, like projectiles, explosives, and laser beams. All in all, the controls have a very fluid feel that opens the floodgates for some delightful puzzle solving. 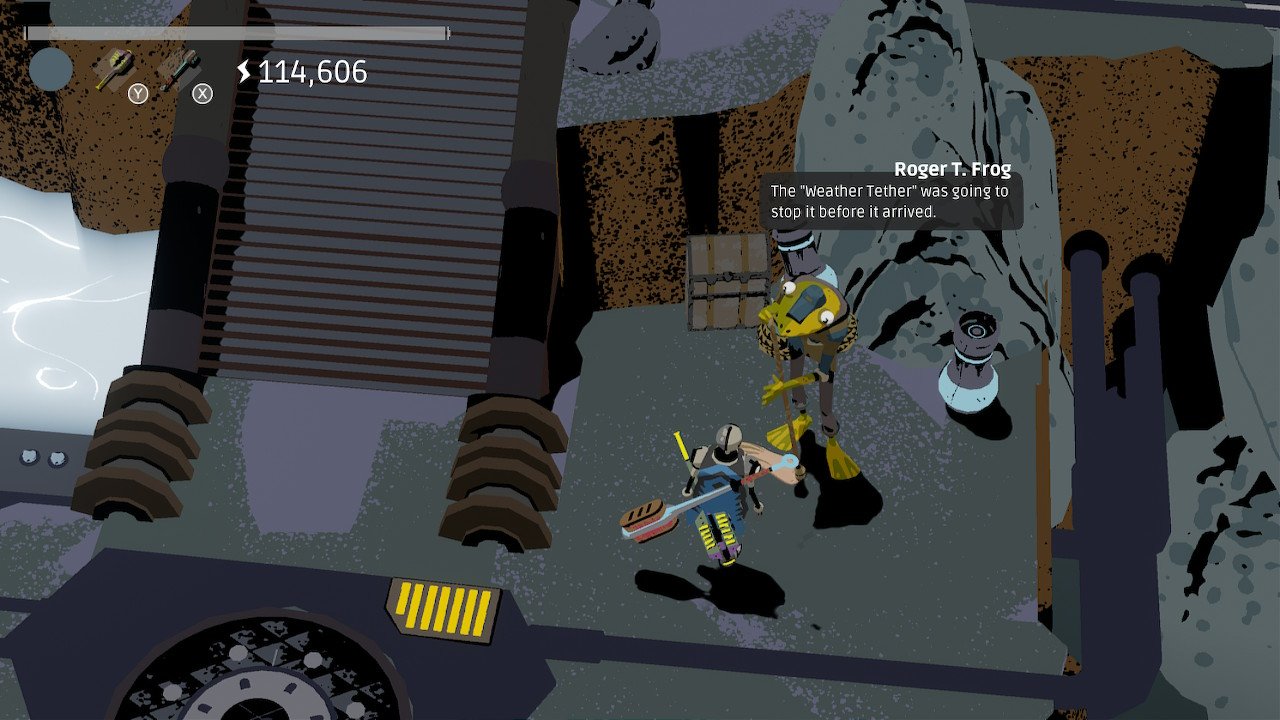 POWER TO THE PINBALL

Speaking of which, Creature in the Well is primarily designed around devilishly clever rooms to puzzle through. You’ll spend most of your time busting barriers and bumpers with impressive trick shots and ricochets, all while being shot at by turrets, homing missiles, and more. Sure, it’s not always balanced well. Some rooms you’ll spend gleefully watching the fireworks as projectiles pounce through dozens of obstacles, only to find the next is a ballet of bullet hell that’s sure to trigger PTSD in veteran Ikaruga players. Still, it all meshes together decently enough.

There are also plenty of secret areas worth discovering, each one adding useful tweaks and items to your arsenal. Battery Cores prove the most common, which let you upgrade both the number of balls and their strength when striking obstacles or enemies. There are also a myriad of strike and charge tools, from basic baseball bats and wooden spoons to hammers that briefly slow down time, or laser guided dual blades that make aiming attacks a breeze. Capes, on the other hand, are purely cosmetic, though do reveal some of the lore hidden beneath Creature’s sandswept surface.

Yet as creative as Creature can be, the gameplay loop can be tedious at times. For example, after only a couple dungeons, you’ll start to notice a lot of the same rooms and puzzles popping up, simply under the guise of different color palettes. Boss fights are also strikingly similar to each other, comprised of surviving bullet blazoned elevator shafts while driving the game’s eponymous creature back into the abyss. While the consistency in design is appreciated, more variety between stages and bosses would have gone a long way in keeping the experience fresh and exciting. Thankfully, the game’s short runtime of four to five hours kept fatigue from being too much of a problem. 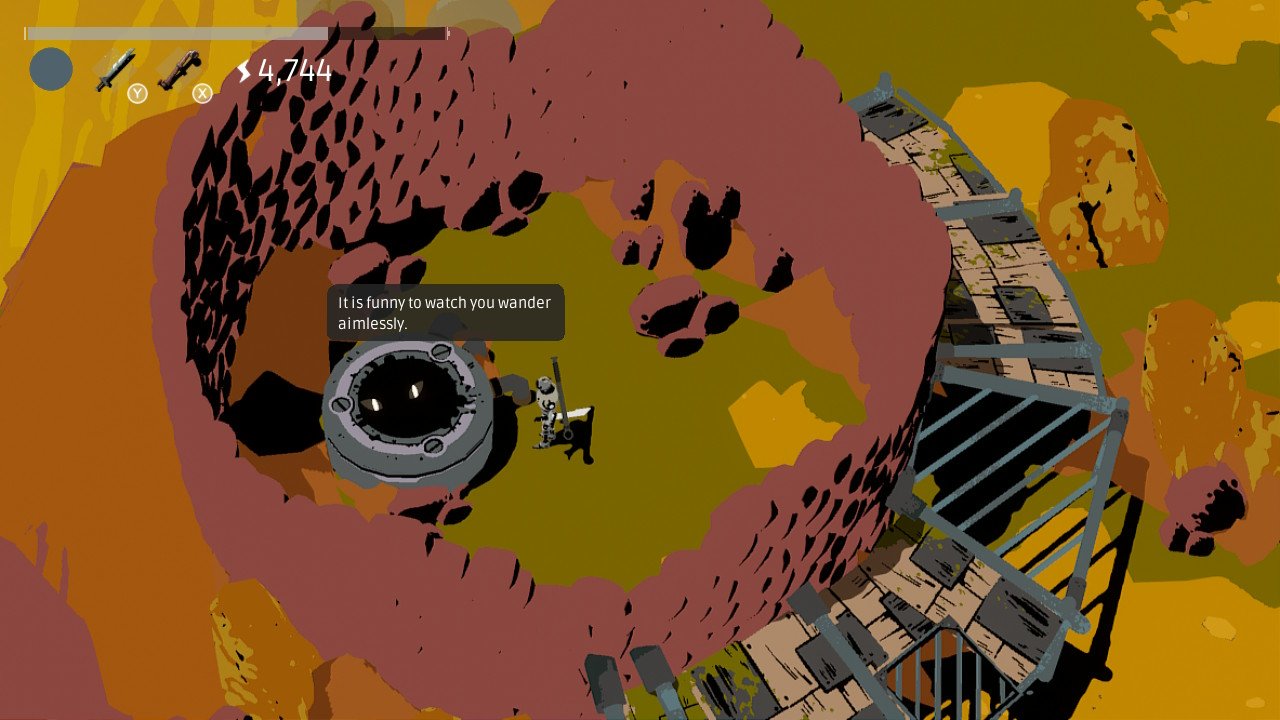 Creature in the Well is a killer concept that kept me ping ponging long through the night. While most indies take an established formula and try to perfect it, Creature breaks new ground by marrying two seemingly incompatible genres together effortlessly. Its simple story, mesmerizing sound design, and unique blend of both dungeon crawling and pinball mechanics tilt the tables towards an easy recommendation for fans of either genre, despite some tedium with repetitive level and boss design. 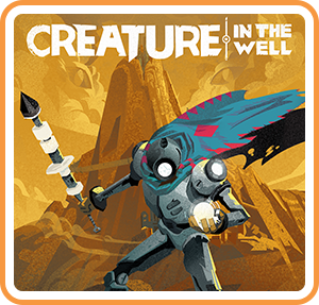