In less than 24 hours we’ll finally get a full breakdown of Dragon Quest’s Hero in Super Smash Bros. Ultimate courtesy of Sakurai himself. While it was promised that the stream would reveal Hero’s release, Nintendo of Europe may have jumped the gun, with a now-deleted tweet stating that the 4.0.0 update will land on July 31st. 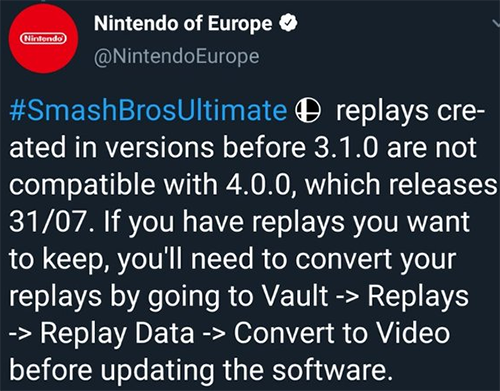 There are a few things worth noting, however. For starters, after deleting the tweet, Nintendo of Europe sent out another stating that the update would launch “within 7 days.” There’s also possibility 4.0.0 won’t include Hero, although it’s unlikely given the timing, and it could be the case that, accounting for timezones, the update will land late on the 30th in North America.

We’ll be sure to bring you live coverage of tomorrow’s stream and Hero’s launch as it happens, so be sure to check back.